Knowing what you want to be in life doesn’t come easy for everyone. Years, decades and even entire lifetimes are sometimes spent in pursuit of not only figuring it out, but doing so with purpose and intent while there’s still time.

Michelle Mulder didn’t have that problem. From an early age, the Alberta, Canada, native took to working with her hands and hasn’t really stopped today in rural Ontario. She’s channeled that passion into becoming an award-winning roofing contractor with a track record of success and a high ceiling for more — becoming Beacon Building Product’s second-annual Female Roofing Contractor of the Year in 2022. 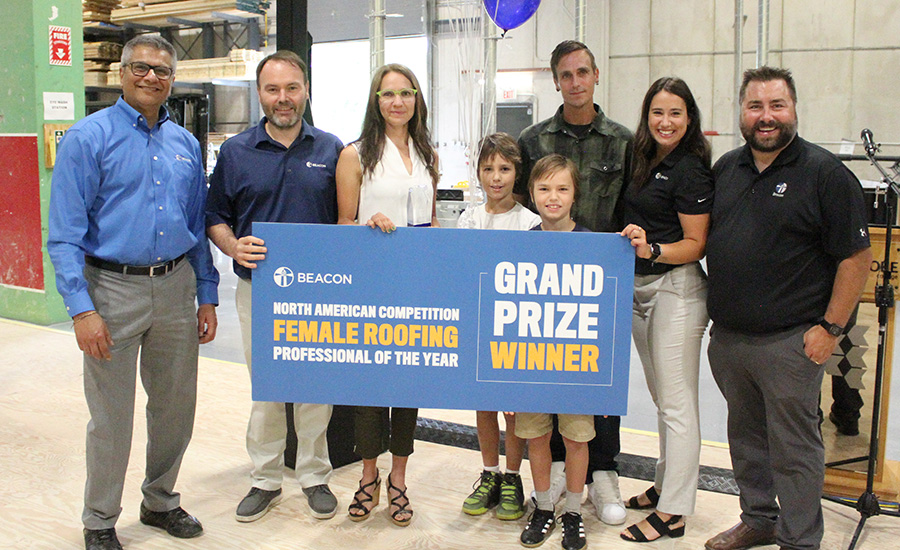 Mulder, 37, shares and operates Nailed It Roofing with her husband, Sam, in their hometown of North Bay, Ontario — about a four-hour drive north of Toronto. Yet she earned the recognition from Beacon, her peers and the public — standing out because of her passion for the rooftop and drive to be successful.

“My drive to be successful comes from my parents,” Mulder said. “My dad is a workaholic and he has always provided for us. Watching him growing up, I know if you want something bad enough you will work hard for it. It also helps that my husband is the same way and together we have a good work ethic to go after our dreams.”

To say the husband-and-wife duo relies on one another is an understatement. Sam is a roofing veteran of 12 years, and has done it all in the business. They complete every single job together — including lead generation, estimation, installation and cleanup. By staying small, they can focus less on project costs and price increases, and more on high-quality work. They’ve also diversified, carving a niche in the market for vent upgrades, winter maintenance and gutter cleaning.

The passion Mulder developed for the rooftop started in the hands-on construction carpentry program at Canadore College in her hometown. She said learning about exterior finishes and shingles sparked a curiosity she just couldn’t shake.

“After that class on my way home, I couldn't stop looking at all the roofs in my community. So many needed to be fixed and reroofed,” she said. “From that day forward I knew this was my calling. I still drive around looking at roofs that need my help, and I am happy I can provide this service for my customers.” 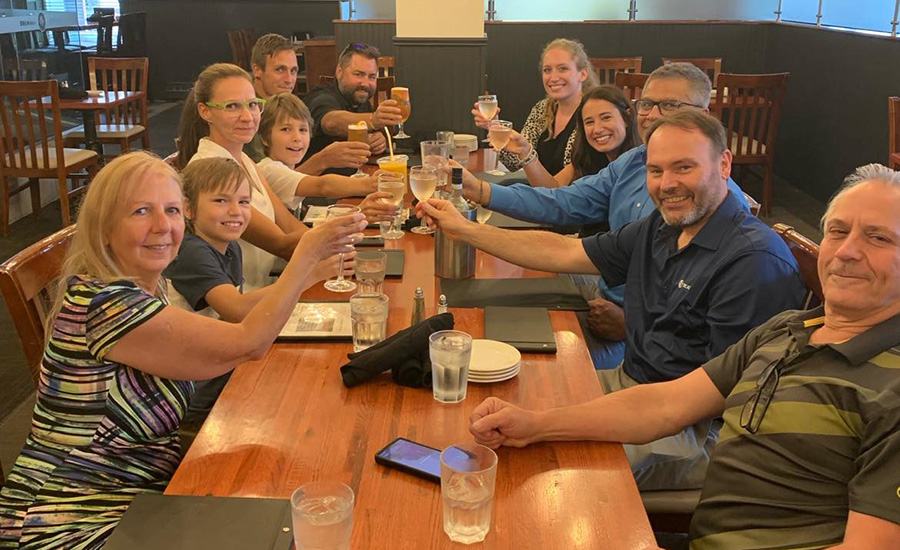 Mulder said her drive to be successful comes from her parents, saying her dad always provided for the family by working hard.

Without any female role models to follow or even visualize as successful entrepreneurs around her, Mulder took an unconventional route into the skilled trades. The more exposed she became to the art of building things, the more hooked she became. The hands-on work, creative outlet and sense of accomplishment after a finished project all drew her to the construction world.

But opportunities for women in the industry were scarce, so she enrolled in the Renovation Techniques Construction Carpentry Program at Canadore. Upon graduating in 2005, Mulder started her professional career in carpentry, framing houses and sheathing roofs.

She took on an opportunity to work for a construction company building new homes in nearby Milton, Ontario. She furthered her roofing experience there, and also met Sam, whom she married in 2014 and shares three boys with.

The combination of improved rooftop skills, precision, dare and artistry with her inner passion culminated into a business opportunity when Mulder launched Nailed It Roofing in 2015 and quickly became a force in the local market.

With her expertise in roofing development, Mulder also focused on building her business savvy. When not working weekends, she took courses in business while raising a young family. 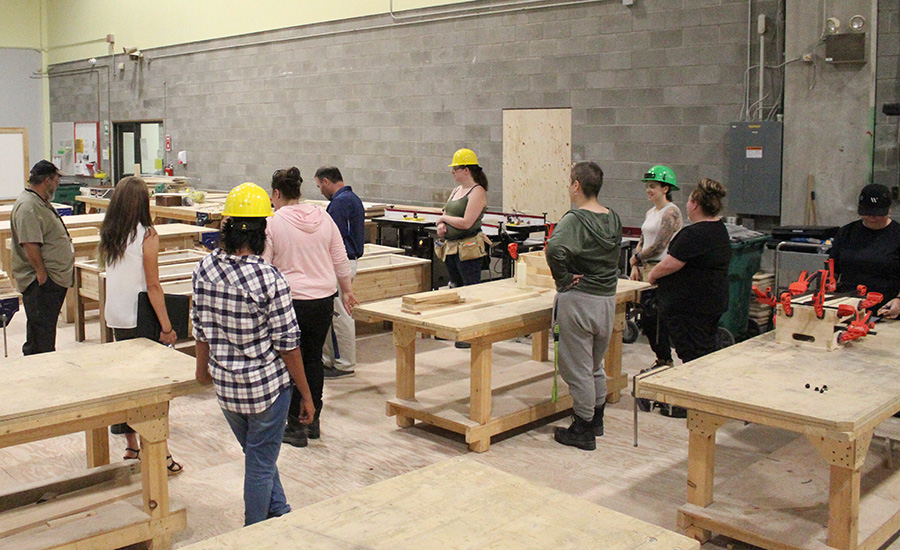 Mulder is proud to consider herself a mentor, speaking at events for women in trades hosted by Skills Ontario, an employment program funded by both local and federal governments in the province.

Mulder, nominated by Sam, was among nearly 700 applicants for Beacon’s second-annual Female Roofing Professional of the Year Award — and the only Canadian contractor to enter. After a spirited campaign to gain public support via creative and effective social media posts, she received the award and $10,000 during a special presentation at Canadore College in August.

The public vote not only helped secure the award, but demonstrated the people’s appreciation of her determination to excel at business, customer relations, and be an example for others to follow.

“The public rallied to vote for Michelle, recognizing her work on the jobsite and her devotion to mentoring young women in the community,” said Beacon President and CEO Julian Francis.

Though humble, the recognition from Beacon isn’t the first time Mulder has stood out in her market.

The recognition is also meaningful because of the opportunity it presents to recruit other strong women into roofing. 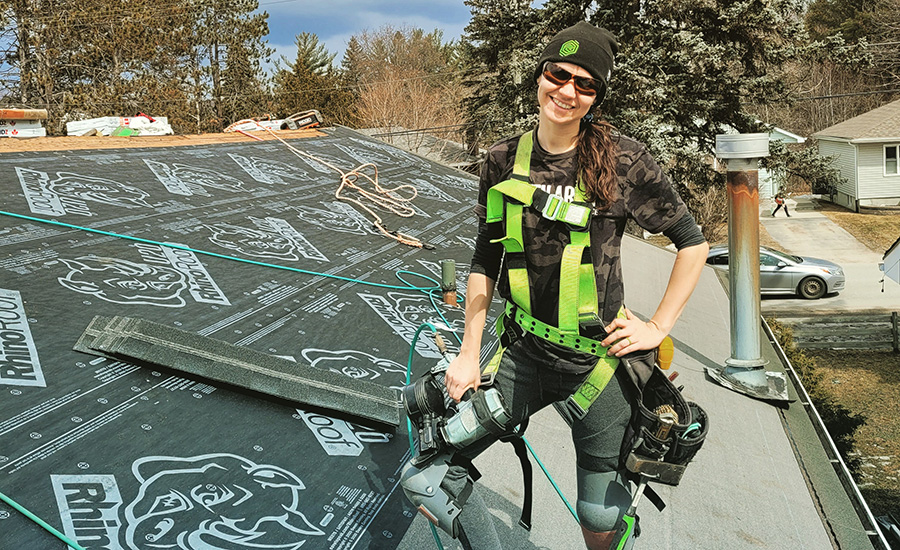 Upon graduating in 2005 from the Construction Carpentry Program at Canadore, Mulder started her professional career in carpentry, framing houses and sheathing roofs.

Mulder is proud to call herself a mentor; speaking at events for women in trades hosted by Skills Ontario, an employment program funded by both local and federal governments in the province. The goal is to encourage young women to pursue a career in the trades, and to let them know they’re not alone when they do.

She has recently been appointed a member of the Construction Program Advisory Committee at Canadore College for a three-year term.

“She is passionate that women belong and should be represented in all levels of construction,” Sam said. “Here she will share her experience and expertise to help ensure that the curriculum is up-to-date and reflects the current reality in the workplace. I know she will do great things with this opportunity.”

She said she’s thankful for the recognition and hopes to blaze a trail for Canadian women to enter and excel in the roofing industry.

“I’m grateful for the support I received from my local community and my colleagues,” she said. “It’s an honor to receive this prestigious award.”

She also applauds Beacon for its support of women in the industry and hopes her story inspires other women.

“Don't be discouraged,” Mulder said. “There are going to be hard times and doubters. Entrepreneurs face so many ups and downs, but if you strap yourself in for the long ride it is very enjoyable and rewarding.”