The Coachella Valley of California is known for many things, but rain isn’t one of them. This particularly arid area of the Colorado Desert receives, on average, a mere three inches of rainfall, and about 274 days of sunshine throughout the year.

Still, roofing is in demand. Particularly reroofing in a fast-changing housing market and climate that puts a premium on energy efficiency. Rob and Ron Winkle discovered a love for the profession at a relatively young age as they watched their older brother, Richard, launch his own successful roofing contractor business in the 1970s.

As twins, there wasn’t much they didn’t like doing together growing up in Southern California. That included working for Richard’s company as young as age 11. Once they finished high school, they started working for him full-time and became entrenched in building roofing careers over the past 40 years.

They enjoyed working together, and it was more than OK working hard for someone else — until it wasn’t. By 2016, Rob, his son, Taylor, and Ron left the company they were part of and ventured out on their own to form Roof Asset Management. Today, they see themselves not necessarily as roofers, but high-value consultants to their clients, who approach business much the same way.

That means taking pain-staking looks at every building individually, and determining the roofing system best suited for that specific building’s design. Treating their work like any recommendations their client would seek from any department head or specialist is important. So is educating the facility manager or building owners, which has become a key step in developing a business relationship built to last. Gathering as much information about the existing systems and the proposed solutions as possible is not an easy step, but can’t be underestimated.

“We pride ourselves in keeping long-term relationships with our customers,” Rob Winkle said. “We provide annual service agreements that provide an ongoing working relationship. Many of our customers have become good friends over the years.”

They’ve also done it largely based on the quality of their workmanship and the ability to cultivate long-term clients. They do very little marketing or advertising outside of local publications operated by organizations, and reap the rewards of word-of-mouth referrals built over four decades of roofing in the same region.

That approach to business and focus on quality also turns inward at the company’s four dozen employees.

“Education is a constant process in our company,” Ron Winkle added. “We cross-train our employees to learn different tasks and skills so that we can keep everyone working regardless of the type of business climate.”

The climate – speaking in meteorological terms – surprised everyone in 2019, when the Winkles say they faced their most challenging experience as professional roofers. On Valentine’s Day, Southern California's Riverside County received more rain in one 24-hour period than it had in 70 years. Several roads were closed as the skies drenched the area with nearly 3.7 inches of rain – making it the wettest day on record at the Palm Springs International Airport.

“The streets were flooded and many roofs leaked. It was not only working day and night to repair the roofs but it was very difficult to respond to many areas with the access roads closed,” Winkle recalled.

They jumped into action and enhanced their reputation by being storm-ready. Turning trouble into opportunity became a part of the company attitude that is more important than ever. While all roofing contractors nationwide are grappling with supply shortages and escalating prices, the California market acutely feels the pinch of inflationary fuel and materials price hikes. There’s also the state’s high regulatory environment to deal with.

The Winkles say their company is constantly adapting to the changing business environment. Over recent months, they are consistently negotiating material pricing and updating contracts to meet the rising costs of doing business. They are doubling-down on communication with clients and doing what they can to continue educating customers as to the reason for the escalation in costs. It’s a necessity, as many of their clients signed up for long-term roofing agreements. 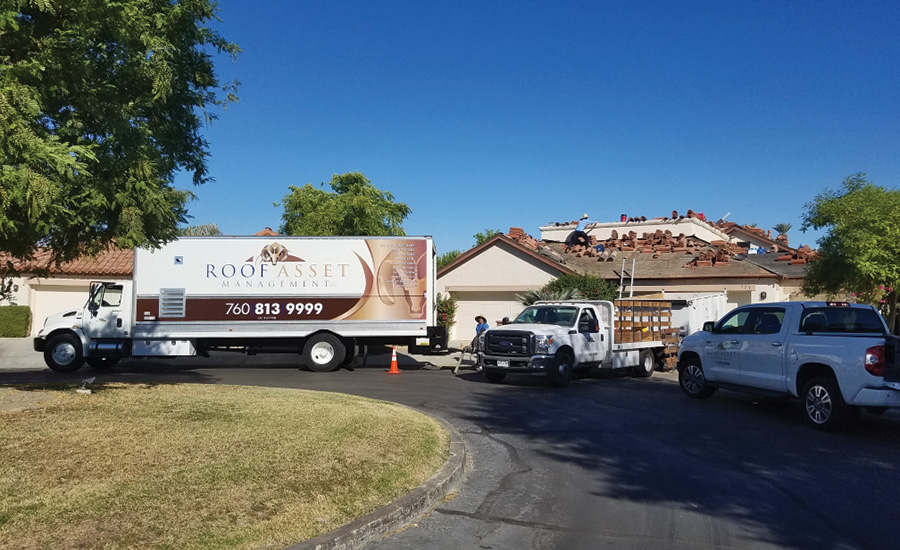 Rob Winkle has always found use for involvement in professional roofing associations. As he concludes his tenure as president of the Western States Roofing Contractors Association (WSRCA), Winkle reflects on the strong friendships he’s made, and progress he believes the industry is making in terms of profits and professionalism.

“My proudest moment was being elected to serve as president,” he said. “The board is comprised of very successful, intelligent people and the best in the industry. The former presidents have helped advance our industry and have left a legacy to be very proud of.”

As part of his work with the association, Winkle said he also wanted to address the challenge of working fairly against rivals in what he calls the “underground economy.”

“These days it is getting tougher to compete,” Winkle said. “Companies that may or may not have all of the proper insurances can supply lower cost proposals without the customer knowing the risks. The more regulations and insurance costs rise, the bigger the disparity between those contractors that supply all of the necessary insurance and those that do not.”

It’s a process that’s proving one thing to the industry, which isn’t good in the long run. The incentive to work around the system is greater than the penalties, if any, that are incurred.

The next step isn’t easy. However, Winkle believes that by getting involved with other roofers and working together with other industry stakeholders is the only way to implement significant, widespread change. He’s a firm believer that his involvement in the WSRCA not only made him a better businessman, but offers benefits far beyond cutting-edge technical bulletins, safety tool box talks to share with the crews, or free legal consultations.

“There is no price than can be placed on these benefits that would compare to the value,” he said. “We use the information provided by WSRCA in our daily business. We also belong to the Spray Polyurethane Foam Alliance. This organization supplies technical information to contractors and has a training and certification program to certify installers across the country.” 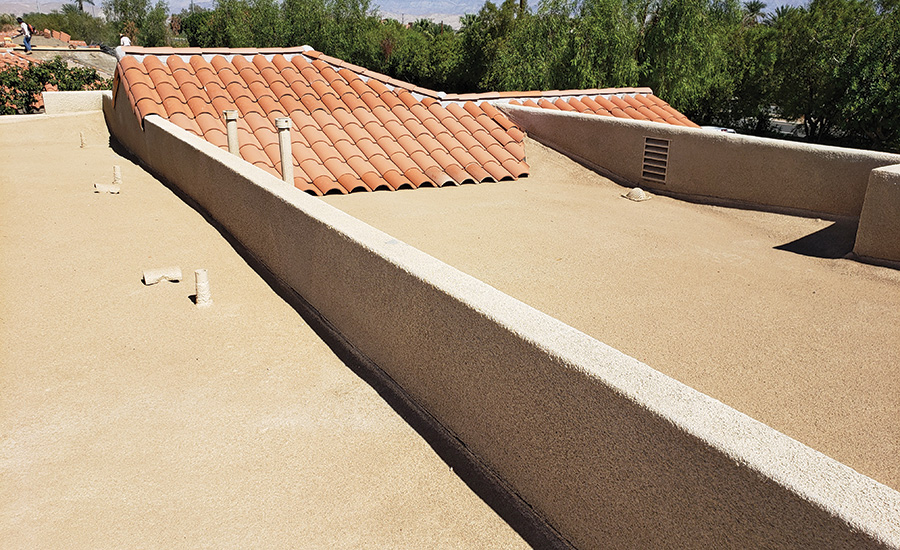 Andy Clarke likes to stay on task and get things done, whether it’s on the roof or in a meeting. His desire for efficiency and teamwork has earned him a few nicknames and titles, including “Coach” and “General Clarke.”

But it’s someone like that who the WSRCA wants in leadership, and Clarke is happy to take on that role as president in the coming year.

“I have the personality of wanting to do things my way, good or bad,” said Clarke with a chuckle. “As a board member I found myself outspoken — I want to be a part of it, I want to make sure things are getting done.”

Clarke has been with the WSRCA for about a decade and volunteered his time in numerous positions in the hopes of one day becoming president. That includes serving on the board, chairing technical committees and becoming senior vice president/treasurer. It’s a reflection of his own trajectory in the roofing industry.

Clarke’s 37-year career in roofing began as a teen in high school, working his way up to running crews by age 18. He continued working on roofs for another 15 years, mainly in the commercial sector. Unfortunately, a nasty fall off a ladder in 1994 shattered his heels, broke multiple vertebrae and one of his hands.

Normally, that’s the “a-ha” moment when someone decides roofing might not be for them, but Clarke enjoyed the industry so much that, while recovering, he trained at community colleges and worked as a consultant for a year. Once he recovered, though, he was back into the business.

“I’m definitely hands-on, I enjoy the roofing part of it, I enjoy just being out there and getting things done, working as a team,” he said. “It’s the sense of accomplishment, being able to say, ‘those are the things that we got done. Those are the roofs we completed.’”

Following his consulting stint, he became a project manager/estimator with Classic Roofing in Arizona. He climbed his way up to general manager about 10 years into the 21 years he worked there before switching to Global Roofing Group. It was there he earned multiple executive positions, including regional vice president and vice president of pre-construction.

However, he said the direction the company was heading didn’t align with his own path, and in December 2021, Clarke joined Tecta America of Arizona as assistant general manager, where he says he’s focusing on processes, efficiencies and how to grow the branch.

“For me it’s a new challenge of recreating a whole new team, where are we going to be in the next five years — more of the big-picture points of view and what we can do to improve efficiencies from the office all the way out to production,” he said.

He aims to help the WSRCA accomplish similar goals during his tenure, saying he wants to maintain some status quo while seeking improvements during these tough economic times.

“In the current market we’re dealing with today, and the risk we’re all as contractors living with, is probably financially greater than what we’ve ever had to deal with in the past because of these ongoing material supply issues, ongoing cost increases and more and more legal issues,” he said. “The best thing we can do is be proactive to help the members identify their risks, help them mitigate those risks.”

Specifically, he said it’ll be about helping contractors protect themselves, such as through contract language and how proposals are written. This includes ensuring members are educated on using subcontracted laborers due to the workforce shortage.

Winkle said he’s looking forward to what Clarke and the next group of association leaders can accomplish, especially with WSRCA Executive Director Joel Viera and experienced staff also at the helm.

“The association is in fantastic hands,” he said. “Andy Clarke will make a terrific president. Andy's love for the roofing industry is obvious with his outspoken commitment to the association. He brings a passion and knowledge of the business that is infectious.”

Outside of the roofing industry, Clarke has enjoyed teamwork as a youth coach for 22 years, including coaching his kids in sports. Two of his children work in the roofing industry, so as he takes on additional responsibilities in the WSRCA, he knows he is working to improve the industry for members, colleagues and family alike during tough times.

“We’re just having to keep our guard up and look at worst-case scenarios,” he said. “We’re all finding ourselves having to be very creative, I think that’s really the key, you have to be creative, but you also have to be very aware and responsible for your creativity.”