For all the success they’ve had keeping water out of other people’s homes and businesses across the Heartland and deep South by leading Precision Construction & Roofing for the past 14 years, Eric and Mika Hunter might never have met if not for rain.

It was a cool fall day in North Texas when Hunter and others from the roofing company they worked for paused from knocking doors as the sky opened up. Looking for public shelter and a quick bite, they found the closest bar and settled in to wait out the storm. Hunter, however, was never ready to leave. Not alone, anyhow. Working behind the bar was the woman Hunter would eventually marry, and would serve as the inspiration — and determination — to start their own company.

“I was out training two guys on how to go door-to-door, when it just started to pour,” Hunter recalled. “We walked in, there she was, managing behind the bar … and I told her: ‘You have me.’ And that was it. That’s how we met.”

A whirlwind romance that followed also blossomed into a formidable business partnership. Fourteen years later, Eric and Mika Hunter are still going strong and growing a perennial Top 100 roofing company from their headquarters in North Richland, Texas. Precision reported $78.5 million in revenue during a very challenging 2020, good for #22 on this year’s Top 100 list. Their success is due to many factors, but Hunter boils it down to two things: a passion for roofing, and Mika.

“This was her idea from the start … launching a roofing company with my dad,” Hunter said, recalling the counsel she provided about a month into their marriage. “Literally that same day we came up with the name Precision Construction & Roofing.”

The day after that, Hunter said they rented a 400 square-foot office space, filled it with folding tables, chairs and a fake plant — which they still have — and they were in business. Hunter had been in roofing for about a decade prior, and had a penchant for sales. While he handled the production side and most of the hiring, Mika handled everything else from operations, accounting, licensing and regulations, etc.

“I knew his value, especially when we started, was selling,” Mika Hunter said. “That's what he's good at and at training the salesmen. So I’d try to do the things that would make life easier and took that stuff off of his plate. And I did them to make my life easier, truthfully.”

The region’s volatile weather drove the business, and within a few years they had a sales staff of 20 between headquarters and a branch office in Oklahoma City. After being around the roofing business with a few different companies, Hunter said he began to see the practices he liked and didn’t like, and tried to steer clear of decisions that were dragging both the quality of work and customer satisfaction down.

“My wife, father and I started this business and built it on doing things right,” he said. 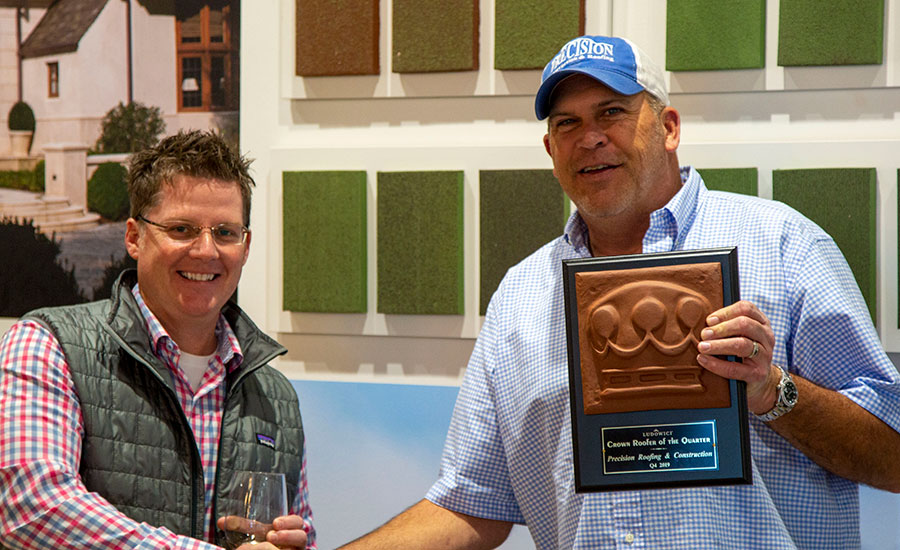 Precision has earned Roof of the Year from Ludowici Roof Tile multiple times for its high-quality work.

Hunter was raised in Lubbock, Texas, and said he put his first roof on at age 13. He got his start professionally in 2000 during some serious hailstorms in Nebraska. The housing landscape in communities surrounding Omaha was dominated by wood shake, and there was a lot of asbestos, Hunter said. Just about anything with hail damage needed replacement and there was a lot of fertile territory for a personable salesperson.

But Hunter took special interest in the ornate and elaborate tile roof systems he’d see on large churches and high-end homes while knocking on doors in storm-affected areas. He came to two pragmatic conclusions: The jobs weren’t just beautiful — requiring the skill of trained craftspeople conscious of their effort — but they also didn’t come cheap. And while the traditional shingle work kept the competition busy, there weren’t many, if any, going out of their way to focus on this market.

Hunter quickly developed a business model where focusing on those particular projects, while not as plentiful as traditional composition shingle roofs, yielded higher profit margins and a lot of referrals. And he’d obsess about getting those jobs. Behind his desk today hangs an aerial photo of a $1.8 million residential roof install that earned Precision the 2016 Roof of the Year from Ludowici Roof Tile. A job that he had to jump a security fence — consequently ripping his shorts — in order to win.

“That’s his passion, right there,” Mika said. “He can jump the fence of a billionaire and go up to the door and sell, no problem. But watching him try to sell a composition roof to a homeowner was almost hilarious because he doesn’t know what to say.”

That’s why he knows it’s important to have good people working around him. Roughly six years ago, Mika restructured the company into residential, commercial and maintenance divisions, and they hired a multi-media specialist with extensive background in video production to help develop eye-catching marketing collateral and enhance customer relationships. Precision has won that award from Ludowici five other times in a long-standing relationship with the Ohio-based manufacturer.

The company has excelled at sales and it starts at the top. Hunter’s father, Richard, sold insurance and owned a brokerage house before Eric pulled him into the roofing industry full-time. He still comes in and closes deals, at a spry 84 years of age.

“He’s the definition of true grit,” the younger Hunter said. “He doesn’t like to sit around and I don’t either. I’ve been sitting at a desk more now than I ever have in the last three years. And I don’t like it.”

But the business is growing as a result of the work he’s putting in from that office.

Precision is now a mobile company that can actively roof in 30 states. Hunter says they’re completing more projects than ever before, and their sweet spot is to produce between 300 tile roofs and up to 800 total roofs in a year.

Their agility also means Precision crews can affect a market immediately. Particularly ones in need of help. Last year, the company mobilized crews to respond to disaster areas following the derecho storms in Iowa and Illinois, as well as Lake Charles, La., following hurricanes Laura and Delta. After the devastating storms, they rented a tour bus for their crews to use as housing and parked it in a church lot while the recovery process started. There are several projects still underway in both regions that still won’t be complete for another six to eight months, Hunter said. 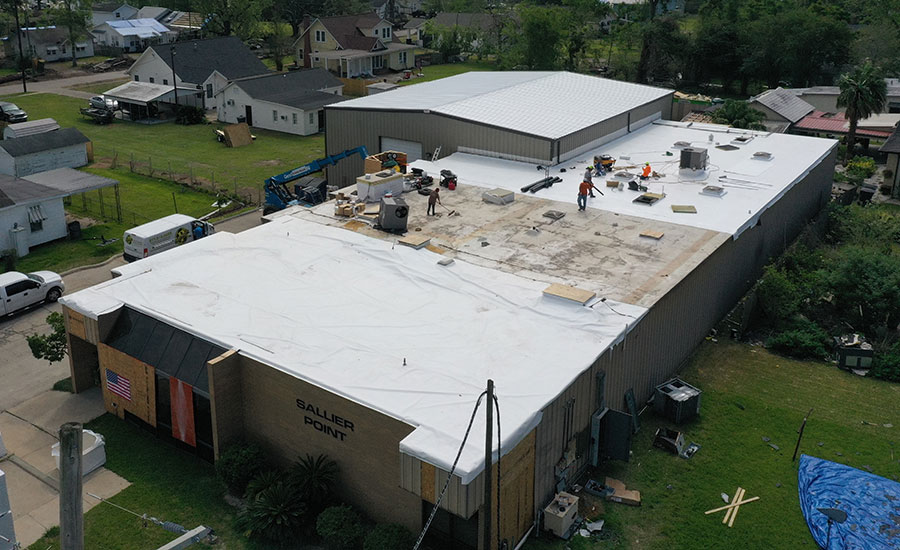 Last year, the company mobilized crews to respond to disaster areas following the derecho storms in Iowa and Illinois, as well as Lake Charles, La

The Hunters aren’t slowing down.

Precision is about to move into a new headquarters in the Metroplex with a four-acre yard, warehouse and soon-to-be completed two-story office building. Inside will be a large showroom, conference rooms and individual office space for dozens of employees.

“I think it's going to give everybody a huge breath of fresh air, you know the day that we're all in there it's going to be kind of like a mini new start,” Mika said of the new space.

“I’ve been asked to speak at roofing conferences and can go on and on and on about historic slate and tile, and I can also go on and on about real aspects of our business, but we need this to be about women and real women issues, and what it takes to be a women business owner,” she said. “Obviously there are going to be roofing and business issues to work through, and but I’m working on more like the health and wellness and finding balance in life.”

Finding and achieving a balance between personal and business life will be a challenge for the next couple of years as they continue to focus on growing the company. But the Hunters say they’re committed to the roots of their relationship and doing the things that got them to this level of success.

“I’m not telling people to jump fences, but sometimes it's knocking doors for an extra hour a day. Or it's taking a chance that you probably shouldn't have that makes all the difference,” Eric said. “But jumping that fence sold me the biggest roofing job of my career, to this day, and right there made my dream come true.”

Granted, it’s been a while since he’s jumped a fence to get a job, but Hunter said he harkens back to watching his father still go at it after all these years.

“He sees smiles about it. He doesn't need to go out and do it, but it's the joy of doing the thing he loves to do,” Hunter explained. “I always tell people I’ll quit the roofing business when it's no longer a hobby. I think this is a hobby, not a job. I love it.”