There are some roofing contractors that made the most of the "pause" — voluntary or not — caused by the COVID-19 pandemic to re-evaluate their business and decide how to move forward. And then there's Travis Hawkins.

For more than two decades, Hawkins learned the roofing trade first-hand from his father, Dale, at Tri-County Roofing, which has kept households and businesses dry for nearly 40 years in and around Charleston, S.C. While succession planning for him to take on a greater role leading the business with siblings, Shannon, and Christy Hawkins Poyner, was underway, the pandemic acted as an accelerator.

As some roofing contractors altered their business plans slightly to absorb the economic downturn and others chose entirely different career paths, Hawkins seemed to find a sweet spot in between. He deliberately brought a measured, steadying approach to navigating the business climate caused by COVID-19 and stayed close to core company values such as high-quality work, honest pricing and customer care.

But he also viewed it as an opportunity — rather, the opportunity to pivot and bridge the gap between what made the business successful and what will keep them going strong in the future.

“We’ve had a strong family business here for years, and are very proud of that, but feel confident this is right time,” Hawkins said while explaining why the business recently transitioned to TriCo Exteriors. “Everything is changing right now with this crisis.”

Though the company’s success was built on shingle roof replacements and storm work in the communities surrounding this landmark Southern city, Hawkins spent a lot of time and resources diversifying over the past 24 years as general manager and vice president. Today, the company is not only top-level shingle installers, but TriCo has crews that specialize in metal systems, as well as a host of exterior services including windows, siding, skylights and gutters. Hawkins said they’re also getting inside — adding insulation services to the mix. 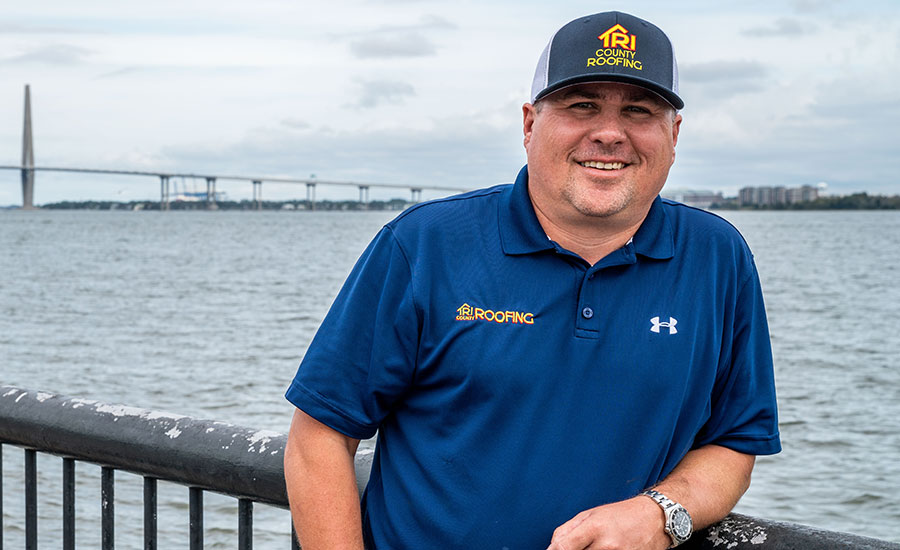 TriCo Exteriors’ Travis Hawkins sees the importance of adopting technology and using multifaceted marketing to bridge the past success of the family business to the opportunities ahead.

Travis’ father, Dale, started the company shortly after graduating high school on the outskirts of North Charleston in 1972. He didn’t have that much time to dedicate to it at first, as he also joined the U.S. Army, where he served in the 82nd Airborne as a paratrooper. But the work was something he always looked forward to during his free time from the army.

He developed a love for the job while roofing with his father and family friends during the long southern summers, and earned enough money at it as a side job that he decided to turn to it full-time in 1981. He also earned a business degree while raising the family of five with wife Kim, his high school sweetheart, and employed knowledge from both worlds to build a sustainable business plan that always incorporated family-friendly marketing.

Among TriCo’s market strengths was its simple, yet intuitive 1-800-NEW-ROOF hotline number, catchy highway billboards and an unmistakable ‘Roof Buster’ logo fashioned after a famous Hollywood film of Travis’ youth.

Messing with that many years of successful messaging wasn’t taken lightly and he studied for years, Hawkins said. Still, he felt committed to innovate, even if that took the form of a massive rebranding effort in a market that already proved responsive to strong marketing campaigns.

The process has been deliberate, and rolled out in phases to make sure the synergy between both new and old continues in the public mind.

TriCo’s website and external communications are all updated with the new brand and logo, as are the fleet of company trucks and vehicles wrapped with new signage to become moving billboards. Hawkins moved a little slower with community-building projects and initiatives, including youth sports sponsorships, where the new branding will be phased in as amateur spectator sports return as planned this spring. 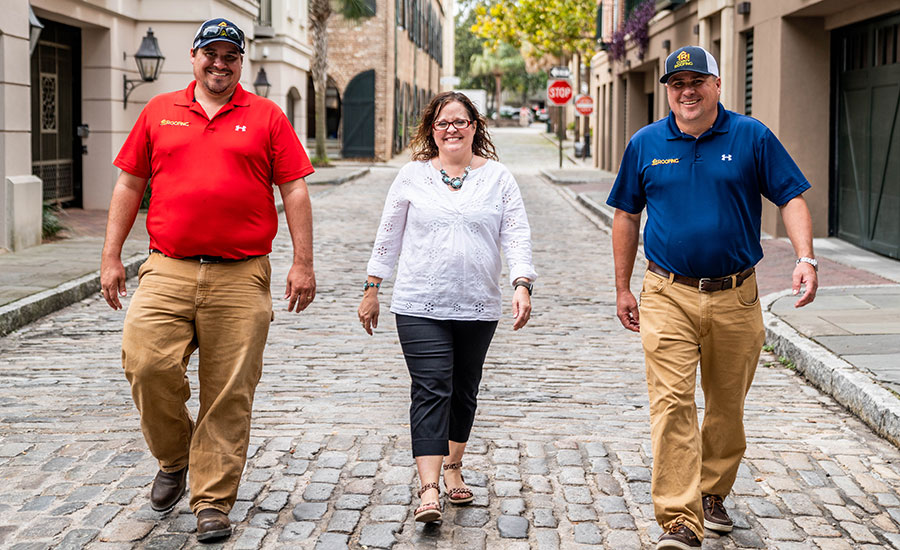 The next generation of TriCo Exteriors (FROM LEFT) siblings, Shannon Hawkins, Christy Hawkins Poyner and Travis Hawkins, are committed to keeping up the values instilled by company founder Dale Hawkins, their father, in and around historic Charleston, S.C.

Growing up in the Charleston area and being in and around the industry, Hawkins has grown to trust his gut. Changing a logo or tweaking a mission statement won’t change how the community feels about a local business.

“I think they’re ready. And I know we’re ready,” said Hawkins, who joined the company in an official capacity after attending Newberry College in 1997. “It does seem like the best, right time to pivot.”

There were many companies that switched up their marketing campaigns or opted to use the pandemic as a positive in their messaging in 2020, but it’s a delicate line to balance along, said Anna Anderson, CEO of Art Unlimited. The national marketing consultant with years of experience working with roofers said the key to rebranding correctly in a community where the existing business already has a strong following is investing deeper into the people that have made them a success.

“Sometimes we’re so caught up in measuring the performance, but if core values are there at the forefront of your marketing ... your consumer connects to it, and that builds a brand,” she explained. “It’s more than just the colors, logo and the icon. It’s that voice and that heart that truly shines through.”

“Great brands will change 5% to 10% over time, and they take that time because they don’t want to lose the trust of their customer base,” Anderson said. “Any time you’re looking at that large rebranding, be strategic about it and make sure you’re carrying some of the historical elements into that new presence, because that’s the common thread that your consumers know, trust and love.”

Hawkins has taken that to heart.

“Our customers know they get more than our services,” he said. “They get a sustained relationship, a partnership with us, and that builds trust in our ability to respond to their future needs. They know about the extra mile we provide.”