This website requires certain cookies to work and uses other cookies to help you have the best experience. By visiting this website, certain cookies have already been set, which you may delete and block. By closing this message or continuing to use our site, you agree to the use of cookies. Visit our updated privacy and cookie policy to learn more.
Home » Roofing Contractors, Are You a Big Hat or a Lot of Cattle?
ColumnsLow Slope RoofingMeasuring UpSteep Slope Roofing

Roofing Contractors, Are You a Big Hat or a Lot of Cattle?

I have decided to take real contractor examples from our files and change the numbers to protect the innocent — very similar contractors with different approaches to strategies toward business.

Let’s start with Contractor A, who copied his boss’ overhead and business structure with no idea of costs. Texas has a saying for ranchers who are all show and no go. They refer to them as a “big hat, no cattle” operation. Play cowboys who are more image than ranch-savvy. Some contractors can also be described this way. Their approach is to grow and to make money. It is an easy trap to fall into and it usually goes something like this. 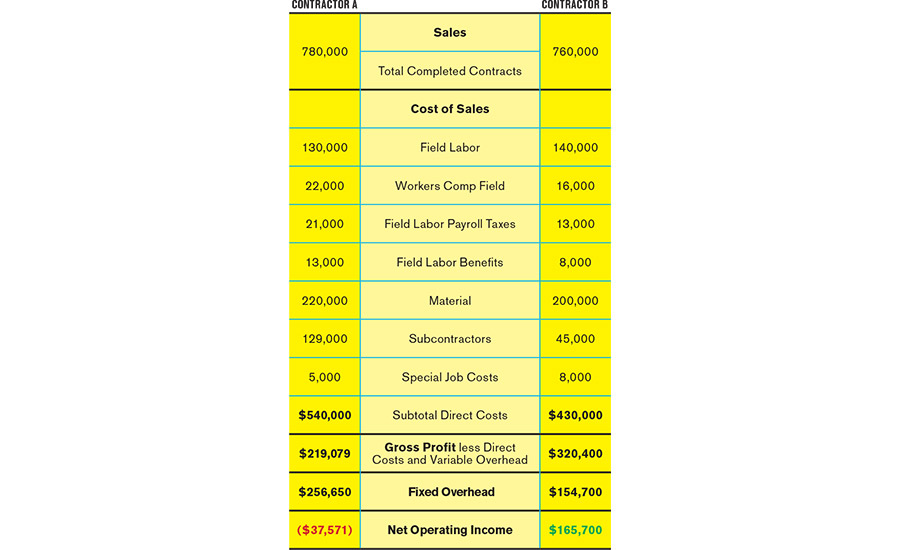 Naturally, he copied this format from his former employer. That company probably had new trucks, an office, someone to answer the phones, etc. Most start-up contractors were either foremen or sales estimators for another contractor. They really did not have access to all the numbers, so it was only natural they would think such an overhead structure would be the way to go.

To make matters worse, start-up contractors do cheap work, with many simply expanding their moonlighting business, which had no overhead. Since the contractor starts out working on the roof, quality is high and production strong. Soon word-of-mouth referrals grow and off the roof he goes, as he can no longer keep up with estimates.

To make matters worse, he creates a large advertising presence and signs up for online referral companies. Why does he/she need a salesperson? The owner can easily sell the $780,000. We find the contractor also has failed to adequately train a lead person or foreman to take his place. To make matters even worse, he does not do a good job of job costing and tracking jobs.

Now let’s take a look at Contractor B, who has taken an opposite approach we’ll call “No Hat, but a lot of Cattle.”

This contractor has taken a totally different route with profitable growth. He was more conservative in his approach. Contractor B raised prices and learned the numbers. He tracked costs on each and every job to eliminate losses. The company concentrated on the profitable work, learned to sell value and built a backlog. He also took a long-term approach to crews and developed leaders prior to stepping off the roof. He may have used his bookkeeper to help get the numbers right, but he knew what those numbers should be.

As the business grew, a part-time secretary scheduled appointments, tracked job hours and processed paperwork. Contractor B made money and grew. He did not see the next sale as a salvation to his financial woes and believed growing would solve all problems. Contractor A appears more successful but in reality, it is just the big hat that is fooling everyone. The truth is that Contractor B will be a millionaire in 20 years and Contractor A will be in the heart ward of the local hospital.

In summary, you have to make the choice as to what type of contractor you would like to be. No one is telling you to raise prices and what you charged as a moonlighter might have made sense when earning mad money. Such strategy does not work when building a real business. Rapid growth is not necessarily a contractor’s friend.

The question is do you want to have a lot of cattle or a big hat?

The Value of Getting Sick

Win Somewhere in Your Roofing Business

Myths and Facts About Coaching and Training

Are Your Beliefs Hurting Your Business?

Monroe Porter is the president of PROOF Management Consultants. He can be reached at 804-267-1688.

One in 10 Roofing Contractors Face Internal Theft, Will You Be One of Them?

Back to Black: After More than a Half Century, Many Construction Professionals are Seeing the Benefits of Black EPDM in a Whole New Light

#MeToo and You: Business Owners Big and Small are Facing Sexual Harassment Claims

How Roofing Contractors Get Sloppy in a Hot Market