Commercial roofing contractors began the year looking for answers – and a lot of product – that seemed to be hard to find just as demand ramped up following a sluggish pandemic recovery. Price volatility, record spikes in fuel costs and inflation kept many roofers from truly hitting stride despite an active storm season and mild weather conditions that stretched peak roofing time well into the fall in many markets.

And that’s just the economic factors. Mix in an aging contractor workforce, widening cultural divides, and enhanced health-and-safety concerns in the office and jobsite, and roofers have a new business reality that emphasizes a lot more than roof longevity. Despite all this, roofers are finding pathways to success and remain optimistic. According to RC’s annual survey, commercial roofing contractors across the country experienced sales growth over the past year, and roughly 79% are anticipating slight to major increases in sales over the next three years. 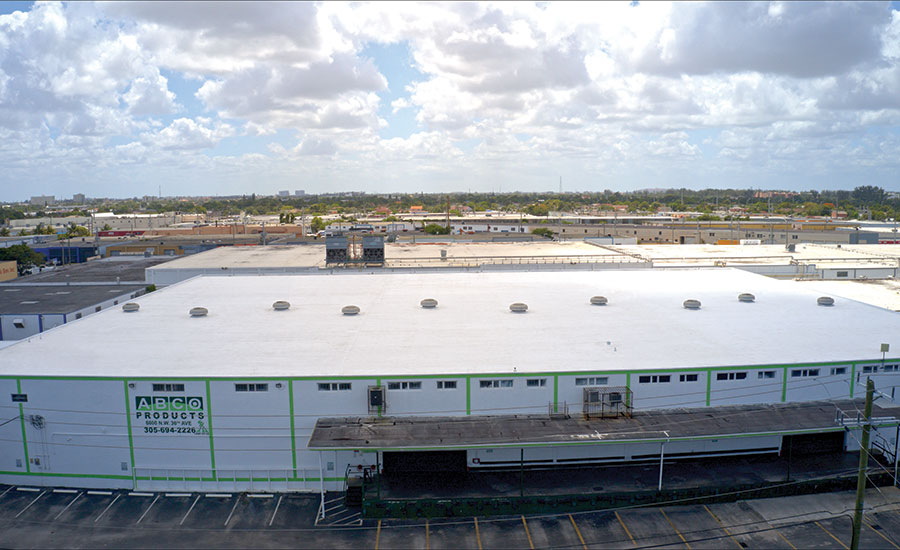 Single-ply remained the most popular product, with respondents saying it accounted for nearly half of their overall sales revenue.

With the help of experts from Clear Seas Research — the survey and research arm of RC’s parent company, BNP Media — RC again circulated our annual roofing survey in the fall to help put the challenges of the current year in perspective as the focus begins to shift toward 2023. Respondents consisted of roofing contractors that subscribe to RC and are registered on roofingcontractor.com.

The commercial roofing contractors who responded represent companies that generate more than 50% of overall annual revenue from commercial projects — whether that be in roof replacement, repair or new construction. The majority were men (81%) and nearly 54% were between ages 50-69. The geographic breakdown was led by the South (41%); followed by the Midwest (30%); the West (16%); and Northeast (13%). Roughly 44% identified themselves as corporate/executive management, and another 30% identified as general managers. Full disclosure: each respondent received a $15 gift card. 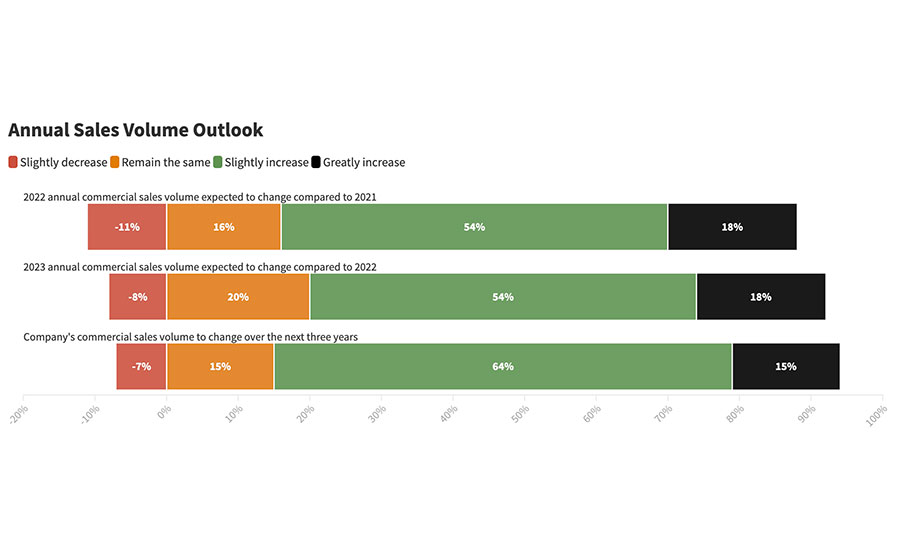 Price increases and scarce materials may have created problems on the jobsite, but didn’t seem to have a negative impact on sales. Survey respondents said they were largely pleased with sales volume growth from 2021, including 72% that reported increased sales over the past year. That seemed to fuel optimism for the near future. Just as many (72%) said they anticipate growth in total sales volume next year, and another 79% anticipate growth through 2025.

Roughly 11% of contractors said they expected total sales volume to drop this year compared to last, and another 8% and 7% said they anticipate sales to drop next year and over the next three years, respectively. That’s slightly more than what respondents said to the same question last year.

In terms of roofing systems, single-ply remained the most popular at 85%, and respondents said it accounted for nearly half of their overall sales revenue. As expected, contractors noted a 61% increase in single-ply roofing sales compared to the prior year, and another 33% said single-ply sales remained flat.

Metal roofing sales (82%) and coatings (66%) were next, with low-slope asphalt (64%) and steep-slope asphalt shingles (44%) rounding out the top five. Just under half (48% and 47%, respectively) indicated metal and coatings sales increased, while about 40% said sales stayed flat. Low-slope asphalt (21%) and polymer/synthetic roofing (19%) demonstrated the largest drops in sales among respondents.

Looking deeper into the specific product categories, on average, modified bitumen-SBS generates nearly two-fifths of low-slope asphalt sales. That’s followed by built-up-roofing (32%) and modified bitumen (27%). About half of all single-ply roofing sales were comprised of TPO. Both EPDM and PVC tied next at 21%. 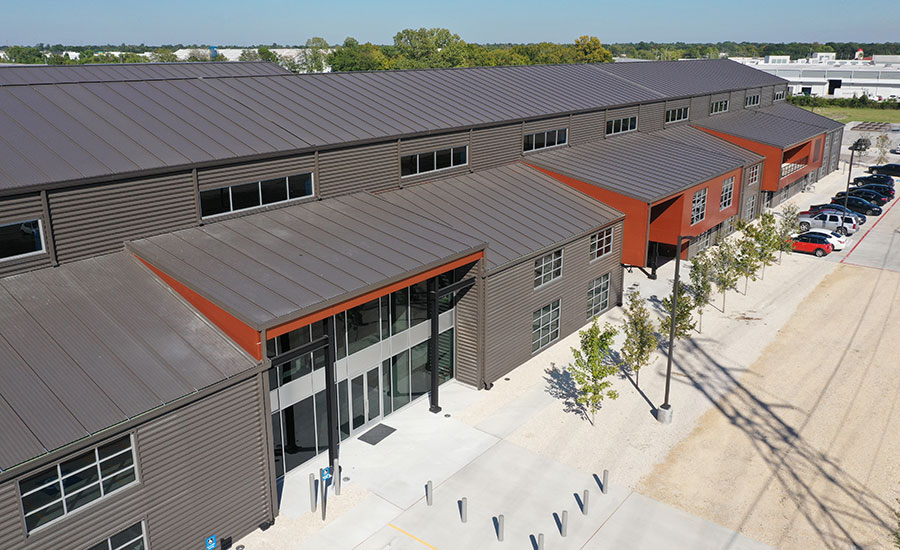 Metal roofing is gaining popularity among commercial customers, with 82% of contractors listing it as a top product.

While coatings accounted for just 8% of sales revenue, the level of contractors involved with the product exceeded 60%, and surpassed both low-slope and steep-slope asphalt for the first time in RC’s survey.

“Coatings are one of the easiest entry paths for a roofing product category and the industry survey data shows that contractors that already do coatings are seeing growth,” said Dan Quinonez, executive director of the Roof Coatings Manufacturers Association. “It is exciting to see so many discovering, or perhaps re-discovering, coatings and we are eager for those new contactors to do the same.”

On the sustainability side, 63% of contractors said they expect commercial solar sales to remain the same, and 31% said they anticipate solar sales increasing. More than three-quarters of respondents (79%) said garden roofing should stay the same, and 16% expect an increase. 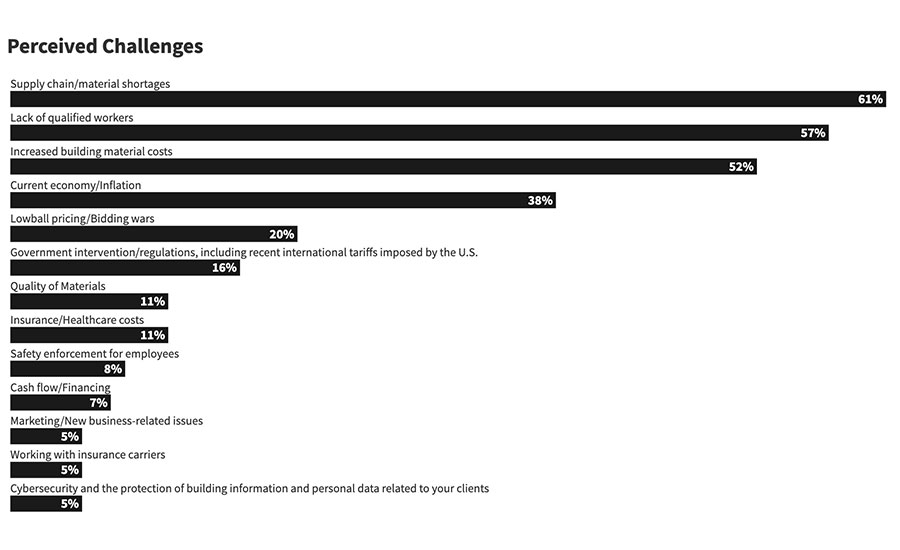 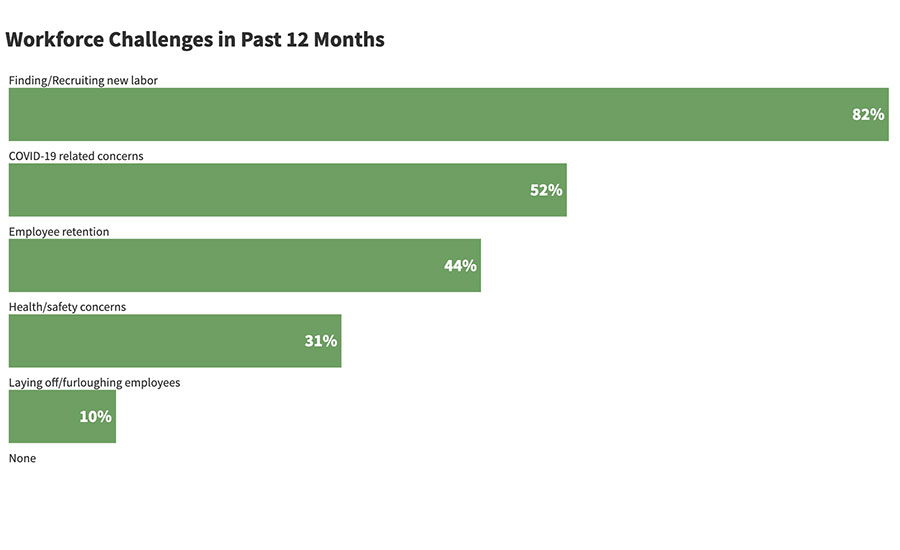 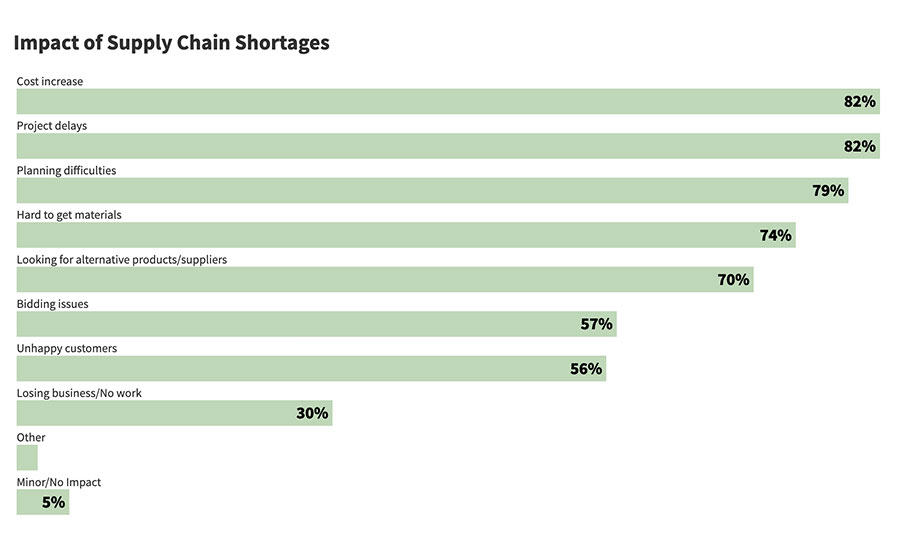 While the supply crunch and number of workers fleeing the workforce reached record proportions last year, more than half of commercial roofers noted increased building material costs (71%), lack of qualified workers (60%) and supply shortages (56%) as their chief concerns heading into 2022.

The state of the economy and continued fears of the U.S. entering a full-blown recession also showed in the survey. While just 13% of contractors worried about a weak economy last year, the concern worked its way into the top five of perceived challenges at 38%, with lowball pricing lagging behind at 20%. Also noteworthy were concerns about government regulation falling from 23% in last year’s survey to 16% this year, and quality of materials and insurance/healthcare each dropped to 11%.

Finding new workers (82%) was far and away the leading workforce challenge in the commercial roofing space. Like last year, COVID-19 health and safety concerns followed behind, but by far fewer contractors. Just 52% said the pandemic was a concern, compared to 73% in 2021.

Another 44% identified employee retention as a problem within the past 12 months. To address it, the majority of contractors said they increased pay and handed out bonuses. About 70% noted the ability to ensure enough work for employees, and another 64% used their emphasis on safety to their advantage. Providing training (62%) and benefits rounded out the top five. Offering overtime and more vacation days or paid time off received just 39% and 31%, respectively. 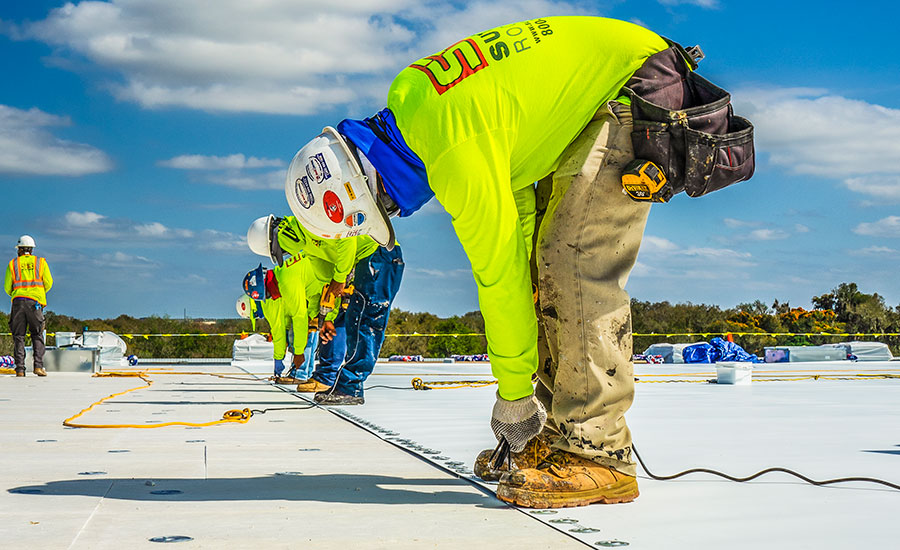 Four out of five commercial roofers said they experienced an increase in labor costs since January, and 15% said those costs remain the same.

When asked specifically about the impact of supply chain woes on their businesses, contractors overwhelmingly indicated that cost increases and project delays were at the top, both with a commanding 82%. Nearly as many (79%) noted planning difficulties and three-quarters said difficulty finding materials was hurting bottom lines.

“It was something we struggled with for a while, and what we’re finding now is the manufacturers are being much more communicative, they’re informing us,” said Kelly Van Winkle, president and CEO of King of Texas Roofing in Dallas, over the summer. “If they’re promising something within a given week, it’s actually starting to be that. The important thing is we learned to communicate with our customers.”

Workers that roofing contractors are able to hire and retain are also costing more. Four out of five commercial roofers said they experienced an increase in labor costs since January, and 15% said those costs remain the same. The average increase was about 14% among all respondents, the data showed.

On average, commercial roofing companies are largely using full-time employees to complete projects, while subcontractors make up just about one-fifth (17%) of all field labor. Subcontractor use did increase by 21% in the past 12 months, but remained the same for the bulk of respondents. Those that were using more subs said it was due to a lack of qualified employees along with specialized roofing work.

Communication could also be an issue. On average, respondents report nearly two-of-five crew members (37%) speak a language other than English to perform daily job functions. Just about 15%, or one-in-10 employees, in senior management speak a second language. Spanish is the most commonly spoken language at 67%, followed by English (37%). 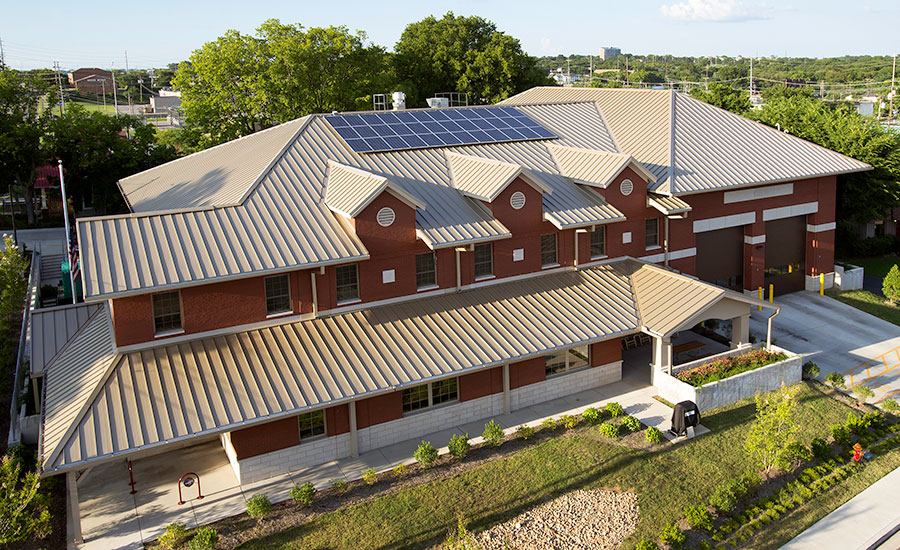 With commercial roofers focusing on full-time employees, training is rising to the forefront.

The overwhelming majority of contractors (85%) said they rely on in-house, on-the-job training for new and current employees. More than half (59%) indicated they use formal training programs within their own company, followed by manufacturer training (51%). Apprenticeships and vocational schools accounted for about 35% of training methods utilized by contractors combined.

Safety training also appears to be a priority, with seven of 10 companies reporting weekly safety meetings, and more than a quarter (36%) report daily or weekly safety training sessions. Another 39% provide it monthly, according to the data. About 85% of companies provide all safety equipment, and nearly half (48%) work with a consultant or third party on safety plans.

Technology is another key factor in not only making current workers more efficient on the jobsite, but also developing workers for the next shifts in the marketplace. Estimating software, aerial measurement and enterprise or accounting software were the most commonly used technologies identified by contractors. Both estimating and accounting software made the top three last year, along with customer relationship management (CRM); however, more than half (54%) of contractors selected aerial measurement tools this year, a jump of 14%. The number of contractors using CRMs dropped to 33%, and was surpassed by drones. Roughly 38% of contractors identified using drones, and another 25% indicated they plan to add or upgrade their drone situation in 2023.

Almost half (46%) of all respondents said they currently use drones, and 28% are discussing adding drones within the next five years. Of the ones that use drones, 87% say they own and operate their own, and 13% lease the equipment. The drones are used, on average, on about a third of all projects, and for purposes like documenting before-and-after roof repairs and replacements; inspections; marketing and thermal imaging. Only 16% have no plans to use drones at all in their commercial roofing business. 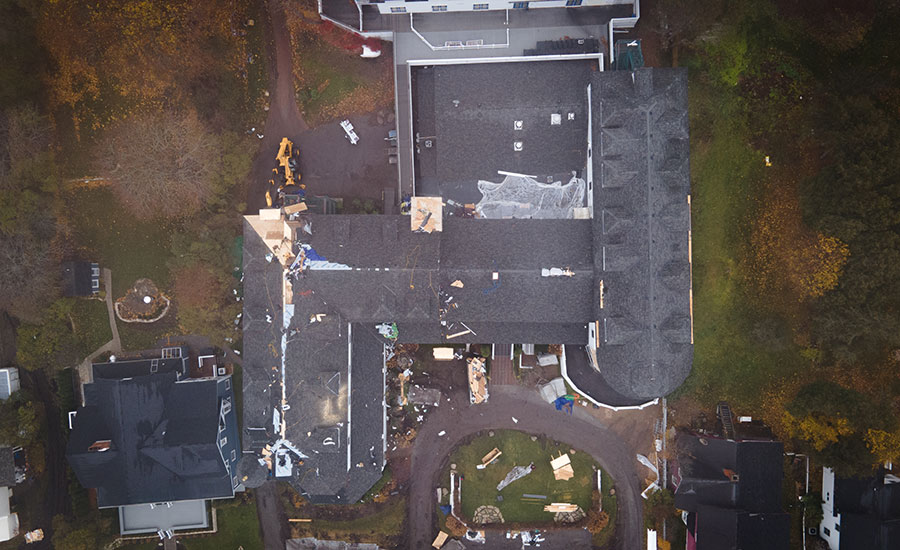 Nearly half (46%) of all respondents said they currently use drones, and 28% are discussing adding drones within the next five years.

The commercial roofing market had its challenges in 2022 and will have some carry-over to 2023 as the weight of key economic factors like inflation and raw material availability fluctuate and still play a vital role. As the sales-related data shows, roofing contractors remain hard at work and optimistic that demand will continue to push the industry forward.

Roofers with an eye on sustainability may get a bounce from the energy-friendly projects funded through the Inflation Reduction Act. But they’ll need highly-efficient and well-trained workers to meet any spikes in roofing demand. The survey results outlined above show the industry is ready for that next step in concept, but isn’t quite ready for that in practice, yet.

Concerns over an aging and dwindling workforce that may be further impacted by recession fears are very high. While individual, regional and national training programs are underway, those students won’t have much experience, and may not be ready in time to truly maximize the opportunity. After two rather difficult years of pivoting, commercial roofing contractors should be poised for just about anything, and will have to prove they’ll be ready.