There are few music venues on the planet that are designed, renowned and revered for the immersive experiences it can provide more than the historic Red Rocks Amphitheatre in Morrison, Colo.

Set perfectly amid the serrated rock structures overlooking metropolitan Denver and the foothills of the Rocky Mountains, the 9,545-seat concert venue is a national treasure that has drawn the world’s best musical talents who have thrilled millions of fans for decades. Though it’s believed to be there since the time of dinosaurs within the Red Rocks Mountain National Park, the amphitheater in its current form opened in 1941. It became an official landmark of the City of Denver in 1973 and joined the National Historic Registry in 1976.

So when it came to replacing the rooftop above the venue’s stage, a certain type of contractor was needed: one that not only would rise to the occasion with creative solutions to challenging circumstances, but one that would also appreciate the opportunity to work on the project of a lifetime, and embrace the importance of high-quality performance in all facets of operations. 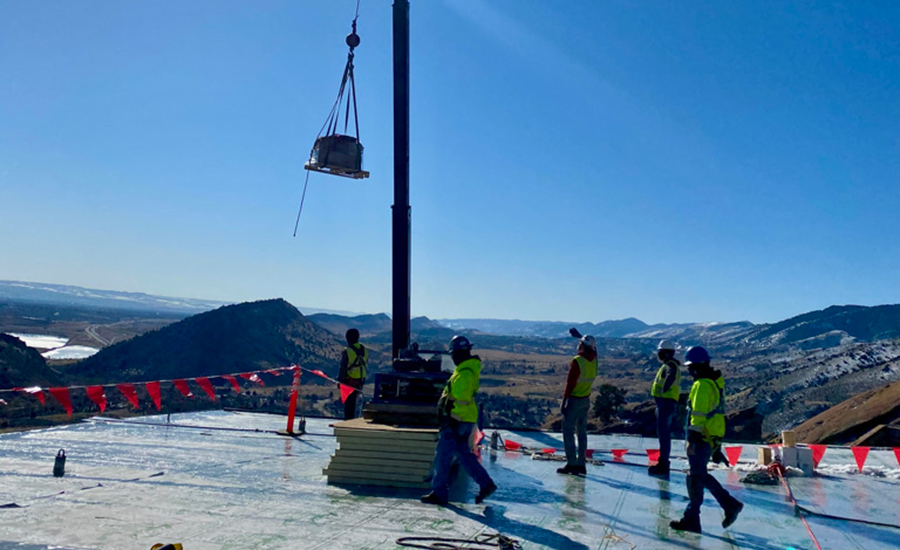 A crane was required to hoist roofing materials over a wall and around the mountain.

In 1928, the City of Denver acquired land in the Red Rocks area, formerly promoted as a community park and performance venue with a simple stage and existing rough slope used for seating. Through the joint efforts of many federal agencies and Denver-area organizations, an amphitheater was constructed between 1935 and 1941 to provide a more functional concert setting.

It sits about 10 miles just west of Denver, nestled among huge red sandstone monoliths of the Rocky Mountains at an elevation of 6,450 feet. Today, it’s the state’s most celebrated architectural structure and has a global reputation for unparalleled acoustics and memorable live performances.

Many improvements to the venue have been made over the years, and in 2021, the city looked to expand and upgrade the venue with a larger roof over the main performance stage. An 8,500 square-foot Nordic brown copper standing seam metal roof was installed to replace the original one. The roof’s high-end copper was shipped from German supplier, Aurubis, in coils and fabricated on site. Mounted to the venue’s stunning new roof is the complete DualGard™ snow retention system by S-5!.

Aside from the high-profile nature of the project, the team at Superior Roofing Inc., in nearby Aurora, Colo., was eager to leave their mark on such an important piece of architecture.

“My first concert was the Beastie Boys at Red Rocks around 1986, when I was 10 years old,” said Mark Lopez, Superior’s safety director. “Ever since then, I have attended concerts at Red Rocks around 250 times. For me, it's the best venue in the world that I get to often experience because I live in Colorado.”

Lopez and others had their work cut out for them, dealing with highly unpredictable weather conditions in extremely high altitudes.

“We took pride in the fact Red Rocks is a historical monument and everyone on the crew approached the roof replacement project in a more personal sense,” he said. “Most of us have long-lasting memorable experiences engraved in the venue, and we had to protect it at all costs.” 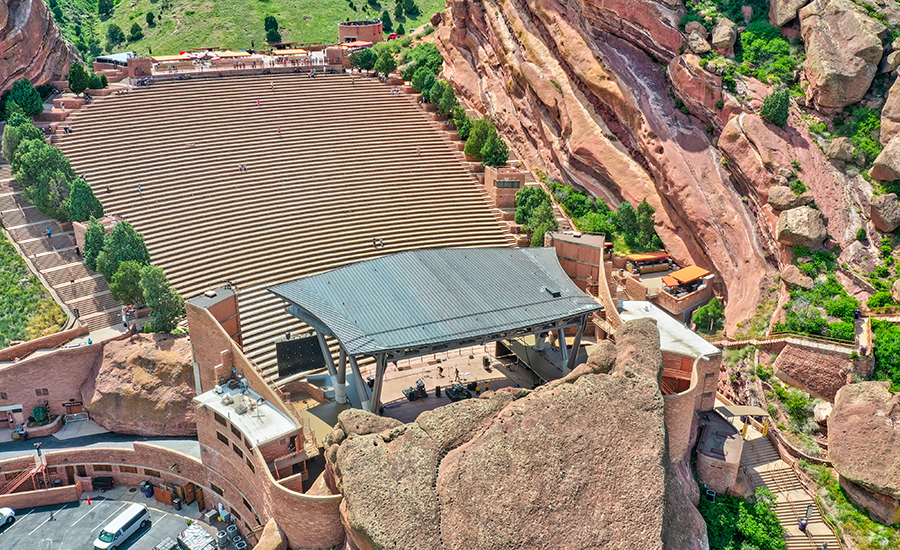 The venue is a designated historical site, requiring a tested, engineered solution that was aesthetically pleasing and would meet the architectural requirements and specifications.

The new roof sits between 75 and 100 feet above the stage floor. Without a snow retention system, snowpack and ice could easily escape, endangering performers, concert-goers and expensive equipment.

Due to the high elevation of the site, extreme weather conditions ranged from freezing rain and snow to warm, dry, and sunny, then back to winter-like conditions throughout the duration of the project. Such weather conditions would also be a concern for the venue once construction was complete and business as usual resumed, therefore a high-quality, long-lasting snow retention system was necessary to prevent melting snow and ice from sliding off the sloped metal roof.

The terrain and mountainous setting of the venue, with long lines of stairs and curvy rocks, presented its own set of challenges. Construction staging areas were limited, and it was difficult to maneuver equipment and material. A crane was required to hoist roofing materials over a wall and around the mountain.

“The thing about mountain roofing is that construction is highly dependent on weather and we don’t have a lot of time to respond to bad or inclement temperatures. So projects are constantly hands-on,” Lopez said.

The venue is a designated historical site, requiring a tested, engineered solution that was aesthetically pleasing and would meet the architectural requirements and specifications. Superior’s team showcased a collaborative approach and willingness to work with specialists ready to meet the challenge. That meant facing architectural requirements and specifications, as well as a comprehensive, yet flexible plan that included input from architects, designers, and the manufacturer. Together, they addressed ways to attach and assemble the roof; the roof’s overall final presentation; and what could be done to maximize scheduling amid some specific site limitations.

“We were successful with the Red Rocks project because the whole organization understood what the risks were and took safety extremely seriously,” Lopez said. “That’s the difference between a successful and unsuccessful project.” 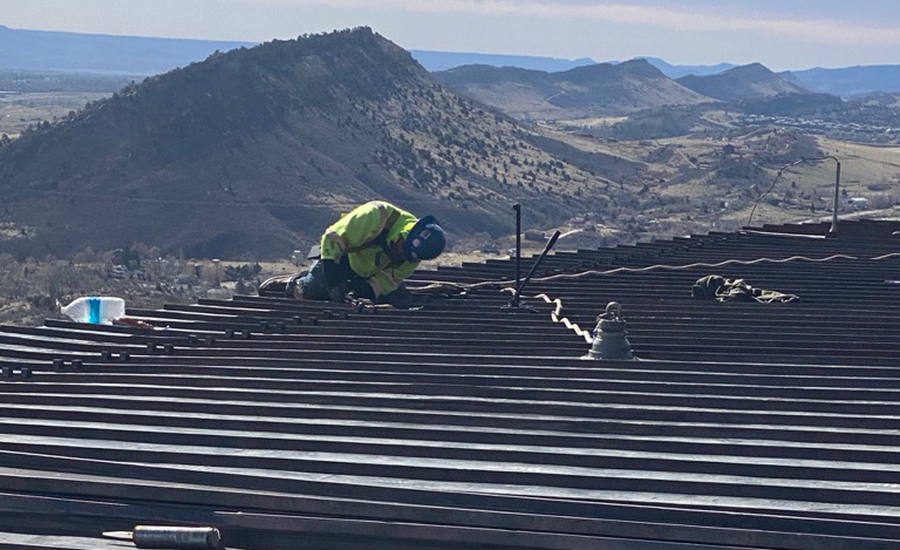 Due to the weather conditions, Superior Roofing installed a DualGard snow retention system by S-5! that resists stresses in two directions.

Custom powder-coated to match the roof, DualGard is a complete, two-pipe aluminum, snow guard system with strength, testing and quality for almost any standing seam profile, so the team was able to accomplish perfect color matching to the copper roof — meeting the architectural requirements for this historical site.

Designers point out the system’s utility — accomplishing two functions simultaneously with one system.

He said it does so in two ways: first, by clamping the seam elements together so they cannot unwind; the second is by acting as a deflection limiter, preventing the flat pan of the roof panel from excessive upward "bowing" under negative pressure. The pressure is particularly strong along the eaves and corners of tall, open structures, like the Red Rocks venue.

Additionally, the DualGard was easy to transport to such a challenging setting because it’s compact.

Haddock said he believes the new roof can serve the venue for many decades into the future and that operators will benefit from less maintenance costs and repairs.

The practical aspects of the project aside, Lopez said he and the others at Superior Roofing said they can all reminisce about the days where they’d eat lunch around the venue and look at the progress they were making with immense pride.

“During construction, I couldn’t stop thinking about how amazing this opportunity is and how lucky we are,” Lopez said. “We get to keep this memory forever and point out to my kids and family that our team and company built a one-of-a-kind roof on a one-of-a-kind amphitheater.”

S-5! contributed to this report.