The history of Malone Roofing begins more than eight decades ago in the Deep South, where Horace and Claudia Malone raised nine children — each of whom worked in the roofing industry at some point.

From those humble beginnings as Hub Sheet Metal in Hattiesburg, Miss., three generations later Malone Roofing Services is among the largest and well respected roofing companies that do both commercial and residential installations in their market. With eight locations stretching from Houston, across Mississippi and Alabama to Florida, Malone’s reach and versatility makes it uniquely positioned to serve a growing population base and multiple business-friendly environments.

Brothers Roman and Ryan Malone are the fourth generation of family owners, and along with CEO Cornell Malone, their father, oversee a staff of 225 that generated nearly $51 million in revenue in 2020. That was good for #35 on RC’s Top 100 List in 2021.

From stadiums to office complexes and high-density residential, Malone’s crews can work on a variety of projects and have experience installing just about every manufacturer in the business. The company also has a robust service department that became a full-time operation after the heavy 2005 storm season that swept through the Gulf of Mexico.  While they have deep roots and a stellar reputation as a good, family-owned business in the communities they serve, Malone’s sheer versatility allows them to outshine the competition and win jobs in rural, urban and suburban markets.

They’ve done it by sticking to their core principles of high-quality work and stellar service, balanced with an ability to staying flexible. Being open to change started at the top with Cornell, the company’s chief estimator, who handled all projects with scribbled yellow note pads and manual calculations — until his son taught him a better way.

While working together on reroofing the Mississippi Museum of Natural Science in the late 1990s, Roman became intrigued by the “old-fashioned way.” Though it worked, he recognized the inefficiencies and potential for error, and offered up his exceptional skills for spreadsheets and digital solutions.

“That’s why I put them through school,” remarked Cornell, who has a college degree in accounting. “I told them I would teach them everything I know, and that they can help take us to the next level.” 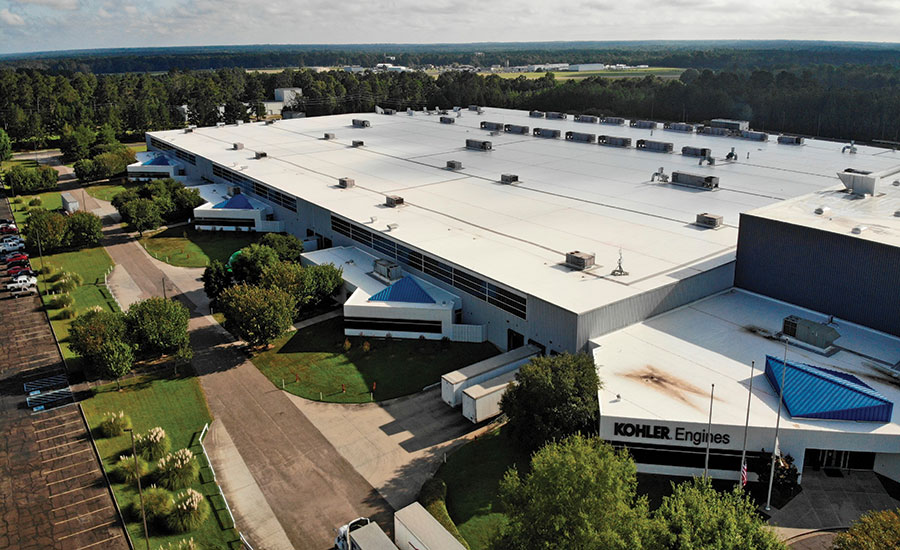 “We’ve kind of found our niche as the ‘big guy’ in the small market instead of trying to fit in with everyone else in the big market,” Ryan Malone said. “But we cover a lot of territory and markets in multiple states to find the jobs that fit us.”

Cornell experienced several ebbs and flows in his business journey that includes partnerships and dissolved partnerships with family members. Ultimately, he was able to unify splintered parts of the family business by the mid-1990s — just in time for his sons to get involved and for periods of explosive growth.

The business specialties now synonymous with Malone Roofing Services took some time to develop over the years, as did the business savvy to pass on from one generation to the next. But the love for roofing in the Malone clan is rather immediate.

“My brother, Ryan, and I grew up in this business,” Roman explained. “When we were 13 years old, we began working the summers with the crews.”

That first day, Roman recalls removing a coal-tar pitch build-up roof in 95-degree heat at the height of Mississippi’s summer humidity. A few of the veteran roofers explained pitch burn — the sensation of sunburn mixed with debris and dust fibers from the roofing material — and offered him some cream. He refused, thinking he didn’t need it.

“As I began to sweat, I would wipe my brow with my dirty sleeve,” he recalled. “Eventually, the fibers from my sleeve caused unreal pain, and my eyes had swollen shut. I was miserable for the next few days, needless to say.”

He overcame the pain, but the lesson was clear — he didn’t know everything about roofing, and he’d better start paying attention. By age 16, Roman started to show heavy interest in the metal side of the business and spent the rest of his teens and college years as a metal foreman during the summers.

Armed with a bachelor’s degree in business administration from the University of Southern Mississippi, Roman became a full-time employee tasked with running the entire sheet metal operation at 22. It continued to grow into a company strength, expanding to roughly 40 employees.

Ryan, meanwhile, also started college, but recognized early on that his future was in the roofing business. He began working full-time at 19, and started to set himself apart in the field and working the sheet metal side of the business.

Like Roman, he too was tested early on by the job’s physical and mental demands. Ryan vividly remembers working a commercial job about a year into his career and pulling a mop cart across a slicked piece of insulation. The cart tipped, spilling hot tar over his ankle. Ryan suffered third-degree burns on his lower leg and second-degree burns on his hand.

“The mop cart poured into my dang boot!” he said. “One of the things I remember about it was, that as painful as it was, I couldn’t wait to get back to work. I was miserable trying to wait it out to get back to the job.”

New estimating methods helped move jobs along quicker and more accurately, leaving the Malones seriously considering expansion. They were already winning jobs in Jackson, and in 2000 made a serious commitment to the area. In 2004, they moved into the Florida Panhandle and settled in Pensacola at the right time as Hurricane Ivan roared through the region, leaving behind more than $20 billion in damage.

That experience was an eye opener into insurance work and kept revenue strong. It also was a good training ground for the challenges ahead. A year after Ivan, Hurricane Katrina barreled through the Gulf and simply devastated parts of Mississippi and Louisiana. The business exploded in the storm’s wake, and the Malones started a sister company — Malone Roofing Services — that solely performed service and maintenance work out of locations in Baton Rouge, New Orleans, and Alexandria, La., as well as Birmingham and Mobile, Ala.

“Our company tripled in size over the next year. We were not prepared for that much growth at one time and we decided to maintain volume over the next few years, as we developed our people and systems to keep up,” Ryan said.

Scaling the company that fast also revealed some vulnerabilities. Roman said that as the sales team developed, it became clear that each division and service salesperson had their own way of pricing jobs and creating proposals. There were numerous inconsistencies and inefficiencies, and the hunt for a dynamic software system that would streamline them all was underway. After two years of frustration and some letdowns, they decided to look into building their own digital estimating and proposal platform. It’s called MaloneApp, and Roman said it is paving the way for the future.

“What began as a simple estimating platform will become our hub for the majority of our day-to-day operations,” he said.

That and other innovations have the company positioned for growth. Malone uses two full-time risk managers responsible for training, inspections and handling any claim work. Each job begins with a safety orientation they run with superintendents and operations managers, and they issue annual safety awards to employees that show a true commitment to going home safely at the end of each day. Good driving is also rewarded with a safe driving award distributed every month to a team member with the least amount of traffic infractions.

Training is important for retention, and Malone has its own training facility used for classroom and field training. Its goal is to educate the production team to know the processes and procedures for quality installations. Each year, various manufacturers are invited to provide training on all the different products used. Weekly production meetings with superintendents usually address any job-related issues and members of the team can provide assistance based on their prior experience.

This year, the company also intends to launch the Malone Leadership Program — an internal process where 25 pre-selected employees will participate in intensive, monthly leadership meetings at an off-site location. Over six months, those participants will meet in a group setting facilitated by professional coaches that will cover career development and other topics. Upper management is excluded from the program and encourages attendees to speak openly and freely about company operations without fear of any judgment. This year’s class is already selected.

“We’re excited about this program and expect our future leaders to emerge from the group,” Roman said. “I always try to learn something new and expand my knowledge base. The more you know, the stronger you will be.”

Those programs have been part of an evolution aided by Malone’s involvement with an elite group of roofing contractors from different markets. The group has been instrumental in navigating small problems and big ones through the COVID-19 crisis and ensuing supply shortage plaguing the industry.

As the world shut down and reacted to the health and safety threat, Malone Roofing took some time off due to the uncertainty. Contract work continued as soon as the roofing industry was deemed essential work, but service opportunities dried up. Many customers idled their facilities and were uncertain about revenue streams. Malone said they lost 20% of their revenue generated in reroofing contracts in 30 days, which was counter to any experience he’s had in the business, even after the Great Recession in 2008.

Once thought to be “recession

Following the shutdown, the squeeze of manpower and materials started to set in. Accustomed to ordering materials and starting projects within two to three weeks, Malone crews had to cope with long lead times, trucking delays, partial and multiple jobsite deliveries, shrinking crews, and price increases. When Hurricane Ida relief efforts began in South Louisiana in late August 2021, Malone said they had to rely on good partnerships with dozens of suppliers, as well as team members that stepped up in a time of need.

Those challenges aside, this trio of Malones is looking forward to the future.

“We’ve kind of found our niche as the ‘big guy’ in the small market instead of trying to fit in with everyone else in the big market,” Ryan explained. “But we cover a lot of territory and markets in multiple states to find the jobs that fit us.”

That future still includes Cornell, who at 71, still regularly shows his sons he has the “fire” to stay in the industry and said he has no plans to step away.