This website requires certain cookies to work and uses other cookies to help you have the best experience. By visiting this website, certain cookies have already been set, which you may delete and block. By closing this message or continuing to use our site, you agree to the use of cookies. Visit our updated privacy and cookie policy to learn more.
Home » 2021 Commercial Contractor of the Year: Sutter Roofing
Low Slope RoofingRoofing Contractor of the Year
Sponsored by Johns Manville

Despite Roots That Run More Than a Century Deep, Sutter Roofing is Fueled by a “Never-Settle” Attitude

Doug Sutter had just left the stage at the 2019 Best of Success conference in Miami and was eager to add a little footnote to his presentation on four generations worth of lessons learned in roofing.

He had finally worked out a deal to purchase the original roofing company that started a family legacy in his native West Virginia. The move — prompted by his uncle Dave’s retirement — was the culmination of a long-sought dream of unifying the roots of his family business with the flourishing commercial roofing enterprise his father, Stephen, and now he and brother, Brad, cultivated in Florida. 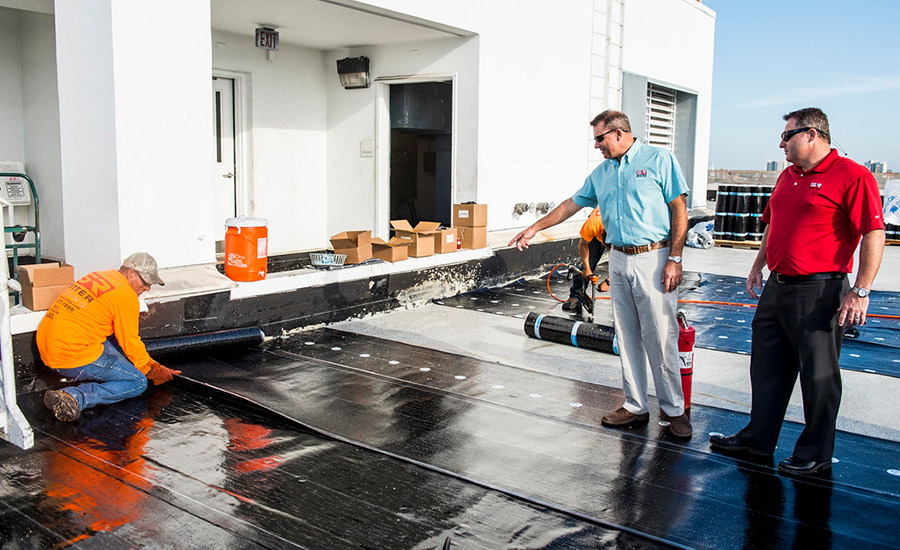 Energized by the news, and after watching a pair of respected colleagues share the same stage to claim their respective Contractors of the Year awards, he thought this may be the right time to finally include the company in the nomination process — for a minute.

Sure, Sutter Roofing was already a top-performing roofing company with national standing — consistently generating $50 million and more in revenue annually. Doug and Brad were already active leaders in the industry, gaining the respect of peers, multiple manufacturers and suppliers in the business along the way. Under their stewardship, the company grew to more than 300 employees; became known for promoting within and completing award-winning projects; and pioneered how roofing maintenance programs can become profit centers in commercial roofing.

Despite that, along with a history of giving back to the roofing industry and communities they serve, Sutter paused, and couldn’t push himself to complete the nomination process. It took two years — and a retired long-time employee’s nomination — for Sutter Roofing to become Roofing Contractor’s 2021 Commercial Roofing Contractor of the Year.

“I never submitted before because I strive for excellence and didn’t believe we were where we wanted to be,” Sutter recalled recently, echoing the spirit and philosophy of legendary football coach Vince Lombardi, a personal hero. “We’ve got a great team and I’ve always kind of wanted to have every piece of the puzzle in the right place, operating at an optimal level, before submitting.” 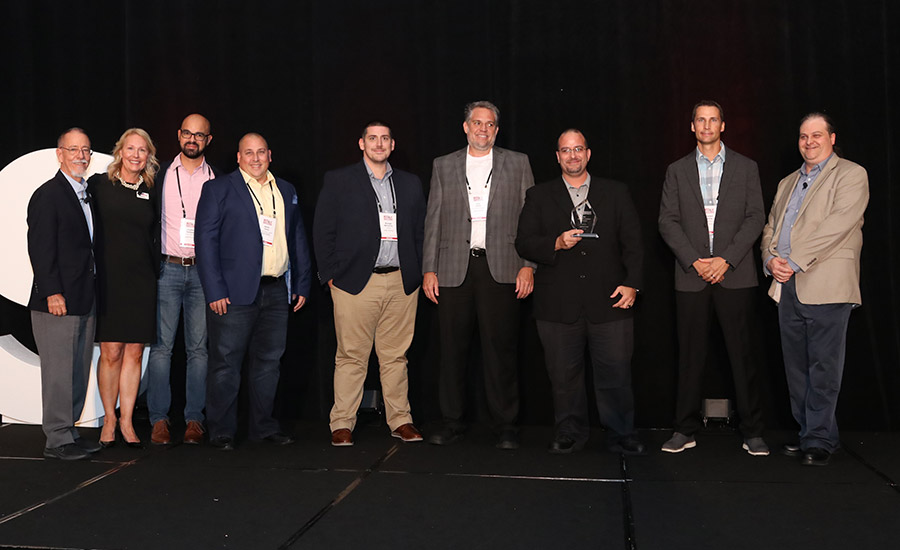 Members of the Sutter Roofing team joined RC on the stage to accept the 2021 Commercial Roofing Contractor of the Year at Best of Success 2021 in Frisco, Texas in September. “It’s a tremendous testament to our long-term employees and everybody that works at Sutter Roofing,” said President Doug Sutter via video. “We couldn’t be prouder to win this award and think we’re very deserving. Our family’s been in the roofing industry for four generations and this is a capper for us.”

Sutter had his rationale, and, as company president, it was his call. But John Kenney wasn’t going to sit idly by. As Sutter Roofing’s operations chief for more than a decade, he had a first-hand look and input into how the company scaled into a commercial roofing juggernaut. He also knew Sutter’s drive for excellence and humility — despite being reasons for the company’s success — would probably keep him from seeking well-deserved accolades.

“Sometimes when you’re in ‘it,’ you don’t always really see how things are the same way you do from outside,” Kenney would later tell RC as COO of Cotney Attorneys & Consultants, following his retirement as Sutter Roofing’s chief operations officer. “There are only a handful of roofing companies that have operated in two centuries and still going strong.”

Kenney highlighted his admiration for the company’s longevity and family-first foundation in his Contractor of the Year nomination.

“The Sutter family does not just talk the talk; they walk the walk. Team members are put first,” he said. “Doug constantly reminds the administrative staff that the company's most important assets are the hard-working men and women that work in the field each day installing roofs.”

That mentality was ingrained in Sutter Roofing from the company’s humble beginnings in 1902 by founder C.P. Sutter, Doug and Brad’s great-grandfather. So was innovation. Sutter’s early success was defined by a specialty in sheet metal that shifted into steel pipe fabrication for the deep-mining industry that dominated West Virginia in the 1930s and ‘40s. As strip-mining developed — further reducing the need for filtration pipes — Sutter returned to its commercial roofing roots by the late 1960s. A decade later, Sutter Roofing became early adopters, and ultimately experts, at single-ply installations. Seeing vast opportunity with a projected building boom, Stephen Sutter opened a Florida location in 1979.

Doug is a self-described “roofing lifer,” who’s essentially done it all as a roofing contractor. Prior to his current role, he worked as an installer, sheet metal apprentice, manufacturer’s rep, superintendent, project manager, estimator and vice president. He officially joined the company in 1989 and became head of Florida operations a year later. The company had 25 employees at the time and a limited customer base. Focused on core values, he said he’s been able to attract and retain great people that helped expand operations from the headquarters in Sarasota to multiple offices throughout the state.

He explained those core values as:

“It takes a team all the way around to have the level of success that we’ve had, and it goes back to our tremendous people,” Doug said, reflecting upon accepting the award in a video presented at Best of Success 2021 in September. “Looking at our phone extension list the other day, I’m proud to say about 90% of them are promoted from within. They’re long-term employees, and that’s been such a key to our success. A lot of great people that know how to communicate and care. This award is for them.”

The recipe for continued success at Sutter Roofing begins with safety, which is viewed not only as a necessity, but a business differentiator. Embracing technology, the company emphasizes accurate estimating and purchasing related to jobs, and has several internal tools to measure accountability at all levels.

That said, there’s a high degree of trust and expectations placed on all levels of leadership. Sutter’s hands-on experience taught him that the crew foreman’s ability to relay the scope and requirements of the job to the others on the team is a high priority. But he said he believes that having a highly-effective superintendent is extremely important to overall success.

The ability to adapt has always been part of Sutter Roofing’s strength, and is driving its future. That became crystal clear over the past 18 months. Like many roofing contractors, the challenges brought by the COVID-19 pandemic pushed the company and personnel to work differently while still maintaining the same goals.

“There were a number of challenges in the last year, starting with the pandemic,” said Brad Sutter, who oversees critical operations as company executive vice president. “COVID-19 really forced our people to communicate and really look at the ‘why?’ behind things. We shut offices, we had people with COVID-19 and that were just coming out of it when things opened up, and then our people had to make other adjustments with the material shortage issue. It’s all really forced us to be super-nimble.”

The industry-wide supply chain shortage is having a particularly significant impact on the commercial roofing market, and driving some to call for changes in how materials are made and distributed. Manufacturers are listening, and said on a recent telephone town hall organized by the National Roofing Contractors Association that the pain of 2021 has some of them evaluating future strategies. 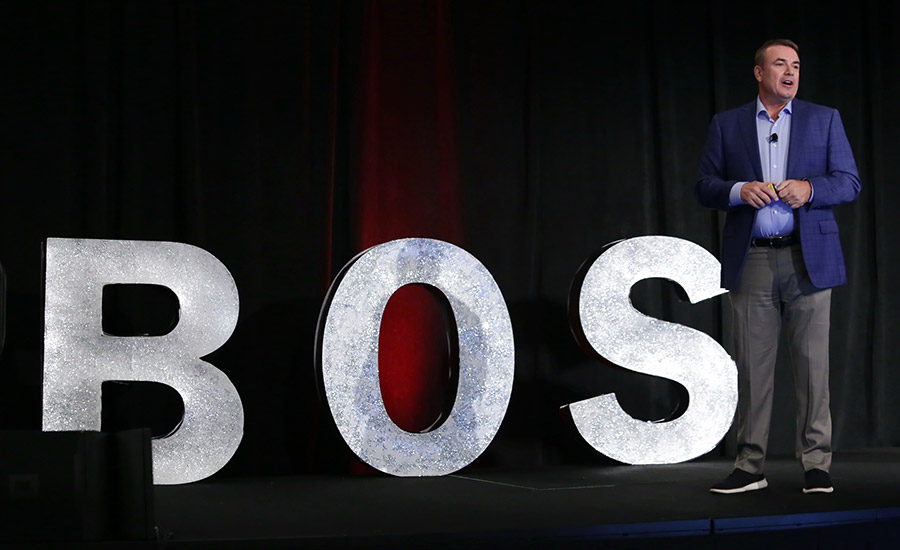 “It takes a team all the way around to have the level of success that we’ve had, and it goes back to our tremendous people. Looking at our phone extension list the other day, I’m proud to say about 90% of them are promoted from within. They’re long-term employees, and that’s been such a key to our success.”— Doug Sutter, pictured speaking at the 2019 Best of Success in Miami.

Doug Sutter was among the most vocal contractors on the call, declaring that his company did everything right, including ordering early from trusted suppliers, to avoid the crunch. Yet his company was still denied critical products on some jobs.

With little relief anticipated in the short term, Sutter Roofing is again adapting and leadership remains optimistic. Learning how to navigate these particularly tough times aren’t easy, but will also pay dividends long-term.

“We have to be flexible enough to be able to jump on different types of projects, and from estimating to operations, to purchasing, it’s taking a tremendous amount of coordination and communication through our weekly meetings, sales calls and things like that,” Brad explained. “We’re really working on getting everyone pulling in the same direction and communicating early about problems.”

While acknowledging the company is deserving of the RC’s Contractor of the Year designation, Sutter again invoked his Lombardi-like philosophy of chasing perfection.

“I probably still don’t think we’re there, or ever will be, but we’re darn close,” he said. “And I’ll take darn close.”

Roofing Contractors Can Get the Top Rep Rush

Roofing Contractor Announces the 2019 Residential, Commercial Contractors of the Year