How Am I Supposed to Vent this Attic?

Air in (intake vents). Air out (exhaust vents). That’s attic ventilation in a nutshell. But it’s not always that simple depending on the complexity of the roof’s configuration. We asked roofing contractors who attend our best practices in residential attic ventilation seminars: "What roofs are the most challenging to properly ventilate and why?" These roofers did not design the houses, nor did they build them. But they were hired to replace the roofs and address the attic ventilation.

To help fight potentially damaging heat and moisture buildup inside an attic as well as ice dams in cold climates, attic ventilation should be a balanced system of intake vents (in the soffit/overhang or low on the roof) and exhaust vents (at or near the roof’s peak). The following types of roofs were identified as particularly challenging to achieve balanced attic ventilation. As you’re about to read, roofing contractors do the best with the cards they’ve been dealt. 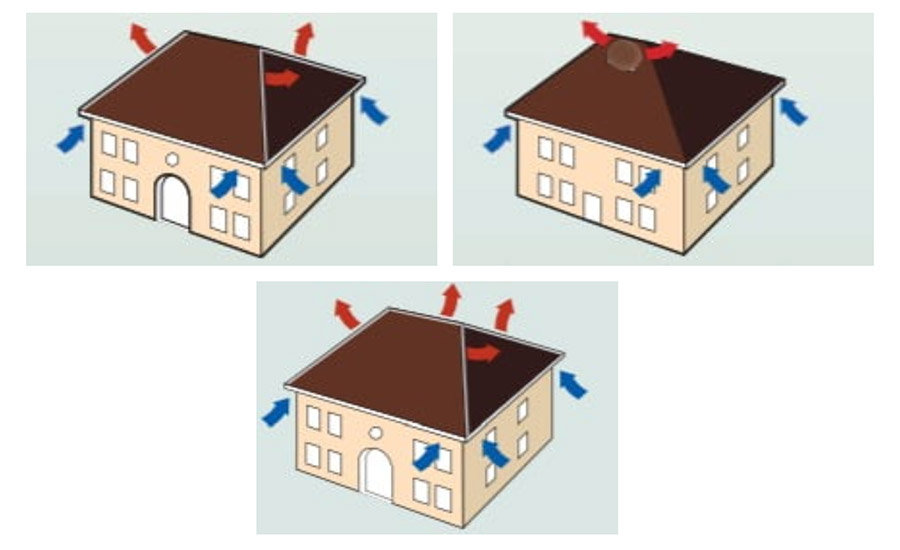 A “hip roof” has limited or no horizontal roof peak (ridge) but does have multiple diagonal “hips.” Hip roofs often have elevation changes from the peak of one portion of the roof to the next portion below. Roofing contractors refer to it as a “cut up roof.” One of the reasons this roof type is challenging is its design does not automatically allow the use of horizontal ridge vents for exhaust. Many contractors prefer and are accustomed to using horizontal ridge vents. That leaves Plan B: a roof-mount power fan or ridge vents designed for the hips. Plan C is not very practical: a bunch of individual box vents or wind turbines.

“Hip roofs are the most challenging because you need to take extra steps in order to properly vent the attic space,” said Richard Turner, owner, RJ Turner Remodeling LLC, in Winston Salem, N.C. “Not only is the horizontal ridge reduced but there’s also limited amount of soffit area for intake ventilation.”

“Many homes in the DFW area have no basements, so storage is in the attics, which are built higher and thus reduce the amount of horizontal ridge, sometimes to only a few feet,” said Jake Jacobson, vice president of sales, SF5 Construction & General Contracting, Little Elm, Texas. “With these cut-up style of roofs there are many pockets of dead air that need to be considered, evaluated and addressed.”

“Steep, cut-up hip roofs with multiple angles and heights are tough,” Bellis said. “These roofs usually have large attics with limited area up top to exhaust.”

Clayton Putman, commercial project manager with Elite Roofing in Denver, said depending on the dimensions of the house, it can be hard to get adequate exhaust ventilation on the structure of a hip roof.

“Typically I try to add correct ridge venting if possible; if not, I like the idea of solar powered roof-mount power fans," Putman said.

“There’s such a lack of sufficient ridge length for standard horizontal ridge vents,” he said.

While there are options for exhaust ventilation on these challenging hip roofs – power fans and diagonally installed ridge vents, for example – both the contractor installing them and the homeowner living in the house have to feel confident with the choice. Power fans have motors that one day will need replacement. Ridge vents for hips are less established in the market than horizontally installed ridge vents. 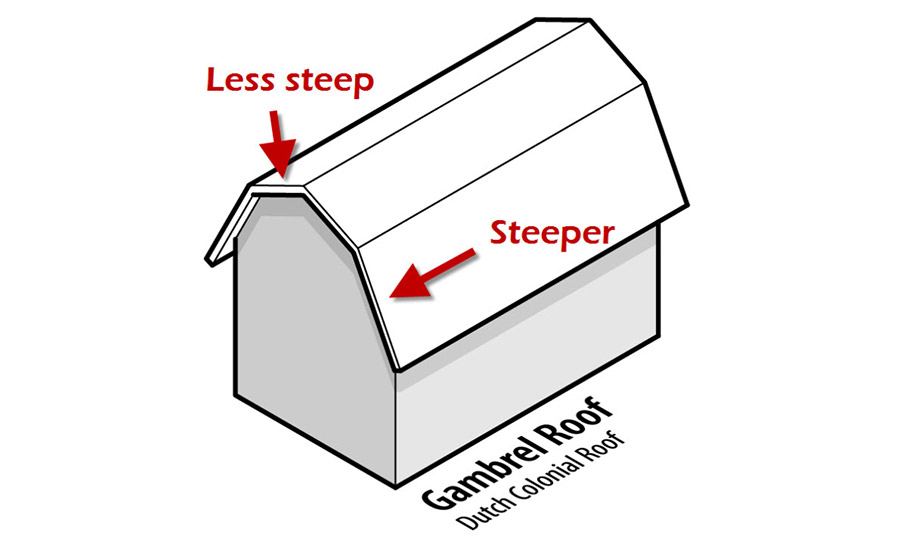 A gambrel roof with its challenging angles.

No Overhang, No Intake Airflow

“Roofs with no overhang have no area for soffit vents, which means they do not have intake airflow,” said Sue McCollum May, owner/manager of A Better Way Construction and Roofing in Lincoln, Neb.

Without intake airflow, the attic ventilation system will be out of balance and cannot perform correctly. Worse, it could lead to weather infiltration through the exhaust vents that are trying to pull intake air from somewhere, including themselves.

Trying to move intake air low on the roof to the exhaust vents high on the roof is no piece of cake when knee walls are involved, sometimes found in Cape Cod and bungalow style homes. The knee wall is a short wall (usually less than 3 feet in height) used to support the rafters.

“The closed off attic areas that they create make it especially challenging to be properly ventilated,” said Jeff Barnett, vice president of sales with Barnett Roofing in Canton, Mich.

Jeff Nunham, owner, Precision Roofing Services, of Lansing, Mich., agreed that getting the air from the eaves to the ridge is not easy.

"In particular, getting the air to flow through the cathedral part of the roof becomes difficult without sacrificing insulation R-value (its insulation capability)," Nunham said. "Often behind the knee wall it isn’t properly insulated or air sealed, which can lead to cold air entering the living space."

Inside Air Vent's Tips and Answers booklet, given to seminar attendees, we offer guidance for knee walls based on suggestions from roofing contractors in the field. However, implementing the tips can be tricky.

“Depending on what’s behind the knee wall, it may not be possible to get fresh air in at the eaves and have it make its way to the ridge,” said Nunham. “In those cases, we’ll use gable vents to achieve cross flow behind the knee wall. If the homeowner and the structure of the roof allows, we will make an air passage along the ceiling rafters to the ridge, but it’s always a pain.”

A gambrel roof is usually a symmetrical two-sided roof with two slopes on each side. The upper slope is positioned at a shallow angle, while the lower slope is steep. And now it needs a new roof.

“With a gambrel roof, most of the time the drywall is tight to the rafters, which are jammed full of insulation without an airflow gap,” said Ron Bastian, owner and president, Bastian Roofing in Richfield, Wis. “There is no easy way to exhaust the steep part and add intake ventilation for the upper part.”

Just like the other contractors we talked to, Bastian does the best he can with the challenging design.

“We’re only able to ventilate the upper section of the roof with intake vents at the transition; making sure there are insulation baffles in place to allow the air to flow to the ridge vent at the peak," he said. 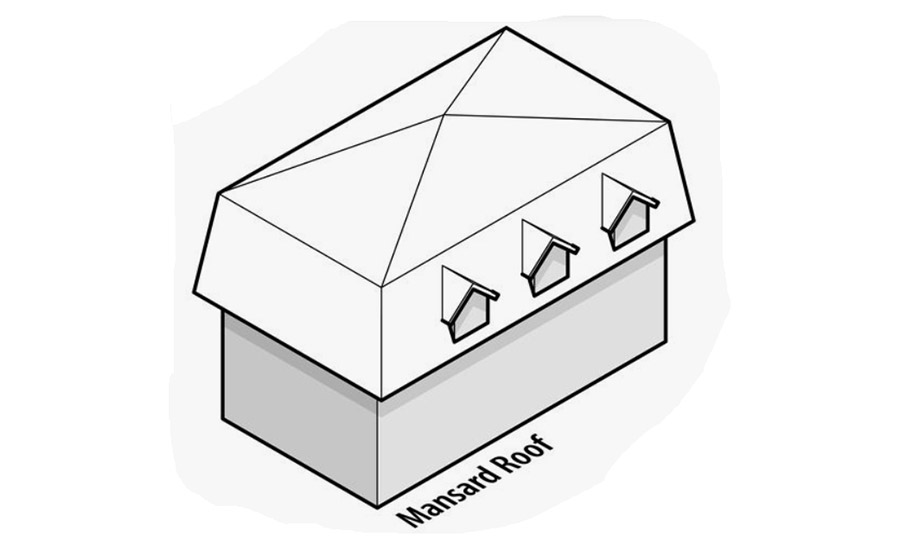 A mansard roof is a four-sided gambrel-style hip roof that has two slopes on each of its sides.

Just in case a gambrel roof isn’t challenging enough, there’s the mansard. A mansard roof is a four-sided gambrel-style hip roof that has two slopes on each of its sides. The lower slope often has dormer windows and is steeper than the upper slope.

One of the challenges with the mansard roof is at the point where the roof pitch changes from the steep eave area to the shallow top. This elbow must be open so that there is a path for the air to move from the continuous soffit vents under the steep slope through the break into the upper shallow slope. In situations where there is not an air path through the break, roof-top intake like The Edge Vent could be used at the elbow (assuming that it can be installed so that the louvers will be horizontal, and the vent can be installed properly to prevent leaking).

Another option on mansard roofs is to use gable louvers – if the roof line has gables or it may have gable vent areas designed into the peak of the roof, similar to dormers, except in line with the ridge. Under these cases it may be possible to vent the upper shallow slope portion through the gables and use undereave vents to ventilate the smaller steep slope areas.

Not every residential roof is designed with the practicality of providing balanced intake and exhaust ventilation in mind. Roofing contractors who walk into such projects are doing the best they can.

Airflow in the Attic Delivers More Than Roof Protection