In the short time since its founding, Four Twelve Roofing established itself as one of the top roofing contractors in Baltimore — and it’s got the accolades to prove it.

Four Twelve earned a Fast 50 Award from the Baltimore Business Journal in 2020, back-to-back Top Rated Local recognitions, and made the Inc. 5000 list in 2020 after seeing an incredible 3,049% increase in revenue, earning it the 122nd spot on the list.

It’s a result of the passion co-owners Sam Frank and Shea Fredrick have not only for providing top-notch work, but for being a positive force in the community they love.

“We take each new project as an opportunity to build a relationship and positively impact our Baltimore community,” Frank said. 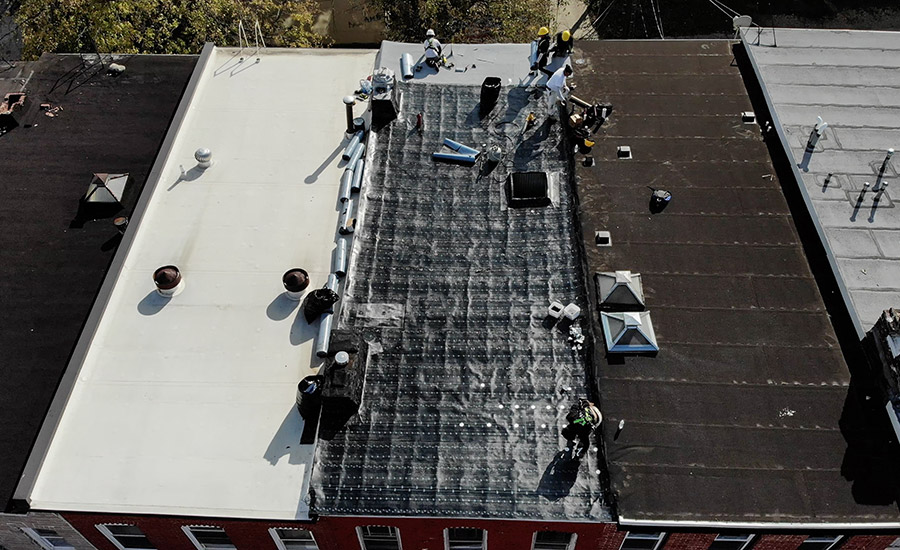 To retain its talented workers, Four Twelve invests in recurring training for all of its divisions.

As residents of "Charm City," they were interested in restoring their city following the Great Recession through the Vacants to Value program. In 2013, they purchased a row home, and the experience of restoring the vacant 1917 structure proved infectious. Together they formed Four Twelve Development, a name inspired by the address of their first restored home (412 E. Lanvale St.). In 2018, Four Twelve officially started working as a roofing company, eventually changing its name to reflect its new mission.

The company grew at an impressive rate. At first it consisted of Frank, Fredrick and two other staff members. As of 2021, they have 55 employees split among administrative support, sales, and production — the latter further split into reroofing, small projects, repairs, and more recently, a service division. Thanks to its growth, Four Twelve is able to provide 401(k) and paid holidays to its employees.

“We also try to be understanding as owners of people’s personal lives, making this a more colloquial office environment,” Frank said. “We give bonuses based on performance — personal performance and business performance.”

It’s the longevity of these employees that gives Four Twelve an edge. Since its inception, the business focused on producing high-quality work by investing in recurring training programs, including twice-weekly sales training and weekly training for field crews and office staff. To keep them safe, project managers go through OSHA training, and crews make use of tie off and flag protocols for various installations.

But even a company like Four Twelve is feeling the effects of the industry’s ongoing workforce shortage. Frank said recruiting talented roofers and sales professionals has been difficult, made all the harder when the pandemic took hold.

“Working hard to keep all of our staff during the pandemic and not let people go has made us a stronger and tighter-knit group, something that I think will help our camaraderie as a company as we continue to grow,” he said.

And grow it has. As previously mentioned, the company saw massive revenue growth that placed it at number 122 on Inc. Magazine’s 2020 Inc. 5000 list, which tracks the fastest-growing companies in the country. This growth gave Four Twelve the ability to endure the pandemic, going back to work as soon as April 2020 despite shutdowns in March.

“We have done a fair amount of new things. Leaning on Google Meets and Zoom for company meetings and estimates has been a huge one. This has actually helped us to improve from a productivity standpoint,” Frank said. 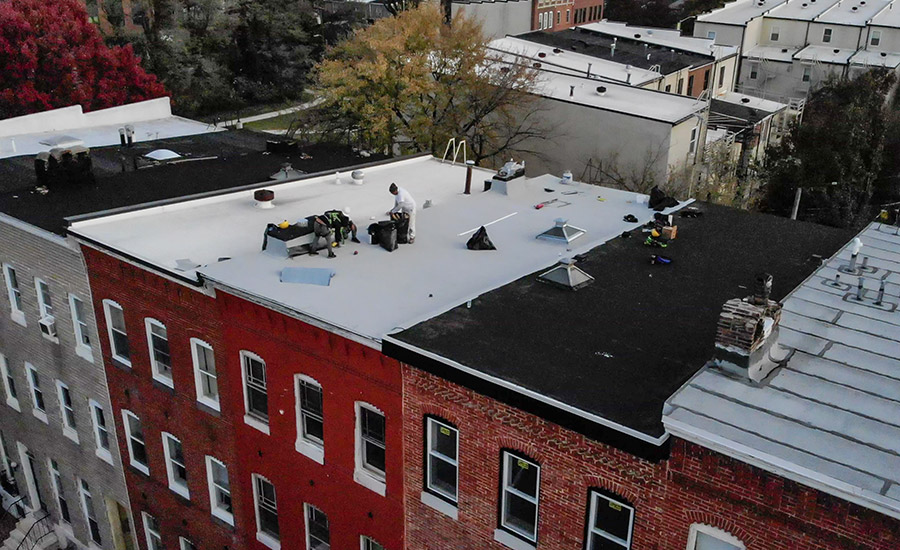 Building a reputation has been as important as building resilient roofs for Four Twelve. Marketing efforts involve everything from traditional channels like radio, print and door hangers to social media and SEO. Frank said good customer service, as well as educating building owners, comes naturally from being residents of Baltimore.

“One common thread that runs through the majority of our client base is our connection to Baltimore City,” Frank said. “Me and my business partner live in the city, and take pride in building quality projects for businesses and individuals, and being a part of their home-making in this town that we love and live in.”

The hard work has paid off, as the company has an A- rating with the Better Business Bureau and gained accreditation in 2021. Its online presence is also notable, with a 4.8 out of 5 stars with more than 250 Google reviews, and was a Top Rated Local Business in Maryland in 2019 and 2020. Its good name has led to tackling interesting projects, from the popular Charmed Kitchen to the Ottobar indie rock club.

Investing in its community goes beyond providing roofing services. The company created Baltimore Roof Trust in 2019, a giving back program that looks for direct and organic ways to connect with families and organizations that support the city. The program was inspired by the Every Shingle Heart initiative started by Florida-based Reliant (formerly Reliant Roofing).

The program provided a roof to a retired firefighter in 2019. Last year, Four Twelve donated a roof to two candidates: a woman in her early 20s caring for her brother and grandmother, both with disabilities; and a nonprofit that supports the mental, emotional and physical health of people impacted by violence.

Frank admits that there have been growing pains, partly due to saying “yes to maybe too many projects,” but hopes to expand into other segments like commercial or property management to maintain its momentum.

“If someone has a crazy idea, we are the ‘yes’ guys! This leads to interesting projects and challenges in terms of the types of construction work we run into as a team,” Frank said. “No project is too difficult, we believe, for us to take on.”