Among the many reasons to give residential attics a properly balanced ventilation system of intake vents (in the soffit or low on the roof) and exhaust vents (at or near the roof peak), is the impact it can have on the life of a shingle.

Research by Joseph Lstiburek, Building Science Corporation, Westford, Mass., sites a 10% service life reduction on shingles installed above unvented attics. When I share that statistic with the roofing pros in the audience of our best practices in residential attic ventilation seminars, eyebrows begin to raise, followed by comments such as, “Are you sure the number isn’t higher?” and “Based on my experience that number sounds too low to me.”

We polled roofing contractors and asked: “In your local field experience, what percentage of shingle life reduction do you see due to incorrect or zero attic ventilation?” The results: 24% shingle service life reduction. That explains the raised eyebrows.

“Ten percent minimum. But where the roof systems are completely choked with no breathing, it’s closer to 20%,” said Bill Corley, president of Style Exteriors by Corley in Oak Lawn, Ill.

“It’s at least 10%. In some extreme cases we have seen up to 50%,” said Patrick Readyhough, president of Pond Roofing Company Inc. in Fairfax, Va.

“In my professional opinion, we see 20-23% shingle life reduction due to zero attic ventilation on the East Coast,” said Greta Bajrami, CEO of Golden Group Roofing, in Westborough, Mass. “The roofing systems rely heavily on attic ventilation, especially in the Northeast. When zero ventilation is present on the roof system, the roof wood decking begins to rot, causing premature aging in the roof system asphalt shingles.” 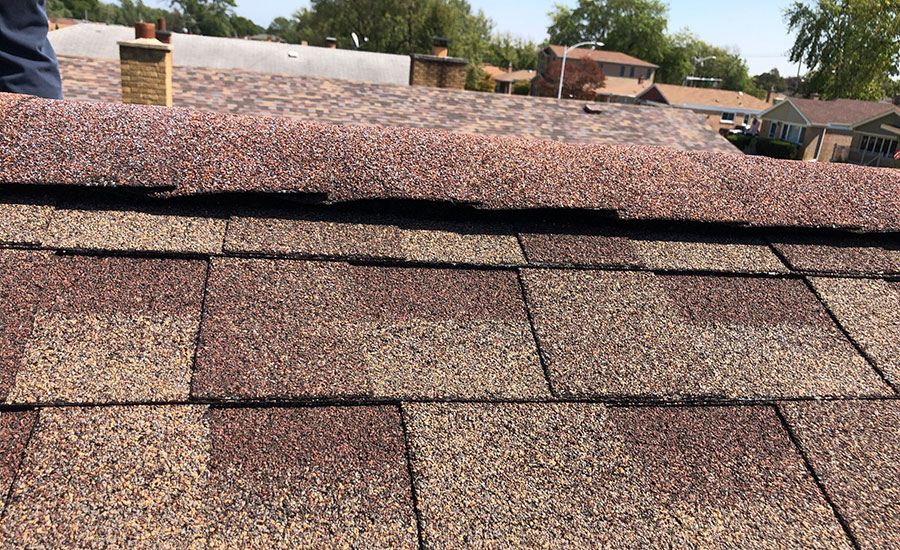 What does a reduction in shingle life look like? The roofing professionals we talked to described it as:

We dug a little deeper, starting with granule loss.

“We examined a roof that had nearly complete granule loss and we believe lack of attic ventilation was a contributing factor,” said Trevor Atwell, owner of Atwell Exterior Services LLC, in Greenville, N.C.

“The last roof I saw without proper attic ventilation had 3-tab shingles that were very dry and brittle," Turner said. "The shingles were curled up on the end and had an excessive amount of granule loss.” 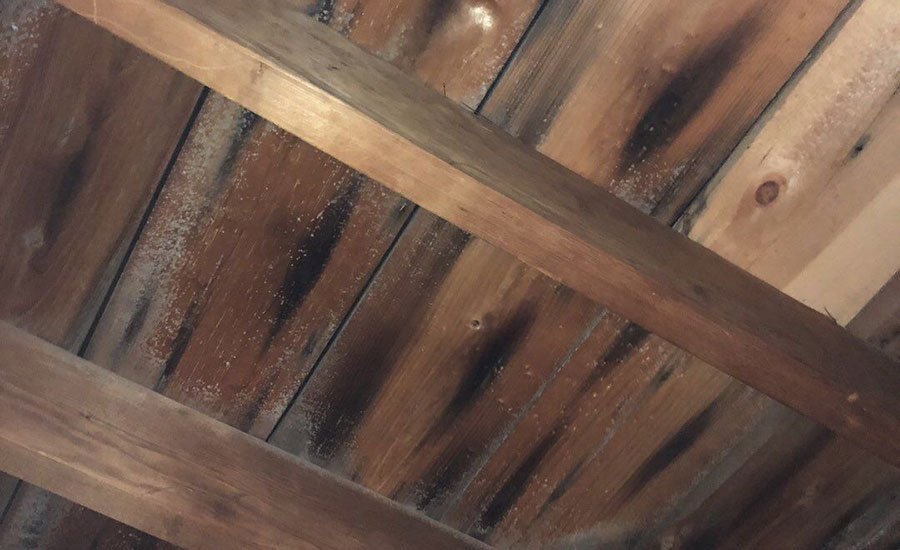 Signs of moisture in the attic, possibly due to poor ventilation. Photo: Bill Corley.

“In Colorado, the majority of the homes we see have inadequate attic ventilation. As a result, blistering and granule loss are very common,” said Clayton Putman, commercial project manager with Elite Roofing in Denver.

There are other red flags pointing to shingle life loss.

“We find premature dry out, cracking and fracturing throughout the shingles,” said Sabrina Johnson, president of KDCO Home Improvements Inc., in Akron, Ohio.

“One example was a fiberglass shingle; and I believe that lack of attic ventilation caused both vertical and horizontal cracking down to the glass mat of the shingle,” said Jeff Barnett, vice president of sales at Barnett Roofing and Siding in Canton, Mich.

Jason Avery, partner/sales manager, Lakefront Roofing and Exteriors LLC, in South Haven, Mich., said attic ventilation is one of several variables that impacts the life of the shingle along with roof pitch (its steepness), trees overhanging the roof and the insulation.

“When attic ventilation is incorrect, cracking, curling and seal failure were all present on the shingles," said Avery.

If a shingle stops sealing properly, it opens the door to possible blow-off and leaks. That impacts the roof deck and the house interior potentially.

“We had a project that comes to mind with blistering shingles, premature curling and the plywood underneath was shot,” said Readyhough of Pond Roofing.

If the roof deck is affected, that increases the severity of the problem. It’s bad enough having to replace the shingles earlier than their life expectancy.

“We worked on a project with a house addition. The roof decking was wavy like a roller coaster. The decking was rotted and unsafe to walk on. There was zero attic ventilation,” said Sue McCollum May, owner/manager, A Better Way Construction & Roofing, Lincoln, Neb.

The Consequences: Cost and Property Damage

Cost is an obvious consequence of having to replace shingles before their full service life is reached. There’s time, labor and materials involved in replacing prematurely aged shingles. Who pays?

“We see roofs that are 10 years old and are toast,” said Bellis. “Often it’s the south and west slopes with extremely accelerated aging. Improper attic ventilation surfaces first on those slopes because of the increased sun exposure they receive. We call it, ‘The Tale of Two Roofs.’”

The less obvious, but no less important consequence, is property damage. These prematurely cracking, curling, fracturing, blistering shingles with excessive, if not complete, granule loss, cannot properly protect the house from Mother Nature. Will this be discovered before or after weather such as wind, rain, snow and ice take their toll? And how severe will the damage be before it is uncovered? Will the roof deck be impacted? Will the attic insulation be compromised? Will the damage make its way to the interior ceilings, walls and beyond?

From Wrong to Right

We asked the roofing professionals what specifically was wrong with the attic ventilation in these documented cases of shingle life loss. Here are some examples and how it was fixed.

Soffit Vents, but No Exhaust Vents

“It was a hip style roof. We added ridge vent to improve the attic ventilation and get it balanced, hoping to extend the life of the roof,” said Putman of Elite Roofing.

Exhaust Vents, but No Intake Vents

“We had a project with gable vents and a couple of can vents (also called box vents). Those are both exhaust vents. This house had no intake,” said Jeff Nunham, owner of Precision Roofing Services in Lansing, Mich. “The shingles on this roof were curling and brittle. We blocked the gable louvers (it’s best to not have two different types of attic exhaust vents on the same roof above a common attic so as to avoid short-circuiting the airflow), removed the can vents, installed ShingleVent II ridge vent, installed The Edge Vent (roof-top intake low on the roof), and inserted insulation baffles in every bay.”

“The house had no attic ventilation. We installed ridge vent and soffit vents. It has helped cool the upstairs. Of course, we first had to replace the roof and the roof deck,” said May of A Better Way Roofing.

“This project had a large saddle built over three other adjoining roofs,” says Ron Bastian, president at Bastian Roofing in Richfield, Wis. “There was no possible area for intake and nothing cut open into the common attic. We rebuilt the saddle area making a larger spillway on the bottom and adding an area for intake by cutting the under decking open into the common attic.”

Bastian said the same scenario happens when an addition is built over existing roofs and air has to travel even farther but there is no pathway for the air.

“There was no soffit ventilation, and, even though they had a ridge vent, no one cut the slot in the deck for it to truly exhaust,” said Johnson of KDCO Home Improvement Inc. “We removed the gutter line soffit, cut an intake airflow opening all around the house, and installed vented soffit. We then cut the needed slot for the ridge vent and installed brand new ridge vent.”

Wrong Type of Exhaust for the Roof Design

“This roof had individual box vents with rough-cut holes under each vent limiting its exhaust airflow,” said Bellis of EPIC Exteriors. “It would have been better served with externally baffled ridge vents since it had a good length roof peak. That’s what we installed after we removed the box vents, closed off the openings and added more rectangular undereave vents around the perimeter of the house.”

“On that project with extreme shingle granule loss and sweating inside, the roof had a mesh roll ridge vent combined with a couple of mushroom vents low on the roof for intake (box vents that are designed to be exhaust, not intake),” said Corley of Style Exteriors by Corley. “We removed the mushroom vents and installed roof-top, shingle-over intake The Edge Vent. We then replaced the mesh roll ridge vent with the externally baffled ShingleVent II ridge vent. Now the new roof has continuous airflow low to high.”

“The roof we worked on that had blistering so severe it looked like hail strikes only had gable vents on each end for its overall attic ventilation," said Jacobson of SF5 Construction. “Gable Vents only provide limited cross-flow of air in the attic and certainly do not give the roof deck a low to high airflow. We covered up the gable vents from inside the attic, installed The Edge Vent for intake on the eaves and then installed externally baffled ShingleVent II ridge vent.”

By including a properly balanced attic ventilation system and avoiding the mistakes detailed here, the likelihood of the shingles installed on the roof reaching their full life expectancy is improved.