Looks can certainly be deceiving. On the outside of the house, JR Lynch, managing partner of Fortress Exteriors in Fishers, Ind., could see fully vented soffit while preparing an estimate for a new roof. But upon further inspection, underneath that fully vented soffit was 100% solid wood preventing any ventilation through the attic.

In our podcast interview with Lynch, he explained the fate of the roof that day and his process for confirming if proper intake airflow really exists beyond an initial visual check.

“Never trust vented aluminum or vinyl soffit without checking it,” Lynch says. “My attic inspection that day revealed no light transmission through the vented soffit. Without seeing light, I immediately questioned if the airflow was making its way into the attic. The roof deck was wavy from the outside. It had mold on the inside. That house needed a full roof replacement and roof decking replacement, along with full soffit and fascia replacement. And it was only a 10-year-old roof.”

Lynch says a standard procedure for each roof estimate at Fortress Exteriors is to access the correct quantity of attic intake and exhaust vents and that they are actually functioning – which includes confirming the holes are cut to allow air to flow through the installed vents.

And while it may be tempting for a roofing contractor to rely simply on his or her initial visual inspection of the attic vents from the exterior of the house, Lynch says take a closer look. 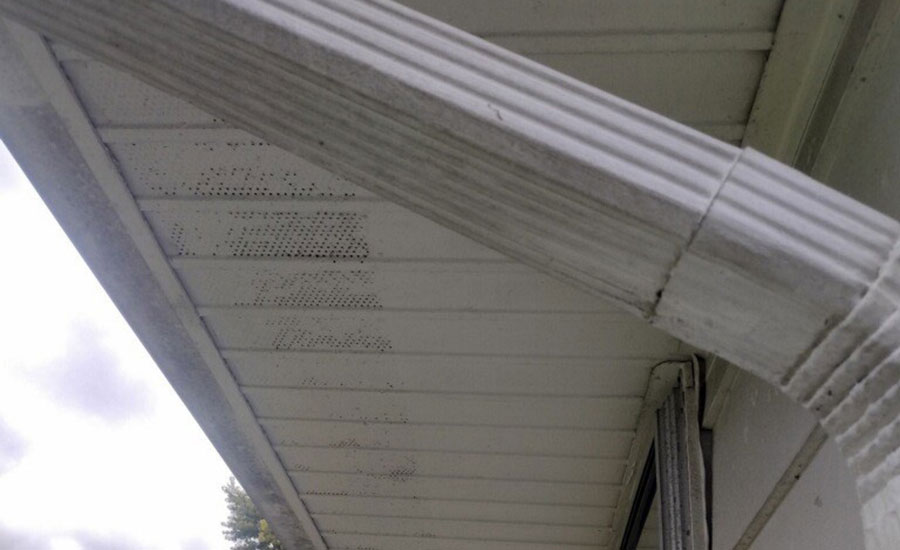 Sometimes a visual inspection alone won't cut it. Properly inspect ventilation to see if it's actually taking in and exhausting air.

Lynch said it might be tempting to simply walk around the house and count the attic intake and exhaust vents, but he considered this to be a “short-cut way to do it.”

“Getting into the attic to make sure there is light transmission through the vents is key,” he says. “And if there isn’t light transmission, why not? Find out. I think that separates one roofing contractor from another. Who is actually going to take care of the homeowner the best means possible?”

When Lynch does not see light coming through intake vents during his attic inspections he digs further.

“Generally, what I’ll do during my exterior inspections of the house is take a thin metal rod and stick it through the intake vents to see if it hits anything solid or if it’s clear and free. If it hits something solid, the airflow is blocked,” Lynch says.

Blocked airflow is problematic because to work properly, attic ventilation must be a balanced combination of intake vents – placed in the soffit/overhang of the house or low near the roof’s edge – and exhaust vents installed at or near the peak of the roof. This balanced combination of intake and exhaust airflow helps to remove potentially damaging heat and moisture buildup from the attic. It also helps to fight ice dams. Without both the intake and the exhaust vents, the attic does not have airflow.

Intake airflow specifically is the number one mistake in residential attic ventilation based on our tracking of calls to our Customer Service Hotline and the Q & A sessions of our seminars across North America. Lynch is not surprised. 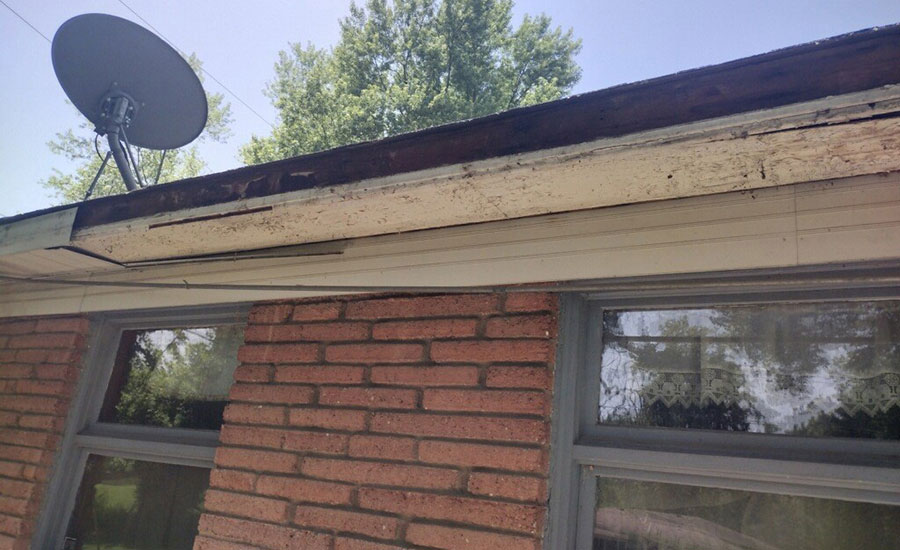 A prime example of poor ventilation, where solid wood blocked the soffit.

“In my experience, most home builders and replacement roof contractors generally install an appropriate quantity of attic exhaust vents, generally,” Lynch says. “But it’s the intake ventilation that is lacking. And if we do not have a balanced flow of attic air, we’re not doing any favors for the brand new roof I’m about to install.”

It could also be that some roofing contractors do not want to bring up the need for proper intake airflow because they don’t want to ask for more money since their goal is to be the lowest priced roof – they want to be “Mr. Low Bidder,” says Lynch.

“One of the ideas that I bring to the table when talking with homeowners about the longevity of the roof and maximizing its life expectancy is this: You can have the best muffler in the world on your car but if you cover your hand over the airflow intake, that muffler isn’t going to do its job,” Lynch says. “So I tell homeowners, if you want your roof to last longer than 10 years, we have to provide a balanced flow of intake and exhaust ventilation through the attic.”

Lynch has a suggestion for fellow roofing contractors.

“Getting into the attic to make sure there is light transmission through the vents is key. And if there isn’t light transmission, why not? Find out. I think that separates one roofing contractor from another. Who is actually going to take care of the homeowner the best means possible?”

“Don’t be the roofing contractor who simply is installing the roof, takes the money from the homeowner and moves on to the next roof,” he says. “If you want to be the best professional you can be in this industry, and to have repeat customers and referrals, then do your due diligence and be that professional."

This means taking the time to do inspections properly. In doing so, contractors will be rewarded with a reputation for doing jobs right, which in turn results in your company’s name getting around.

Don’t be Focused on Price

Lynch hopes homeowners will not dismiss the roof estimate that factors in properly balanced attic ventilation just because it’s the highest price or because it’s the only estimate that lists attic ventilation. He has appreciation for the roofing contractor who determines a new roof is not needed but improved intake airflow is needed in an effort to prolong the life of the current roof.

“If a professional salesperson from the roofing contractor company has done his or her due diligence and is recommending not replacing the roof but to instead add more intake ventilation to balance with the attic exhaust ventilation, that salesperson is actually looking out for the best interests of that homeowner,” Lynch says.

Lynch urges both homeowners and roofing contractors to not overly focus on price.

“Price is not the biggest issue you should be worried about,” he says. “For homeowners, focus on roof longevity. For the professional roofing contractor, focus on doing everything for that roof properly. Having to tell a homeowner 10 years after the roof is installed that a new roof is needed because the fully vented soffit was 100% blocked from day one is not fun. That’s actually worse news to the homeowner because, to them, they now feel like they wasted their money on that original roof.

“Don’t be the homeowner who regrets not spending the extra dollars for a properly installed roof. And don’t be the roofing contractor installing the new roof incorrectly to begin with.”

Paul Scelsi is marketing communications manager at Air Vent Inc., and leader of its Attic Ventilation: Ask the Expert™ seminars (www.airvent.com). He hosts the podcast, “Airing it out with Air Vent,” and he’s the chairman of the Asphalt Roofing Manufacturers Association Ventilation Task Force. He is the author of the book, Grab and Hold Their Attention: Creating and Delivering Presentations that Move Your Audience to Action