Workforce woes aside, commercial roofing contractors are looking forward to another strong year while gearing up for the industry’s future.

Whether new or old to the roofing industry, roofing contractors learn very quickly that the fruitful fortune of one good year could be followed by dry spells the very next year, or two, or more. Forecasting properly is essential for anyone looking to stay relevant in one of the most rapidly-changing segments of the construction world.

But contractors — usually the more experienced ones — also know that prognosticating isn’t an exact science. Too many factors, ranging from economic indicators and political policy shifts to building materials costs and speedy technological innovations, can all drastically impact a company’s bottom line as 2020 approaches.

So, we at RC are looking to aid in that effort with our annual survey of roofing contractors to identify commercial roofing trends as we head into not just a new year, but prepare to launch the next decade.

With the help of experts from BNP Market Research — the survey and research arm of RC’s parent company, BNP Media — we again circulated our annual editorial study last fall and set out to identify the successes and challenges of the past year, while keeping an eye on the year to come.

Commercial Roofing in 2020 and Beyond

As the start of a new decade approaches, SOPREMA USA’s Matt Davis and a team of product managers sat down to discuss key issues impacting the roofing trade. They shared their thoughts and ideas on employee recruitment, increased product performance and sustainability... (read more)

The exclusive study took a deep dive into the commercial side of the North American roofing industry with responses from hundreds of roofing contractors about their business experiences in 2019 and the trends they see emerging as the new year approaches. Respondents consisted of roofing contractors that subscribe and receive RC.

The responding commercial roofing contractors indicated that their companies generate more than 50 percent of their overall annual revenue from commercial projects — whether that be in roof replacement, repair or new construction. The majority were men between the ages of 40 and 69, and the bulk said they’re part of companies that have between one and 50 employees that generated between $2 million and $9.9 million in revenue last year, the data showed.

At the outset, now still appears to be a great time to be a commercial roofing contractor. Many roofers are clearing through backlogs in busy markets across the country — finishing capital improvement projects spurred by the 2017 corporate tax cuts. Many of them are also adopting new technology in the form of software programs, products and services (like drones and virtual reality) to improve efficiency in the office and on the rooftop.

As the survey shows, most expect the commercial roofing sector to continue to flourish — in the United States, in particular, where commercial roofing demand is expected to grow by at least 1.6 percent per year over the next several years, with a value as high as $8 billion.

“This year was quite profitable considering our gross sales profits increased by 20 percent,” said Brian Clark, owner of DC Roofing & Waterproofing Systems Inc. in Costa Mesa, Calif. He said the four-year-old company generated $6.9 million in revenue and is already looking to expand into other areas around the state while the market is still hot.

“Prior to this year we were predominantly serving Orange County, but now we’re adding sales forces in northern California and increasing marketing personnel and advertising dollars to compete (around the state),” he said.

That level of optimism about 2019 and the near future was also reflected by the bulk of survey respondents.

Commercial sales of single-ply roofing and metal roofing again increased over the past year, and that trend is expected to continue. Nearly three-quarters (71 percent) of respondents said they expected to see single-ply sales to grow in 2020, which is just a touch lower, but still consistent with stated expectations for this year. 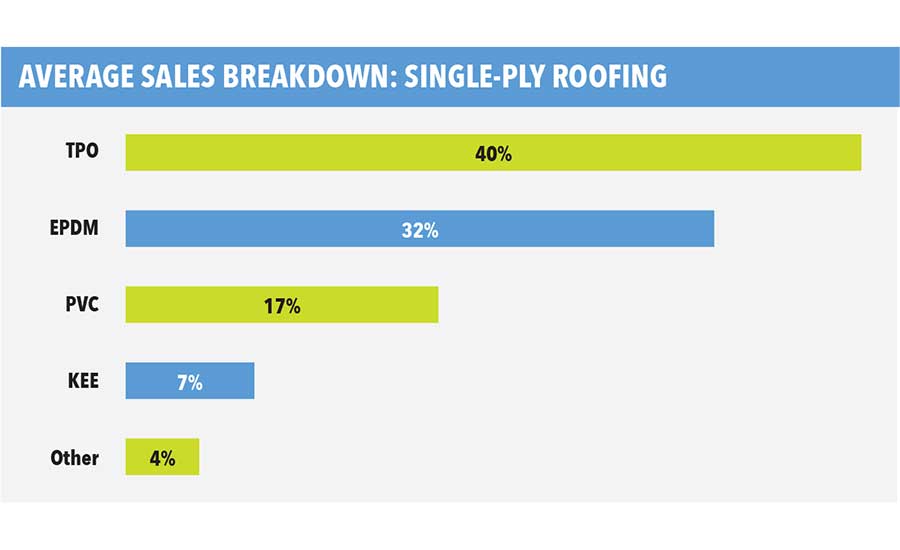 As far as roofing products and systems are concerned, little has changed from the past few years in terms of single-ply roofing dominating the scene.

Survey data showed that TPO and EPDM still make up the largest portion of all single-ply roofing sales, at 40 percent and 32 percent, respectively. PVC (17 percent) and KEE (7 percent) rounded out the majority of sales.

When asked to identify product sales trends, more than half of all commercial roofers responded that sales of coatings, metal roofing, solar, and sprayfoam all increased — along with single ply — from the past year. However, the growth of metal roofing and use of coatings continued to exceed traditional expectations. According to 2018 survey results, roughly 45 percent of respondents anticipated increases in coatings use during 2019. This year’s survey showed about 50 percent of respondents experienced increases in coatings work throughout most of 2019. 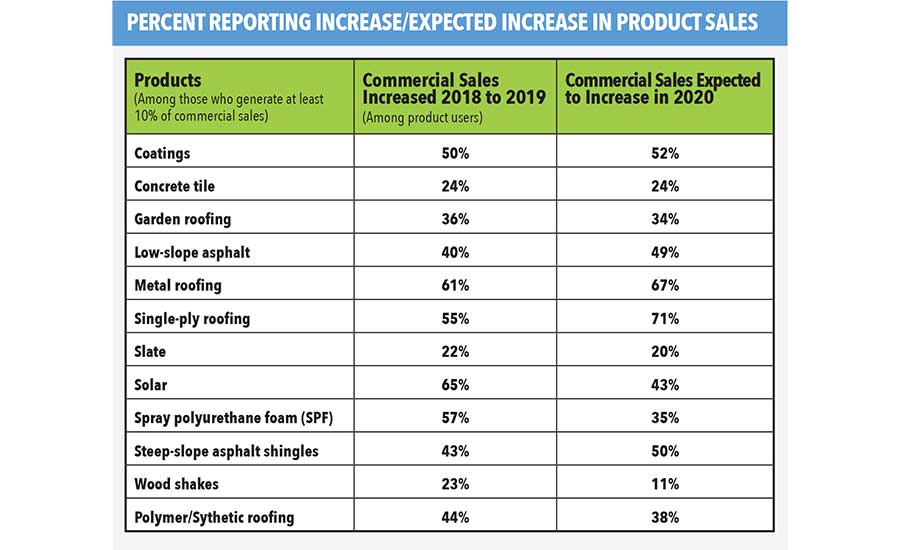 Environmentally-friendly and sustainable roofing solutions like garden roofing and solar roofs products also showed increases, but the sample size of those particular respondents was too small to draw significant conclusions.

Many are turning to their suppliers and manufacturing partners to help deliver time-saving solutions and product innovations. Some are already finding success in changing how they operate.

“Since the company’s inception, our business model has largely been based on a high volume of low bid work; however, in the last three years, we’ve been growing our negotiated sales and service division, which operates at higher margins,” said Lauren Reynolds, business development officer for Roofing Solutions LLC in Prairieville, La. “We expect the growth in this division to continue.”

The company has 85 employees that generated roughly $31 million in revenue last year. Projections for this year look better after what company officials considered a “down” year in terms of gross revenue.

Specifically, Reynolds said that upgrading company software systems and focused training on empowering employees have made the biggest difference.

“We have invested in specialty software programs for both our production and service divisions, and all employees are actively being trained in Steven Covey’s ‘Seven Habits of Effective People,’” she said.

By far, the biggest pain point expressed by commercial roofers is the lack of skilled labor to complete jobs that are currently on the table, and the lack of a pool of candidates to help develop and groom for the future.

Insurance costs (38 percent) and concerns over cash flow and company financing (24 percent) rounded out the top five perceived challenges identified in the survey. Safety enforcement for employees finished close behind in this category at 22 percent, the data showed.

The National Roofing Contractors Association (NRCA) estimates the roofing industry could use another 40,000 workers across the U.S. to meet current demand. That’s a daunting number to overcome on paper, but one that can be accomplished over time, if the industry starts now, according to NRCA CEO Reid Ribble. The organization is stepping up its political lobbying efforts with a national election looming this year, and continues to publicize the early promise of its ProCertification Program launched last year.

“Imagine if we had only started working on this 10 years ago,” Ribble said.

For their part, commercial roofing contractors are trying to address the workforce issue with several strategies. Chief among them are referrals from other current or former employees (73 percent), followed by referrals from family members (66 percent). Online job postings, social media recruitment and traditional newspaper advertising rounded out the list.

Survey respondents continued to show confidence in the commercial roofing market heading into 2020, and indicated they’ll likely step up their use of technology and engagement with manufacturing partners to improve efficiency. Yet those strategies alone won’t cure the existing backlog of jobs or bring the much-needed youth, talent and innovation the roofing industry craves to compete with other trades thirsty for recruits.

Improved technology and contractors willing to embrace it will be key for roofers seeking continued success in 2020, as will the ability for those able to demonstrate an edge over the competition when it comes to training and retaining skilled workers. With an election year on the horizon, the roofing industry could cross a critical juncture that may propel it forward as roofing companies and associations address certification, worker safety and career development. Time will tell.

The information contained within this article comes from Clear Seas Research. 2019 Roofing Contractor State of the Industry Report. Nov. 2019.