Do you consider yourself an optimist? If you don’t, but are a commercial roofing contractor, you might want to reconsider. That’s because if there was one unifying theme to summarize the results of Roofing Contractor’s 2017 Commercial Roofing Trends Study, it’s optimism. Rick Damato, RC’s editorial director, probably said it best when he saw the results, “Our respondents are bullish on the overall market for 2018 and the next three years.”

This is the second consecutive year of this particular study, and like last year, it focused exclusively on the commercial side of roofing. That’s not to say respondents couldn’t be involved with residential roofing, we simply only wanted their thoughts regarding the commercial segment of their businesses.

For context, the study asked what type of work roofing contractors performed. Replacement roofing accounted for half (50 percent) of the commercial business revenue for those surveyed, followed by new construction (21 percent) and repair (13 percent). The remaining 15 percent of revenue was generated by residential endeavors. 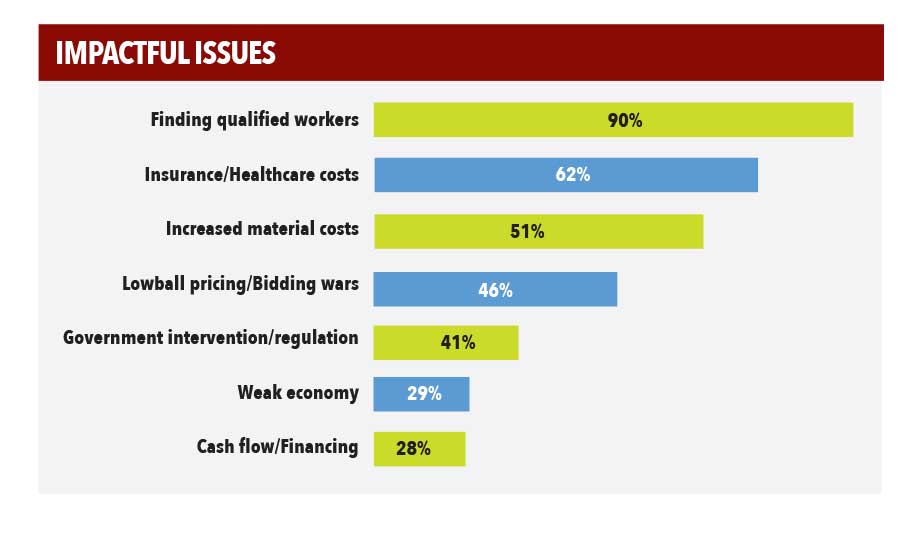 Building a Case for Holistic Innovation
by Matt Loos

The commercial roofing industry is a dynamic marketplace requiring continuous evolution to meet escalating demands for products, services and solutions that deliver competitive value and performance. Roofing Contractor magazine’s annual trends survey uncovers several key themes for the next phase of that journey.

The 2017 survey data reveals important shifts in the industry as manufacturers try to balance increased demand for products and services with a need to address labor challenges and invest in tools that make the entire process easier, from bidding through building. Now is the time for manufacturers to escalate our efforts to collaborate with roofing contractors as part of a truly holistic approach to innovation, driving increased efficiency and solutions through tools that will optimize labor and address their greatest needs.

The 2017 survey shows that finding and retaining qualified labor is one of the issues most likely to impact contractors in 2018, with 90 percent of survey respondents relying on employee referrals to fill their pipeline amid workforce issues in their markets. Generational changes are driving shifts in communication and work styles, as well as the overall perception of the work itself. On top of that, 87 percent of survey respondents reported an increase in labor costs this year, potentially cutting into opportunities to invest in other areas of their business.

While manufacturers have a continued responsibility to engineer products that are responsive to emerging health, safety and environmental requirements, an ongoing focus should also be on using innovative thinking to engineer effective products that help simplify and streamline the work required. These efforts, combined with integrated systems and processes and user-friendly technology, could help control labor costs and provide an even more productive, safe and engaged workforce on the jobsite.

Industry-leading products are only as good as the service and insights that manufacturers offer to support them. And innovation is only truly effective if it positively impacts customers. As the industry shifts and consolidates, processes and services must be integrated, responsive enough to update quickly and designed with the customer in mind.

Establishing an open, direct line of communication develops and reinforces critical relationships, enabling increased collaboration that, in turn, helps manufacturers engineer new products and enhancements. Ultimately, a more inclusive approach to innovation allows manufacturers the opportunity to serve as trusted partners to roofing contractors, and they in return.

With numerous technological enhancements at our fingertips, updates to critical systems can streamline information gathering, communication and decision-making while also making manufacturers more ingrained throughout each step of the bid-to-build process. More than 60 percent of respondents to the survey said they work with both aerial measurement and estimating software tools. A reliance on these tools offers an opportunity for manufacturers to work with roofing contractors to develop or enhance complementary ordering and tracking systems that improve efficiency and enable roofers to better manage and grow their day-to-day business.

This includes attention to key functions such as bidding, placing orders and support for their own customers − all of which would help contractors manage their bottom line, serve as proactive advisors to their customers and create stronger relationships.

Data should aid decision making, but it’s collaborative relationships that drive the industry forward. Innovation should be an integrated approach that involves manufacturing, product development, service and collaboration with contracting partners. These efforts will help stimulate innovation from the outside in, creating a more integrated approach to the commercial roofing industry. Firestone Building Products is committed to strengthening not only our products, but our processes, systems and partnership approach to enable roofing contractors to succeed.

What people expected in terms of overall sales for 2018 and the two years following was positive among respondents, as previously noted, with 65 percent expecting next year to look as good or better than 2017 in terms of revenue. More than three-quarters (76 percent) of respondents said they believe sales will continue to grow through 2020.

With regard to specific products they sold, nearly everyone surveyed was involved with single-ply products (96 percent). This involvement was followed by metal (81 percent), low-slope asphalt (71 percent) and coatings (62 percent) as the primary types. Unsurprisingly, given the number of respondents involved with it, single-ply roofing accounted for more than half of all sales (55 percent). Low-slope asphalt was second at 16 percent, and metal roofing accounted for 11 percent.

A fairly striking statistic brought out by survey respondents is the decrease in sales for garden roofing. Even though 21 percent of those surveyed say their companies are involved with this form of roofing, more than one-third of them say sales have decreased. Mitigating these losses, though, are others who say that sales have remained the same (31 percent) or increased (31 percent). It must be noted, however, that the study indicates a small sample size in this category, meaning there’s a risk for inaccuracy. But, taken with the relatively low sales of some other relatively sustainable forms of roofing types — such as solar, which didn’t garner enough responses to appear in this section — it does bring up the question of: Has the focus on sustainability from clients begun to wane?

Questions of sustainability aside, what do the commercial roofing contractors surveyed expect to see in product sales for 2018? Much like the 2016 study — where respondents said they expected big increases from single-ply roofing and coatings (and, as we saw, got them), roofers are optimistic for the same next year. About 75 percent said they expect a big increase in single-ply roofing sales, followed by coatings at 64 percent and metal at 52 percent. The survey indicates that 2018 sales for concrete tile, garden roofing, low-slope asphalt, polymer/synthetic roofing and slate are expected to remain about the same.

Digging deeper into what’s accounting for sales within single-ply, low-slope and metal roofing products, TPO is checking in at number one with 53 percent of single-ply sales, followed by EPDM (26 percent) and PVC (21 percent). Forty-six percent of low-slope asphalt product sales come from modified bitumen-SBS, whereas 26 percent come from built-up roof and 24 percent come from modified bitumen-APP. Architectural standing seam is the most popular form of metal roofing at 47 percent, followed by structural standing seam (24 percent), edge metal (22 percent) and metal architectural shingles/tile/shake at 6 percent.

Last year’s study put a spotlight on the labor issues prevalent in not just the roofing industry but in many construction-related trades. The same held true this time around as well, with finding qualified workers being the chief concern (90 percent) among respondents. That’s a 10 percent increase over last year’s results. Once again, companies were addressing workforce issues by several methods, including getting referrals from employees (90 percent), using online job postings (62 percent), getting referrals from family or friends (59 percent), or using the old standby of placing an ad within a local newspaper (41 percent).

What’s surprising is that despite the relative difficulty in finding qualified employees, companies generally haven’t changed their use of subcontractors to compensate. Only 29 percent of respondents say that their company’s subcontractor use has increased, while the remainder say usage has remained the same or decreased. This led them to say that most (85 percent) field labor is conducted by employees, with subcontractors tackling the remainder. These numbers are virtually unchanged from last year’s findings.

Another relatively unchanged reporting from last year are what people believe they’re paying in labor costs. Similar to the 2016 study, 87 percent of people surveyed believe their companies are paying more. How much more varies, but most (71 percent) say that costs are up anywhere from one to 10 percent.

When it comes to worker safety, fall protection remains the biggest concern (95 percent) followed by employee well-being (82 percent), which encompasses such issues as fatigue, heatstroke and sunstroke. Exposure to hazardous materials sits in third place at 41 percent. The new industry standards regarding silica dust fall into this category, and 68 percent of respondents were aware of these new standards and are primarily mitigating exposure to silica dust using respirators (51 percent), surface wetting (43 percent) and vacuuming (35 percent).

As for OSHA inspections to ensure compliance with the new standards and others, the average number of reported inspections is about one per year. However, about 54 percent of the professionals interviewed for this study say that they didn’t have a single inspection, which is identical to last year’s study.

When it comes to technological tool usage, responses indicate that companies still need some time for full use to catch on. For example, aerial measurement (68 percent) and estimating software (62 percent) are at the top, leaving drones, cloud computing and CRM software each being used by about 30 percent of respondents.

When we asked if people were planning on making an upgrade or addition to their business software, most didn’t know (37 percent). Nearly just as many (35 percent) said they weren’t investing in software while 28 percent indicated they were planning to. Of those who were planning to make additions or upgrades, 77 percent said the product they were going to get was estimating software. 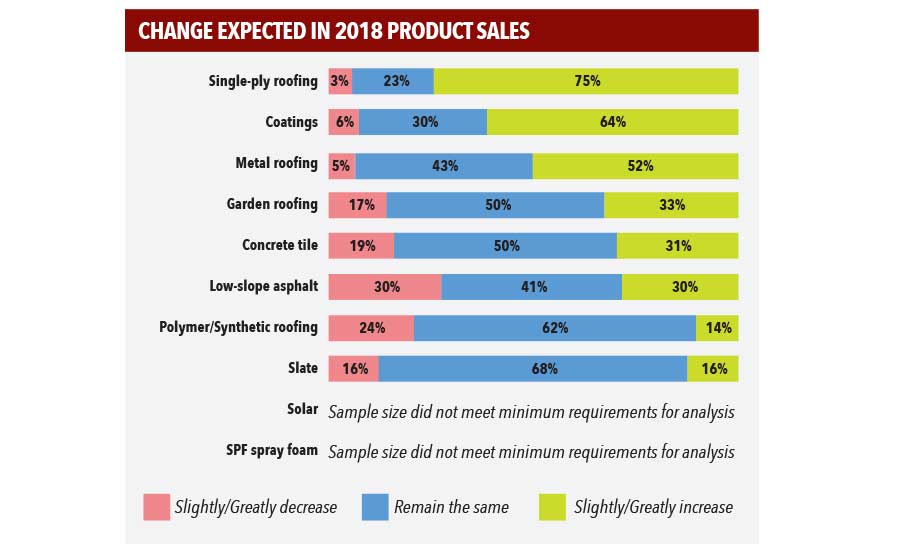 As was mentioned at the start, respondents to this year’s study showed that they continue to have the same positive outlook on the future like they did a year ago. Yes, a few things have changed, but it’s clear that the industry is marked by optimism. The data is suggesting that most respondents feel continuing the course, especially with regard to the products dominating the sales market, will pay off. It worked last year, and if it ain’t broke don’t fix it. Unless it’s a roof. Then, by all means, get to work!

AEC BuildTech is Being Designed and Constructed for Roofing Contractors

Made in the USA: IKO Invests in U.S. Infrastructure and Long-term Growth Strategy

2015 State of the Industry Report

Derrick Teal is the content deployment manager for BNP Media with extensive experience covering the AEC industry. He can be reached at teald@bnpmedia.com.