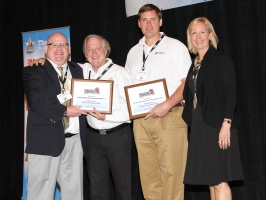 The winners were chosen by a panel consisting of the Roofing Contractor publisher, editorial staff and editorial advisory board. The goal of the award is to honor contractors that employ industry best practices, provide a good working atmosphere for employees, and excel at both quality workmanship and customer service. “Our motto for the contest is: We’re not looking for the biggest contractors out there — we’re looking for the best,” said Roofing Contractor’s editor, Chris King. “Both of these companies have a longstanding history of top-quality workmanship and integrity, and a proven ability to adapt to changing times. They also have shown a commitment to helping their communities and giving back to our great industry.”

Under the leadership of President Larry Marshall, Marshall Roofing is celebrating its 100th anniversary this year, and it’s growing despite a tough economy. Fick Bros. is a fourth-generation family business that traces its roots to 1915. Its management team includes President Patrick Fick, Chairman of the Board Joseph A. Fick Jr., Vice President Jeffrey P. Fick, and Vice President James J. Fick, and Administration Department Manager Megan E. Fick.

Both of these companies are profiled in the November issue of Roofing Contractor.