Roofing Industry Expresses Gratitude Through Donations, Giving Back in 2022

November is a time to reflect and give thanks for what you have. For many roofing companies, this gratitude is often expressed by giving back to the communities that support them, and 2022 was no different.

Roofing contractors and the companies that support them do everything from sponsoring local events to giving away roofs to deserving people. In addition to studies showing that doing good is good for you, there are some side benefits as well, as explained by Art Unlimited CEO Anna Anderson in this column published last year.

“People want to do good and when allowed to be part of something bigger, they’ll join the movement,” Anderson wrote. “Because of this, we usually see a lift in lead generation when people are able to support a company who is doing good in their community. People talk and word will spread about you investing in bringing positive change.”

So what are the ways roofing companies can give back? Here’s some examples from this year.

Some contractors participate in annual programs or charitable events. Reliant Roofing, Solar, & Hurricane Shutters in Jacksonville, Fla., launched its sixth annual Every Shingle Heart Initiative with plans to give away a roof to a local nonprofit organization.

"As a result of providing a new roof to a local nonprofit, we are able to help even more people,” said Director of Public Relations Adrienne Menzies. “It will have the best materials available on the market, installed by the area's top roofing contractor. It is important to have a good roof to protect us.”

WDAM-TV reported that Cox Roofing in Laurel, Miss., held its annual free roof giveaway. This year, they selected Sherry Stringer, a nurse for 46 years, to receive the new roof. Last year’s recipient was a Vietnam veteran.

“The community has given so much to us and we have such a good clientele base, we wanted to find a way to give back,” Tracy Cox told WDAM-TV. “We saw a lot of people who needed a roof, didn’t have insurance or a way to get one.” 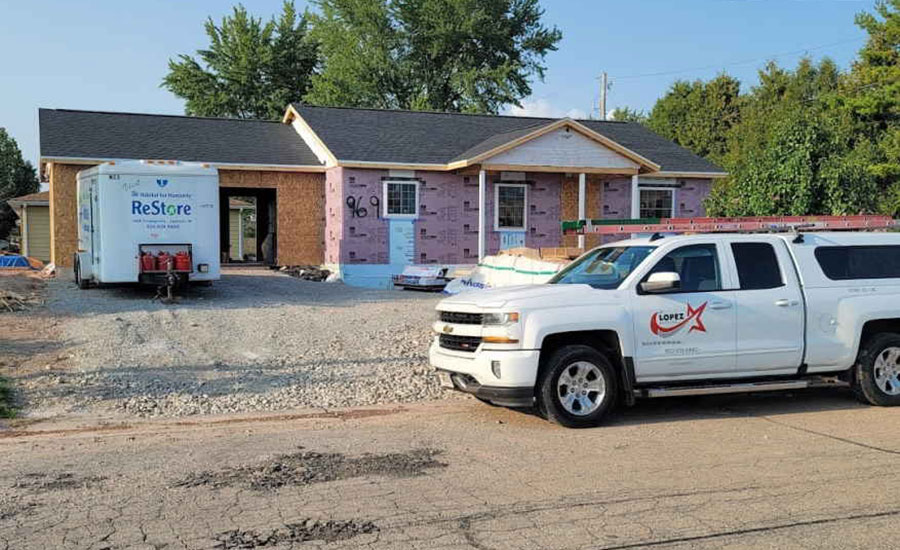 In Wisconsin, JF Lopez Roofing celebrated a milestone in giving away its 50th roof with the help of Habitat for Humanity and GAF.

"It's all about food, shelter, and clothing. So we are in the shelter business ... if you want to change the world, start in your neighborhood and this is changing families for generations,” Mark Bartolutti, co-owner of JF Lopez Roofing, told Fox-affiliated WLUK.

Other roofing contractors held fundraisers to support nonprofit organizations. Guy Roofing in Spartanburg, S.C. donated $50 for every new customer it obtained in October to the Boon Project, a program for young adults fighting cancer.

Power Home Remodeling, the 2017 Residential Contractor of the Year, raised a record $1.5 million in donations to Alex’s Lemonade Stand Foundation, a nonprofit dedicated to finding cures for various forms of childhood cancer. The company dedicates September to raising funds for the nonprofit.

“As a co-founder, I've been present for some amazing milestones throughout my career, but the work we get to do with ALSF and the real impact we have on these kids has been one of the most rewarding parts of my job,” said Adam Kaliner, co-founder of Power Home Remodeling. 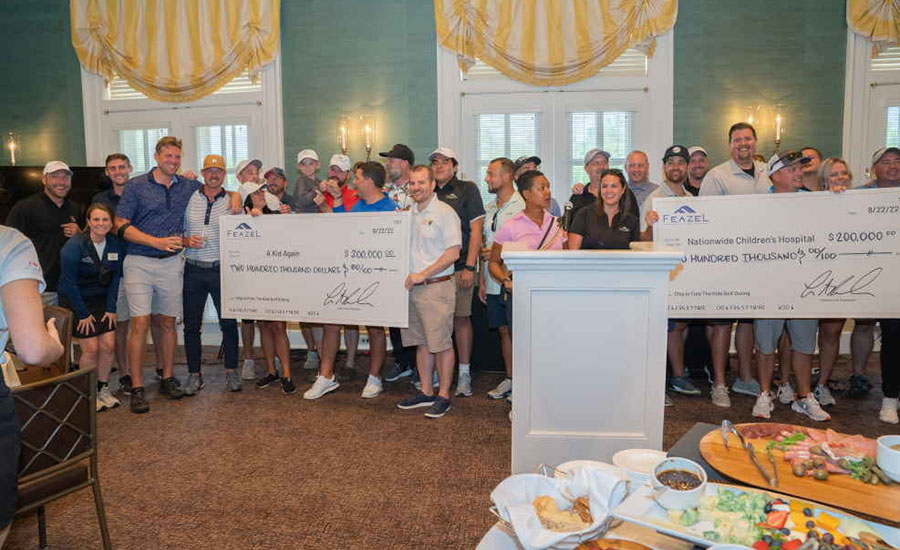 Feazel, the 2021 Residential Contractor of the Year, held its second annual Chip in Fore Kids golf tournament near Columbus, Ohio. The event raised $400,000 for children’s charities – A Kid Again and Nationwide Children’s Hospital. A Kid Again provides monthly adventures — for free — to the zoo, sporting events, and local amusement parks to their enrolled families. Nationwide Children's Hospital is a nationally-ranked pediatric care and teaching hospital located in Columbus. 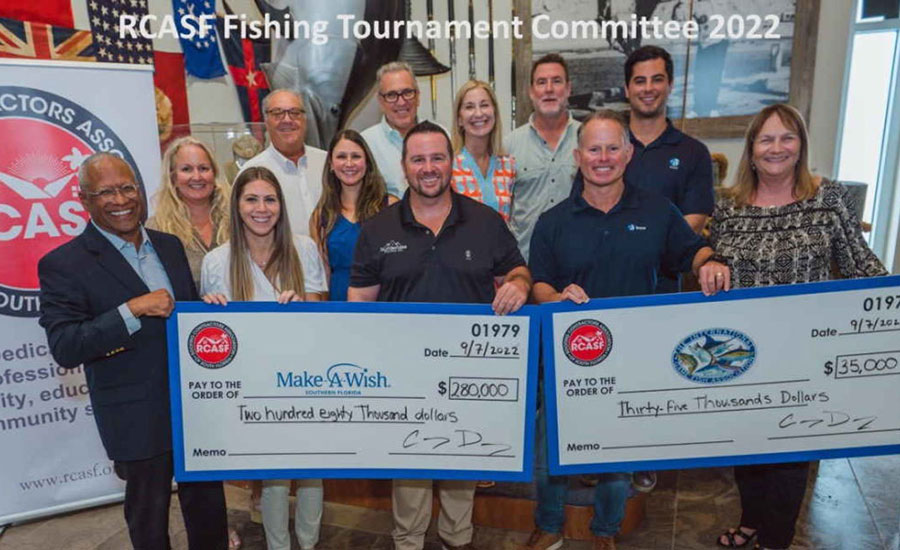 The Roofing Contractors Association of South Florida (RCASF) held its annual fishing tournament on June 11. It raised $280,000 for the Make-A-Wish Foundation and $35,000 for the International Game Fish Association's Junior Angler's Educational Program.

In Arizona, Restoration Builders used its Pay it Forward program to provide air conditioning systems to Furnishing Dignity, an Arizona-based 501(c)(3) charity that serves individuals and families in Maricopa County who are moving out of homelessness. The charity provides furnishings like beds, tables and small appliances for free to recipients.

"We take great pride in giving back to our communities, and helping this group provide much-needed A/C to families in need is a great honor. We greatly respect and admire this group and their work in our community,” said John Lorenz, chairman and CEO at Restoration Builders. 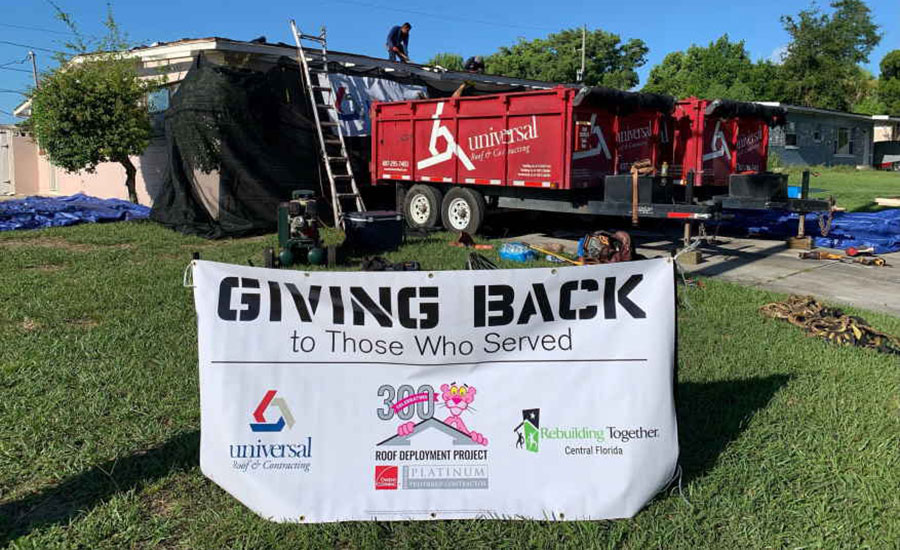 Throughout the year, roofing contractors around the country made the effort to thank those who have served our country in the military. Whether it was through the Owens Corning Roof Deployment Project or in-house giveaways, here are just a few of the contractors who donated roofs to veterans:

Manufacturers and Suppliers Give Back

Roofing contractors weren’t the only ones looking to improve the lives of others. GAF teamed up with actor Anthony Mackie, known for playing the new Captain America in the Marvel Cinematic Universe, to repair roofs damaged by natural disasters in Mackie’s hometown of New Orleans. The project has special significance to Mackie, 44, who spent his teen years working in his family's roofing business in New Orleans.

“Growing up, I spent summers working on roofs with my family, so I know how important this work is to keeping families safe and building stronger communities,” said Mackie in a release. “Everyone deserves a roof over their head, and I’m proud to be working with GAF to give back to my hometown and ensure we withstand the next storm.”

TRI-BUILT, the exclusive brand of Beacon, announced its partnership with K9s For Warriors. The program rescues dogs from animal shelters and trains them to be service dogs. Veterans then take part in a three-week, in-house training program at no cost to be paired with a service dog.

“Our TRI-BUILT roofing products are known for their reliability, and we want veterans to have the dependable and loyal support of a service dog,” said Jonathan Bennett, Beacon’s chief commercial officer.

In its continued effort to support veterans, Beacon launched its fourth annual Beacon of Hope contest to donate free roofs to deserving veterans. This year, the contest is giving nine grand prize winners new roofs. The winners will be announced on Veterans Day, Nov. 11.

"The Beacon of Hope contest supports veterans with new roofs and uplifted spirits. It is our privilege to give back to the veterans and their families who live in our communities,” said Julian Francis, CEO of Beacon Building Products.

As part of its sponsorship of Homes for Our Troops, ABC Supply Co. Inc. donated over $2 million to the organization over the summer, having pledged to match donations up to $1 million. Homes for Our Troops builds and donates specially adapted custom homes across the United States for severely injured post-9/11 veterans.

“We are blown away by the generosity of those who supported Homes for Our Troops throughout our matching donation campaign,” says Mike Jost, chief operating officer at ABC Supply.