Like most things in South Dakota, severe storms are a little different, as is the damage they leave behind. Unlike the tropical coasts and Midwest plains that are increasingly generating their fair share of roofing work in targeted seasons, the storms that rip through the Mount Rushmore State wreak havoc all year long, and no roof is safe.

What’s not so different from the other regions impacted by storms is who people rely on to fix it, or at least make the unimaginable circumstances tolerable: the roofer.

From the beginning, the fast friends realized Black Hills Exteriors needed to be built by two things; demand, and supplementing and feeding that demand by cultivating a reputation for completing high-quality projects regardless of the challenges presented along the way.

“We look at ourselves like heroes,” Enger said. “We come in after a devastating storm, into chaos. We come with crews ready to help, board up windows, tarp roofs, and have a plan. A plan to make your home secure again. While the worst experience is seeing a family’s house torn apart and almost unlivable, we provide a sense of security.” 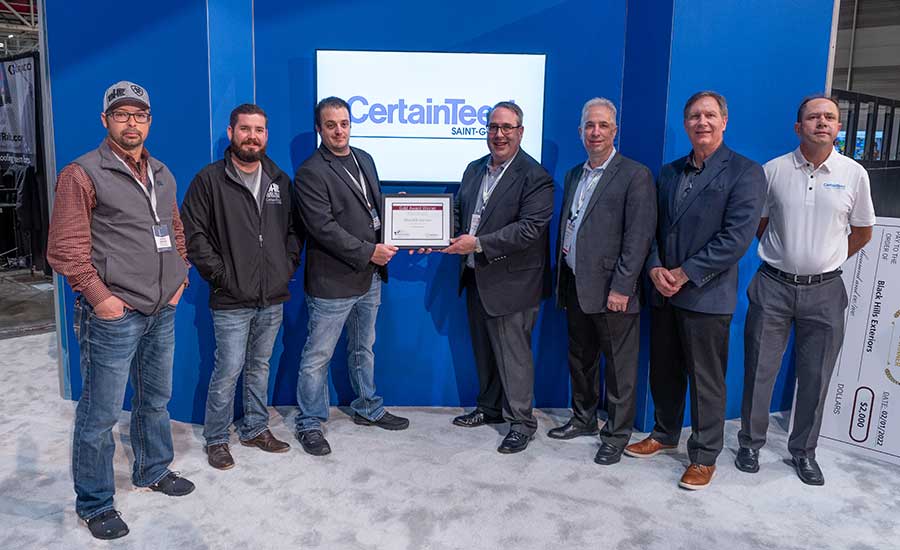 The areas surrounding Rapid City didn’t get their name by mistake. Flanked by the Badlands National Park and the Black Hills National Forest, the region’s unquestioned natural beauty comes coupled with unmistakable natural force. That was the case in October 2013, when Winter Storm Atlas pounded the northern Rocky Mountains and northern High Plains with unprecedented ferocity. The three-day blizzard delivered dozens of feet of snow and brutal winds reaching up to 60 mph. Downed power lines not only posed health and safety concerns for those seeking shelter due to the bitter cold, but they often made roads impassable.

Schmidt and Enger grabbed as many chainsaws they could find into a pickup truck and just started helping entire neighborhoods clean up their devastated yards. They both saw a business opportunity, but fearing failure, Enger clung to his project manager job with a local construction company. Yet he challenged his friend: build a company with a line-up of legitimate jobs, and he’d consider partnering up.

Five months later, while meeting for lunch at the local diner, Schmidt literally laid out just about everything Enger needed to take the plunge.

“He laid out $325,000 worth of contracts on the table and asked me if I was ready to quit my job,” Enger said. “I was shocked. He actually did it. I didn’t know what to think. I was nervous and excited at the same time. But after much consideration I put in my two weeks and the rest was history.”

Their passion, work ethic and commitment was strong, but that didn’t necessarily pay for the tools, trailer and gutter machine needed to complete the contracts on time. The 23-year-old entrepreneurs went to three different banks for a $35,000 business loan, and they all had the same response.

“All three banks said we were too young, that it was too risky, and our projections of what we were going to make weren’t realistic,” Schmidt said. “We were let down, and hard.”

When they got back to the office — the third bedroom of a house Schmidt was renting — they debated about staying in business and decided to call it all off. They started a list of clients to call, beginning with one of their bigger projects — an insurance claim for the reroof of a large house. They thought he’d take it well, that he’d have the resources to get another roofer without a problem. Instead, the response shocked them.

Disappointed the team they chose couldn’t get the loan they needed, the homeowner handed over the $30,000 check from the insurance company. He told them to get their tools, complete their current contracts, and come to him last. Enger said he made them promise not to screw him over, and to be more than disciplined with the money.

“He’s the reason we were able to do what we are doing today,” Enger said. “He believed in us and it’s because of him we learned so much about counting every dollar and making sure we run a well-oiled business. As for him, we did exactly what he said and was able to get his work done.” 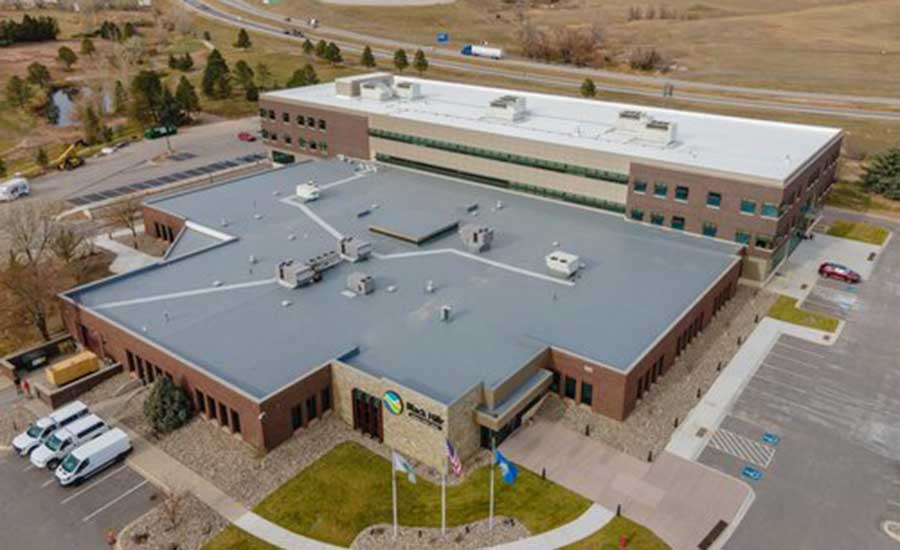 Getting that jumpstart was key to their business survival, but Enger and Schmidt remained driven, striving to elevate their craft. It starts with a highly-organized operation consisting of administrative, sales, production, commercial and new construction teams. The commercial division consists of an estimating team, project managers and site supervisors. The production team has a production manager, site-superintendents, crews and a quality control department.

The digital tools also come in handy for safety. There are 365 days of safety meetings built into their tablets. Crews are to conduct safety meetings at the beginning of every project and weekly thereafter. On the day of a safety meeting, supervisors open their tablet, choose one for the day, and check in the employees in attendance. Participants receive rewards through an internal app that connects every employee. The company applies funds into the app, and it’s become a marketplace for employees to reward each other for doing well and recognizing them for it.

“When an employee sees another employee doing good they open the app and reward them, then everyone else can like and comment on it,” Enger explained.

The rewards are real dollars they call BHE bucks. Each department has an allotment per quarter that they have to use up in the app rewarding employees. These rewards can be redeemed right through the app on Amazon, Ticketmaster, Priceline, a gift card market, and company swag.

“When we were a lot smaller it was easy for Trevor and I to praise out employees every time we saw them. As we get bigger those little things get forgotten, and culture starts to diminish,” Enger said. “We decided that we never want anyone to feel like we’re not happy about the things they do for our company, so we used this type of platform.”

Employees are also exposed to leading market software and the latest techniques in business. For example, last year, the sales team became certified in Xactimate, a leading insurance restoration estimating software used by most carriers. It has helped customers significantly on their claims, Schmidt said. 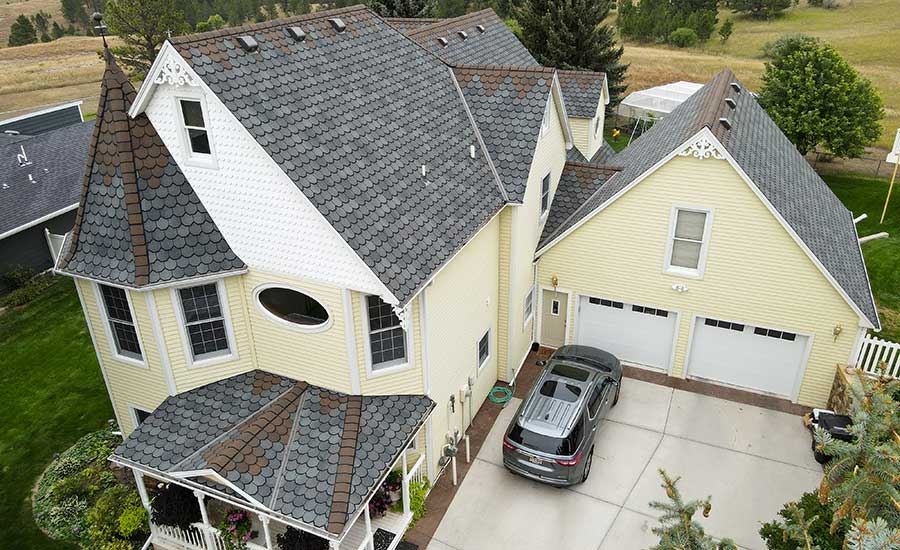 All departments work well together and don’t shy away from challenging projects. Since 2020, Black Hills Exteriors has earned two Excellence in Asphalt Awards from the Asphalt Roof Manufacturers Association (ARMA), and has been named top roofing contractor in South Dakota for four straight years on Toprateslocal.com.

The team was especially proud of earning the 2022 Gold Award from ARMA, based on voting from industry learders across the country, including RC. The project is known as the Scull residence, a 5,500 square-foot Queen Anne-style Victorian home in Rapid City, that’s recognized for its elaborate and bright color schemes, grand architectural towers, bay windows, and distinct high-pitched roofs with patterned shingles.

It was the first time a customer asked for two shingle colors to be integrated on the same roof, but the crew was able to achieve an elegant, timeless exterior worthy of recognition and praise.

“Our goal was to have all of the slopes meet up in the same position on either side of the peak. It was challenging but we took our time and laid out the slopes as we went, using chalk lines and patience,” Enger said. “Most will look at a roof like this and see the beauty at face value. When we look at this roof we see the planning, hard work, craftsmanship and patience it took to achieve our goal as a team. It challenged our best minds, but was not impossible for us and we’re proud of that.”

Black Hills Exteriors uses that pride to market in all directions year-round, not just when roofing is “in-season.” On the residential side, building relationships with communities through local youth sports sponsorships, business groups and networking organizations continue to build a pipeline of jobs. They’re also present at local rodeos and community events, where they’re promoting the trades and aren’t shy about recruitment.

“We try to involve ourselves on educating the younger generations on trade jobs and that they are needed and rewarding if you put your effort in. One of the hardest things to get is labor with any contractor right now. If we’re actively involved in trying to educate the younger generation to look at trade jobs as a good career, then we’re helping.”

To combat supply chain issues, Black Hills Exteriors stocked up on inventory, a practice many large roofers with overhead had to do to stay open. They also took the unconventional approach of meeting with each employee and providing a vision of where they see them in a year, in three years, and then in five years.

“This was important to them, as with a plan and a goal (in mind) the key players in our business held strong with us,” Schmidt said. “Because of that, we were able to come out of the pandemic with growth. The best feeling is being able to execute and reward them for believing in the vision.”

There’s also an urgent sense of transparency with key business partners to plan a path for success together. Enger said that sharing their growth strategy with suppliers allowed them to help the company along.

“We’re not in times of hiding your trade secrets anymore, we’re in times of ‘I scratch your back, you scratch mine,’” he said. “And if you’re not taking advantage of that you’re going to miss out on very large growth opportunities.”

They also listened during the process. If there’s a key to their success worth passing on to other roofing contractors, it’s listening, with intent.

“Listen to your customer’s needs, listen to your employee’s needs, and listen to your support system in business,” Enger said. “There’s so much to learn from these people. Some pay your bills, some become your family, and some help you scale to heights never imagined. All you need to do is stop and listen.”