Unlike most royalty that’s simply born into greatness, King of Texas Roofing in the Dallas area worked hard to establish itself as a top roofing contractor, starting with humble beginnings that stretch back to the Great Depression.

It’s a roofing legacy that the company’s president and CEO, Kelly Braddy Van Winkle, doesn’t take lightly. With a mission of providing innovative roofing solutions backed by highly-trained employees, paired with a desire to give back to the industry, this roofing contractor plans to wear its crown for years to come.

“Every day is different, every day is new and exciting — when I get up, I am thrilled to come to work. I’m lucky, most Americans do not enjoy going to work every day,” said Van Winkle. “Every week that goes by we have new things to solve, logistics or operational, so I think the fact that there’s never a dull moment works in our favor.” 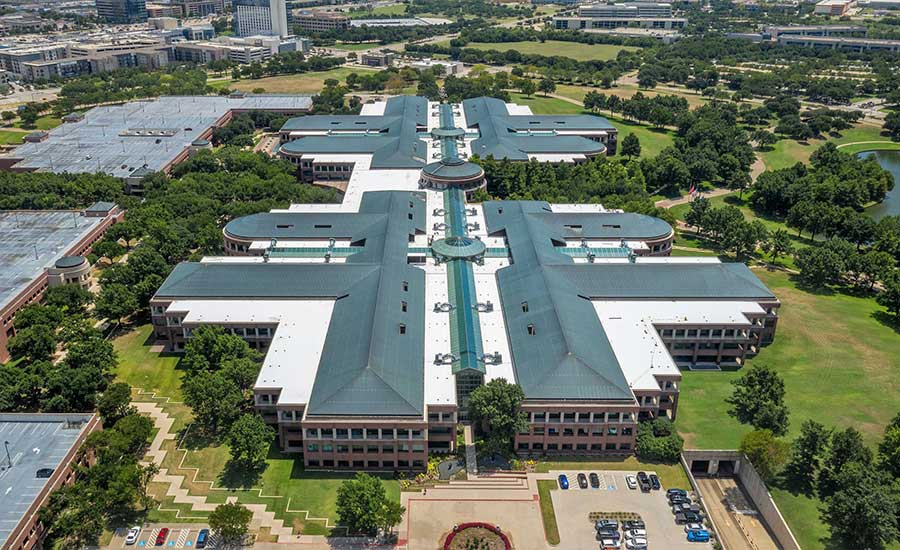 The Legacy West project involved airlifting more than 75,000 pounds of material to complete.

King of Texas Roofing isn’t simply a boastful and catchy name. It originates with Van Winkle’s grandfather, R.W. King, who entered the construction industry after graduating high school in 1931. When World War II ended, he formed King Roofing in Erie, Pa. Over the years, the company shifted from residential to commercial work.

In the 1970s, King’s son and Van Winkle’s father, Nelson Braddy, Jr., joined the company. Upon realizing the opportunities for growth in the southern market with the rise of single-ply roofing, Braddy, Jr. moved the company to Texas and founded King of Texas Roofing in 1982.

“The original plan was to only be here for a few jobs and go back to Pennsylvania, but by ’87 we were full-time in Texas,” said Van Winkle. “It’s great in Texas. You can work year-round and it’s a very business-friendly state, so we stayed.”

The company's niche specialty in commercial roofing helped it grow, assisting in new construction of commercial warehouses and distribution centers in the 1990s. Its reputation for commercial work solidified in the mid-90s after the company helped rebuild multiple towns in North Texas following a series of devastating tornadoes, restoring everything from medical office buildings to retail centers.

Initially, Van Winkle worked a different side of the industry. From 2004 to 2011, she owned an industrial tool supply and generators company, importing and selling equipment used for thermoplastic roofing. However, in a step that not only kept the business in the family, but also continued its expansion, Van Winkle joined the company in 2011.

“I was the only grandchild, the only daughter, and without me, the company would not carry on to that third generation, so I decided to put to bed my first business — which I loved — but I felt like the opportunities were greater being on the contracting side of things,” Van Winkle said. “I’ve never looked back.”

Van Winkle has been a co-owner of King of Texas Roofing since 2013, and in December 2019, became its president/CEO. In addition to her contributions, she helped expanded the company’s reach even further by helping form the Meta Team consortium in 2020.

Meta Team is a group of regional roofing companies that are all female-owned. It is a WBENC certified women’s business that provides roofing solutions for new construction, reroofing, solar, design-build and repair and maintenance in 30 states.

“What’s also grown at the same time is our work together and learning from each other, and the quality of my partners is so high that I also enjoy learning best practices,” Van Winkle said. “We’re all like-minded, so we all have similar views on safety, quality and consistency in our work.” 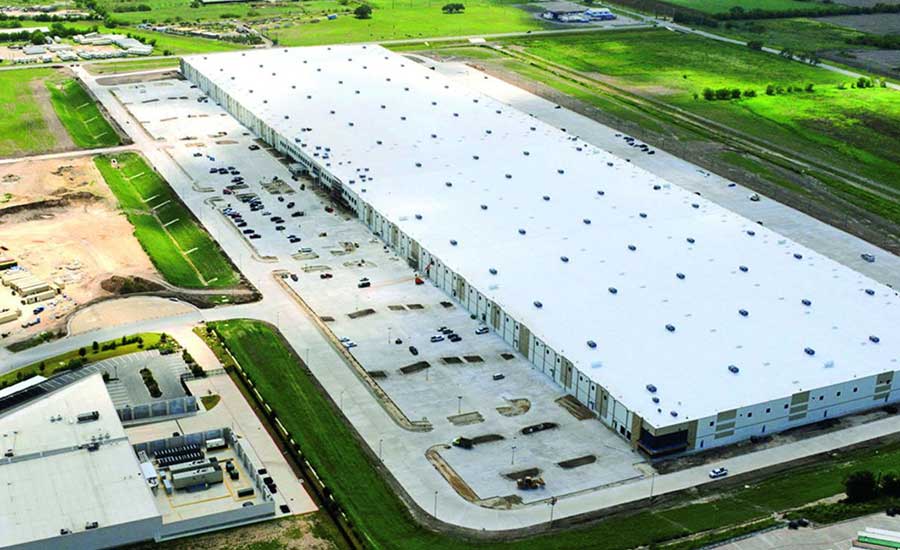 King of Texas Roofing's work on Amazon's large distribution centers have earned it a solid reputation for quality work.

New commercial construction is at the forefront for King of Texas Roofing, with only 10% of its jobs being reroofing and repairs or maintenance. It’s literally built a reputation on its building services with three departments: single ply roofing, repairs and maintenance and sheet metal — both fabrication and installation. This quality craftsmanship is bolstered by an emphasis on frequent hands-on training for workers held at its shop.

“We do a lot of educational training and we’re really into the industry training and certification,” Van Winkle said. “We really believe in giving everyone here on the staff opportunities to grow professionally and personally.

“The happiest experiences we have had as a company usually have to do with watching our employees succeed, advance, and flourish in their lives.”

As a result, King of Texas has scored some major projects over the years. Its work on several of the recent large Amazon distribution centers, as well as the Toyota Headquarters in Dallas have garnered praise for the company. Its reroofing work on the Legacy West campus, which encompassed developing a unique adhered “recover” system and air-lifting 75,000 pounds of material, demonstrates its ability to be innovative and save clients on time and money.

“The Campus at Legacy West building included 27 different roofs with no access from one roof to another,” Van Winkle said. “Therefore, where roof access was not available by sky track, materials were required to be loaded to each roof by helicopter, requiring Federal Aviation Administration approval as to flight time and zone.”

Van Winkle said its longstanding relationships with roofing companies, including Johns Manville, Sika, Carlisle and Heely-Brown have been instrumental in the company’s success. They’re especially helpful during the supply chain woes hitting the industry.

“It was something we struggled with for a while, and what we’re finding now is the manufacturers are being much more communicative, they’re informing us,” Van Winkle said. “If they’re promising something within a given week, it’s actually starting to be that. The important thing is we learned to communicate with our customers.”

Outside of its day-to-day work, the company as a whole is all about advancing the roofing industry through its involvement in associations and organizations. Both Van Winkle and her father held multiple positions with the NRCA over the years — including Braddy, Jr. as its president from 2013-14. The company is also active with the NRCA’s political action committee, ROOFPAC, and the Roofing Alliance.

Van Winkle said the Roofing Alliance, the nonprofit foundation of the NRCA, provides great opportunities for networking and collaboration for the betterment of the industry. As of this year, Van Winkle became the foundation’s president after serving as vice president. She is the first female to hold both positions.

“The last 25 years has been fantastic, they’ve done so much good for the industry, and this is quite a transitional year as well, besides the fact that I’m the first female president,” she said. “My goals for the Alliance include continuing to promote the vast array of meaningful philanthropic and educational programs already in place, as well as incorporating fresh, new ideas that our growing membership is bringing forward.”

Van Winkle said this passion for helping push roofing to new levels all comes back to being grateful to the industry that has provided so much for her family and employees.

“I think that’s important to do, to not just focus on your business but focus on the industry as a whole,” she said.