Name That Shingle (NTS) might sound like a roofing-themed game show, but in reality, it’s a service that’s shaking up the industry and taking the guesswork – and legwork – out of properly identifying shingles.

Like many services or products offered to the roofing industry, Name That Shingle emerged when a roofing professional needed to solve a problem. In this case, it was John Senac, a roofing consultant who began his career in sales. In 2016, he sold a roof that had a discontinued product on it and had to be fully replaced. The incident opened his eyes to the fact that this was likely happening everywhere.

“I started collecting information and collecting data in the event that I had to answer that question for a homeowner or an insurance carrier or a Realtor, or anybody involved in that process,” he said.

This passion for hunting down information served as the grounding for NTS, a third-party, objective service that not only analyzes and identifies shingles, but provides as much information about them as possible.

In the material identification market, ITEL Laboratories has been the main provider of identifying products, leading most insurance carriers and contractors to depend on it. Senac said it’s a fine service, but contractors have noted it lacks backing documentation. He and NTS CEO and co-founder T.J. Ware saw an opportunity for a different style of reporting.

Senac spent four years gathering information on shingles from various manufacturers. He and Ware released NTS in November 2021 after months of beta testing.

To identify a shingle, a sample of the product in question is sent to NTS’ lab and storage facility near Dallas where it runs a series of specifications and analyses. Once finished, the report shows whether the product is available or discontinued and if it’s part of a repairable roofing system. Color identification is available as well. 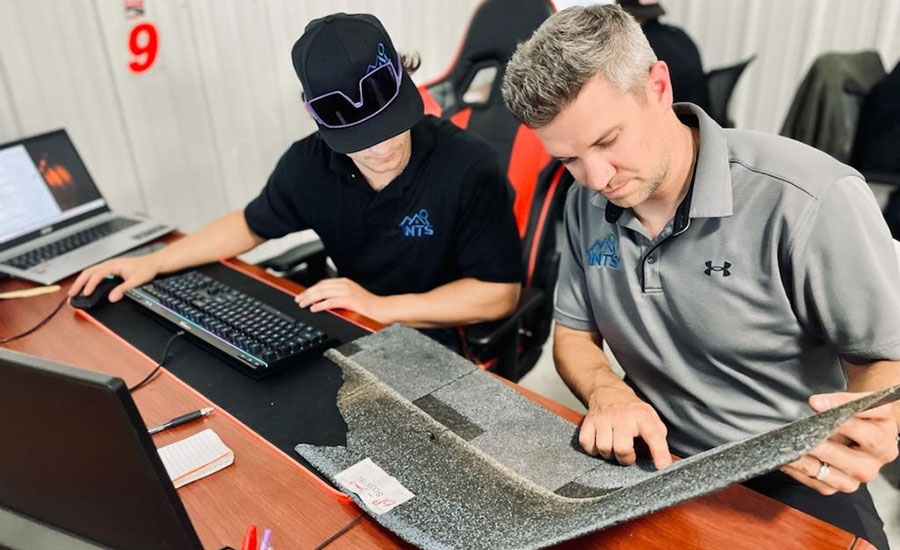 NTS’ reporting is focused on the available information from manufacturers. Senac said in the past, roofing contractors would receive a report and then have to track down documents from distributors, manufacturers and sales reps about the shingle. NTS does that legwork, using a robust database that is consistently updated to provide documents in its reports.

“If there’s letter that says, ‘Hey, we stopped making this in 2008,’ that’s in the report,” Senac said. “If it applies to that particular product, it’s included in the report.”

These documents are invaluable for telling contractors whether a product is compatible with today’s shingles, saving them time and effort and avoiding improper installations. Senac said the reports are helpful for homeowners as well, as they can know everything about the shingles on their roofs.

“The homeowner deserves to have some trust behind the information they’re receiving, and if it’s a roofer saying, ‘We can’t repair your roof, here’s why,’ our reporting has that information there from the manufacturer and they don’t have to go off just the word of the roofer,” he said. “The report becomes the unbiased piece that supports their expertise.”

Initial reactions to NTS, especially from insurance carriers, expressed hesitancy given the newness of the service. However, since that time, both homeowners and contractors have reacted positively. Evidence of this hunger for proper identification is seen in NTS’ Facebook group. Just over a year ago, the group began with around 1,000 members. It is now more than 11,000 members and has expanded to include other products.

“It’s become this living community of people that help each other out,” Senac said.

NTS is looking into developing an app to speed up the reporting timeframe, and hopes to upgrade the process so that it doesn’t require physically removing a sample. There are even plans to expand its identification services to other products like tile or siding.

“Obviously there’s more on the exterior of the home than asphalt shingles,” Senac said. “We’re in the process of testing some other surfaces.”

The service comes in a time where repair scopes have been increasing significantly since 2020 due to the pandemic. Now that supply shortages and inflation are pinching everyone’s wallets, NTS’ reporting means contractors and homeowners can find out what types of guarantees or warranties can be offered and provide transparency on whether a shingle is “temporarily unavailable” or “permanently discontinued.”

Senac said NTS also has the side effect of elevating the industry as whole, as contractors can show they’re willing to do due diligence on behalf of their customers and allow them to make an informed decision about their roof.

ARMA Report Shows Shingle Shipments Up from 2019, Down in Fourth Quarter