Inspecting large commercial flat roofs can be time consuming, expensive, and dangerous. Using drones to facilitate rapid inspections of these properties can make roof inspections faster, safer, and less expensive. In fact, the benefits of drone inspections have become so obvious that adoption of this technology has skyrocketed during the last five years. However, equipping these drones with additional technologies beyond regular visible cameras, such as thermal imaging cameras that allow the operator to see infrared energy invisible to the naked eye, brings additional benefits that make this type of inspection invaluable.


Thermal Roof Inspections: The Old and the New

Thermal, or infrared, imaging uses specialized cameras to make still images and video of the differing amounts of thermal energy being emitted or reflected from a surface.

While this generally corresponds to an object’s relative temperature, meaning that things that appear to be giving off more thermal energy are hotter than the things around it, that’s not always the case. Differing materials and surface finishes can impact an object’s ability to give off its heat energy, otherwise known as emissivity. This natural phenomenon can cause a surface to be more reflective, causing it to look much hotter or colder than it really is. Understanding properties such as emissivity is vital to effective inspection and can be learned as part of a beginner thermography training course, which will enable operators to get the most out of a thermal camera equipped airframe investment. 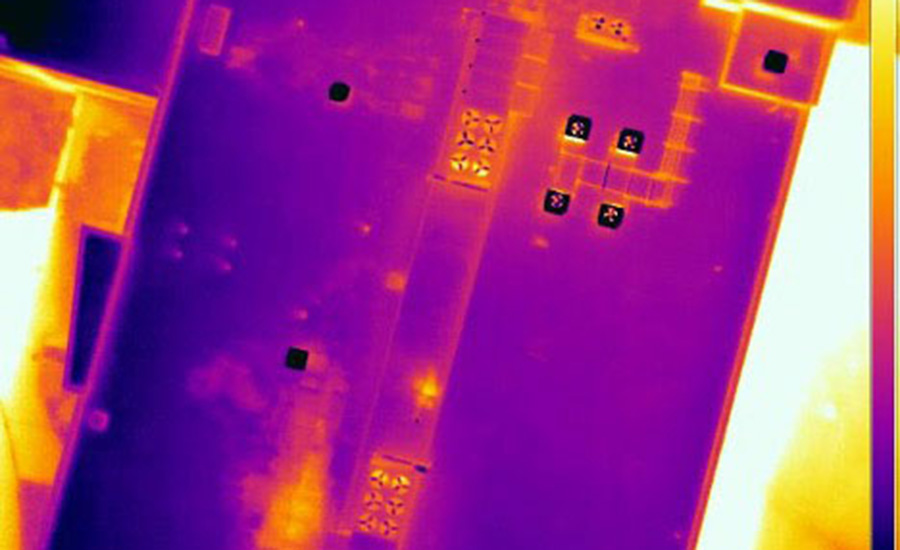 FIGURE 2:  Thermal cameras can provide temperature of a surface and show insulation and moisture issues during roof inspection from a drone.

An Efficient Formfactor for Roof Inspection

Using handheld thermal cameras to inspect membrane covered roofs for potential moisture damage is nothing new to seasoned industry pros, and often those same standards and practices still apply when using a drone to carry the camera instead of walking the roof.

ASTM standard C1153 lays out the guidelines for cameras, environmental conditions, and moisture verification when doing thermal inspections of membrane roofs, and it applies to drone inspections as well as manual inspections. In a nutshell, the basic requirements are as follows:

These preconditions are designed to give operators the best chance of finding the very subtle heat differences that can indicate moisture trapped under the roof membrane. During the day, the roof surface is exposed to sunlight, and absorbs the energy of that solar radiation. After the sun goes down, the areas of the roof with dry insulation will radiate that stored heat off more rapidly than the wet areas. Because water has a high thermal capacity, it will take longer to shift temperature and will therefore present a different thermal signature than the dry areas.

It is important to note, however, that while these thermal anomalies may be indicative of possible moisture intrusion, they are not diagnostic. Someone will still need to get on the roof to verify whether there is moisture under the membrane. The advantage drones provide is to cover large roofs in a matter of minutes, capturing a series of overlapping images that can then be stitched together into a large thermal image mosaic of the entire roof through readily available software. This allows the facility manager or roofing contractor to localize the few points that need to be manually inspected, greatly reducing the amount of time they need to spend with boots on the roof while reducing the chances for injury. 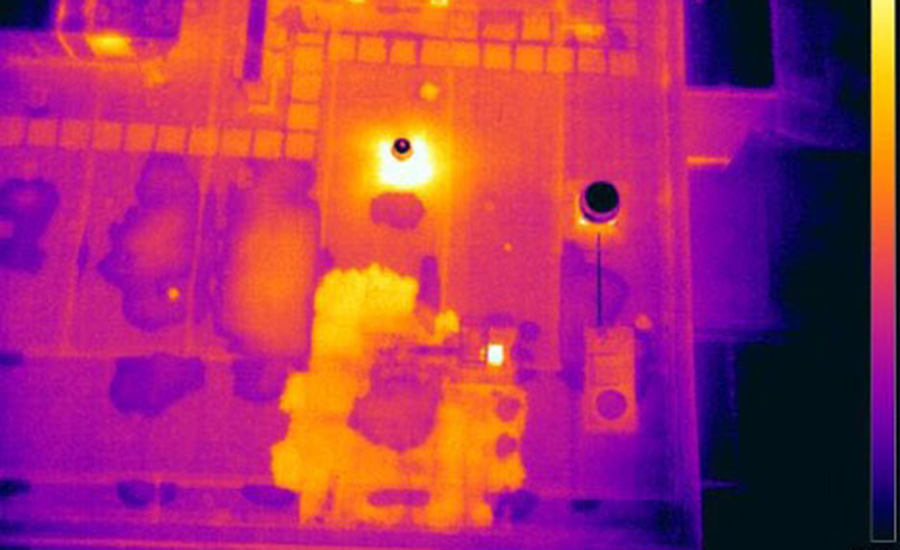 One of the limitations of previous drone thermal camera technology is an inability to effectively zoom and review potential issues more closely. Until recently, the only way to get a closer look at an anomaly – other than flying closer to the roof – has been to use the camera’s electronic zoom, which digitally enlarges the pixels creating a fuzzy, lower resolution image with poorer detail.

That’s why a dual thermal camera payload for drones that includes a wide field of view (FOV) thermal camera paired with another narrower FOV thermal camera was introduced. With two cameras instead of one, operators can utilize five-times optical zoom without affecting resolution and image quality. This feature greatly improves the efficiency of thermal drone inspection, opening more possibilities to inspect larger roofs faster and reducing flight time.

Furthermore, large commercial and industrial roofs also include more than, well, a roof. At the very least, there will be mechanical systems like generators, HVAC systems including air handlers and duct work, access points, solar panels, and numerous of other things that can all be inspected with thermal imagers. The ability to measure the temperature of objects in the scene will allow operators to identify potential issues as well as reduce false positives.

Incorporating dual thermal camera drone payload systems when inspecting the above features gives operators the best of both worlds – a quick scan of large roof areas in the wide FOV, then the option to zoom in on any potential anomalies without sacrificing resolution, image detail, or temperature measurement spot size.

During a flat-roof inspection, operators may want to examine much more than just moisture intrusion, such as thermal anomalies related to the HVAC systems or solar panel efficiency. When flying past one of the HVAC installations, a pilot may notice a diffused heating pattern extending out from where duct work connects to the air handler in a fan pattern. At this stage, an operator could zoom in and confirm a heat distribution pattern that is classically indicative of convective heat transfer. This can then be included in an inspection report as a suspected leak of conditioned air into the duct system, where a crew could then correct the fault, as necessary.

In conclusion, drones give roofing professionals the power to inspect large areas of roofs quickly and safely, without having to spend hours on hot and potentially dangerous surfaces to do their initial inspections. The latest advances in thermal imaging, including dual thermal camera payloads, brings even more advantages to these drone inspections – from rapid moisture inspections to detailed examinations of roof mounted mechanical systems. 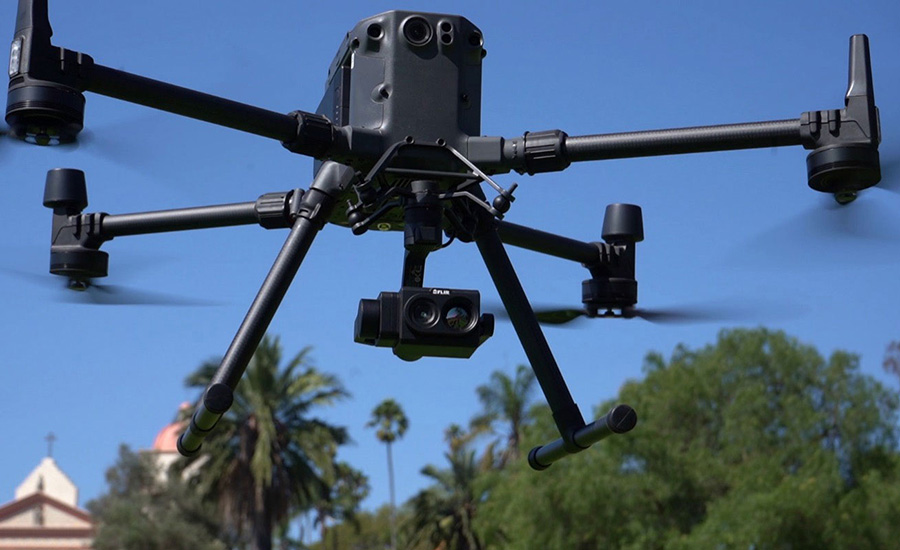 Kelly Brodbeck is a product management executive with experience in multiple technical industries including thermal imaging, photonics, energy development and operations, and medical device. The cumulative value of all products he and his teams have introduced exceeds one billion dollars. He is currently charged with advancing Teledyne FLIRs commercial UAS product offerings to serve a broader portion of the market with new payloads, airframes, and software.