This website requires certain cookies to work and uses other cookies to help you have the best experience. By visiting this website, certain cookies have already been set, which you may delete and block. By closing this message or continuing to use our site, you agree to the use of cookies. Visit our updated privacy and cookie policy to learn more.
Home » 2021 Residential Contractor of the Year: Feazel Inc.
Steep Slope RoofingRoofing Contractor of the YearRoofing Technology

As he accepted the 2021 Residential Contractor of the Year Award on behalf of Feazel Inc. during the annual Best of Success conference in September, President Leo Ruberto lamented that everyone at Feazel couldn’t be present, saying "they deserve to be here more than I do."

Those who know Ruberto aren’t surprised by this sentiment. The U.S. Marine turned roofing contractor believes in investing in his people, and in doing so, the rest falls into place.

“People might feel that is an obvious one, but I truly think that is the reason I have grown Feazel and won this award,” Ruberto said. “Focus on bringing good people into your company and investing in training or resources so they can do their job most effectively and efficiently has helped Feazel achieve its current state of success.”

That success includes more than Contractor of the Year. Feazel has been a consistent Top 100 contractor since 2015, taking the 11th spot on this year’s list after earning $120 million in revenue last year. The company also earned a spot on Inc. Magazine’s 2021 Inc. 5000 list — making it one of the 5,000 fastest-growing companies in the U.S. — as well as being named one of Central Ohio’s Fast 50 companies.

Feazel has also been named one of the Best Places to Work, and recently received the Corporate Citizenship Award, given to companies that give back to the Central Ohio community.

This success hasn’t been without challenges along the way, most notably the difficulties caused by the global pandemic and supply shortage. But with the right people and plans in place, Feazel has weathered the storm to deserve its recognition.

“Being recognized as Contractor of the Year means so much to me and the team, especially coming off what I would consider the most challenging 18 months of my professional career,” Ruberto said. “This is truly a testament to the team we have established at Feazel. They are some of the most hardworking and passionate people. I am humbled to work alongside this team.”

A Reputation to Uphold

Feazel Roofing formed in 1988, co-founded by brothers Mike and Todd Feazel in Westerville, Ohio. The roofing contractor gained a reputation for being a solid company by the time Ruberto entered the world of roofing in the early 2000s, having been honorably discharged from the Marine Corps. He joined the industry in a selling position and viewed the job as just that, not knowing it would develop into a lifelong career.

Following a hail storm, Ruberto went to Columbus, Ohio in 2003 where he met Mike Feazel. Nearly a decade later, Ruberto wanted to take the next step in both his professional and personal life, seeking stability to raise a family while furthering his roofing career. In 2012, he pitched the idea to purchase Feazel Roofing, and in January 2013, the Feazel brothers sold the company to him. 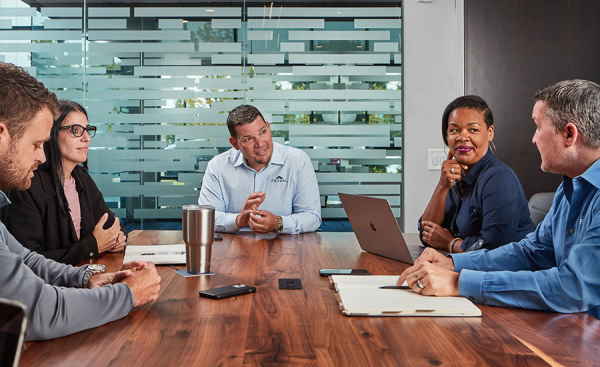 “This is truly a testament to the team we have established at Feazel," Ruberto said about earning Residential Contractor of the Year. "They are some of the most hardworking and passionate people. I am humbled to work alongside this team.”

To further emphasize its first core value, Ruberto decided to drop “Roofing” from the business name to emphasize the company’s wide range of services, including windows, siding and masonry. In 2017, it sold its materials distribution company, Capstone Supply, to ABC Supply Co. Inc.

The company grew its market as well, expanding to Cincinnati, Cleveland and Dayton, and further establishing itself in Indianapolis, Ind. and Raleigh, N.C. This led to establishing standardized documentation and processes for all its offices to follow.

“We have learned that growth is not just about acquisitions, it is about building foundations to not only support growth but to allow for growth across the board,” said Rhea Cunningham, Feazel CFO. “We are learning how to continuously improve by building a foundation that supports operating our current business while staying true to our mission, but allows for strategic planning at the same time.”

Feazel’s growth also came with acquisitions. Cunningham said Feazel’s approach to looking for companies to acquire starts with whether they work with Feazel’s business model, followed by looking at companies within particular markets and industries.

“With our acquisitions, we have inherited some incredible people, brands, and are so lucky to partner with Mike Kearns (Kearns Brothers) and Shannon Allcock (Shanco) to help us through these transitions,” Cunningham said. “With every company we acquire and every person we meet, we are gaining more knowledge, and sharing those best practices helps each market grow.”

The company has come a long way, but so have the customers it serves, said Ruberto.

“There is no such thing as the yellow pages anymore. Our customers have evolved and our marketing strategies have needed to evolve as well," Ruberto said.

With all this growth and the need to evolve alongside its customers, Feazel embraced using technology to keep its eight offices in several different markets running smoothly. Even before the pandemic, Feazel knew the importance of leveling up its digital game.

“Our customers are used to ordering groceries on an app, tracking their packages in real-time, and having information at their fingertips,” said Katie Ruberto, COO. “The technology we have implemented has helped us meet our customers where they are and allow our employees to do their job more efficiently.”

That effort to meet customer needs and expectations led to the release of Robyn, a virtual guide built to eliminate the need to schedule in-person appointments for roof replacement quotes. Launched in 2018, Robyn allows customers to request a quote online, prompting a drone operator to visit their property and take high-resolution images of the roof. The operator leaves behind virtual reality goggles designed to be used with any smartphone.

Robyn is able to estimate the materials and costs needed for the roof replacement, and the customer receives an email with the quote and a virtual reality tour of the roof replacement process. Customers can even use a custom roof visualizer to view a 3D model of their home and view it with various shingle styles and colors.

“Technology not only helps us to meet the needs of our customers but is critical for our employees and the support of business operations,” said Katie.

This technology proved to be invaluable in the past 18 months when COVID-19 prompted lockdowns and social distancing. At the time, Feazel’s hands-off approach to roofing was uncommon, but the investments now seem like a no-brainer in a post-pandemic world. In addition to Robyn, Feazel limited its in-person operations at its offices and invested in technologies that focused on working remotely, like cloud project management and e-accounting.

“We worked to provide a ‘touch-free’ experience and marketed this throughout the pandemic and it was important that we could deliver on that for the safety of our customers and employees,” Katie said. “Our existing technology allowed for those ‘touch-free’ customer interactions and we hope to continue to develop on the amazing learnings we have had to date.”

The ability to communicate regardless of the work situation has proven to be a boon for the company as the industry suffers a supply shortage. Ruberto said constant communication and transparency with its distribution and manufacturing partners is key for working through supply issues.

“We send reports every week to our partners on what we have sold and our backlog per location; this allows for both the Feazel team and our partners to know the issues as soon as possible, with the hope of addressing them at an earlier date,” said Ruberto. “We have also consolidated our color lines with our materials. This helps us streamline our processes and allow us to focus on supply solutions for a handful of products instead of spreading our efforts among a wide variety of materials.”

Feazel and its People

Of course, technology and best-laid plans aren't effective without having competent workers. Feazel provides employees with extensive customer service training based on the Sandler sales approach, including an immersive onboarding process with sales staff. Cunningham said they learn how to interact with customers and participate in classroom and field training with sales managers for several weeks.

“We offer Feazel orientations and training to the roles and responsibilities of our new teammates. Employees receive on-the-job training with a manager in their initial weeks with Feazel,” Cunningham said. “We provide ongoing training on product knowledge, technology updates, and safety as well as continuing education opportunities for all employees unique to their positions.” 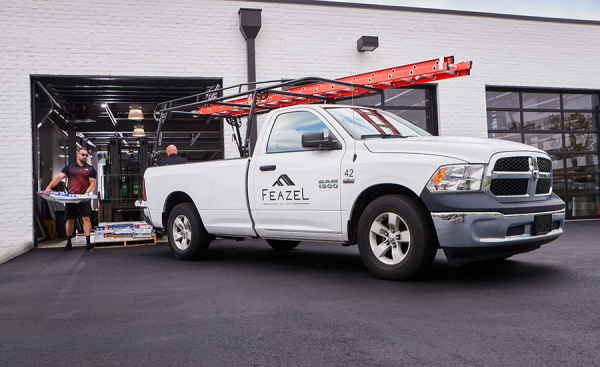 Feazel relies on constant communication and transparency to endure the current supply shortage.

In regards to safety, the company has all project and production managers certified with OSHA. Monthly safety meetings are held to keep the topic top of mind. Like the rest of the company, it’s always evolving — it was in the midst of revamping its safety program as of mid-October.

“I think it is important for all businesses to give back, not just roofing companies,” said Sarah Kessler, communications manager. “We are a part of the communities we serve. Our customers who live in these communities have become our friends and we have created lifelong relationships inside our communities.”

Notable projects include donating a new roof and gutter system to the Cincinnati Earl Learning Center’s location in Harrison, Ohio in 2014.

Not even the pandemic slowed down the company’s efforts. This year, Feazel hosted its first golf outing for a local organization named “A Kid Again.” Feazel, along with many of its partners, donated $200,000 to the organization, which provides fun-filled adventures to children with life-threatening illnesses.

“It can often be easy to pull back from giving opportunities when companies are struggling; however, we saw our communities suffering and we found different ways to help and give back,” said Kessler.

With this combination of safety, good people and technology, Feazel sets itself apart from the competition. As if it needed to differentiate itself further, it offers a lifetime warranty for its roofs, something Ruberto said was inspired by the ever-evolving reputation Feazel has built since 1988.

“I never wanted a Feazel customer to call in and for us to say ‘No, we can’t help you,’” said Ruberto. “Customer service has always been at the forefront of our business — our goal is to create meaningful, long-lasting relationships with our customers.”

Roofing Contractor Announces the 2019 Residential, Commercial Contractors of the Year