In April 2020, roofing contractors, like the rest of the country, attempted to navigate the COVID-19 pandemic after it practically froze the nation in place.

The roofing industry got back to work as state governments recognized roofing as essential, though inconsistencies between each state led to many contractors struggling. At the time, RC and Clear Seas Research — the survey and research arm of RC’s parent company, BNP Media — asked professionals how they were persevering. The survey showed that industry professionals were embracing trends that are now the norm today: virtual communications, new marketing techniques, employees working from home, and delaying projects.

Meanwhile, the federal government passed sweeping legislation to help businesses and homeowners alike. Items like the Coronavirus Aid, Relief and Economic Security Act had broad implications for roofing contractors, including Paycheck Protection Program loans and homeowners receiving stimulus checks they could use on home improvements.

As the nation slowly emerges a year later thanks to improved knowledge about the virus, the rollout of COVID vaccines and the passing of the $1.9 trillion American Rescue Plan in March, RC caught up with roofing contractors from around the country to see what they learned and how they believe roofing has changed. 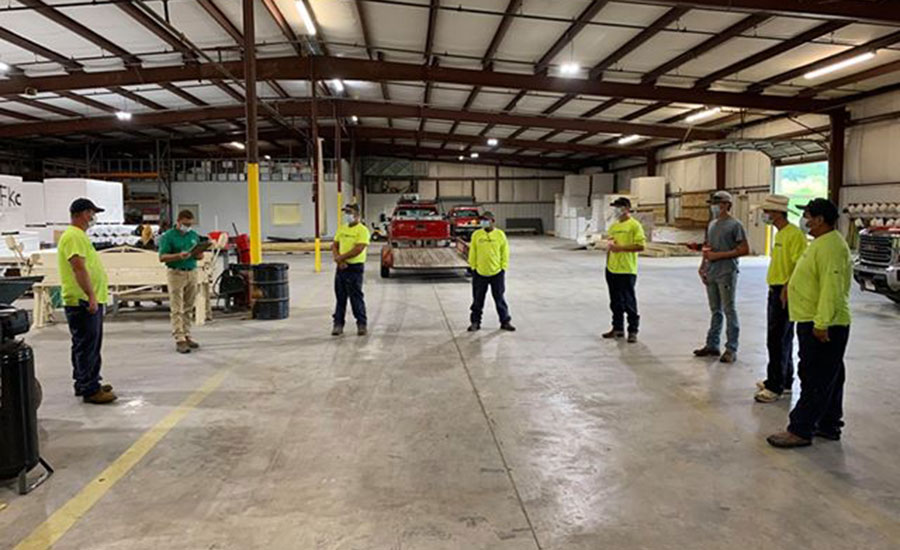 An Impact on Safety and Jobs

Without question, the pandemic transformed safety in the industry. Masks are now a part of a crew’s mandated PPE, daily checks for symptoms are commonplace, and contractors are tracking and sending home employees who test positive for COVID to prevent the spread.

The pandemic caused many to temporarily shut down their offices, including Legacy Roofing in Ohio, leaving them open for essential personnel only. Using a rotation program, Legacy gradually brought workers back, and in addition to wearing masks and social distancing, workers had to wash their hands four times a day, have daily temperature checks and disinfect equipment twice a day.

“Moving forward we obviously will continue to observe all health and safety protocols, and we will continue to minimize the number of staff in our offices through work-from-home and staff rotation arrangements,” Kruse said.

Rod Petrick, president of Ridgeworth Roofing in Frankfort, Ill., and chairman of the National Roofing Contractors Association, said his company took similar precautions to prevent workers from getting sick, and a year later, the commercial roofing company has remained COVID free.

“When it first came out, we actually took a one-week shutdown just to get prepared, talk to our safety consultant and come up with some COVID toolbox stuff so that we could train our guys on what we needed to do,” Petrick said. “You’ve got to remember, what we were doing last March was a lot different than what we’re doing today. Back then, the whole world stopped working for a while, but roofing ended up being essential.”

Even with roofing’s essential status in place, contractors have contended with supply shortages that are only now beginning to let up. Despite job delays caused by supply chain issues, contractors are reporting above-average business from the past year, such as White Castle Roofing in Nebraska.

“Our market, or our usual rate of business, I would say went up pretty significantly this last year, and hopefully it’ll do that again this year,” said Jake Hansen, COO of White Castle Roofing. “I would buy into the idea that more people were home, they were doing housing projects and things, at least in Nebraska, and that has definitely helped.”

Lindsey said Infinity Roofing also had a stellar latter half of the year that made up for the otherwise poor sales it had a year ago.

“Quarter three and four were record breaking for us, and we ended up having one of our best years ever,” he said. “I kind of feel bad about that a little bit, but people needed our help, so we were there to service them.”

Those in the commercial sector are also reporting increased business. Legacy Roofing grew more than 20% over 2019, and Commercial Roofing & Waterproofing in Waipahu, Hawaii, saw business pick up in the past year. Guy Akasaki, president and CEO, attributed great marketing and his staff to the company’s success.

“We had done exceptionally well considering the construction shut downs, customer hesitations, project movements that were very staccato for some time,” said Akasaki. “However, the preparation we had put into place from four to five years ago, with the anticipation of knowing that something unforeseen that could impact our organization — was to segment our market approach.”

“I think you’re going to see people taking on new parts of the industry, new systems that are coming out, new business models,” said John Kenney, COO of Cotney Attorneys & Consultants. “It’s not only optimistic, but it’s in the realm (of possibility).”

Lead generation company Modernize surveyed 1,270 homeowners about how they plan to spend their stimulus checks from the American Rescue Plan, and more than half expect to use the money on a home project. Of them, 82.8% of those with roofing projects plan on using stimulus funds to help cover the costs.

“Roof replacements are one of the most important projects homeowners undertake,” said Gregg Hicks, vice president for Modernize. “Stimulus checks can help make the difference in enabling homeowners to complete critical work.” 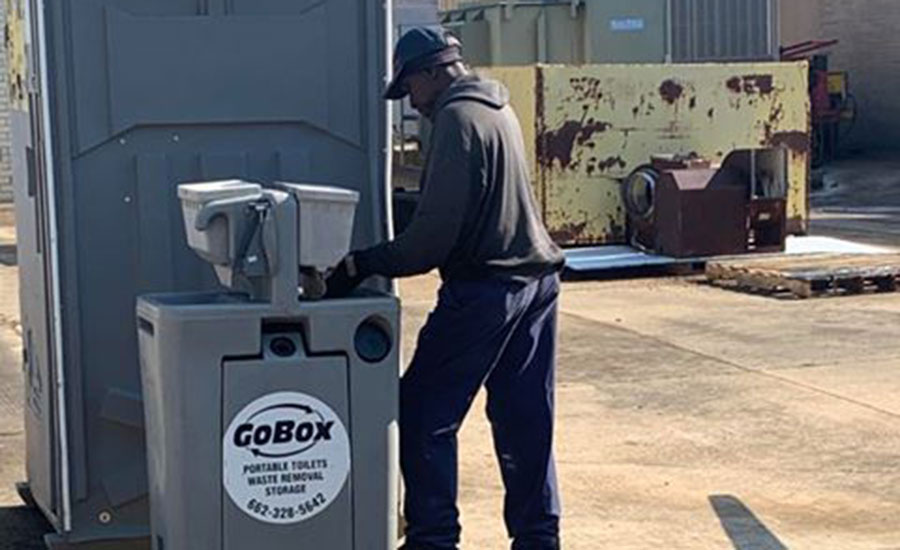 Technology continues to remain one of the industry’s best allies through the pandemic. More and more contractors are adopting video chat services like Zoom and continue to use them to this day, especially when customers express concerns over in-person interactions. Other programs like Docusign that allow for contactless interactions are now the mainstay, and will likely remain so.

Hansen, whose brother, Luke, developed the CompanyCam app, said the industry’s mass adoption of technology is probably one of the few silver linings to come out of the pandemic.

“I would think, and maybe this is just my bias, that roofing companies in general and construction companies are a little behind on the times in technology-related aspects,” he said. “We’ve been really hit with the idea that you definitely can do a whole lot of these things remotely, you don’t have to meet homeowners face to face — it’s good to, no harm in it — but there’s a whole lot of remote opportunities we’ve been able to utilize.”

Eustis Roofing in Lake County, Fla. took the available technology and ran with it, going so far as to having homeowners safely take photos of their roof with the support of HOVER prior to them showing up. Once on site, they used FaceTime while on the roof to communicate with their Florida customers.

“This is where people come to retire, so it’s very important that we keep that in mind in their safety,” said Jason Reisman, general manager. “They’re the ones that are elderly and can catch the virus and suffer more from it than the younger generations.”

Training and marketing has become more difficult to do in person, but as always, contractors are adapting. Graham Roofing Incorporated in West Point, Miss., took advantage of its large warehouse to spread out workers, both for training sessions and a holiday party to raise morale.

“It was modified, but it was good and nobody got sick,” said Christee Holbrook, president. “We were lucky that we were able to go on. We had to modify how people did things — we didn’t put as many people in trucks, and extra cleaning — but it’s stuff that I don’t think we’ll ever do anything different now.”

RKG Roofing & Construction in Texas has been tech savvy for a while, and when the pandemic hit, the company utilized video training modules and a Facebook group to post additional content for its sales staff.

“I’ve also put a lot more into diversifying our online presence and our online marketing to be able to reach customers in a different way,” said Kimba Garcia, co-owner. “Prior to the pandemic I did a lot of networking events and we really got out there … so we’ve had to become a little more adaptive on how we reach people.”

Now that a vaccine is being rolled out, there may be a light at the end of this long tunnel. In January, a coalition of 12 roofing associations encouraged individuals to get the vaccine to help end the pandemic, but many roofing contractors are taking a cautious approach to vaccinating their workers.

“Honestly, (vaccination) is a personal decision, that each one of us as Americans have the freedom to choose and decide,” said Akasaki. “We advocate individuals to do their own research as there are other successful therapies that are currently available and have been available for a quite a while.”

Kenney said that voluntary programs will likely be the norm, but warned roofing contractors may run into customers who require workers to be vaccinated, such as at senior living centers, hospitals and even homeowners.

“You’re going to have homeowners who are going to want to see that vaccination before you come onto that job,” Kenney said during a live panel discussion at the International Roofing Expo’s Virtual Edition. “It’s going to be an issue, and probably put a bigger strain on our workforce than we’ve already been facing.”

In the same IRE presentation, Ken Kelly, president of Kelly Roofing in Florida, said he supports offering the vaccine to employees and intended on getting it if it means he can travel safely again. Michelle Boykin, COO of Rackley Roofing Co. in Nashville, Tenn., had a similar take, but was hesitant about a vaccine program for her workers due to being in a more conservative state.

“We’re treading that very, very lightly, and if we were going to do something, it would be voluntary, it would not be mandatory,” Boykin said.

Petrick said he is among the many who are looking forward to life getting back to how it was before the pandemic, and believes the vaccine is an important part of it.

“I don’t know if it’ll ever be 100% normal, but I think we’re going to get back to more as we knew it, once people get their vaccines and we get to that herd immunity,” Petrick said.