Police Apologize After Accusing Massachusetts Roofing Contractor of Being a Scammer

MANSFIELD, Mass. — Chris Fitzsimons, owner of Easton Roofing, has worked for more than two decades to build a solid reputation as a roofing contractor in Massachusetts. But with one misinformed Facebook post from the Mansfield Police Department, that reputation, and his business, has suffered.

“You work hard, you work 10-12 hour days, you get your business going and you’re supporting your family, and in a few clicks someone can destroy a whole reputation,” Fitzsimons said. “That just kills you.”

The trouble began on Tuesday when Fitzsimons received a text message from a friend urging him to check Facebook. What he saw was a post from the Mansfield Police Department that began with the phrase “Can anyone recommend a terrible contractor?” and included images of lawn signs from eight contractors, including Easton Roofing.

“I went on there, I looked at it, and I was like, ‘what the hell is going on?’” Fitzsimons said. 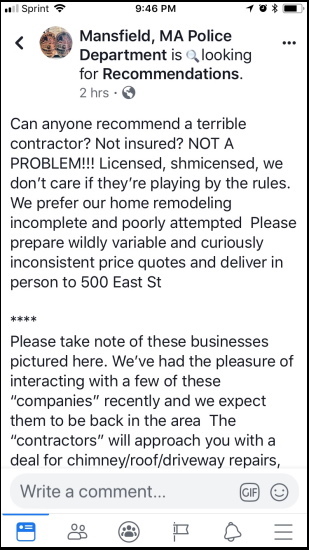 The post was meant to inform residents of scam contractors, an issue the roofing industry is constantly combatting. The post encouraged people to call 911 if they saw these companies operating in the area.

Fitzsimons, who is both insured and licensed as a roofing contractor, was shocked to see he was being lumped in with these other companies. He went to the police station that night to have it sorted out, but was told they would take it down pending an investigation.

By then, however, he said the post had “spread like a virus,” having been shared hundreds of times. The next day, the police concluded an investigation with the Executive Office of Labor and Workforce Development, removed the post, and issued an apology to Fitzsimons.

“If you see Easton Roofing working in the area, please don’t put them in the same category as the scammers that we posted about last night and who are taking work away from their legitimate business,” the post stated.

The roofing contractor, however, believes the apology is too little, too late.

“The bell had been rung, you can’t un-ring the bell,” Fitzsimons said. “The damage has been done.”

The Boston area suffered a major storm on Wednesday into Thursday, blowing shingles from roofs and knocking down power lines. After a big storm like this, Fitzsimons normally has to clear his voicemail two or three times a day due to the call volume. As of Thursday afternoon, he said he only received about eight calls.

“I work in small residential communities in Massachusetts, and most of my jobs are referrals,” Fitzsimons said. “But now when people think of Easton Roofing, it’s the first thing they think of — they may just skip over Easton Roofing and get estimates from five other guys.”

Fitzsimons and his wife contacted a local news station, WFXT, to share their story. According to WFXT, Mansfield Chief of Police Ronald Sellon provided the following statement regarding the issue:

“The information related to the businesses in question was obtained and verified through a meeting with the Executive Office of Labor and Workforce Development. Upon discovering that Easton Roofing is a legitimate business, we immediately removed the post, updated the EOLWD, and issued a retraction as we would in any instance where a mistake was made. We’ve personally and publicly apologized to the owner of Easton Roofing.”

Founded in 1994, Easton Roofing’s jobs have included residential work alongside prominent projects for the state and institutes like Stonehill College. On Google, its 36 reviews total 4.9 out of five stars. Fitzsimons himself still goes onto roofs with his 30 other workers to build and restore roofs, but for now, only time will tell whether he can re-build his reputation.

The silver lining for Fitzsimons is that, when the Facebook post went live, he received multiple calls from past clients who said they didn’t believe it was real.

“A lot of the feedback I got was very positive from past customers who know me by my reputation,” Fitzsimons said. “The best way to protect a reputation is to start off with a good reputation and go from there. That comes from hard work and doing things the right way.”

RC Podcast Series: How to Protect Your Business from Cyberattacks

Roofing Scammer Busted in Australia After Ripping Off $900,000 From Homeowners

Florida Roofing Contractor Dies After Being Struck by Lightning