Is Your Building Conducive to the Installation of a Green Roof?

Any reason for installing green roofs on a building—whether it’s to save money or the environment—is a good reason.

According to the Green Roofs for Healthy Cities (GRHC) association, the North American green roof industry grew by a remarkable 24 percent in 2012. Part of this growth was spurred on by more cities recognizing the public benefits of green roofs and taking various policy measures to encourage their widespread installation. However, according to GRHC there is still enormous potential for growth of new green roofs on billions of square feet of buildings across North America.

Despite the potential, installing a green roof is not a decision to be taken lightly. There are several structural and site/location considerations to take into account. The most recent news of a probable green roof collapse at a Latvian supermarket should give one pause. Before allocating the time and resources, facility owners and managers should weigh the pros and cons of a green roof and what to keep in mind during the planning stages.

First, you need to consider the load capabilities of the building. The space that is designated for the green roof: Is it able to sustain the weight for the items that will be designed and placed on top of the roof? If the live weight load (after snow, for example) is less than 35 pounds per square foot, it will be harder to establish a green roof.

Second, consider the design intent of the green roof. Is the space going to be an area that individuals will be able to visit and enjoy up close, or is the green roof only to be viewed from a window, door, patio, etc? 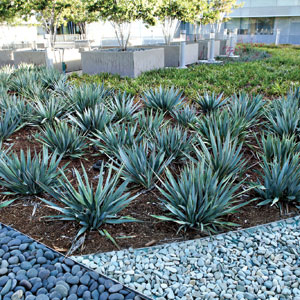 Third, take into account the location and climate of the intended green roof. A common misconception about green roofs is that they must always be green and vegetative, but there are several possibilities. However, one needs to consider the climate and the exposure. For example, the west side of a building is going to have a tremendous amount of sun and heat, so plant materials will need to be suited to sustain themselves in this environment. The north side will receive colder northern winds and can be more heavily impacted by freezing temperatures.

In many instances the natural environment is not the only factor to consider when designing a green roof environment. Microclimates will also be created from the structure surrounding the space. For instance, radiant heat will increase exponentially when planting next to mirrored glass. Overhangs will create opportunities for shade gardens. Planting soil depths and soil material makeup will determine how quickly or slowly a space will dry out in rainy or dry seasons.

Fourth, consider irrigation and drainage. Drainage is key in making sure that rooftop gardens do not become pools. Rock gardens are commonly used in situations where irrigation cannot be provided and temperatures are determined to be too extreme in a green roof environment. Draining and irrigation issues can be solved with construction, but this will add costs to any budget.

Finally, one must ask if a green roof is the best choice for achieving goals. Many of the functions of a green roof can be achieved through other means. For example, rainwater from roofs can be recycled for irrigation. Heat can be mitigated by shade trees, which are the backbone of the ecology and support far more beneficial insects than most green roofs ever will.

According to the Environmental Health Research Foundation, each day a 50-foot by 50-foot green space releases enough oxygen to support a family of four, and the Center for Disease Control and Prevention (CDC) points to the positive mental health benefits of being exposed to parks and green spaces.

Green roofs offer various opportunities for owners and employees to experience a little bit of nature. For example, the Fairmont Hotel in downtown Dallas developed a vegetable garden green roof, which allows the kitchen to provide fresh, locally grown herbs, spices and seasonal vegetables that go straight from the garden to the plate.

At the University of North Texas (UNT) Business Leadership building, a series of outdoor green roof spaces created by Southern Botanical and Lindsey White of Caye Cook and Associates allows students and faculty an opportunity to leave the classroom and office to take a break to reflect and study.

But there are also some concrete reasons for installing a green roof.

Green roofs can protect the roof membrane from elements that can be destructive, such as extreme heat and cold, water, mechanical damage and ultraviolet rays. In some cases, a green roof can double or triple the life of the membrane when properly installed and maintained.

Additionally, there are energy savings since a green roof acts as an insulator. Green roofs can also mitigate the heat island effect, reduce rainwater runoff, and to some extent, replace the flora that was destroyed by the footprint of the building.

For many cities, a compelling reason for green roofs is to offset the underlying, weak urban infrastructure that is overwhelmed by rainwater runoff.

New York City, for example, has an antiquated sewage system which, when overwhelmed by rainwater, forces the city to dump raw sewage into local bodies of water and makes New York beaches unusable for several days thereafter. In this instance, green roofs absorb 80 percent of the water that lands on them, so they can be a strategy to reduce the amount of water that reaches urban infrastructures.

The USGBC and its LEED certification program are spurring on the design and installation of green roofs all over the country. There are some regional variations, but that is often tied to climate. In Texas, for example, extreme temperatures can be somewhat of a limiting factor.

The increase in green roofs is often a matter of education, cost and technology, but signs indicate that they will become more productive and/or habitat-oriented. Green roofs will become popular as a site for food production, a habitat for beneficial insects, a way station for migratory birds and so on. This is a trend that is already happening in some cities and will continue to expand as food prices rise, and natural habitats continue to be reduced by population pressure.

And green roofs will continue to grow as a market segment as they establish track records and are supported by legislation.

For example, New York City gives a tax rebate for green roofs more than a certain square footage because the city recognizes that every square foot of green roof means less money it will have to spend upgrading the sewer and rainwater infrastructure.

In the end, consider function first and make sure your building and location are amenable to a green roof, or be clear on the extent of changes that need to be made and costs that need to be incurred for it to function properly and safely. Then be clear on the “why.” If the “why” is that you want to reap the qualitative benefits for employees and the environment, that is okay, too.

Chris Psencik is director of Development Operations for Southern Botanical in Texas and is a green roof specialist within PLANET, the national landscape industry association.
Richard Heller is CEO of N.Y.-based Greener by Design. He is certified by PLANET, the national landscape industry association, as a Landscape Industry Manager and Technician.

Cool Roofs: A Piece of the Green Puzzle

Extreme weather threatens your roof most. Improvements in roofing products and installation help more homes sustain less damage as we experience more foul weather in more places than ever before.