WAYNE, N.J. — As part of its continued relationship with Orange County Choppers, GAF has announced that its GAF Chopper will be inducted into the OCC 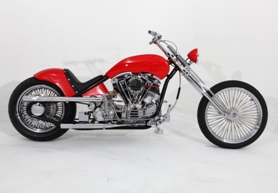 showroom at an event on Nov. 7 at the OCC Café in Newburgh, N.Y. The bike was featured in some of the final episodes of the hit series American Chopper in November and December 2012, and it symbolizes GAF’s commitment to investing in America and creating American jobs.

The Nov. 7 event will be held at 6 p.m. and is open to all GAF factory-certified contractors and their guests. GAF representatives and Paul Teutul Sr. will speak, OCC The Band will give a live performance, drinks and appetizers will be served, and guests will have the chance to have their photos taken with Paul Sr. Space is limited, and contractors can contact their local territory manager for tickets.

Orange County Choppers will be featured on a new television series airing on Country Music Television (CMT) beginning in November. GAF will appear in one episode where a GAF-sponsored bike was given away to a wounded veteran at a Kid Rock concert at the Sturgis Motorcycle rally this past August. The episode will air on November 23 at 9 p.m.

GAF is honored to have been selected to appear in this episode, which is a testament to the reputation that GAF and its factory-certified contractors have gained in the marketplace. This particular episode will highlight GAF’s successful Roofs for Troops rebate program, a key program that differentiates its Master Elite and Certified Contractors.

“GAF has enjoyed an incredible relationship with everyone at Orange County Choppers, and having our GAF bike inducted there as part of their world-famous chopper showroom is an honor,” said Paul Bromfield, senior vice president of marketing at GAF. “The chopper has toured the country at different GAF events, drawing crowds and highlighting our commitment to investing in America. It seems fitting that it should now live at OCC, another American-owned company with American-made products.”

How I Tapped Into Government Grants to Help My Company