Events such as the Beverly Hills Supper Club fire in 1977 instill fear in firefighters everywhere. In that Kentucky blaze, 165 people died in an overcrowded nightclub on Memorial Day weekend.

Several factors contributed to the tragedy at the popular nightclub, where as many as 3,000 patrons and 182 employees were on the premises. Insufficient fire exits, lack of sprinklers and an automatic sounding alarm, hazardous electrical wiring and lack of oversight and enforcement by authorities all played a role.

Memories of that disaster and others cross the mind of fire protection experts when they notice unusual building materials and installation methods, such as the placement of vertical smoke vents at Palmer High School in Colorado Springs, Colo.

Workers from the Works Projects Administration helped construct the school, which opened in 1940. The WPA, a program instituted by President Franklin D. Roosevelt, was started to help lift the country out of the Great Depression. WPA workers constructed 113 schools in Colorado, which was one of the biggest beneficiaries of the program. 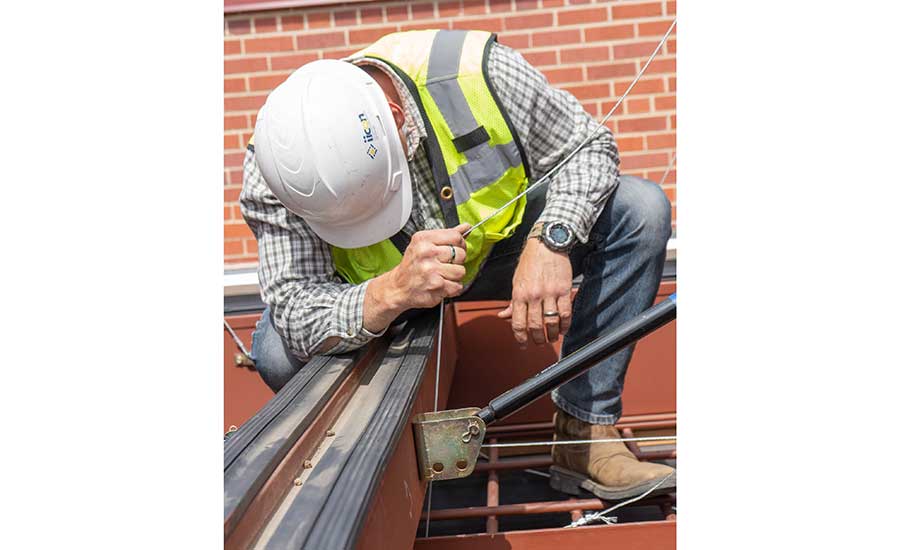 Portions of the existing concrete roof deck were removed to provide openings for the new smoke vents.

While the school is mechanically and structurally sturdy, the unusual placement of the smoke vents concerned Vernon Champlin, a senior consultant with the fire protection firm Jensen Hughes. The vents were placed in a pop-up, cast-in-place concrete structure on the roof.

Project Name: Palmer High School, which was built by the Works Projects Administration in 1940, needed new smoke vents installed on the roof.
Location: Colorado Springs, Colo.
Purpose: The existing vents, which were installed by Works Projects Administration (WPA) workers, were loose, uninsulated and did not have a UL listing.
Contractor: iiCON Construction
Challenges: The vents were installed in vertical walls of a pop-up, cast-in-place concrete structure on the roof of the school.
The Solution: Architects abandoned the existing vents in place and were sealed and insulated. Workers installed four acoustical smoke vents manufactured by The BILCO Company. Workers removed nearly 4,000 pounds of concrete and cut openings to match the size of the 5 x 7 vents.
Did you know? The WPA constructed 113 schools in Colorado and improved or reconstructed 381 others. The WPA served in Colorado from 1935-1942, with a peak employment of 43,200 by 1937.

“Considered advanced technology over 100 hundred years ago, the existing non-conforming smoke vent system in the school consisted of 24 vertically hinged doors that could be remotely opened 45 feet above the floor,” Champlin said. “The complex system and jute ropes and pulleys allowed the ventilation doors to fall open simultaneously via gravity from a single manual releasing point on the stage.”

“Even worse, there is no applicable standard for testing or maintenance, let alone guidelines for proper rope arrangement or replacement,” he said. “The greatest concern of the existing system was an inability to effectively test and reset the system to ensure proper operation.”

School officials also expressed concern with the smoke vents, which lacked insulation and allowed noise infiltration that interfered with school events taking place in the auditorium.

“Once you start to hear the history of why these safety features are in place, you think this needs to happen tomorrow,” said Jennifer Hotaling, assistant capital program manager for D11 Schools. “Staff and student safety is our highest priority.”

The unusual placement of the smoke vents was not totally foreign to Don Johnson, executive vice president of iiCON Construction, the general contractor on the project.

“They designed other schools in the area the same way,” he said. “I don’t know how they got them to function.”

LKA Architects, working with the Colorado Springs School District 11 Facilities Team and Jensen Hughes, designed a solution that abandoned the existing vents in place. They were sealed and insulated to improve energy efficiency and acoustics but remain in place.

“In our evaluation, we developed numerous code-compliant solutions that considered refurbishing the existing vent configuration, replacing the existing assembly with a modern manual system, or eliminating the entire assembly in place of a new electronic smoke control system,” Champlin said. “A priority was placed on cost effective solutions that provided for ease of on-going testing and maintenance.”

That solution, however, required the removal of portions of existing concrete on the roof deck. With assistance from a crane, saw cutter and intense labor, workers removed nearly 4,000 pounds of concrete. Workers installed vents in the newly created openings.

“I’ve done a lot of different things and we always find challenges,” Johnson said. “Anybody can build from the ground up. It’s when you go in and do renovation that you’re always going to find some challenges.” 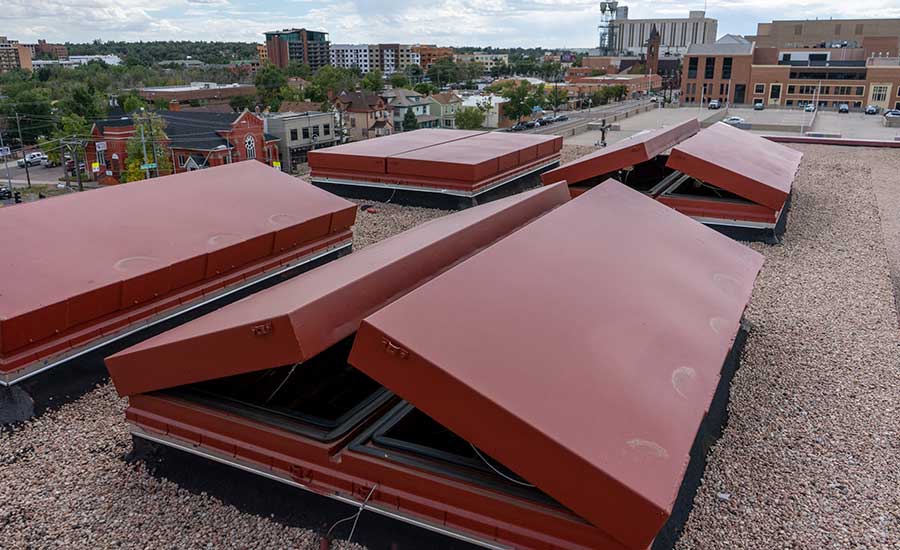 Acoustical smoke vents are designed to prevent noise intrusion and were particularly important for this project, which is located in the heart of Colorado Springs.

Roofers installed four acoustical smoke vents from BILCO, the manufacturer of specialty access products. The 5-foot by 7-foot vents include burglar bars to prevent unauthorized entry and a manual winch.

Creating the opening for the vents and extricating concrete was only the first part of the process to install the vents. Theatrical spaces present installation challenges due to rigging and cables that limit the work area under the roof.

“There was a lot of concern to protect the interior space when they were installed, and the logistics of getting up there and working from above the stage,” said Hotaling. “They had to build a platform under the concrete to catch the water, dust and debris. While they were cutting, we were checking for leaks and making sure there was nothing falling on the stage floor.”

Acoustical smoke vents are designed to prevent noise intrusion and are installed at theaters, concert halls and other applications that require limiting noise from external sources. BILCO vents have an industry-high OITC-46 and STC-50 sound ratings. The vents include a fusible link to ensure operation should a fire occur.

“Palmer High School is in a downtown area where there is a lot of siren noise,” said LKA Partners Architect Frank Kaiser. “Even weather, such as hail, can be loud. We wanted to make sure during performances we could mitigate exterior noise. We like the BILCO products. They seem to be the one that we see on most of our projects.” 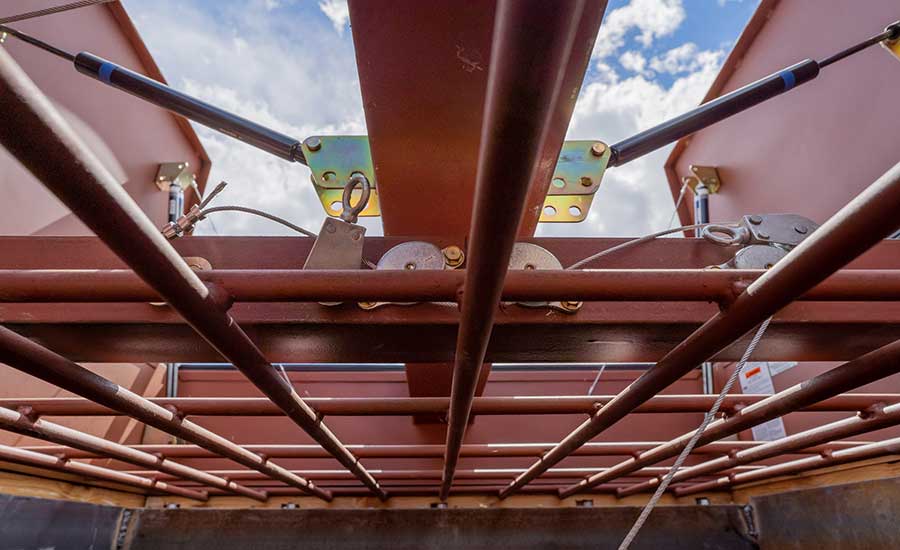 Besides the incompliant smoke vents and their vertical installation, the project is noteworthy in the Colorado Springs community because Palmer is one of the district’s education gems. It dates back to 1875, when it was the first high school in the city. Construction on the new Colorado Springs High School began in 1938 and the building was designed by Edward Burns, a 1921 graduate of the school. It was renamed to honor the founder of Colorado Springs, William Jackson Palmer, in 1959.

Kaiser, who has worked as an architect for more than 40 years, said the project is memorable for many reasons.

“It was a very specialized project,” Kaiser said. “We also worked with the local building department and the fire department to make sure it passed muster. The school was well-built and plenty strong to handle the new smoke vent openings. Everybody in Colorado Springs knows about Palmer High School, and we were glad to be a part of this project.”