POMPANO BEACH, Fla. – It took five years, but with patience and an old-fashioned approach to doing business – one based on a personal touch, building strong relationships and delivering quality work – Pompano Beach, Fla.-based Florida Quality Roofing (FQR) won the contract to replace the roof of ABCO Products Inc.’s headquarters.

By being willing to venture beyond “the way we’ve always done it” and try something different, they saved their client approximately $12,000 in materials costs and gained knowledge, experience and a new tool that will be a benefit on future jobs.

Miami-based ABCO Products offers a complete portfolio of cleaning tools used in the janitorial sanitation, commercial, retail, grocery and food service markets. When the company first contacted FQR, the 16-year-old built-up roofing system on its headquarters facility – home to warehouse, distribution and office spaces – was leaking around scuppers toward the back of the building. FQR Owner and President German Duarte walked the 77,600-square-foot roof with ABCO’S owner and warehouse manager to review problem areas and discuss the company’s needs and priorities. During a follow-up meeting, he shared his findings and offered options for both repairing and replacing the roof.

That process and emphasis on in-person interaction is standard procedure for FQR.

“We operate as a small, boutique-style company and provide very personal, one-on-one service,” Duarte said. “I work directly with every client – owner to owner.

“Buying a roof is one of the largest investments a building owner makes,” he added. “So, we go to great lengths to understand the client’s needs, tailor our recommendations accordingly, and give the client an opportunity to decide what works best them.”

This time, the client opted to make repairs in-house.

Often the story would end there. But fast-forward five years, and Duarte was back at ABCO Products. 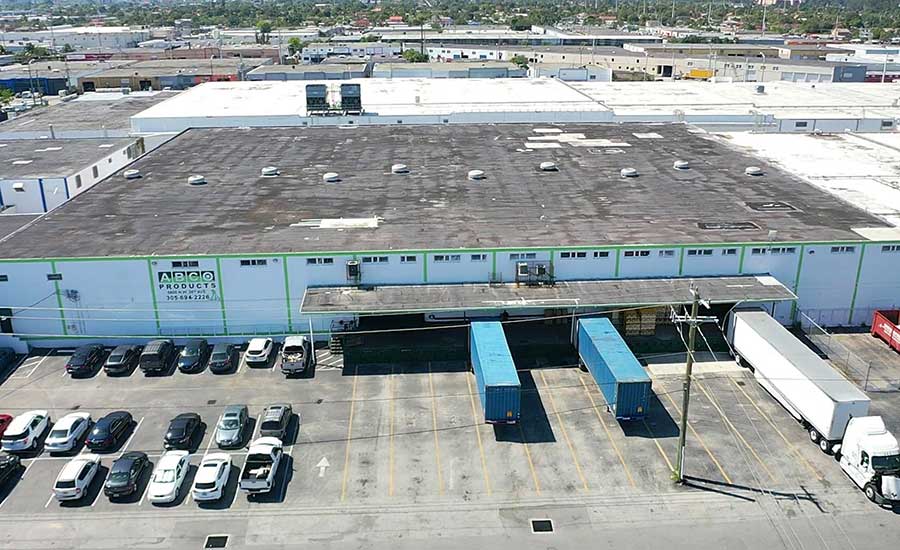 The roof was now 21 years old and there were leaks on the west side, where it sloped and drained.

“Different types of repairs had been made over the years, and none of them had been made by a professional roofer,” Duarte said. “It was a patchwork of silicone coating and torch-down modified bitumen. It was time to get serious and install a system that would be backed and warranted.”

ABCO Products’ insurer agreed. For coverage to continue, the roof needed to be replaced.

Like many buildings of its era in the Miami area, ABCO Products’ facility has a gypsum roof deck. Fleece Back TPO is one of the few single-ply membranes that would be compatible with it.

“The low price point of gypsum roof decks made them popular,” said Luis Ramos, territory manager – South Florida for Mule-Hide Products. “But when it’s time to attach a new roof to them, there aren’t many options.”

Miami is a High-Velocity Hurricane Zone (HVHZ) and all roofing products used there must meet stricter building code requirements to help ensure that, when storms hit, components remain in place and the roof can better withstand impact from flying debris. TPO-c Fleece Back from Mule-Hide Products is approved by the state of Florida and Miami-Dade County for use in HVHZs, holding both Florida Product Approval and Miami-Dade Notice of Acceptance.

Fleece Back TPO also could be attached directly to the gypsum roof deck without installing a layer of insulation, reducing labor and materials costs. Local building codes require the use of low-rise adhesive when attaching directly, as it provides higher wind uplift pressures than can be achieved when mechanically fastening the membrane to an existing gypsum deck. 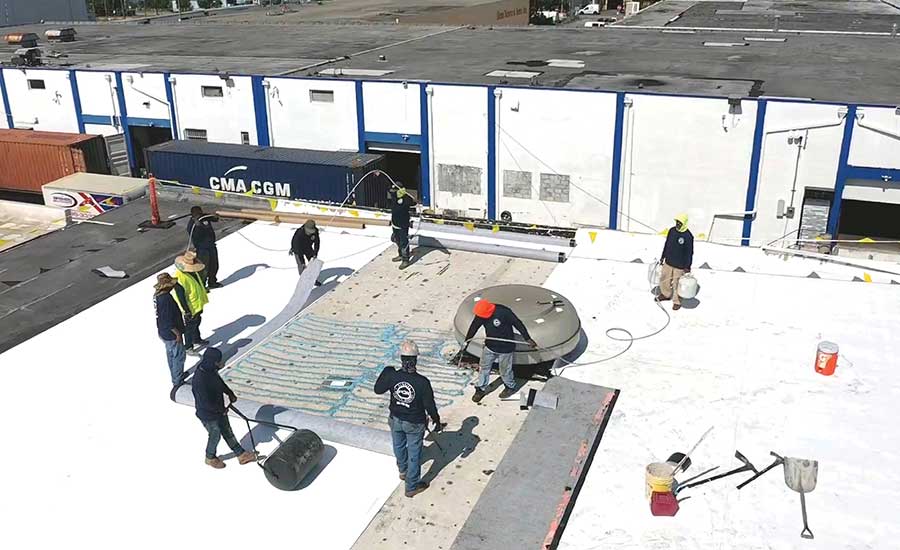 The replacement included specific measures to match High-Velocity Hurricane Zone requirements, including the use of TPO-c Fleece Back with low-rise adhesive.

Most contractors would not have given a second thought to the adhesive’s packaging, but would have stayed with the tried-and-true and used pressurized tanks. But FQR is always willing to consider products and techniques that have the potential to deliver superior performance, be faster and easier to install, or give their clients options not offered by other contractors.

So when Ramos suggested crunching the numbers for using 5-gallon jugs of adhesive, rather than pressurized tanks, Duarte was open to the idea. They found that the jugs would reduce the materials costs for the project by approximately $12,000.

To use the jugs, FQR invested several thousand dollars in an OMG Roofing Products PaceCart3™ dispensing cart. On a small job, or a large job spread out over several buildings, this would not have made sense; using pressurized tanks would have been more cost-effective than purchasing multiple dispensing carts and certainly easier than hauling a cart to and from multiple roofs. But on this job, the math worked in the jugs’ favor.

The roof’s large size and the jugs’ greater coverage rate – 35 squares per kit versus pressurized tanks’ 15 squares per kit when applying the adhesive every 6 inches on center – combined to reduce materials costs enough to cover the cost of the cart and significantly reduce the project’s cost for the customer. FQR also can now use the cart on future jobs – something they have already done.

Portions of the gypsum roof deck had deteriorated and were repaired with lightweight gypsum patch solution.

Based on an engineer’s drainage calculations, the nine existing scuppers were not sufficient to comply with building codes. Nine emergency overflow scuppers were added to help ensure that, should the primary scuppers become clogged, water could still drain away. 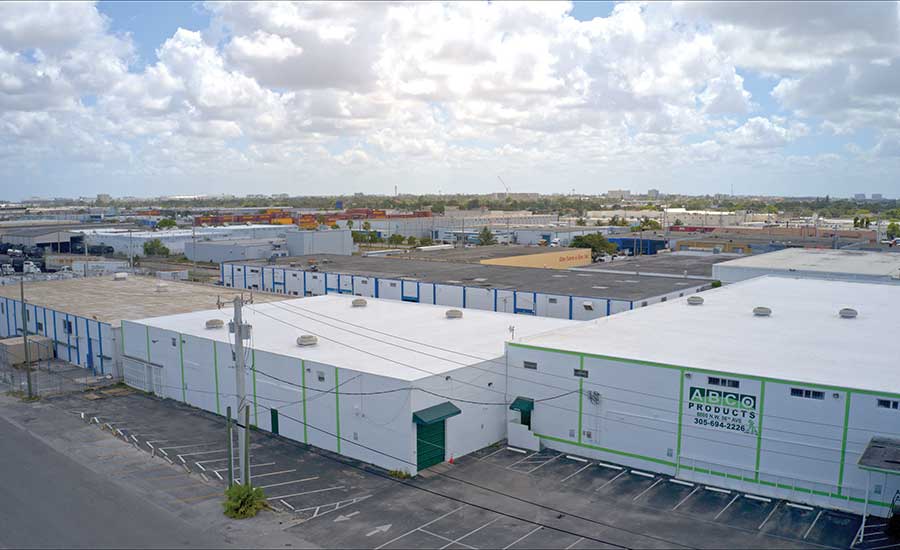 Once materials had been staged and an adhesion test confirmed compatibility between the low-rise adhesive and roof deck, it took approximately nine weeks to complete the job, with crews of 18 to 20 professionals on the roof each day. Duarte counts it among the smoothest-running jobs in FQR’s 20-year history.

Mother Nature cooperated, with inclement weather keeping the crew off the roof for only three days.

There were no rooftop units to contend with – a rarity, Durate noted. The only flashing required was around 10 mechanical fans used to remove heat from the building.

“We were pleasantly surprised by how convenient it was to work on the building,” Duarte said. “I think TPO with the wider 12-foot roll size was perfect for this job.”

Ramos inspected the roof days after its completion and found no problems that needed to be addressed. A 20-year No Dollar Limit Warranty was issued.

ABCO Products has protected its roofing investment with a maintenance agreement that includes annual inspections, cleaning, documentation of any damage, and any warranty-required maintenance. FQR encourages all of its clients to purchase such agreements.

“Performing yearly maintenance on any new roofing system helps ensure that the building owner’s initial investment is looked after and protected over the next 20 years,” Duarte said.

A maintenance plan also helps FQR strengthen its relationship with the customer. It shows the pride that FQR takes in its work, and that communication is two-way and ongoing – not just if the customer calls with a concern.

For Duarte, the most rewarding part of the job was working with ABCO Products’ management.

“It was a pleasure doing business with them,” he said. “They were courteous and grateful that we were helping them solve their roofing issue and insurance requirements.”