The latest chapter in the preservation of a National Historic Landmark built in the 19th century involved replacing the aging roof with the help of CertainTeed shingles.

Amid the digital buzz of today’s civilized world, the tranquility of a place like Great Camp Santanoni only comes with intentionality. Nestled gracefully into its woody upstate New York isolation, direct access to this historic site is available only on foot, bicycle, cross-country skis, or by a horse-drawn wagon ride down a five-mile carriage road. No motorized vehicles. No impeding noises. No unwanted distractions.

At Great Camp Santanoni, the nuanced texture of the historic log structures weave a rich narrative dating back to 1892. That’s when prominent New Yorkers Robert and Anna Pruyn purchased nearly 13,000 acres of land in Newcomb, N.Y., and hired famed architect R.H. Robertson to help them design an idyllic retreat, complete with a working farm.

What they eventually created was an environment in which Japanese-influenced architecture coexists harmoniously with the surrounding spruce trees and lake waters.

Nearly a century and a half since, ownership of the property now resides with the state of New York, which purchased it in the 1970s. In the latter part of the 20th century, however, Camp Santanoni saw little use and would have disappeared completely if not for a revitalization launched in the early 1990s.

Over the past 30 years, under the joint efforts of the New York State Department of Environmental Conservation, the Town of Newcomb, and the nonprofit preservation group Adirondack Architectural Heritage (AARCH), the camp has been brought back to life.

Preservation of this nature and magnitude requires constant attention, and the effort persists today, making Camp Santanoni a sought-after public vacation destination for lovers of the outdoors, history, and architecture.

Looking Up: Restoring a Roof 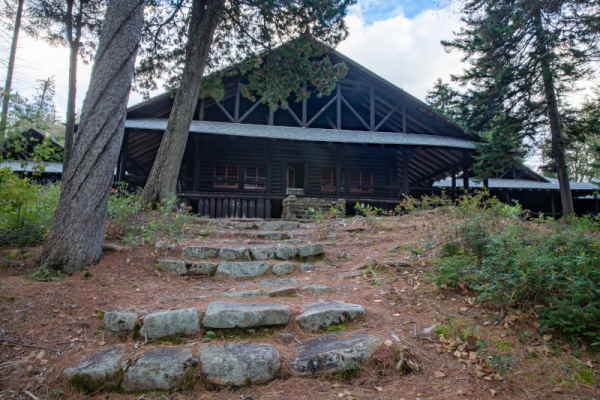 Situated on Newcomb Lake and thousands of acres of forests, mountains, and streams, Camp Santanoni features Japanese-inspired architecture with buildings designed to live in harmony with the landscape. Photo Credit: Jim Hamel & Titan Roofing.
In 2021, restoration efforts focused on replacing the roof of the Main Lodge, the most prominent of the many structures on the property. It was a critical measure taken to ensure the continued protection of the cherished building. At 16,500 square feet of roof area — not to mention seven chimneys, 38 valleys, and several dormers that required repair — it also was no small undertaking.

Since Camp Santanoni is a National Historic Landmark and recipient of funding from the National Park Service's Save America's Treasures program, New York State and the Town of Newcomb had to adhere to firm standards for historic preservation.

“In a case like this, the primary design goal is always to protect the historical resource,” said Randall Crawford, principal for the project’s architectural firm, Crawford & Stearns, which has focused on architectural preservation in upstate New York for more than 40 years. “Following that, the goals are to preserve its historic details as best you can and preserve its historic character.” 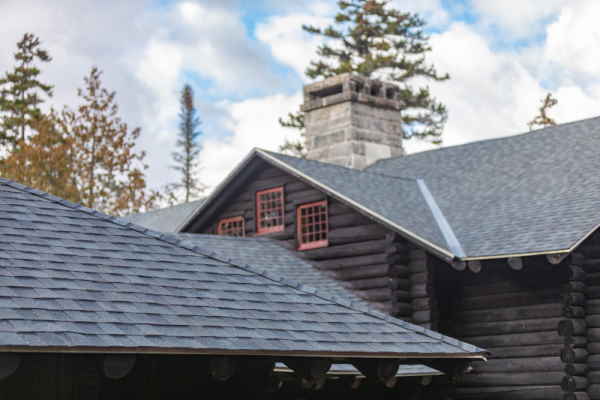 For the new roof, the product specification would harken back to the Pruyns’ original design intent: select a material that lives harmoniously with its natural surroundings.

Cedar shingles may seem like an obvious aesthetic choice for a 19th-century structure, but they presented the Santanoni team with significant performance and cost challenges in the restoration.

“The roof layout is pretty cut up — it goes up and down with humps,” said Bob Farrell, project manager of Titan Roofing, which handled installation. “Asphalt shingles have the ability to contour to that. Cedar shingles would’ve required a lot of shimming, and they’re too rigid to conform to the roof structure as it stands now.”

“The roof tends to get limited maintenance,” said Higgerson. “So we wanted a roofing material that wouldn’t be affected by algae growth and that would offer more longevity than a wooden roof. We also wanted a color that replicated weathered cedar — an understated silver-gray neutral.”

With a dual-layered design, Landmark emulates the dimensionality of true wood shake. Plus, Landmark offers a highly durable fire-resistant construction, StreakFighter® copper-infused anti-microbial surface granules for long-term resistance to blue-green algae, and a 40-year warranty — all of which ensures the roof’s durability over the long haul to protect the Main Complex against the extremes of the Adirondack climate.

Crawford echoed Higgerson’s sentiments: “In this particular climate, wood shingles do not have the greatest performance track record. We went with what we believed was a more durable, more predictable solution that provided a reasonable level of equivalency to the visual appearance of a fully weathered cedar shingle roof.” 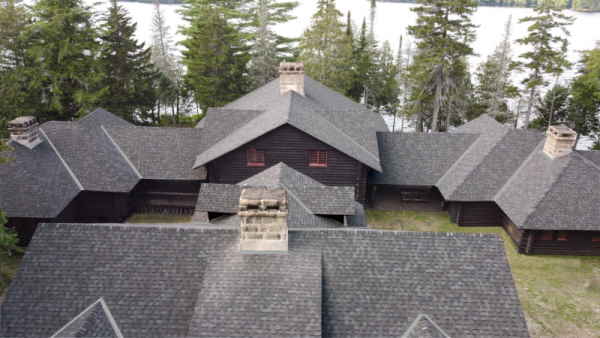 Among the array of color options, the Santanoni team selected Colonial Slate, which offers an ideal mix of earthy grays to recreate the look and feel of natural wood.

“What starts to happen in the fall is that pine needles will blow from the trees onto the roof, which softens the visual perception in a more historically appropriate way," said Crawford.

It’s a fine example of the structure’s continued coexistence with nature: the durability and algae resistance of Landmark allows natural elements to be incorporated to the appeal, enhancing the property’s natural beauty without negatively impacting the roof’s lifespan.

Beyond Design and Performance

Working around the roof layout, with its many chimneys, valleys, and dormers, created its own share of installation challenges. These were compounded by the larger factors of the camp’s remote location and the requirement that construction not interrupt continuous operation or public access — including working around the horse-drawn wagon schedule.

“This building is open seven days a week,” said Higgerson. “The roofers had to work in phases and set up snow fences around their work areas to allow visitors to get in and out safely.” 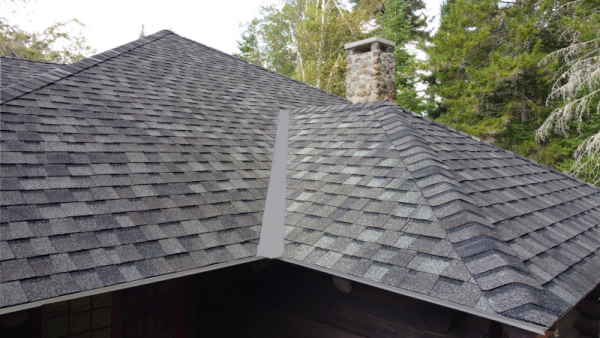 Titan Roofing even adapted to a four, 10-hour-day work week to minimize the impact of its presence. The in-house CertainTeed team brought a focus on customer service to the project that helped ease logistics and minimize any onsite installation issues.

“Over the years, we’ve done a lot of asphalt shingle roofs, and we tend to go with CertainTeed,” said Titan Roofing’s Farrell. "Our CertainTeed rep, Mike Hyde, has been really great to work with. We deal with a lot of larger-end commercial roofs; sometimes with smaller projects involving shingles, you don’t always get the representation with some manufacturers that you’d like. But our rep at CertainTeed always responds quickly. I go with CertainTeed because I know what I’m getting, and if I have any questions, or if there’s a concern on the job, they’re going to be there to get it resolved.”

Preserving the Past for the Future 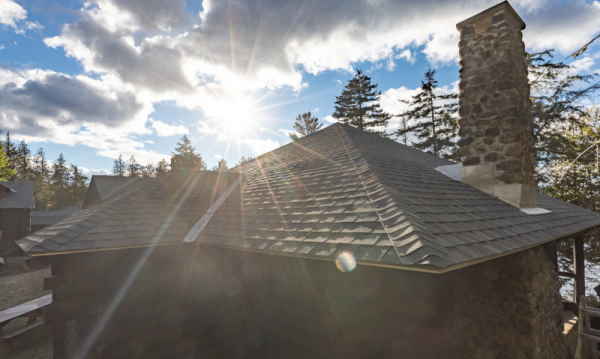 With its mix of durability, resistance to the elements, wood-look aesthetic, and economical price point, CertainTeed Landmark was the ideal product for the preservation of Camp Santanoni’s Main Complex roof for decades to come.

It was such a successful match that the property’s second largest structure, the Gate Lodge Complex, has since been reroofed using Landmark shingles.

Camp Santanoni is located in the Adirondack Park and is within 2.6 million acres of protected public land known as the Adirondack Forest Preserve. Santanoni is listed on the National Register of Historic Places and has been designated as a National Historic Landmark. The public may visit Santanoni 365 days a year, and the camp’s buildings are more fully opened to the public, with interpretive tours, July 1 through Labor Day.