The Confidence to Start Her Own Roofing Company Didn’t Come Easy, but has Jen Silver on the Move in the Mountain West

Just two years since launching Roofing Utah in Salt Lake City, the 41-year-old has her hands full with contracts, bid specifications, sales targets, recruiting, safety requirements, client expectations — the list seems only to go on and on.

But that’s the job of an entrepreneur, after all. Especially when starting out in a relatively new field.

“I’m really tired, but that’s nothing new because I’m a business owner. I never sleep,” she said.

Add on the responsibilities of being a single mother of four active and engaging children, ages 9 to 17, and it’s enough to wear anyone down.

She managed to persevere through the COVID-19 pandemic keeping her team of eight employees safe and heathy, while also exploring new business opportunities in surrounding states, speaking before groups of roofing contractors and honing her craft. In late fall, she and two of her children tested positive for COVID, meaning mandatory quarantine.

“We’re a small company and it’s not like we’ve got a whole experienced team that does everything. I’m wearing a lot of those hats,” she said, acknowledging she was in the office playing catch up.

Though the symptoms of her breakthrough case were relatively mild, Silver granted multiple time-off requests and gave everyone not in production a “home day” outside of the office so she could head in.

“There are days when it is a lot of fun, some days that are really stressful,” she said. “But I love the roofing industry in general, and I think that it is full of great people. And I’ve been fortunate enough to surround myself with like-minded people that want to see roofing go the next level, as a profession.” 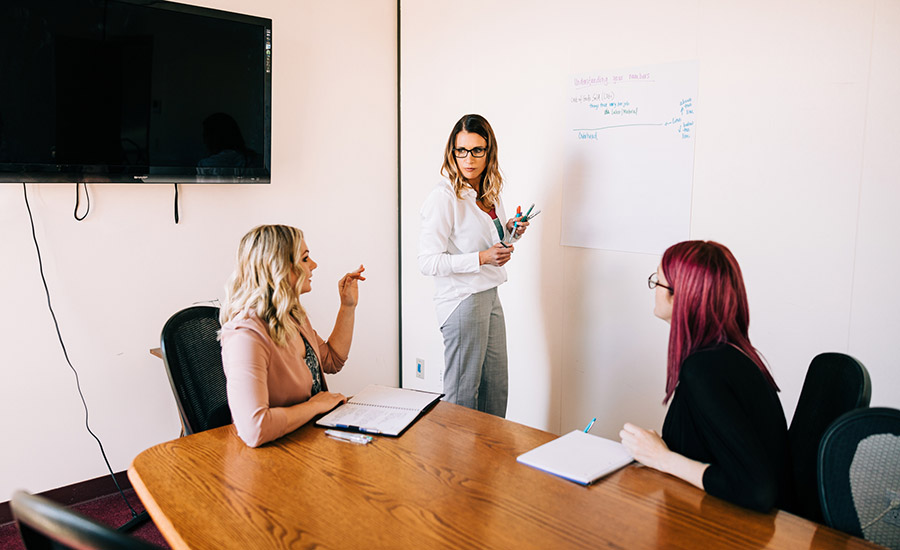 “There are some days that are really stressful. But I love the roofing industry in general, and I think that it is full of great people,” said Roofing Utah President Jen Silver (center), pictured here brainstorming with Sales Manager Kara Reudter (left) and Office Manager Tiffany Smith. “I’ve been fortunate enough to surround myself with like-minded people that want to see roofing go the next level as a profession.”

Silver started her professional career in the restaurant and hospitality industry, rising up from waitress to a general manager role before marrying a member of the U.S. military. They were stationed abroad and lived in Japan for several years before resettling in Utah in 2014. The couple divorced, and by 2017 Silver faced single-motherhood and wasn’t just in need of a job, but longed for a fulfilling career.

She got her first real glimpse into the roofing and construction trades working the front desk at a local SRS Distribution branch. The job exposed her to a high-octane sales operation, pricing, and a plethora of roofing products she’d never heard of before. But even more valuable, she said, was getting to know the manufacturer reps., contractor liaisons and trainers helping contractors succeed. And she met virtually all the roofers in the market, including one she ultimately went to work for.

After rising up to general manager of about 30 employees, and helping the company virtually double its revenue in less than two years, Silver said the owner closed the business due to some legal issues. Always driven, and confident in her abilities to problem solve, Silver got her general contractor’s license, said she recruited some of that company’s best crew and launched Roofing Utah to serve the area’s growing residential market.

“Did I feel 100% confident in starting my own roofing company? No, I didn’t,” she said. “But I knew business, and I felt like it was more important to understand that – how business works – than a specific trade and all its intricacies.

“In my world, I can hire someone to help me with the intricacies of the trade if I run into things I don’t know. But it’s really hard to hire somebody to run your business the way you want your business to be run.” 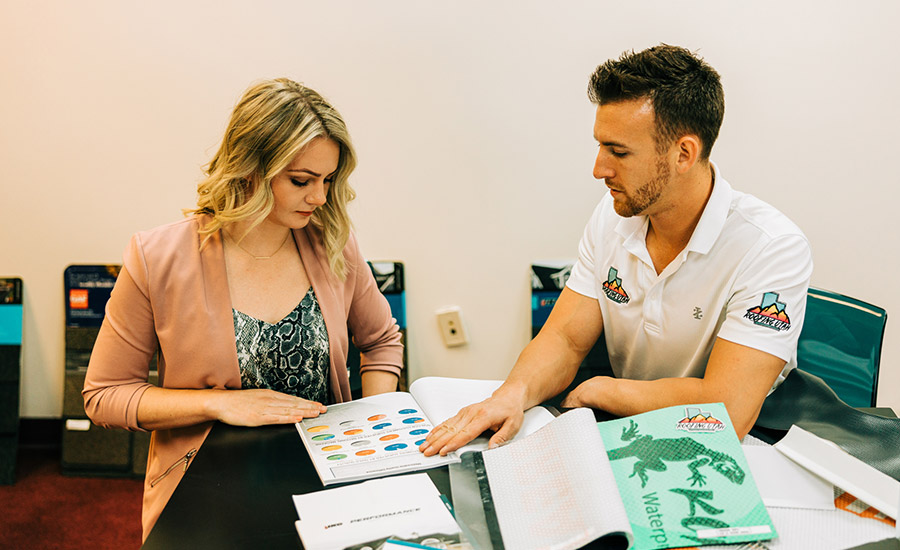 When it comes to the job, Silver’s approach is based in a retail model. She said she offers one price system and offers financing to every customer, including those working with insurance companies. Her team completes the job and then the customers submit the claim independently. Silver doesn’t interact with insurance, won’t negotiate with adjusters, and tries to limit any of the other obstacles that arise between her team and the client.

By treating all the jobs the same way, she believes her customers are more at ease, and she knows she is by cutting out reliance on insurance companies to pay the bills. Her reasoning is simple: the contract is with the homeowner, and handing over control of the payment timeline, structure and terms to another party puts the company cash flow at risk.

Though unconventional and despite naysayers, the system is working. Roofing Utah has a strong client list in the residential sector, and is expanding into commercial and solar work. She said she’s been able to find opportunities by working with integrity, completing jobs like they said they would, and communicating with people.

“I got to know a lot of the roofers in this market, and there is a lot of frustration,” she said. “We get more builders that say, ‘We don’t expect everything to be perfect. We just want to work with somebody that’s going to be honest with us.’ There’s a lot of people that don’t want to communicate or avoid communication, and it’s that breakdown that’s given us some of our opportunities.”

Many of the other opportunities arrive via Roofing Utah’s active and robust social media campaigns.

Born out of necessity after losing promised payments for work completed on behalf of her former employer, Silver began to steadily build a social network that helped push Roofing Utah’s profile out to more and more people. She said she was a bit reluctant having sworn off social media personally about a year earlier due to all the “drama.” But it was free, after all, and she had to start somewhere.

Silver launched 400 friend requests on Facebook to people she didn’t know. She sought out business leaders, real estate agents, mortgage brokers, loan and title officers — essentially a gauntlet of people that she was confident would come across others in need of roofs in the course of doing business.

The gamble paid off, turning her meager stable of 127 “friends” at the start of 2021 into the more than 5,000 vetted and engaged digital followers now. Not only did those professionals provide ripe referrals, complete strangers started reaching out from community message boards and neighborhood associations.

“I never would’ve turned to social media had I had capital to spend in other ways,” she said. “l looked at it like networking, and as a way to get my name out there and save my business. In reality it shifted into something greater than I ever imagined. I’m 100% sure that’s why we’ve made it.” 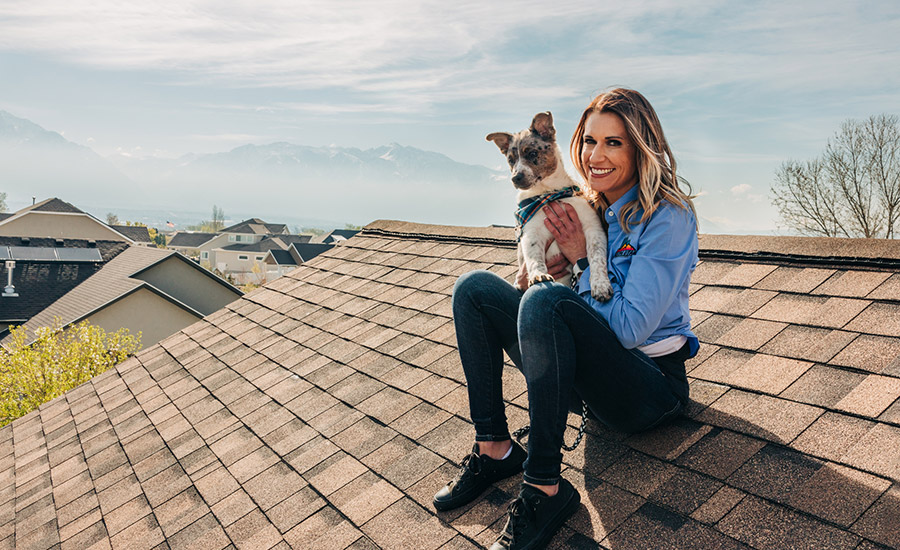 There’s a lot for Silver to look forward to. Utah has one of the most stable state economies in the country, and though it gets its share of snow and low temperatures, Salt Lake City’s elevation allows roofers the opportunity to work nearly year-round.

She describes herself as a forward thinker, non-conformist, and someone that hates to hear “no” when she sees a possibility to improve. She also seeks balance, which is admittedly difficult when trying to be the assertive boss, while still trying to maintain a softer touch with customers and community partners.

She said she feels right at home in a male-dominated industry, and that being a woman in roofing is empowering. She’s become an outspoken advocate for recruiting more women into the field, and is working with National Women in Roofing to help drive change.

Both at home and in the office, Silver said she tries to lead by example and allows people to be autonomous, to learn their self-worth. She relishes in finding the thing within an individual that’s holding them back, and helps them try and push through the barriers themselves. She did it when she started Roofing Utah, and is reminded frequently that it’s an ongoing process.

With winter — arguably the roughest time of the year — setting in along with a new team of salespeople to nurture in her style, Silver said it’s easy to feel overwhelmed. That’s when she turns to a little trick she learned while adapting to life’s unpredictability along the way that propelled her into a new career and helped redefine her life.

“Name the negative voice in your head,” she explained. “Mine is Karen. She’s the one telling me I’m not worthy, that it’s not going to happen, that I’m not good enough and will fail. When you name that voice, it’s the first line of delineation that it’s not real. That negative self-talk has come from other people, at some point in your life, telling you something they think about you, or you reacting to something they’ve told you. None of it is real or true. But when you don’t separate it from yourself it feels real, and true.

“It’s incredibly empowering to say: ‘Just shut up, Karen!’ and move on.”

Best of Success 2021: Roofers Reunite at the Star

On the Mark: CentiMark is at the Forefront of the Roofing Industry in North America and Shows No Signs of Slowing Down.

Cutting No Corners: D&D Roofing Takes Pride in Every Job