This website requires certain cookies to work and uses other cookies to help you have the best experience. By visiting this website, certain cookies have already been set, which you may delete and block. By closing this message or continuing to use our site, you agree to the use of cookies. Visit our updated privacy and cookie policy to learn more.
Home » Roofing Industry Continues Giving Back to Veterans, Communities During Tough Year
Low Slope RoofingSteep Slope RoofingCoronavirus Coverage

Although the roofing industry is still reeling from the effects of the COVID-19 pandemic and the supply shortage, roofing companies haven’t slowed down in giving back to others in need.

Among them was Pride Roofing & Construction in Loveland, Colo., which donated $5,000 to the Weld County Food Bank, provided a roof to a police officer through its first-ever roof donation program and supported the Boys & Girls Club of Greeley by donating $19,250 during a gala event.

"We believe in doing our part to support our community," said Kristopher Wagner, founder and CEO. "We want to give back whenever possible."

It’s a sentiment roofing contractors throughout the country are embracing, as seen in the past year by the numerous headlines created by roofing companies giving back to their communities.

One program that continues to give back is the Owens Corning Roof Deployment Project. By working with groups like Purple Heart Home and Habitat for Humanity, the manufacturer sends it Platinum Preferred Contractors to a veteran’s home to provide roofing services at no cost. Owens Corning donates materials and the contractors provide the labor.

Although supply shortages haven’t been a deterrent, the challenge in helping out veterans comes in the form of finding candidates. Stephanie Weigel, operations manager for Advantage Construction in East Bethel, Minn., said her company actively promotes and advertises the Owens Corning program to find veterans in need.

“It’s really, really hard to find veterans who will seek out services because they’re all very proud, they always think somebody else could use it more than them,” Weigel said. “The tagline I’ve been playing with this year is, ‘If you’re in need of a new roof and you’re a veteran, it’s your turn.’” 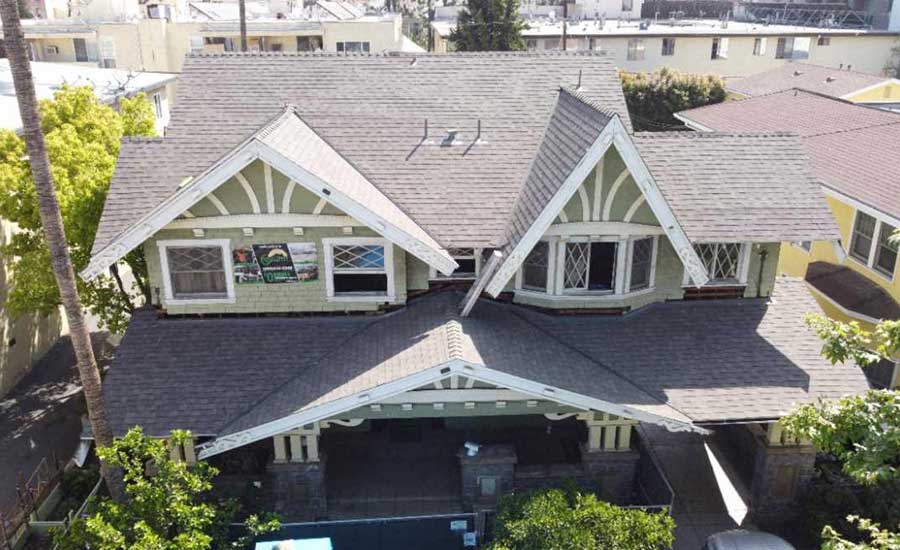 IKO and National Women in Roofing provided a new roof to the Alexandria House in California.

The need is certainly there. Since the program’s inception in 2016, Owens Corning Roof Deployment Project has helped put roofs on more than 250 homes. Below are just a few of the roofing contractors who helped military members this year through the program:

Naturally, other roofing contractors assisted veterans independent of the Owens Corning project. Monarch Roofing assisted Navy veteran Joseph Mark Barker in Myrtle Beach, N.C. with its “Roofs for Troops” program. Barker was the victim of an unethical roofing contractor and couldn’t afford a new roof, so Monarch stepped in to provide one at no cost.

Igor Darosa, owner of Universal Roofing Solutions, has worked in countries like Brazil and Egypt to help those in need, whether it’s through building homes or donating clothing. He wanted to do the same locally and sought out senior veterans to assist, and an opportunity arose in September.

In providing an estimate to Korean War veteran Walter Wong, Darosa initially said it’d be $9,000 for much-needed roofing repairs. However, when Wong asked if there was a veteran discount, Darosa crossed out the price and wrote a zero.

“This was exactly the kind of person I wanted to help,” Darosa told WickedLocal.com.

Beacon Building Products once again held its Beacon of Hope contest, which provides deserving veterans with new roofs or funding to help make roofing repairs. This year, the company is providing six veterans with roofing repairs or replacements at no cost, while six others will receive $2,500 each for repairs.

“We received dozens of nominations citing veterans across our country facing financial hardship and health disabilities while living under roofs in need of repair,” said Jamie Samide, Beacon’s vice president of marketing.

Veterans aren’t the only ones in need of assistance in these tough times, and roofing companies stepped up to do their part. Reliant Roofing, Solar & Hurricane Shutters in Florida is giving three teachers free roofs through its annual Every Shingle Heart program and backing them with GAF 25-year warranties.

“As a local company that cares immensely for the citizens in and around Northeast Florida, we want to give back to those who truly need it,” said Sean Shapiro, CEO at Reliant.

In April, IKO and National Women in Roofing teamed up to provide a new roof to Alexandria House in Los Angeles. The house is a transitional residence for women and children moving from emergency shelters to economic stability and permanent housing, and needed a new roof after it caught fire.

“This whole project began when Maria (Alcala), who works at RoofLine and is a member of NWiR, called and asked if IKO would be able to donate materials to help restore the house,” said Juan Trujillo, IKO’s territory sales rep in the Los Angeles. “IKO and its distributor, RoofLine, were able to provide 6,000 square feet of shingles for the project.”

“Tim Kanak at Perkins Roofing called me to tell me about the project. He informed me that the roof was leaking badly and desperately needed to be replaced,” said John Massengill, a Polyglass sales agent with Building Envelope Solutions. “He asked if I could rally some of the manufacturers for participation in the project and I told him that I would.”

GAF, meanwhile recently helped build a home in just five days with Habitat for Humanity in Tuscaloosa, Ala. GAF and Good360, a global leader in product philanthropy and purposeful giving, also expanded their partnership to establish a new community redistribution center to provide disaster relief support throughout the Gulf region.

“Part of our role as leaders in the roofing industry is to help the communities where we live and work to thrive," said Jeff Terry, vice president of CSR and sustainability at GAF. "That has become even more important over the past year with the COVID-19 pandemic and we are committed to working with our contractors and partners to continue to help improve people’s lives and build resilient communities.” 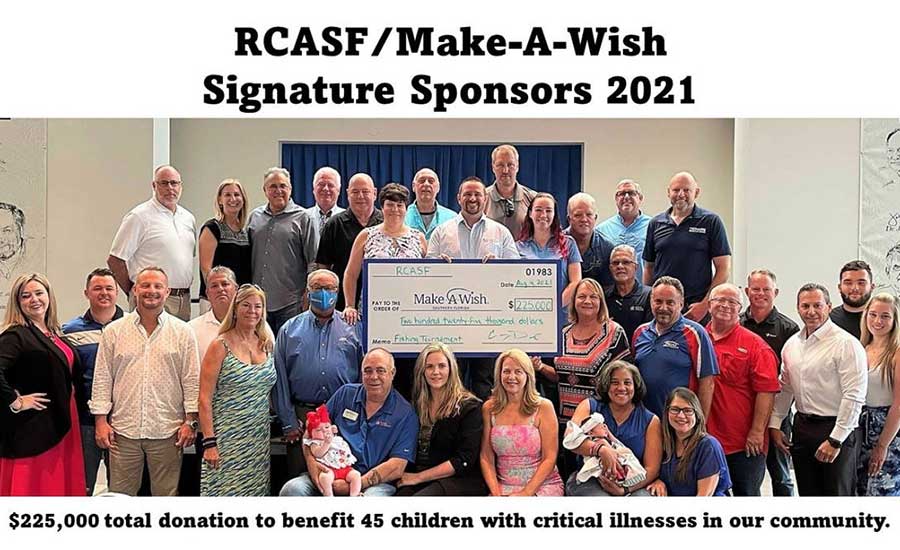 RSASF made the largest non-corporate donation to the Make-A-Wish Foundation of Sothern Florida.

Roofing companies did more than provide labor and material donations in the past year. Many supported local organizations and charities to ensure they could serve their communities. CMR Construction & Roofing presented Ragin Country Crawl on Nov. 7, a one-night benefit concert to raise money for hurricane relief efforts in Louisiana, while in Florida, the Roofing Contractors Association of South Florida donated $225,000 to the Make-A-Wish Foundation and $25,000 to the IGFA's Junior Angler's Educational Program.

Companies even put forth efforts to improve their communities while also benefiting the roofing and construction industry. Simpson Strong-Tie revealed it is donating $600,000 to the Building Talent Foundation over the next three years. The foundation advances the education, training and career progression of young people and people from underrepresented groups as skilled technical workers and business owners in residential construction.

“Supporting the next generation of skilled trades talent is an important part of our commitment to our customers and our industry,” said Simpson Strong-Tie CEO Karen Colonias in a written statement.

Roofing Industry Giving Back to Veterans Despite Material Shortages

Roofers Give Back to Communities to Fight COVID-19