This website requires certain cookies to work and uses other cookies to help you have the best experience. By visiting this website, certain cookies have already been set, which you may delete and block. By closing this message or continuing to use our site, you agree to the use of cookies. Visit our updated privacy and cookie policy to learn more.
Home » Project Profile: School's Design Inspired by Agriculture, Aviation and a Classic Car
Cool RoofingMetal RoofingRoofing Project Profiles

Thaden School in Bentonville, Ark., celebrates the class of 2021 — the first to graduate from this new independent middle and high school. As the next academic year begins, returning students will be welcomed back to an expanded offering on its 30-acre campus. The three of the newest school buildings — "Reels," "Wheels" and the performing arts center — were designed by Marlon Blackwell Architects and feature architectural coil coatings by Sherwin-Williams.

Thaden School is named in honor of Iris Louise McPhetridge Thaden (1905-1979), one of the greatest aviators of her time. Her childhood home in Bentonville was renovated and now serves as the school's office of admissions. 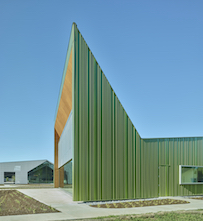 During the last 25 years, the population in Northwest Arkansas has more than doubled, creating opportunities and challenges in planning and design. Endowed and structured to allow students from all socio‐economic backgrounds to attend, Thaden School's unique curriculum combines academic excellence with learning-by-doing.

The school's "whole student/whole body" pedagogy features learning opportunities both indoors and outdoors, keeping sustainable connection to the natural and built environments. At full build-out, the campus and its structures will support as many as 600 students, although the size of each instructional section will not exceed 15 students on average.

"Thaden School exists at an interesting intersection in Bentonville, Arkansas: It sits on the site of the former county fairgrounds and it is also tied to the historic downtown square. Within this urban, pastoral condition, the school buildings' design reflects this sense of being both nature-made and culture-made," observed Marlon Blackwell Architects' principal, Marlon Blackwell, FAIA. "Exploring these dualities, we consider color that reflected both the surrounding prairie grasses and the automobile influences of the 1950s and '60s.

"In addition, the school's namesake, Louise Thaden represents the golden age of aviation. We used this as a point of departure to further examine the colors and coatings of classic cars and planes, while creating a resonance with the Osage prairie that is planted around the building."

To identify the perfect color for Reels and Wheels, Marlon Blackwell took "a deep dive. We extensively researched the colors of the automotive industry from the '50s and '60s," said Blackwell. Their search led them to the Carroll Shelby's 1967 Mustang Shelby Cobra GT500 and its green-gold metallic flake coating popularized by custom car painter Dean Jeffries.

Blackwell remembered this was only the first step.

"The question was how close can we get to this classic look? Working with the team at Sherwin-Williams, the challenge wasn't so much on matching the color, but rather how much flake was needed to achieve the metallic effect. This was in 2017, before Sherwin-Williams introduced its Fluropon Effects Nova coatings. Our custom coating for Thaden was a precursor to those."

"Morin coordinated everything with the finisher to ensure the specified performance and appearance," said Blackwell. "The metal panels were finished in the same color and coating, then installed on the roof and exterior walls. The result is this protective green-gold outer metal shell, composed with syncopated ribs, over a softer underbelly of clear-coated plywood, carefully placed openings and large entry porches."

"We had four different panel profiles that were randomized to create the dynamic pattern on the building's roof and walls," Blackwell explained. "We worked closely with Morin and the Milestone Construction to make sure we achieved this great effect. The color of that green truly takes on a dynamic quality as it reflects light throughout the day."

Doug Matthews, regional sales manager for Morin Corp., noted: "The design impact of variable panels and the shadows and dimensional depth to these panels, as well as angular cuts, play well with the 'curiosity and creativity' theme of the overall campus."

"There were a lot of details on the trim and edging, multiple profiles for custom look on the walls, custom color matches, roll forming and on-site support. It's a culmination of working with the architect, the installer and G.C. to manage all the parts and pieces," said Matthews. "The resulting project is a stunning complete metal skin system."

The campus took cues from the region's many chicken farms. These land parcels tend to be organized in an east-west orientation and with multiple agricultural structures. Split to become a 'Y' shaped plan, the Reels building has a predominantly east-west orientation to control solar gain and its folded form creates ever-changing light conditions, reaching out to the landscape and bringing in the sky. In addition to adapting heritage farmstead practices, Reels' and Wheels' metal rooflines also "pitch and roll" to evoke flight paying tribute to modern innovation and the area's history of flight.

"The Reels building transforms the simple, vernacular form of a poultry house with subtle shifts in plan and section into a spacious, light‐filled academic building," said Blackwell. "Bifurcated to become a 'Y' shaped plan, the Reels building has a predominantly east‐west orientation to control solar gain. The split in plan also reduces the overall length, while ensuring each of the academic spaces within have ample daylight."

In the center of the building, a large, covered breezeway connects the three wings of the Y-shape, providing space to gather and have outdoor classes.

"The faceted, folded form provides each space with its own sectional character with ever‐changing light conditions, reaching out to the landscape and bringing in the sky," said Blackwell. "At the southern end, the roof springs upwards, gesturing to the main road at the historic Thaden home nearby. The sudden change in height balances the otherwise long, low form of the Reels building."

Imagining Louise Thaden viewing the school campus from the air, she would see its symmetrical elegance: The performing arts center and great hall buildings are finished in white anchoring the northeast and southwest corners, and the Reels and Wheels buildings sparkle in metallic green on the opposite corners. The structures integrate with gardens, pedestrian pathways and an extensive trail network throughout Northwest Arkansas to connect Thaden School with its community, its culture, its ecology, its history and its aspirations for the future.