This website requires certain cookies to work and uses other cookies to help you have the best experience. By visiting this website, certain cookies have already been set, which you may delete and block. By closing this message or continuing to use our site, you agree to the use of cookies. Visit our updated privacy and cookie policy to learn more.
Home » Contractor Profile: All Star Contractors
Roofing Contractor ProfileSteep Slope RoofingRoofing TechnologyCoronavirus Coverage
Sponsored by Beacon

After four years in the U.S. Army, followed by four years of active duty in the Marine Corps, Troy Fleming landed a job as a sales representative for a contractor concentrating on gutters and siding. It was a job that effectively ended his military career — trading in his sidearm for sales pitches and looking forward to a new life renovating homes. But life has a way of coming full circle.

While working for the Nashville, Tenn.-based company, a hail storm battered the area 40 miles from downtown. However, Fleming’s boss and the project manager were content with their business, and growth didn’t seem like a priority. So Fleming took it upon himself and sold 32 insurance jobs in two weeks — compared to the one job the owner sold.

“I spoke with my wife and told her if I was ever going to step out on my own, this seemed to be the most opportune time,” he said.

They applied for a $25,000 personal line of credit in 2003 to form All Star Contractors. It was grueling work, and they initially struggled to stay in the black, but they persevered, adding roofing to its gutters and siding services. Three years later, the military re-entered Fleming’s life in the form of a contract with multinational construction company Lendlease for a project at Fort Drum in New York.

“We landed the Fort Drum project, which ironically, I was raised as a child three miles from the gate to that base,” he said.

The project was challenging, all the more so due to snow and freezing temperatures, but again they persevered and prevailed, leading to additional projects. The company’s big break in roofing occurred in 2017 with a seven-phase project to roof 16,000 squares for Peterson Air Force Base in Colorado Springs, Colo., that were damaged by hail.

“After 10-plus years of only being viewed as a siding and gutter company, this was the start to us being recognized by Lendlease as a reputable roofing company for them as well,” Fleming said. 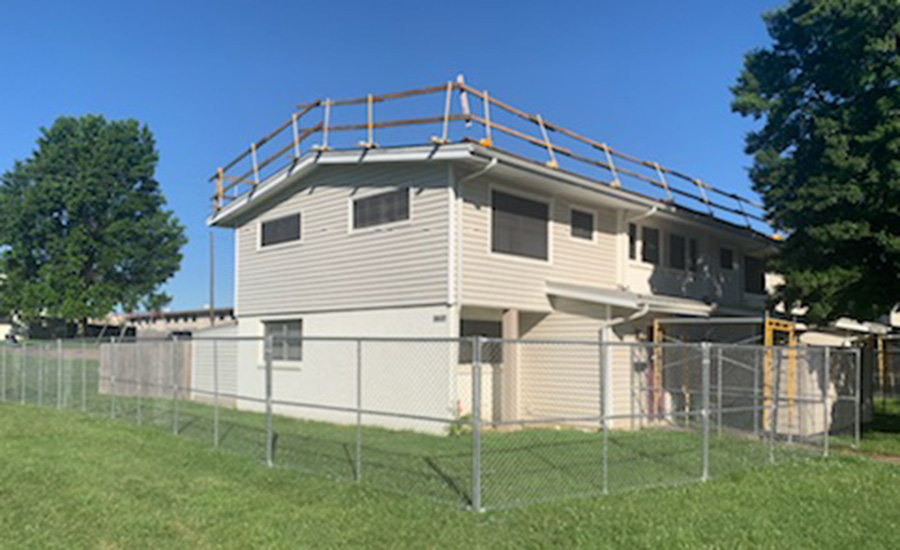 All Star uses roof perimeter protection in the form of ACRO or the Hugs Safety Rail System plus tie-offs.

All Star Contractors ensures its work with a full-time quality control manager and a program known as doForms. This program enables All Star to design a roofing inspection form to use with each job and reference state building codes. From there it’s a matter of capturing photos and video at all phases, including deck inspection, dry-in, in-progress and final inspection.

This attention to detail couples well with All Star Contractors’ simple approach to forming client relationships: Just listen to what they’re saying.

“Sounds pretty simple, but we just listen — most people want to tell their customers what they need, more than listen to what they want,” he said. “Then we offer a solution. If they agree to our recommendation, we execute in the most professional manner possible.”

The professionalism All Star Contractors brings doesn’t go unnoticed. All Star Contractors helped build a “Wounded Warrior” home in 2008 for an injured veteran, and that same year took part in the “Extreme Home Makeover” TV series to help renovate a home in Geneva, N.Y.

Still, being in a niche market is not without its challenges. Since the company works on military bases, All Star needs employees who can pass a background check before they go to job sites. Projects are time sensitive as well.

“If you have any labor issues or shortages halfway or towards the end of a project, it makes it very difficult to recover,” he said.

More issues have sprung up as well due to the pandemic. Fleming said he is running into material shortages and still struggles with having workers adjust to COVID-19 safety protocols. To overcome, he has educated clients about lead times and has implemented safety programs to prevent the spread of the virus.

Boots on the Ground

In terms of operations, staff is kept to a minimum. Aside from Fleming, there is a project manager and his wife, Tracie, manages the office. Labor is adjusted as needed, though he tends to keep around 22 workers at the ready on a regular basis.

“I believe our success comes from me as the owner being hands on. If I have a chance to relax a little and work four hours a day, I will. If I need to work 20 hours a day — these days seem more than the other — I will as well,” Fleming said. “I am able to make executive decisions on the spot for my clients. That eliminates the red tape.”

Being nimble has its advantages, but also comes with the territory. Fleming said the type of jobs he completes requires traveling to different parts of the country and moving his whole operation, but that suits his lifestyle just fine.

“I do not like sitting in an office; I do not want to spend my days emailing or video conferencing,” he said. “I do not want to lose the day-to-day operations of getting things done in the field and having a rapport with my employees from the bottom up. They need to see me picking up debris, moving material, stripping shingles from time to time, cooking them lunches, asking them about their dreams, families, and goals.”

This rapport with employees also helps when dealing with workers who don’t like going to unfamiliar parts of the country for jobs. In turn, All Star sees little turnover in its workforce.

“Being able to relate to my laborers — not all, but a majority come from backgrounds that I was raised in and understand — helps our company retain our labor force,” he said. 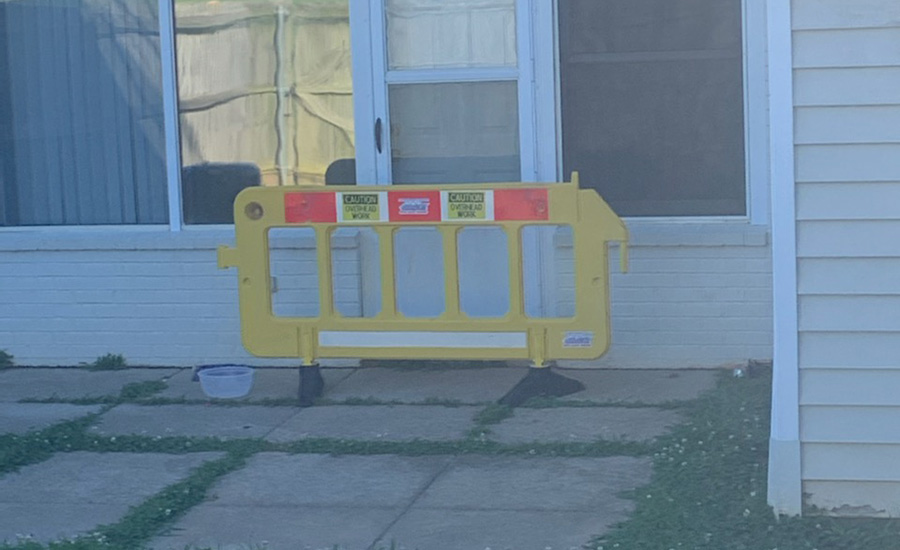 “We are required to follow GMRs (Global Minimum Requirements) that are typically held to a higher degree than OSHA,” said Fleming.

As one would expect, the military work All Star Contractors does has layers of safety checks and balances. Alongside compliance with OSHA’s fall protection training, no workers can access a second-story roof by means of a ladder. Instead, they are to use mechanical lifts or steps with handrails. All Star even uses perimeter protection in the form of ACRO or the Hugs Safety Rail System plus tie-offs.

“We are required to follow GMRs (Global Minimum Requirements) that are typically held to a higher degree than OSHA,” said Fleming.

In addition to fall safety, All Star goes through daily “Pre-Task Plans” with all employees to identify that day’s responsibilities and safety risks. When on a jobsite, workers walk through that day’s agenda, and prior to starting, perform a series of stretches to prevent pulled muscles. All of this is on top of providing first-aid kits, water, hand-cleaning stations, PPE and wellness areas for employees to cool down after being in the sun.

“We have a full time safety manager on site to ensure safety rules are being followed,” Fleming said.

It’s not all work and no play for All Star. Every Friday, employees are treated to a cooked or catered lunch as a way of saying thank you for their work.

Fleming credits Lendlease, its main client, for All Star’s emphasis on safety and quality, saying the Australia-based company doesn’t expect either to be compromised regardless of cost or time. He also turns to Beacon Building Products as his main distributor.

But in the end, it’s that Marine grit, balanced with the mindset of enjoying your work, that keeps All Stars Contractors as a top-rank contractor.

“Don’t ever think you are above anyone else working for you or that your client won’t replace your services. Have balance between work, family and personal time. We only get one shot at ‘life,’ live it to the fullest, there aren’t any guarantees,” Fleming said. “Don’t forget to slow down and reflect on how blessed we are to be able to do what we do. If you don’t feel this way, it’s time to do something else.”