NASHVILLE — As its nickname suggests, Music City has a legacy of making and breaking records in the music industry. Now it does in roofing, too.

The official number of attendees at the 2019 International Roofing Expo® was 14,295, according to officials with Informa, the global exhibitions company that puts the show together. That shattered the previous show attendance record of 11,273 set in Las Vegas in 2017, and was significantly higher than the 10,076 that made it to New Orleans last year.

Despite a smaller venue at the Music City Center, this year’s show also surpassed prior IRE’s in terms of industry participation (502 exhibitors) over 152,000 square feet of show floor space, and in educational opportunities (44 instructional sessions). 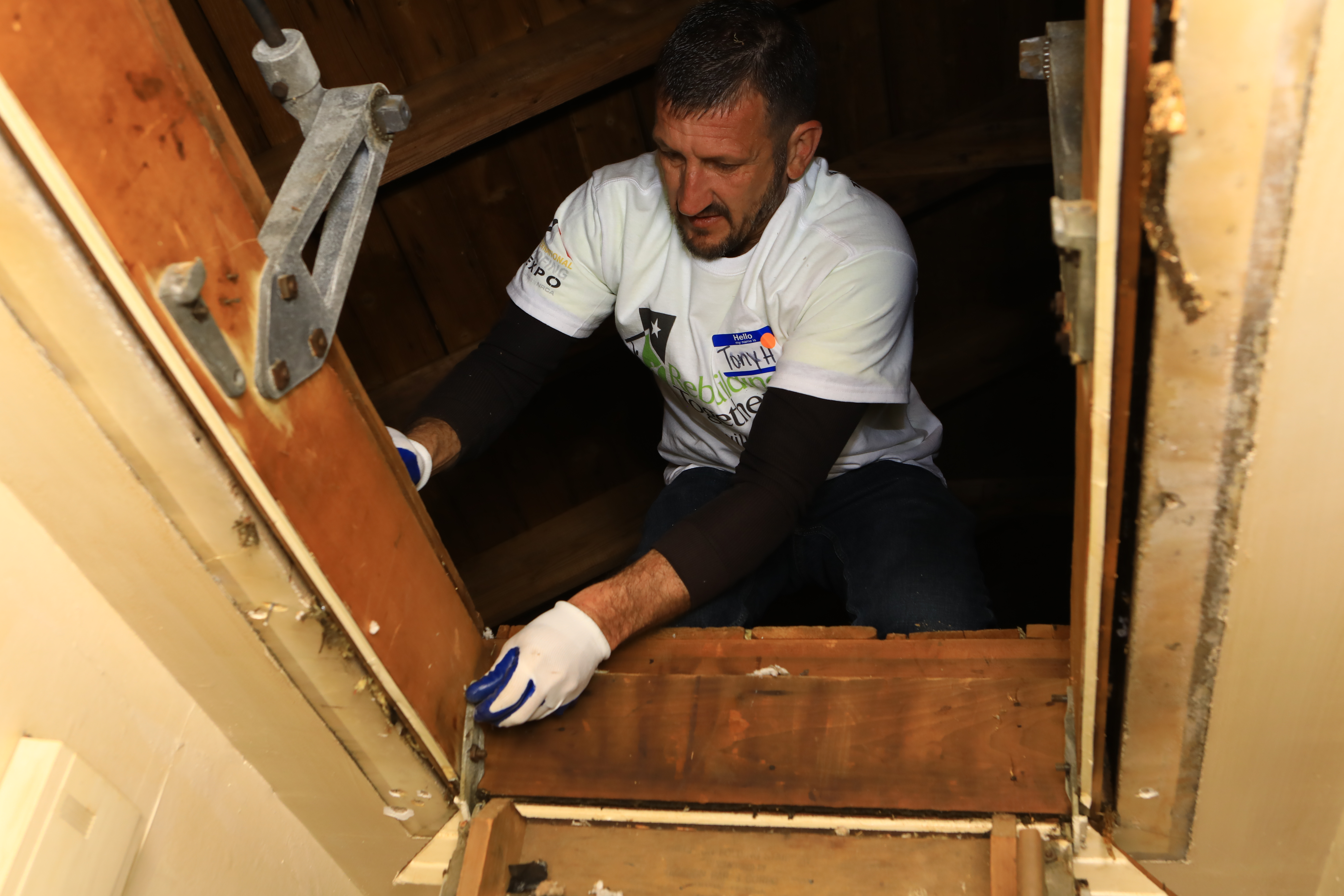 Just as in each of the past 10 years, the festivities began with a lot of hard work performed by dozens of volunteers that participated in the annual IRE Community Service Day. This year, more than 70 volunteers from all facets of the roofing industry responded to the call to help the IRE host city by donating their time, expertise and sheer muscle to give back.

The IRE partnered with Rebuilding Together Nashville, a nonprofit, volunteer-based program that repairs and rehabilitates homes and nonprofit community facilities. This year, the group targeted the Cleveland Park neighborhood of East Nashville, located just across the Cumberland River from downtown.

Seventy-five volunteers registered to work together to help rebuild the homes of five homeowners unable financially to make costly but necessary home improvements. They also work on a local community center used by the Boys and Girls Club of Middle Tennessee. Since 2015, the average daily attendance at the club ballooned from 12 children to 145 in school year and 220 in the summer last, said Herb Myers, unit director of the Cleveland Park Boys & Girls Club.

The repairs not only brought new life and functionality to the long-time community center built in the 1960s, but will help keep long-time homeowners in the rapidly-changing neighborhood, organizers said.

Homeowner Ivy McGee said she was ecstatic to watch the roofing industry respond in such a big way to help her stay.

“I feel so blessed,” said the retired grandmother of seven. “This is my first house and it means everything to me. I can’t explain it. I pray these changes will help keep me here.”

“Being an international company, it’s important for us to volunteer and give back to the community,” said Bill Godfrey, of Ottawa, Canada-based Godfrey Roofing as he moved up and down a ladder to remove insulation in one home. “After six or seven hours you feel pretty good about everything.” 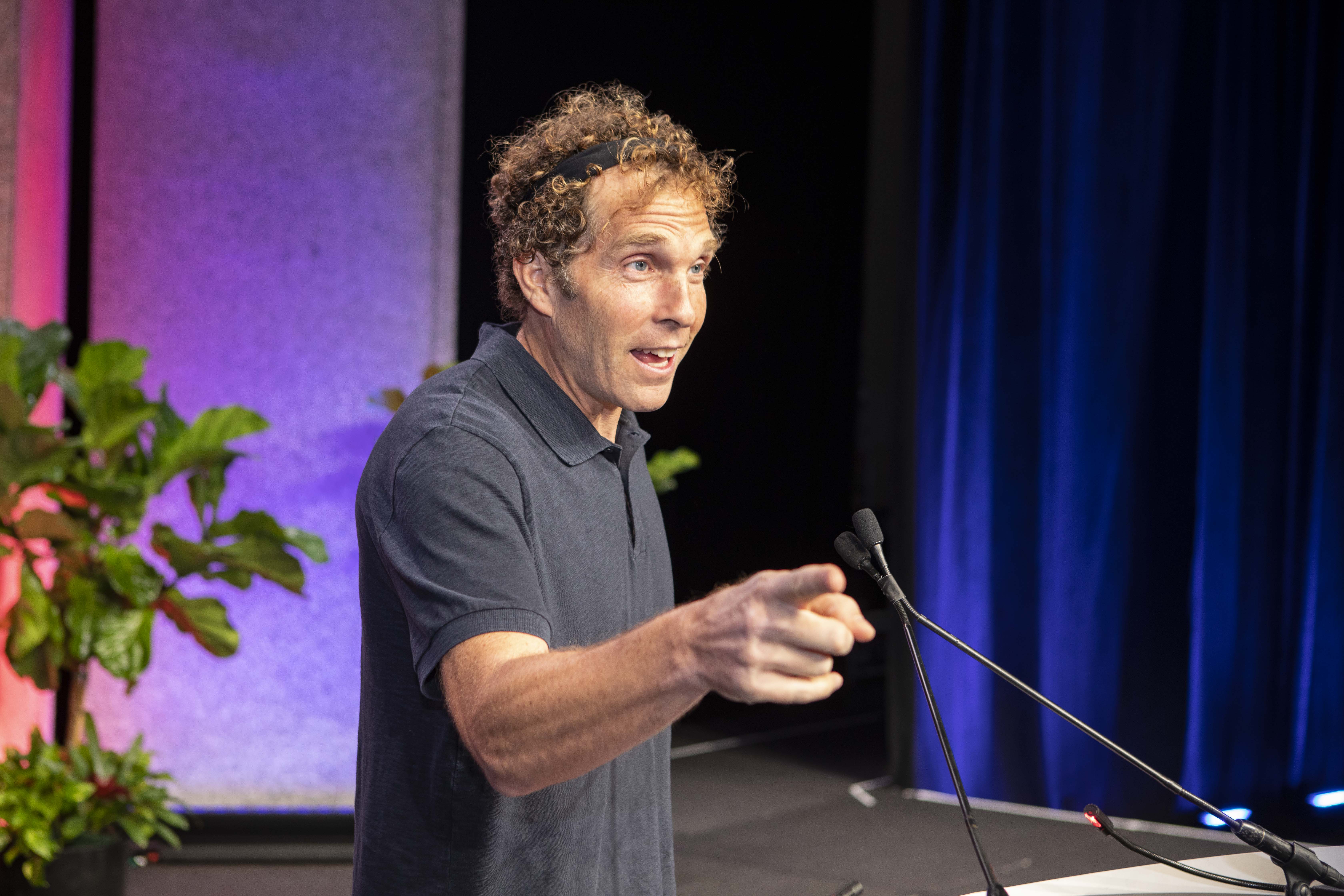 The show officially kicked off with the traditional keynote address, sponsored by Malarkey Building Products, presented by a very non-traditional business mogul.

Intrepid entrepreneur Jesse Itzler captivated the audience of roughly 2,000 with his unconventional business journey, which started in his 20s by finagling his way into a record exec’s office and ultimately landed a record deal.

As he told his story from starting out as a burgeoning white rapper to jet and beverage mogul, two strong themes emerged: it’s important to have a differentiator, something that uniquely sets you apart from the competition; and not succumbing to the fear and pressure sparked by the unknown. He calls it the “tap on the shoulder.”

“Self-doubt is the number one enemy of success,” he said. “As a defense mechanism, our brain taps us on the shoulder and says STOP! It doesn’t want us to be embarrassed, humiliated or in pain. When you ignore this and keep going, that’s the difference between heroic success and failure.”

Itzler, now 50, said he’s learned along the way that discipline is key and staying true to the most important things in your life will help pave the way to where you want to go. Figuring out how to get there is difficult without a personal mission statement, he said. It’s a playbook to outline your “non-negotiables” in life, and will help establish a story line that will help build authenticity and credibility — two critical factors to any business.

Credibility of the entire roofing industry was the focus of remarks from Reid Ribble, CEO of the National Roofing Contractor’s Association (NRCA).

As he did from the stage of Best of Success in Dallas last year, Ribble urged roofing contractors to strive to improve the industry’s perception by first changing how they look at themselves.

“You protect the most important things you value in their lives,” he said prior to the keynote address. “You’re on the front line in protecting the entire country from the elements outside.”

He said he aimed to have 1,000 roofing industry stakeholders participate in Roofing Day II on April 3-4 in Washington, D.C., to help improve perceptions on Capitol Hill and to advocate for critical issues like immigration and workforce initiatives.

He also laid out the process and purpose behind the NRCA’s recently-launched ProCertification program — to help standardize training and education for roofing installers across the country.

“We’re embarking on a new journey and it will change the entire landscape. This is the type of move we need to make,” he said. 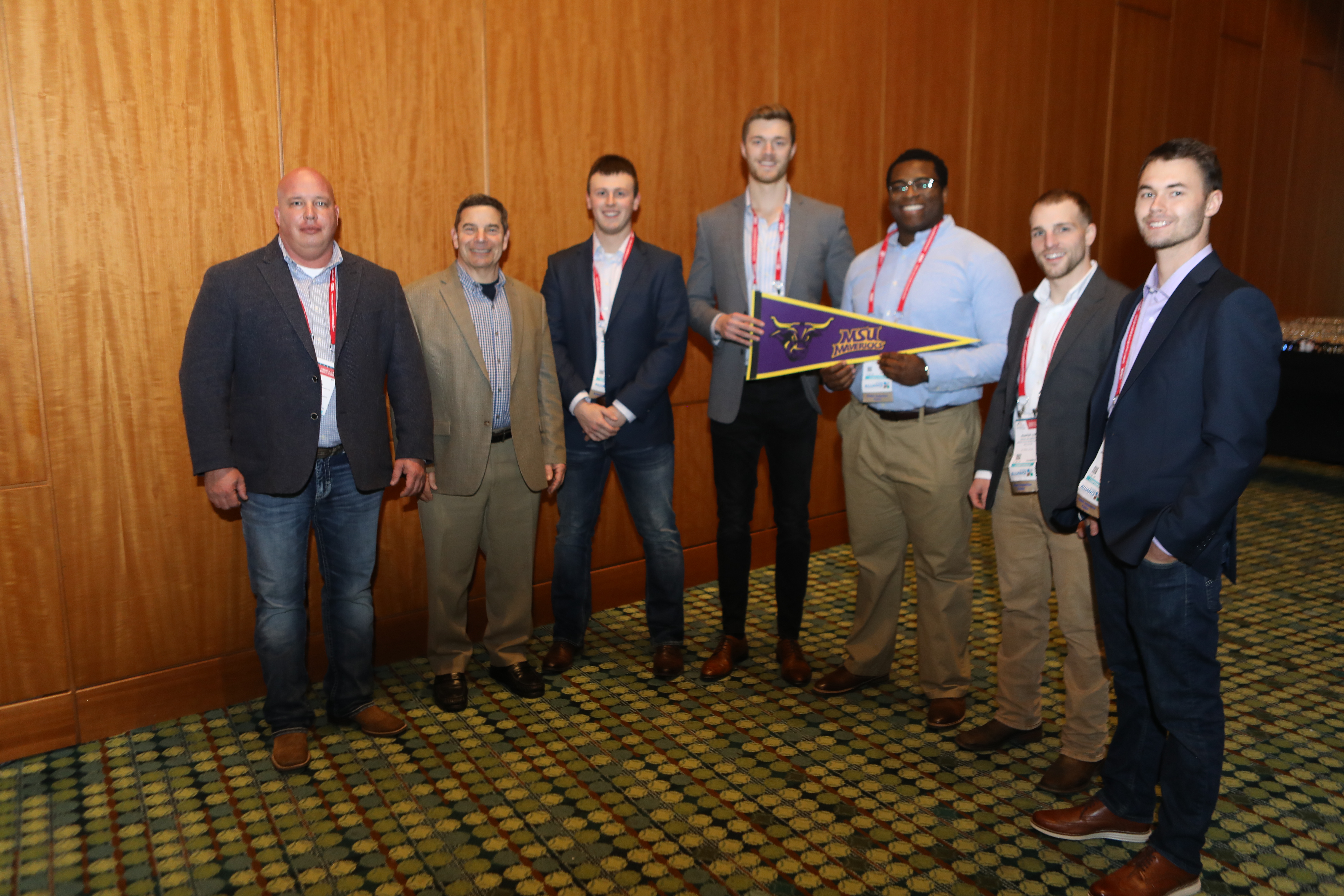 The NRCA presented its annual awards during the organization’s 132nd annual convention held in conjunction with IRE.

The J.A. Piper Award is the roofing industry’s most prestigious honor and recognizes roofing professionals who have devoted constant, outstanding service to the association and roofing industry.

Hardy Pierce, the first woman to earn the honor, serves on NRCA’s board of directors and is a member of NRCA’s Residential Contractor Committee, Roofing Day Task Force and Technical Operations Committee. She’s been in the roofing industry for 38 years also has served in leadership positions in several groups and associations.

She told the large audience that she was “speechless” at having been named this year’s recipient.

“Those of you who know me know I believe we have a very kind industry, with people who show up every day and solve problems, and it has only been a joy to be a part of it,” Hardy Pierce said when accepting the award. “Thank you very much, and I am beyond honored to receive this award from contractors who I respect so much.”

Other industry awards from the event included:

CNA/NRCA Community Involvement Award to Showalter Roofing Service Inc. of Naperville, Ill. for creation of its nonprofit called A Roof Over Your Head. The nonprofit assists homeowners in need with various household repairs.

Charlie Raymond Award was given to GAF. The award annually honors a member for extraordinary efforts to recruit new members to NRCA.

The Roofing Alliance also doled out several awards during the ceremony, including the winner of the 2018-19 Construction Management Student Competition — Minnesota State University – Mankato.

Teams were tasked with submitting a mock qualified bid package for installing a new roofing system for the Hilton Franklin Cool Springs Hotel in Franklin, Tenn. Judges reviewed written proposals submitted in December and finalists were required to present a 15-minute oral presentation in Nashville.

The MSU-Mankato team was a first-time participant in the event and will receive $5,000 in scholarships. Second place was awarded to Colorado State University, which will receive $2,500.

Immediately after the teams made their morning presentations, one of the judges — Chris Baxter, vice president and senior estimator for Rackley Roofing Co. Inc. of Carthage, Tenn. — said the presentations were “amazing” and that he was “very impressed.” Rackley Roofing actually did the project.

“(Presenters) were almost accurate to a fault in identifying the primary hazards on the job,” Baxter told RC. “They were maybe a little out of sequence in most cases, but there was one group that nailed the sequence.”

After receiving the award, MSU-Mankato Team Captain Chase Olson said he was “surprised and not surprised at the same time” at his team’s victory.

“We have a team full of actual experience,” he said, noting team members have worked in the roofing industry in various capacities, such as internships. Olson said the team estimated putting a total of about 44 hours into preparing its mock bid for the hotel.

Other awards handed out by the alliance included:

Best of the Best was awarded to Brandon Reese, a foreman with Korellis Roofing Inc., Hammond, Ind. In addition to his role with his company, Reese served three deployments and was awarded a number of medals. He works with Helmets to Hardhats, a national nonprofit organization that connects National Guard, Reserve and retired and transitioning active-duty members with opportunities in the construction industry.

A Gold Circle Award in Safety Preparedness and Performance to Nations Roof of Villa Park, Ill. for its work on the Rolls Royce North American Headquarters project in Indianapolis.

On Monday, Feb. 11, Sika Sarnafil awarded winners of its contractor project of the year in several categories. Winners were recognized during a dinner ceremony held in the ballroom of Nashville’s historic The Standard at the Smith House.

“Congratulations to the winners of the 2018 Contractor Project of the Year competition,” said Brian Whelan, executive vice president, Sika Sarnafil. “Each entry is judged on project complexity, design uniqueness, craftsmanship and creative problem solving. We salute the winners for their dedication to the roofing industry and installation excellence.”

The categories and winners were:

The Bronze Award went to Professional Roofing and Solar for the Rancho Sante Fe Storybook House. After the original wood shake roof was damaged by termites and rot, a new asphalt shingle roof was installed on this massive, 11,500-square-foot home to preserve the original design. 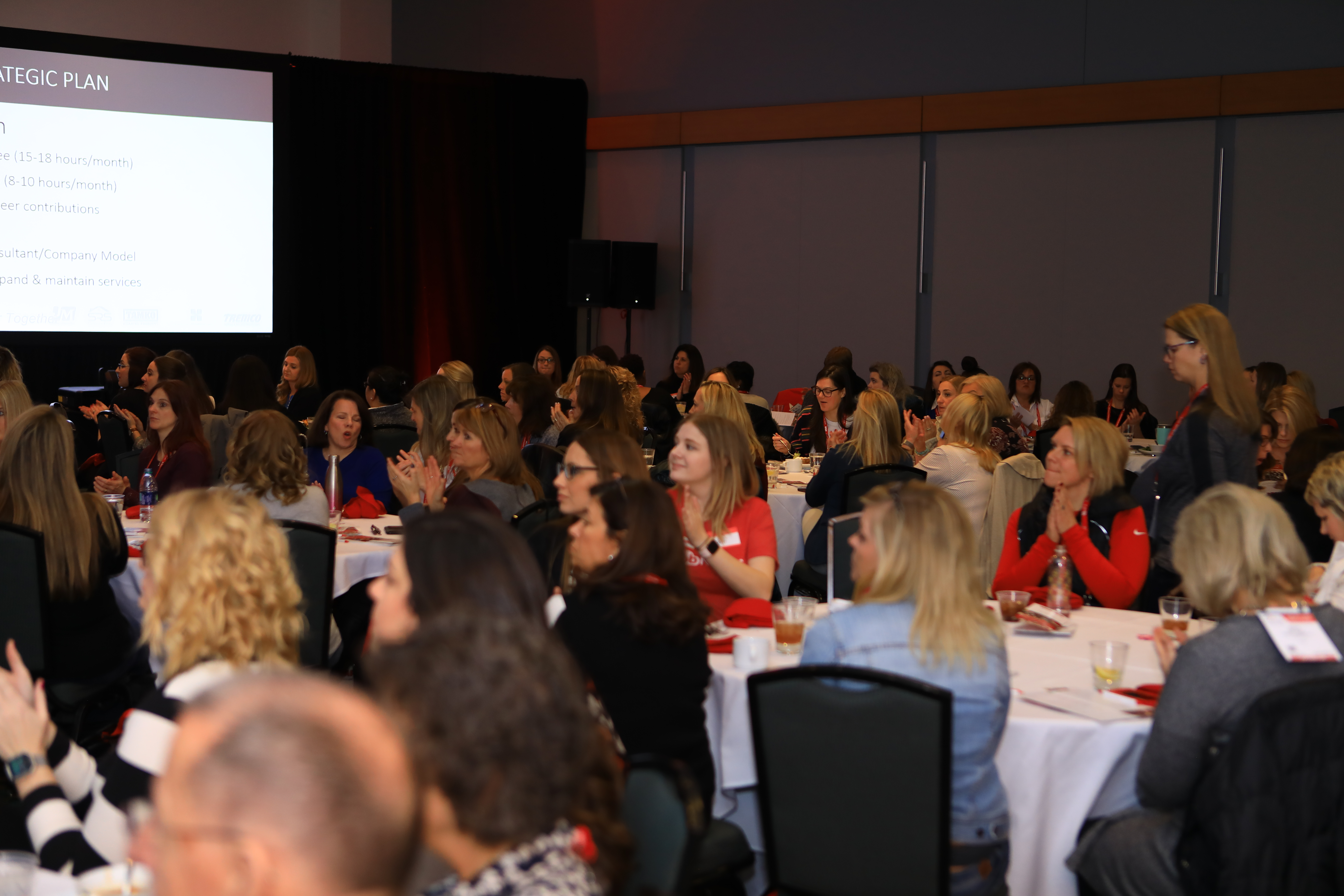 While the show floor and seminars held during IRE were enough to keep attendees plenty busy, other happenings and events offered even more.

The organization also announced the recipients of its first-ever NWIR Day scholarships.

The program is designed to encourage first-time attendees who work for contractors to experience the benefits of professional development in the roofing industry; attendance at these events can influence one’s career trajectory and benefit not just the attendee but her company and employer.

The night before the show kicked off, NWIR partnered with ROOFPac to present the Country Music Hall of Fame and Museum Songwriter Extravaganza. Top songwriters performed and wrote a song on the spot (with help from audience members). The fundraising event for ROOFPac, the political action arm of the NRCA, also included a live auction.

GAF hosted J.J. Watt, of the NFL’s Houston Texans. Watt arrived at the GAF booth just before 4 p.m. though the crowd started lining up well before then for a chance to meet one of the National Football League’s biggest stars.

Sam Smith, from Ernie Smith & Sons Roofing, which serves the Greater Houston area, was the first in line to meet Watt.

“I’m from Texas and I’m Houston Texans supporter,” said Smith. “I just think J.J. Watt is the man to meet.”

Andrew Dietderich is Managing Editor of Roofing Contractor. Reach him at 248-244-6498 or dietdericha@bnpmedia.com.

Art Aisner is editor of Roofing Contractor. He can be reached at 248-244-6497 or aisnera@bnpmedia.com.

Andrew Dietderich is the managing editor of Roofing Contractor and can be reached at dietdericha@bnpmedia.com.