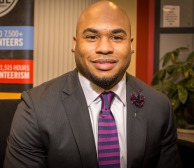 NEWTON, Mass. — The metal construction industry’s largest international event for metal construction products, technologies and solutions plans to give back to the local community during its annual tradeshow and conference taking place Oct. 10-12 at the Charlotte Convention Center.

METALCON has partnered with the Steve Smith Family Foundation, a non-profit organization dedicated to helping families impacted by domestic violence and to promoting child health and wellness.

METALCON Presenter Steve Smith Sr., a 16-year NFL veteran and former five-time pro bowl, three-time all-pro receiver for the Carolina Panthers and Baltimore Ravens, along with his wife, Angie, created the foundation in 2013. They set out to create an organization that would allow their entire family, including their four children, to participate in giving back to the community.

As a child, Smith was greatly affected by domestic violence.  From struggles in his personal life to overcoming injuries and facing adversities on and off the playing field, sports became his escape and allowed him to start a new chapter in his life. Even with his new NFL fame and fortune, he never forgot where he came from.

Through the foundation, Smith is able to provide hope and inspiration to families by offering events such as summer camps, golf, bowling, 5K fundraisers and other programs that promote family health and wellness. Charlotte area families facing personal and family struggles and challenges can access medical and counseling services at the Smith Family Wellness Center, established together with Project 658 in 2016.

Each year, METALCON gives back to the local community where the show takes place.  Last year, thousands of dollars were raised during the Las Vegas show to benefit the America’s Fund, which provides urgently needed resources and financial support to injured and critically ill members of the U.S. Armed Forces and their families.  This year’s giving back program will raise money for necessary youth programs in the Charlotte area.

Contributions to the Steve Smith Family Foundation can be made before, during and after the show online at www.metalcon.com or at The Deck, Booth #1005, in METALCON’s exhibit hall, where members of show management will be available to meet supporters.

"We are happy to support our keynote speaker’s highly regarded foundation," said METALCON Show Director Claire Kilcoyne. “Steve has had an incredible life journey and has had to overcome many obstacles along the way.  We hope the funds raised by our generous show audience will help other children who are facing adversity.”