IRE 2018 New Orleans: The Big Show in the Big Easy

The International Roofing Expo (IRE) made a triumphant return to New Orleans last month, drawing thousands of roofing contractors, vendors, consultants and industry innovators from across the globe.

Preliminary attendance numbers exceeded 10,000 attendees, which represents a significant increase over the last time the IRE visited the Big Easy in 2015. Also notable this year was a large number of first-time registrants at the show, officials said.

“We’ve once-again had a record-breaking year,” said Show Director Tracy Garcia, of Informa Exhibitions, prior to the Keynote event. Though overall attendance was a tad lighter than last year’s record-shattering 11,200 in Las Vegas, she said the 2018 show measured up in other ways.

“With 457 exhibiting companies, 137,400 net square feet and countless networking opportunities … the International Roofing Expo is a slam dunk,” she said.

The NBA Hall of Famer and former business executive got personal during his speech before hundreds of roofing contractors and industry professionals gathered in the Great Hall of the Ernest N. Morial Convention Center. Admitting that he rarely talked publicly about his personal experiences in great detail despite more than five decades as a recognizable star athlete, Erving opened up about life growing up with a single mother and two siblings in the Parkside Gardens housing projects of Long Island, New York.

Leaving the podium to take a seat before the captivated audience, he spoke for nearly 90 minutes, offering a rare glimpse into his personal story of perseverance and determination. The 11-time NBA all-star and former playoff and league most valuable player award winner also touched on how he maintained proper perspective while rising from a promising high school and college phenom into one of the most respected and influential players of the last century.

He credited his mother for instilling the importance of hard work and being accountable for your decisions, good and bad. He also said that at a young age he adopted a mindset that captured the importance of always looking forward, not back. And it still rings true for him today.

Erving also told the crowd he was grateful to hear roofing contractors he encountered speak about taking charge and working to improve the roofing industry for coming generations.

Another celebrity that left a mark on attendees on the show floor was television personality and skilled-trades advocate Mike Rowe. The former host of the Discovery Channel’s “Dirty Jobs” series drew a large crowd to the GAF booth toward the end of the show’s second day, where he talked about America’s workforce challenges and how he’s help companies find success by hiring U.S. military veterans. 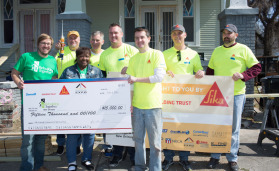 Check out our photo gallery from the IRE 2018 Show Floor!

He vividly remembered what he called a turning point in the show when he made the realization that returning servicemen and women provided a talented pool of skilled and highly-motivated job candidates to hungry business owners in the trades.

“In the end, we’re really just talking about people that want to get back into society and learn a skill that’s in demand and start contributing again,” he explained. “And that’s when we started to use “Dirty Jobs” in a slightly different way to highlight the armed forces.”

He encouraged the industry to continue building an on-ramp for veterans to get into roofing and help shrink the nation’s skills gap while also fulfilling a promise to the soldiers and their families that sacrifice so much.

He said today’s workforce, in general, lacks what he called the ‘soft skills’ that often make or break an employee’s tenure with a company.

“What you need are people that show up early, stay late, who are willing to learn a skill that’s truly in demand, tuck their shirt in, …maybe take a clean drug test,” Rowe said. “For our men and women coming back, these things are not issues. Those boxes are checked and they’re ready for work.”

While some exhibitor booths highlighted special guests and pushed gimmicky takeaways, others were all about the products.

Another round of new, innovative and problem-solving products were on display in the Product Showcase at the start of the show. Within a few hours of the show opening, a panel of judges comprised of industry experts reviewed the products they could see, try and compare in a new unique layout that offered a time-saving overview of what’s new on the show floor. They then separated the items into three separate categories and chose the best on a criteria that included innovation, productivity and cost-effectiveness. Unlike last year, awards were only issued for first place winners. The 2018 winning products were:

“This is really an honor,” said Eric Velliquette, vice president of sales and marketing for Lakeside Construction Fasteners. “We always look forward to exhibiting our new and innovative products at this show and introducing them to the metal roofing market.”

Officials with Carlisle Construction Materials said they hoped their new RapidLock product would make an impact at the show and were very pleased with the industry recognition.

“Everyone here is worried about labor,” said Mike DuCharme, vice president of marketing for Carlisle Construction Materials. “The only thing holding every roofer back that it’s in this hall now is the bandwidth to get jobs done this year and this opens up that bandwidth.”

In addition to products, roofing contractors came to New Orleans ready to learn. There were 44 separate educational sessions planned for the show floor, and multiple manufacturers hosted live product demonstrations and learning discussions at their booths. Many of the offerings were standing-room only.

“There was a tremendous desire to learn this year,” said Paul Bromfield, GAF’s chief marketing officer. “I think folks were interesting in all sorts of things, but one I’d particularly highlight was an increasing interest in solar solutions. Others were exploring liquid applied or other technologies to broaden their knowledge base of commercial roofing.”

Technology remained another big component of the show, running the gamut of advanced roofing products, and apps and software programs to enhance the in-home selling experience.

Since 2010, IRE attendees have made a conscious effort to give back to the communities of the show’s host city. The annual tradition that originally started in New Orleans to help recover from the effects of Hurricane Katrina returned in 2018 and made a significant impact on three separate homes.

Check out our photo gallery from Community Service Day at IRE 2018!

The group of more than 60 IRE attendees of all ages made the 25-minute trek east of downtown where they split up into smaller teams at three different worksites referred by Rebuilding Together New Orleans, a non-profit, volunteer-based program that repairs and rehabilitates homes and non-profit community facilities.

The first was in the city’s 7th Ward to the home of Betty Johnson. The 69-year-old retired state employee could not keep up with the required repairs on the home she inherited from her parents. Volunteers painted, added handrails to the porch and helped with landscaping. A new roof will be installed as part of the project.

Another group of IRE volunteers visited the Gentilly neighborhood, which was also ravaged by Katrina’s intense winds and powerful rainfall. Long-time residents Charles and Cynthia Heisser, ages 85 and 83 respectively, were born and raised in New Orleans and moved into their single-story home in 1974. Major repairs were necessary for them to reclaim the home once the floodwaters subsided. The structure was lifted, the foundation repaired, and the exterior was replaced and reframed. However, unscrupulous contractors, costly repairs, and an unfair distribution of rebuilding funds left the Heissers short of the finish line.

They used what financial savings they had to convert at 12-ft.x24-ft. garage behind their home into a living space while their original house sat unfinished. Until now.

“This is a miracle for us,” Cynthia said as she watched strangers install sheet rock panels in what will be her future kitchen. “We didn’t want to leave the property and this really means the world to me. I can’t believe it and it feels like I’m in a dream.”