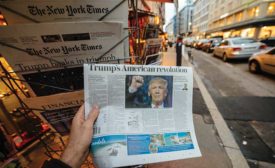 Trump’s new labor chief will have the authority to undo several measures implemented since 2008.
Richard Alaniz
No Comments
President Donald Trump announced his choice for chief of the U.S. Dept. of Labor (DOL), and while the nominee's name may be relatively unknown, a look at Andrew Puzder's ideology reveals that his nomination isn't much of a surprise.
Read More
Subscribe For Free!
More Videos

Roofing Industry Reacts to the 2020 Election