In its nearly 40 years of doing business, Advanced Roofing Inc. has gone from one pickup truck to a full-service commercial roofing and solar contractor with 500-plus employees and annual revenue numbers hitting $160 million.

Advanced Roofing’s success can be contributed to a number of factors, including strategic acquisitions, diversification and a hurricane-prone market, but it all boils down to doing quality work and sticking to their word.

“Advanced Roofing takes great pride in the success of our company and employees, and keeping our customers satisfied is at the heart of all we do,” said Rob Kornahrens, founder and CEO.

Kornahrens’ exposure to roofing happened in high school and throughout college as he worked at Triple-M Roofing on Long Island, N.Y. After earning a degree in business administration from the University of Arizona, he opened a branch office for Triple-M in Atlanta, Ga., and after several years, the company moved him to South Florida in 1982.

As grateful as he was to Triple-M, he wanted to venture out on his own. In 1983, he borrowed $15,000 from his father, a manufacturer of airplane refueling equipment, to start Advanced Roofing.

The roofing company mainly serves commercial markets, focusing on reroofing, waterproofing, repairs and maintenance, and has since expanded into other avenues. Advanced Roofing says it obtains roughly 90% of its business from referral work, something it can attribute to its slogan, “committed to quality.”

To ensure its slogan isn’t an empty statement, Advanced Roofing has a full-time quality control division to inspect all jobsites and train employees on how to properly install everything from BUR and modified bitumen to single-ply membrane, coatings and metal roofing. Independent inspections are also performed on most jobsites by city officials, FM Global Insurance, manufacturers, clients and consultants alike.

For its dedication to quality, Advanced Roofing has received a slew of accolades, including projects recognized by the Asphalt Roofing Manufacturers Association and Florida Roofing and Sheet Metal Association (FRSA), a Construction Association of South Florida Craftsmanship Award in 2021, and the GAF President’s Club award.

Quality work is paramount when servicing markets affected by hurricanes. The company has been around for multiple storms, starting with Hurricane Hugo in 1989. This was a milestone for Advanced Roofing, having acquired a contract for St. Thomas to install blue tarps on homes. Years later, Hurricane Andrew proved to be one of the stepping stones for Advanced Roofing to establish itself in the market.

Although hurricanes generate plenty of work, Advanced Roofing doesn’t depend on them to grow. The company diversified into air conditioning in 1994 by purchasing a small company. In 2015, it acquired Roth Bros. of Florida, a Tampa-based roofing firm, and a year later, acquired Roof System Services based out of Pompano Beach. 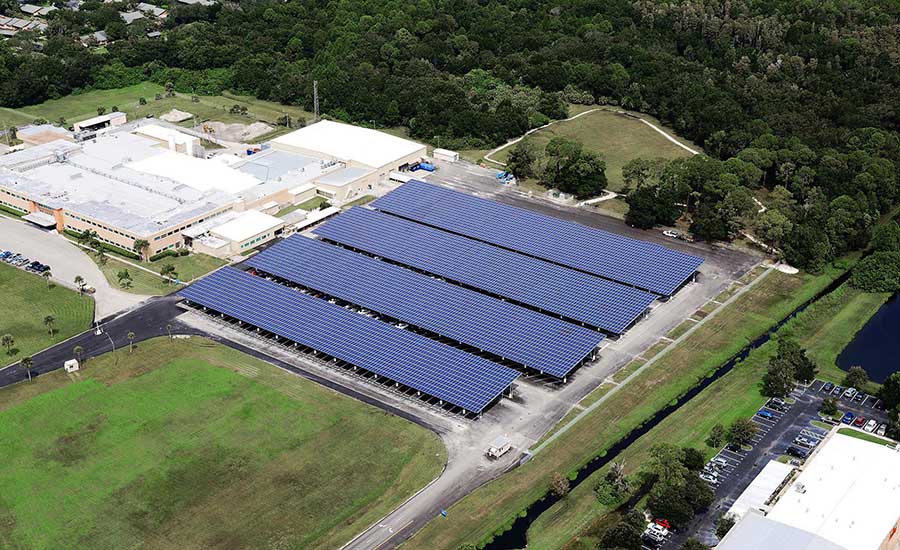 A Bright Future in Solar

Naturally, being located in the Sunshine State means plenty of opportunity for solar installations. Advanced Roofing became a model of adaptability in Florida by also diversifying into the solar market.

Established in 2007 under Advanced Roofing, Advanced Green Technologies has installed more than 250-plus megawatts of solar, including solar roofs, farms and carports. Clients have ranged from J.J. Taylor Distributing to Miami Gardens City Hall and the U.S. Navy. As of 2020, it was building more than $12 million of solar contracts in Tampa alone.

The company’s prowess in the solar sector was on full display following Hurricane Ian. After the Category 4 storm blew through, they surveyed the damage its customers endured. When checking on solar installations, Advanced Green Technologies only found minor damage likely caused by flying debris.

“We performed very well with the systems that were in the area,” said Clint Sockman, vice president of sales and business development and vice president of Advanced Green Technologies. “We’re doing some preventative maintenance on them just to make sure things that didn’t fail hadn’t come loose.”

In one instance, the company designed and replaced a solar array for J.J. Taylor Distributing that was blown off a roof four years ago by a Category 1 hurricane. After Ian came through, about 95% of the new array remained intact.

“If you go through the history with this property, the whole thing was lost in a lower event, but through our engineering, design, our manufacturing partners, we were able to build one that withstood the test of a large storm,” Sockman said. “To really see it play out in a real-world event, I’m not gonna say we were anxious … but at the end of the day, we’re still able to deliver power out of this system to the building.”

In addition to being the CEO of Advanced Roofing, Kornahrens is CEO of Power Panel, a company revolutionizing solar technology. It produces the company’s namesake, Power Panel, which combines PV electrical production with solar thermal capture, meaning the module can produce solar hot water and low-cost electricity.

“We capture 75% of the sun because we're heating water and making electricity where PV captures maybe 25%. So it is twice the amount of carbon offset per square foot of our panel,” he said. 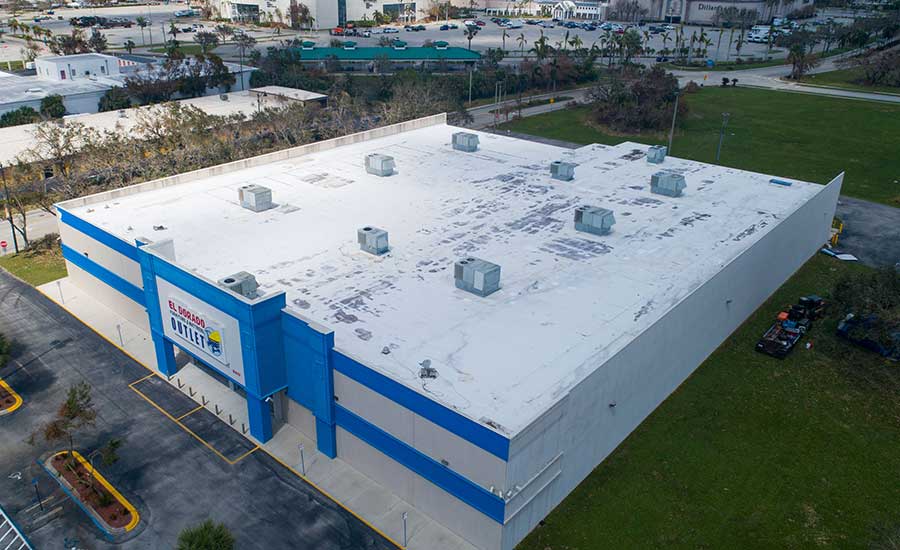 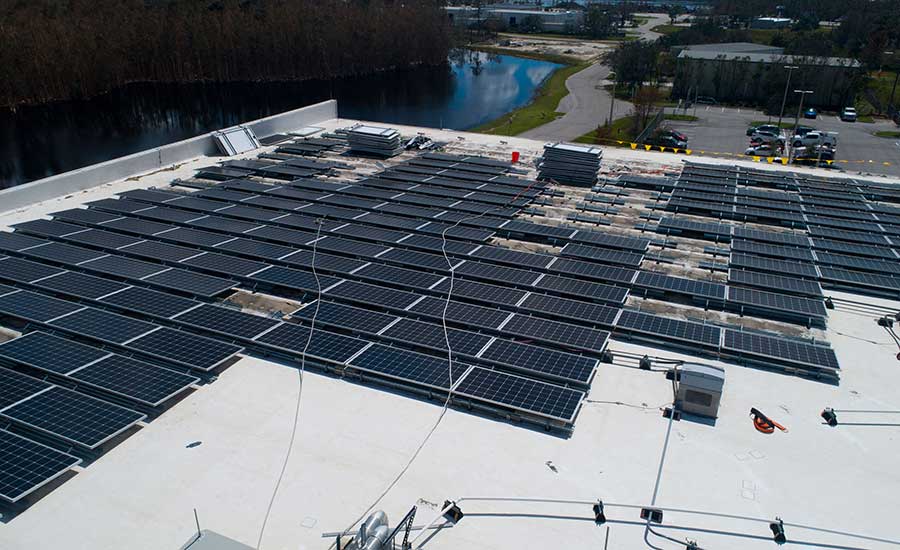 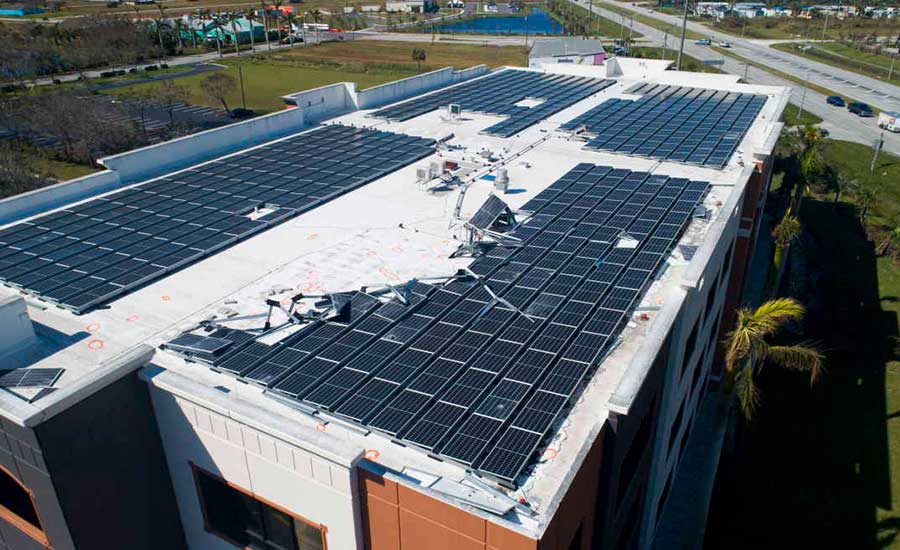 Amid the labor shortages, Advanced Roofing hired is 500th employee in November 2019. Kornahrens said the company reaches out to non-traditional talent pools, including veterans, women, and through high school and college career counselors. Advanced Roofing has also been a vocal advocate for regulatory and legal immigration reform.

“We as an industry need to work on immigration reform. It does not matter what side you are on,” said Kornahrens. “The elephant in the room is how to get illegal people to become legal citizens with a fair system.”

Along with bringing legal immigrants to help ease the workforce shortage, Advanced Roofing is a founding member of the Roofing Apprenticeship Program in South Florida with American Builders and Contractors Association. The three-year, state-accredited program has students committed to earning 144 credit hours.

Those employees it does hire enjoy multiple benefits like health, dental, vision, retirement savings, PTO, holiday gifts and quarterly events. A culture of teamwork is built through fun events like boat cruises, indoor soccer and bowling.

Safety is paramount as well. Its full-time safety division has helped establish a program leading to a low EMR of 0.63. Advanced Roofing’s safety program promotes high morale and enables the company to complete jobs on time and on budget.

Supply and material issues are making responding to hurricanes tougher. In the short term, supply shortages have limited the company’s potential revenue, and in the long term, has created a large backlog of projects. However, communication with both its partners and customers has been a key to managing expectations.

Advanced Roofing also leans on support from the multitude of associations it belongs to, including the National Roofing Contractors Association, FRSA, and Roof Connect, the latter of which Kornahrens chairs.

“These associations are important to grow our knowledge by interacting with other contractors and benchmarking on best practices,” said Kornahrens.