Tech and Teamwork: 2022 Commercial Contractor of the Year Rackley Roofing

In a 30-second video released last year, Rackley Roofing Company encapsulates its willingness to think outside the box. In it, employees share what people said couldn’t be done.

“They said I wouldn’t make it without a college degree,” says Curtis Sutton, president of Rackley Roofing.

He’s followed by Michelle Boykin, chief operating officer, who says, “They said only a man could be a roofing executive.” The list goes on as more employees appear on screen, defying the nay-sayers: a former addict who hasn’t relapsed; an amputee who still has a career in roofing; an ex-convict who was given a second chance; a single mom who supports her family with her roofing career.

The video ends with Boykin asking and answering a question: “Want to change the world? Change it, one roof at a time.”

Rackley Roofing is doing just that. It has set a high bar for other commercial contractors to reach through its innovations and culture that embraces inclusiveness and diversity. Continuous investment into technology, safety and training show employees they matter to the Rackley team. In return, its staff and crews deliver top-notch roofing services, earning exclusive partnerships with the likes of Mercedes-Benz of Music City, the Nashville Superspeedway and Tennessee Titans of the National Football League.

It’s all the hallmarks of a roofing contractor going above and beyond, which has earned it the title of 2022 Commercial Roofing Contractor of the Year.

“We strive not to just install quality roofs and provide the best customer service possible, we also strive to run a great company for our team by providing opportunities for dreams they’ve not yet thought of,” said Boykin. “This (award) will be a celebration for each and every team member of Rackley.” 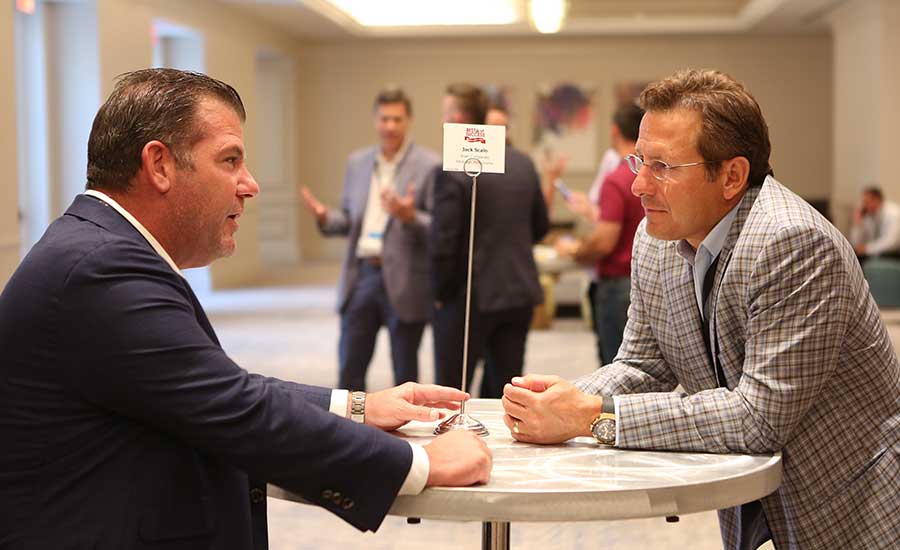 Best of Both Worlds

Rackley Roofing has a rich history stretching back to 1970s when W.R. “Bill” Rackley opened his own roofing company in Carthage, Tenn. Long-time employee David Frost bought the company in 1987, expanding it and its customer base across state lines. It earned a reputation for being one of the best commercial roofers in Tennessee.

Sutton joined in 2010, intent on purchasing the company within eight years. In doing so, he grabbed the torch and made it burn brighter by expanding service options and shifting the company culture. He used his experience as a laborer for a national roofing contractor, where he worked his way to general manager, as a basis for running Rackley. He said when starting at the bottom, he realized just how important quality employees are to a company’s success.

He takes that traditional experience and knowledge and blends it with a mission to be on the cutting edge of business and technology, differentiating Rackley from the competition. The core values leading Rackley in this mission include humble, hungry, smart, innovative, customer focused, and accountable.

These values touch every aspect of the company. Rackley encourages manufacturer inspectors to be tough, and requires superintendents to walk every job. Random audits ensure the quality of workmanship is up to snuff outside of manufacturer requirements. In one instance in 2017, Rackley agreed to eat the cost of a complete tear-off and reinstallation of a roof that passed all inspections because the owner’s rep didn’t like it.

Even its marketing goes beyond typical avenues. The roofing company created its own NASCAR team, inspired in no small part by Sutton’s passion for racing. In 2022, Rackley was the title sponsor for the second year of the Rackley Roofing 200, with the #25 Rackley WAR truck competing in the race. Efforts like these, along with its high-profile partnership with the NFL’s Tennessee Titans, have spread Rackley’s name across the nation.

“The leadership of Curtis Sutton and Michelle Boykin at Rackley Roofing demonstrates that integrity and culture can be the staples of a successful roofing company,” said Steve Little, president of KPost Roofing & Waterproofing in Texas, the 2017 Commercial Roofing Contractor of the Year. “In addition, the commitment they show to their employees, customers, and our industry should be the model that every roofing company in America follows.”

Rackley Roofing’s approach to technology is engrained in its core values — to be “innovative” — but also takes cues from its family approach.

“What we have done at Rackley is apply these family values in our business. Innovation and technology are tools,” Sutton said. “Again, you want to give your kids tools to be successful, so we give our employees technology to be successful.”

Under Sutton’s leadership, Rackley has brought industry-leading technologies to the forefront, including Rackley RoofCheck and Rackley RoofView. Rackley has implemented the use of a Virtual Reality Fall Protection Training Program, allowing everyone to experience being on a roof and learn best safety practices. The company has even adopted WT2 Plus in-ear devices that can translate speech into any language, breaking down communication barriers.

During the onset of the pandemic, Rackley Roofing was ahead of the game to adapt to lockdowns and social distancing. It was already transitioning desktop computers for laptops the year prior to the pandemic, meaning employees could work remotely.

The company hasn’t been shy about sharing its innovations. Rackley Roofing has been an influential member of the Roofing Technology Think Tank (RT3), a group of roofing professionals focused on technology solutions for the roofing industry. Rackley Roofing’s approach to technology helped Sutton earn the RT3’s inaugural Innovator of the Year Award in 2019, which nationally recognizes a roofing contractor that has contributed to the advancement of the industry.

“We selected Rackley Roofing because they embrace technology and have demonstrated that they are early adopters when it comes to implementing new innovations,” said Anna Anderson, CEO of Art Unlimited and RT3 member, in presenting the award. 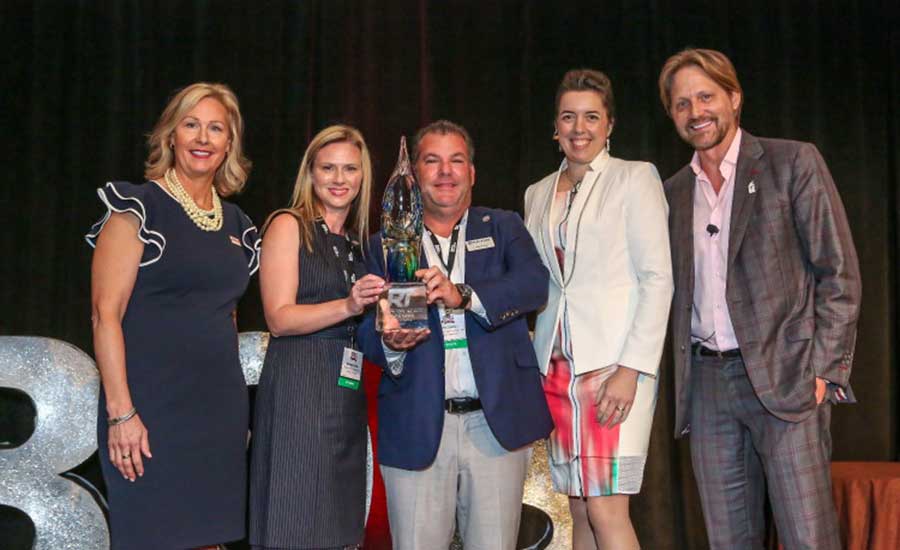 Curtis Sutton accepting the RT3 Innovator of the Year Award at the 2019 Best of Success Conference.

Taking care of employees involves more than handing them laptops and the latest software. Core values of “humble” and “customer focused” encourage keeping egos in check and striving to give customers and employees alike the best experience possible.

Internally, Rackley has an employee dedicated to bringing value to the team, which includes gift boxes to new hires. Wall of Fame and “Cheers for Peers” programs recognize team members as a way to celebrate accomplishments.

Boykin’s own journey reflects the vision Rackley Roofing has for its employees. She began as a receptionist, which evolved to a service coordinator position in 2010 and 2011, followed closely by becoming service manager. She was promoted to vice president in 2017, and in 2019, became COO. In 2020, RC named her as one of its Young Guns, celebrating the best and brightest young minds in the industry.

“The roofing industry needs a diverse work force. It takes us all: old, young, male, female, experienced, inexperienced to get the job done,” she told RC in 2020.

Diversity and inclusion happen from the top-down at Rackley and it encourages other roofing contractors to do the same. Rackley is a founding member of National Women in Roofing (NWiR), a group promoting inclusion in the industry. Boykin has held numerous positions within NWiR, including recruitment chair, chair of the NWiR Tennessee council she founded, and has served on the board of directors with the executive committee. For her efforts, she received NWiR’s WORLD Award Veteran recognition in 2021.

“We are safe above everything else,” Sutton said. “Safe before profit, safe before production. Safe, safe, safe, and our employees love it because they trust the company culture.”

Along with NWiR and the RT3, Rackley Roofing knows the importance of staying involved if it wants to lift the industry. Sutton has served as president of the Tennessee Association of Roofing Contractors as well as a director with the National Roofing Contractors Association. These efforts have not gone unnoticed nor unappreciated.

“Curtis, Michelle, and the entire team at Rackley exemplifies all the good in the roofing industry,” said Ken Kelly, president of Florida-based Kelly Roofing, the 2019 Residential Roofing Contractor of the Year.