The 2021 storm season will be a memorable one for roofing contractors, though not for the reasons one would expect.

This year became the third time in history that the storm names list has been exhausted, resulting in 21 named storms, seven of which were hurricanes and four of which were major hurricanes. But it wasn’t necessarily the amount of storms that will make 2021 stand out in the minds of contractors – it’s the lack of supplies needed to recover from them.

“Supply shortages are impossible to comprehend,” said CMR Construction & Roofing CEO Steven Soule. “We’ve never seen anything like this before, and it is so difficult to repair the storm damaged properties when you don’t have the materials needed.”

Roofing contractors around the country felt the same pain, whether it was a lack of supplies or major price increases. With locations all over the U.S., CMR Construction experienced shortages in practically every market, not just those hit by hurricane-force storms.

“Overall, 2021 seemed to be much less active than 2020,” Soule said. “That said, Hurricane Ida was a force to be reckoned with, and seemed to affect a much larger population than the storms that happened in 2020.  So, we are much busier this year than we were at this time last year.” 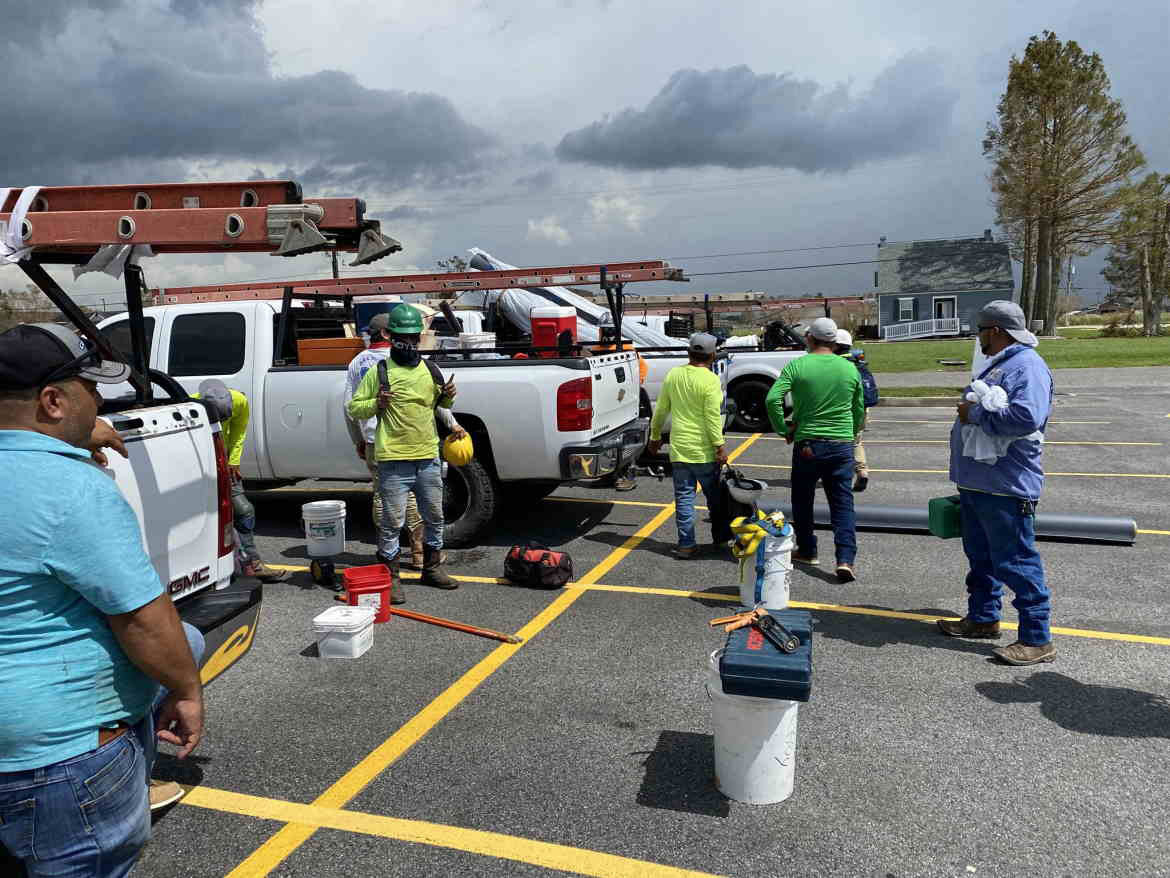 The supply shortage is chalked up to a more metaphorical storm — a combination of cascading events that led to shortages in everything from lumber to fasteners. It began with the COVID-19 pandemic causing manufacturers to shut down in March 2020. However, demand for roofing materials increased significantly with more people at home.

Ironically, the supply shortage affecting contractors during the storm season was caused in large part by natural disasters. The historic ice storms in Texas shut down production for nearly a month. Following this, Hurricane Ida devastated all in its path, resulting in $64 billion in damages, $18 billion of which was in Louisiana, and shutting down nearly all Gulf Coast oil production, which is needed to create many roofing products. The Asphalt Roofing Manufacturers Association’s third quarter shipping report showed double-digit declines in asphalt products, such as shingles dropping by 10.2%.

To make matters worse, the country experienced a record-setting freight ship backup on the coast of California that began in August, resulting in a supply disruption crisis unlike any the industry has experienced.

“It does appear that roofing seems to be impacted more greatly by the supply challenges than some of the other vertical markets or construction areas that we participate in," said Brian Whelan, executive vice president of SIKA North America, during a National Roofing Contractors Association (NRCA) telephone town hall. “I think a big part of that is we make, and you folks install, a complete roof system — so it’s not one component, and if we’re missing one component out of the roof system, unfortunately it just messes up everyone’s schedules.”

The crisis prompted the NRCA to send a letter to the Department of Energy in October asking for aid. The NRCA also joined other industry associations in an open letter to the Biden administration in November, asking it to strengthen supply chains with actions like promoting transportation careers and flexibility in vaccine mandates.

“Given the unprecedented severity of the supply chain issues, we request immediate federal assistance with increasing the speed and capacity at our nation’s ports, quick restart of production when disaster strikes and other assistance,” the NRCA wrote.

As manufacturers and the federal government figure out how to resolve the crisis, roofing contractors have had to get creative to offer their clients solutions during storm recovery. Some only offer limited shingle colors, while others re-engineer roof systems using materials that are more readily available.

“Material availability, whether it’s membrane or insulation or adhesives or fasteners, are in such short supply that it’s very difficult to be able to get all the materials together to make emergency repairs on large areas of roof,” said John Geary, chief marketing officer for Nations Roof. 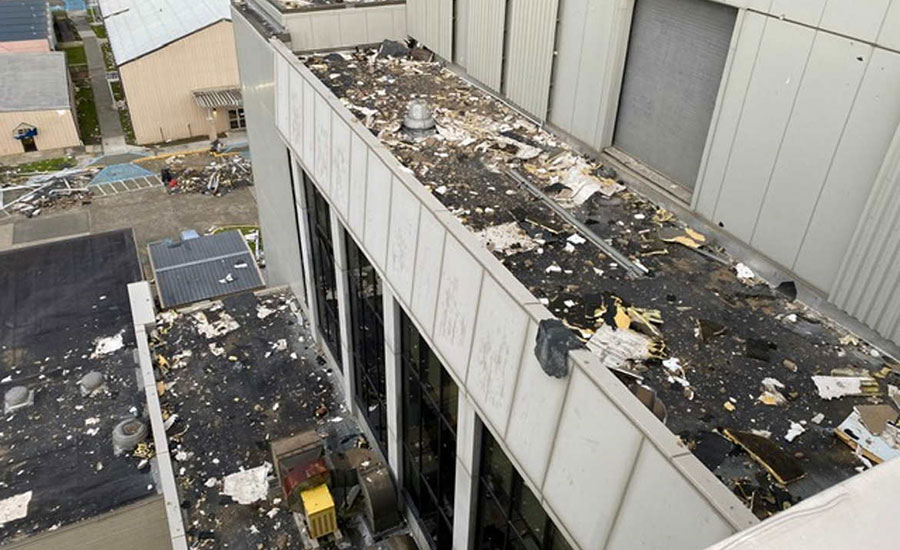 Damage caused by Hurricane Ida is estimated to be $64 billion.

Hurricane Ida tested the mettle of roofing contractors. The Category 4 hurricane caused massive damage resulting in power outages, lack of cell coverage, food, fuel, and housing issues. This year, however, those problems were compounded by the lack of skilled workers and supply shortages.

“Hurricane Ida presented new challenges with material shortages and lack of available manpower,” said Roman Malone, president of E. Cornell Malone Corp. “Not only during the temporary dry-in of the buildings, but also with long lead times of the reroofing materials. This caused us to have to install long-lasting temporary roofs that may have to protect the building for over a year.”

As a company with multiple locations, E. Cornell implemented weekly production meetings with multiple divisions at once to better coordinate material deliveries and project schedules. Malone said this has helped them to be more efficient and better allocate resources such as labor and equipment.

“Our company has worked closely with our manufacturers and suppliers to get orders in as soon as possible and keep up with current inventory levels,” he said. “We also have communicated well with our customers on educating them about this issue, as well as proposed delivery schedules. Often times, we are able to propose alternate products, or roof systems to decrease the lead times.”

Hargrove Roofing & Construction in Shreveport, La., expects to be working on jobs caused by Hurricane Ida for the next two to three years at minimum.

“It was by far the most strenuous and stressful two weeks in our young company’s existence,” said Billy Hargrove, CEO of Hargrove Roofing. “The storm repairs obviously last longer than two weeks as we are still at this moment working on them, but the initial first two weeks were like the Wild Wild West. We wanted to help everyone, and at the same time, we had to make sure our guys were getting help and rest.”

Hargrove said circumstances change every minute with material orders and demands change every hour. He described the supply situation as “organized chaos,” but is optimistic going forward.

“There is nothing we cannot do,” he said when asked what he learned.

Asked what he learned during this year’s storm season that he’ll carry into next year, Soule couldn’t help but joke.

“I should look into buying an ISO and fastener factory!” he said.

Despite the headaches it caused, this year’s storm season marked an occasion to celebrate for the Insurance Institute for Business & Home Safety (IBHS). In September, it announced the 30,000th FORTIFIED Home designation at a home in Atlantic Beach, N.C. FORTIFIED is a voluntary set of above-code design, building and retrofitting steps that strengthen homes against severe weather.

“It is not fate alone that determines which homes are devastated by hurricanes. The decisions we make as we build and reroof our homes play a significant role in how we weather a storm,” said IBHS President and CEO Roy Wright.

For homes requiring a temporary roof, the U.S. Army Corps of Engineers turned to Stormseal to help Hurricane Ida victims. The shrink wrap pilot program involves installing Stormseal's product over a damaged roof, secured at the perimeter with furring strips. A contractor then uses heat to shrink the material and create a water-tight seal. This is especially helpful for roofs that can’t have tarps nailed onto them, such as metal or tile.

"If this pilot program works as intended, it could really be a game changer for survivors needing a temporary roof following a major storm event," said U.S. Army Corps of Engineers, Memphis District and Hurricane Ida Recovery Field Office commander Col. Zachary Miller. "Disasters can devastate a region but being able to stay in your home while you recover is a win-win for the survivor and the community."

Cornerstone Building Brands formed a partnership with Habitat for Humanity to provide both affordable and resilient homes to those in need living in disaster-prone areas. This includes installing metal roofing that is low maintenance, can withstand hurricane-level winds and is fire resistant.

“The U.S. has seen a drastic rise in extreme weather events, and this increase is happening around the world,” said Susan Selle, chief marketing officer at Cornerstone Building Brands. “With these increases come damage and destruction to residential properties, often displacing families from their homes. Unfortunately, these events often affect lower-income areas where weather-proof exterior building supplies are too expensive or inaccessible.”

The National Low Income Housing Coalition shows there is a lack of 7.2 million affordable housing units in the U.S. for disaster-prone areas. To help address the need, Cornerstone Building Brands is working to provide alternate sources of supply, including multiple suppliers and different material options.

Roofing contractors interested in helping can check out the Home for Good project on social media and visit homeforgoodproject.com to be connected with their local Habitat.