While he’s found a way to proactively incorporate new and emerging technologies into the business model at Interstate Roofing, he’s the first to admit that he’s neither a "techie" at heart, nor some wunderkind prodigy that one might typically associate with high-tech success. Yet Interstate continues an impressive growth trend over the last decade that made it formidable in the market and developed a reputation as a perennial contender for RC’s Top 100 List. From aerial imagery and estimating software, to drones and virtual/augmented reality, Interstate’s also become an early adopter of tech tools that have revolutionized roofing.

After 25 years in the Denver-area’s volatile roofing market, Riopelle credits his suppliers, customers and team for proving the business can fight through the hard times while letting him keep sight of what success looks like in the future.

“I’ve learned a lot in roofing, and one of the most important things I understand now is that the salesman and what it took to get you there, won’t keep you there,” he explained. “Your mindset to get there is completely different than what keeps you there.

“You have to change your technology, your data, and evolve with what’s going to happen in the future, not just today.”

While the vast majority of roofing contractors might agree with that notion, not nearly that many put it into practice. It’s that vision and attitude that sets him apart from competitors, and the industry is taking notice. Riopelle was awarded the Roofing Technology Think Tank’s second-annual Innovator of the Year award, presented late last year during RC’s Best of Best of Success virtual event.

The judges selected Riopelle from a cache of entries highlighting the recent impact technology has had on the roofing profession, both on the roof and in the office. It was a “blind” ballot process, meaning a panel of esteemed roofing contractors and other industry professionals ranked nominations based solely on the technological information provided on the nomination form, without names. Rackley Roofing President Curtis Sutton received the award in 2019.

Recognition of Interstate’s growing reputation for performance and undeniable success was among the takeaways from earning the award, according to Riopelle. The company reported more than 300 employees (including subcontractors) and generated more than $58 million in revenue in 2019. But the other key aspect was his approach to growing his business and moving the industry forward at the same time.

“Innovation is not just going digital and using a computer program, it’s looking at what’s going to happen in the future and you’ve always got to be digging,” he said. 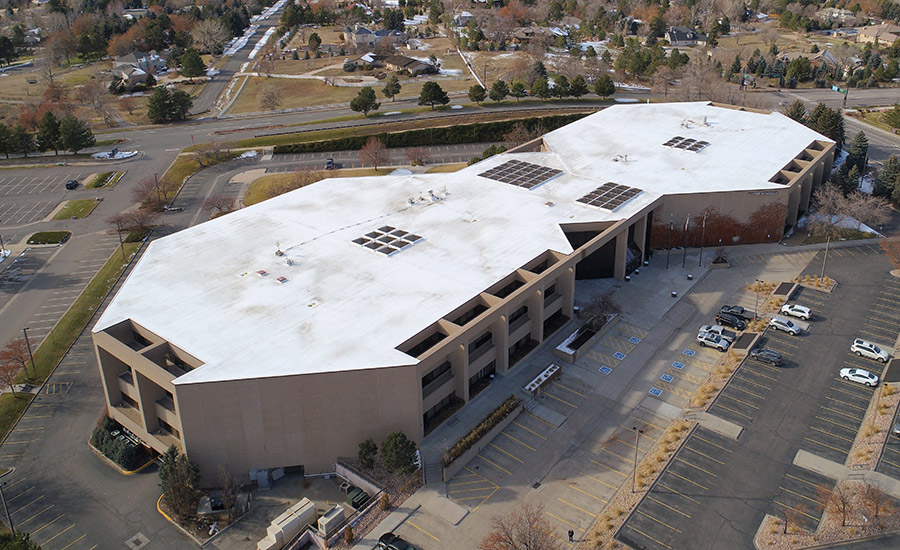 Riopelle credits his ability for seeing the bigger picture back to his rough-and-tumble upbringing on the outskirts of Detroit.

The “bad-ass” attitude he developed — and his physical frame — suited Riopelle well as a bouncer in Detroit’s nightclub scene. During the day, he followed the family tradition and got into factory work. After 89 days he was laid off from his stint in a steel mill, and followed some friends that were earning a lot of cash quickly by replacing hail-damaged roofs in Colorado.

Living in a studio apartment with an air mattress, Riopelle went to work. Roofing paid most of the bills, and at night he returned to bouncing — this time at a gas station/bar in greater Denver, which he swears could get as rowdy as a weekend night at Detroit’s vaunted St. Andrew’s Hall. Until one day, the roofing company check bounced.

“That’s really the only reason I went out on my own, otherwise I’d still be there,” he said. “But I realized I was working too hard to have that happen.”

With his ninth-grade education and no formal business training, Riopelle was opportunistic. He started out by hiring patrons at the local rock-climbing gym to do roof measurements. Within a few years, Riopelle said those climbers became roof salesmen and permit pullers, and he assembled a team that began working hundreds of storms.

He has the paper to prove it, storing pallets worth of job files containing thousands of documents in his warehouse. Those pallets are now motivation for change, as Interstate aims to convert completely to paperless. It wasn’t always his mindset.

“Us old timers are set in our ways and don’t always want to embrace new technology,” said Riopelle, 48. “But having the right people and younger generation involved in my business has helped me see the benefit.

“I have to live outside my comfort zone. As owners we all know that, but we are scared of change. We know what works, and it’s hard to get out of that comfort zone to see if something else can improve what you do. But I had to do it to change.”

That change picked up momentum when Riopelle hired Tom Bouckaert as a production manager in 2017. He revamped Interstate’s operations and helped streamline most of the company’s key business functions, including billing and sales. Before he came aboard, Interstate’s installers were tethered to the central office, costing time and resources.

“They’d have their paper job order and couldn’t get to their jobsite unless they physically came into the office first,” said Bouckaert, now 29, and a managing partner. “When you think about all that time and gas and everything that goes with that process you’re asking yourself, ‘What are we doing here?’” 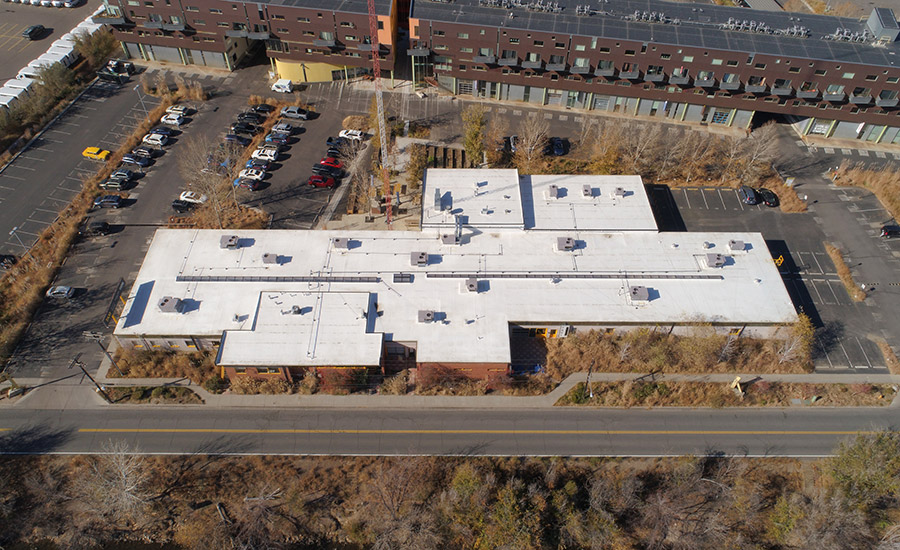 As the COVID-19 pandemic lingered on, both Riopelle and Bouckaert said they asked that question repeatedly, and found some sobering answers. Riopelle contracted the virus and overcame after a few weeks, but said he never had to worry about the state of the business with his team in place. That said, the pandemic exposed some softness in the roofing market that Riopelle had to adjust to.

“COVID-19 changed our minds about a lot of things about the future,” he said. “We all found our weaknesses out and re-evaluated what we’re doing. We downsized in order to grow in the future, because when you’re living in chaos, staying busy every day, you’re not able to make the changes needed.”

The company also switched emphasis from job volume to job profitability, which sets the stage for Interstate’s expansion into siding and solar. Colorado’s elevation makes it a solar “hot-spot” and a prime opportunity to diversify further. Interstate established a solar division this year and has a master electrician on staff to be able to meet Colorado’s regulatory requirements. Solar energy has been around long enough that it’s hard to say Riopelle is ahead of the curve, but in terms of adapting his roofing company for the future, he believes they’re getting involved at the right time.

“Some of our biggest competitors are solar companies that transitioned to roofing, which is easier to do than converting a roofing company to a solar company,” he explained. “Solar is a whole different animal, but we have to innovate and think about what’s going to happen next.”

That’s what’s driving him now, aside from this three children — ages 6, 9, and 10 — to firmly say that he’s not going to Silicon Valley, or anywhere else, while the work he’s doing with Interstate has never been more challenging or rewarding.

Successes of the past, such as incorporating aerial measurements, CMRs, real-time communication and information sharing, are all examples of what the future holds.

“It wasn’t an easy transition, but I knew this stuff had to be done,” he said. “If we can’t forward think, we’re not going to be able to change, and we’re going to be Blockbuster (Video) or Payless, and I don’t want to be them.”

Editor's Choice: Tech Tools and Storm Response are Top of Mind in 2021