OGDEN, Utah — A Utah university has turned a leaking and “underutilized” rooftop plaza into a functional space complete with four pickleball courts.

Pickleball is a paddle sport that combines elements of badminton, tennis, and table tennis. Basically, two or four players use solid paddles (typically wood) and hit a ball that is similar to a wiffle ball.

According to the Sports & Fitness Industry Association, pickleball is the fastest-growing sport in the U.S. with more than 2.8 million players and 12 percent increase from 2017 to 2018.

It also it what Salt Lake City-based MHTN Architects – along with officials from Weber State University, and designers and builders — turned to when engaged to solve problems with the waterproofing system on the roof of the school’s Stromberg Athletic Complex.

Rebuilding the waterproofing system meant tearing up a roof-top plaza composed of stone pavers, a few benches, and small grass lawns. The university felt the plaza was underutilized and rebuilding as it was prior to construction simply didn’t make sense.

“This was great space right in the middle of the university’s physical education complex. It needed to be activated,” said Thomas. “Pickleball is a fun new sport enjoyed by people of all ages. The space comfortably accommodated four courts.”

MHTN worked with the university and general contractor Okland Construction to repair the structural steel and integrate a completely new, warrantied, waterproofing system below the plaza as they readied the roof for the new courts.

“With the waterproofing system rehabilitated, we then needed to think carefully about drainage, especially for the surface of the courts,” Thomas said.

Though the space was ideal, like tennis, legitimate pickleball courts require a post-tension concrete slab to eliminate joints on the playing surface and minimize concrete cracking.

The courts need to be as flat as possible, yet still capable of efficiently draining water from the surface, and in this case, off of the building as well. Since the roof’s existing structural slab was sloped to drain, designers needed a void-filler between the structural slab and the underside of the courts’ post-tensioned slab.

The fill needed to be lightweight to minimize additional structural loading and economically feasible within the budget. That’s where designers turned to a unique building material, Foam-Control Geofoam from ACH Foam Technologies.

“We’re used to working with tapered insulation to create a roof’s drainage slope,” continues Thomas. “However, this was kind of an upside-down situation where we were trying to eliminate most of the slope rather than add it.” 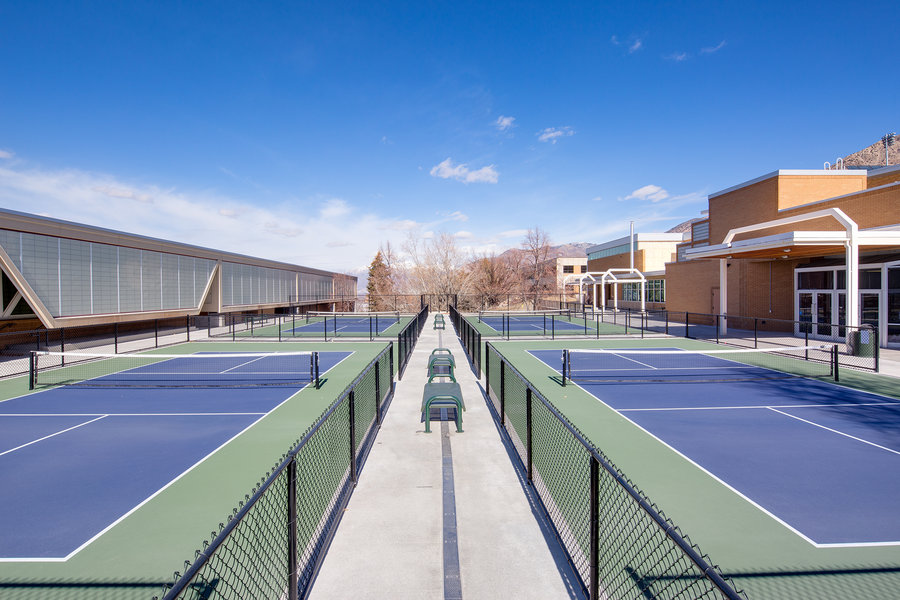 Incorporating a two-stage drainage system, water on the court surfaces is shed to a center trench drain, accompanied elsewhere by the waterproofing system on the structural slab and roof drains. The geofoam profile had to deliver virtually flat courts yet still direct water to the trench drain.

The responsibility of overseeing the rehabilitation including the non-degrading geofoam blocks fell to Les Hamby of Okland Construction. Hamby was the superintendent in charge of construction and over a 22-year career with Okland, he’s built just about everything.

“The project was really about limiting the added weight on the roof and getting a very precise taper,” said Hamby of the primary construction challenges.

ACH Foam Technologies’ molded polystyrene rigid geofoam is a lightweight, cellular plastic material that is incredibly strong. Foam-Control Geofoam products range in compressive strength from 2.2 pounds per square inch (psi) at one percent deformation all the way up to 18.6 psi.

Working with surveyors and ACH Foam Technologies’ representatives onsite, once the structural slab was exposed a series of spot elevations were taken. The survey data was used to establish the exact geofoam profile required to fill the void between the roof and the post-tensioned slab. Meticulously defining the thickness of each piece of foam allowed designers to control positive drainage off the courts and make sure the total volume of added weight didn’t approach structural limitations.

“The geofoam platform was about 10 inches thick in the middle and tapered to zero at the edges,” said Hamby.

The final deck height had to match the threshold of the plaza’s existing entry door, which couldn’t be changed, so each piece of foam across the whole roof was unique.

“Getting precut pieces on the job site in a logical order really expedites the time it takes to lay down the material,” said Hamby

Thomas said the geofoam was critical to the success of the project.

“I think renovation is a big part of architecture. To repurpose this plaza to a completely new function is exciting,” said Thomas. “ACH Foam Technologies’ geofoam product was an important part of what made this transformation of space possible.”