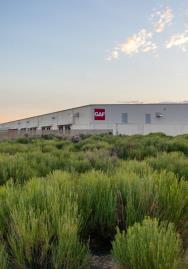 of-the-art site was announced in spring of 2013. The site houses GAF’s third TPO and third ISO production lines, and is the company’s second combined TPO/ISO facility. TPO began shipping from Cedar City on Aug. 1 and ISO products are expected to begin shipping in early 2015.

The 541,000-square-foot plant produces the full line of GAF TPO products, including EverGuard® TPO and EverGuard Extreme® TPO, and it will manufacture both ISO roof insulation and residential sheathing. In addition, the plant will include a new training center for the Center for the Advancement of Roofing Excellence (CARE) to support the continued and growing demand for its training classes.

“Our venture in Cedar City is an example of GAF’s continued strategic investment in the commercial roofing industry,” stated Gerry Messina, GAF’s executive director of commercial marketing. “The facility will give us the ability to better service our customers throughout the country.”

An American-owned company with American-made products, GAF is proud to create additional jobs in the United States. There are currently 40 employees at the plant, with an additional 10-15 expected. The company also produces TPO at its Mount Vernon, Ind., and Gainesville, Texas, facilities.