READING, Pa. — CopperPlus™, a copper-clad stainless ASTM B 506-09 steel roofing material supplied by Heyco Metals of Reading, Pa., has been selected to 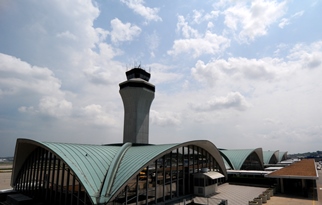 CopperPlus features two outer layers of 100 percent copper metallurgically bonded to a core of Type 430 stainless steel. The resulting product offers the increased strength and reduced thermal properties of stainless steel with the beauty and patination properties of solid copper. According to Airport officials, 102,000 square feet of CopperPlus will be installed on four domed vaults in phases over approximately 10 months.

“The new skin will shine of raw copper like it did in the mid 50s when the Terminal was built,” said St. Louis Mayor Francis Slay in a press release issued by the Airport. “The roof will slowly transform in color again with time as this Airport serves new generations in this region.”

According to Deputy Airport Director of Planning & Development Jerry Beckmann, the 60-year-old roof sustained heavy damage during an EF4 tornado strike in 2011. Deciding it was more economical to replace the aging roof rather than repair it, the Airport issued a public Request for Qualifications.

“As an engineer, I wanted to make sure the replacement material would be watertight and hold up well in storm events,” said Beckmann. “The Airport directors were concerned about maintaining the historic architectural integrity of the roof. I did some investigating and liked what I heard about the copper-clad material. It looks identical to solid copper but doesn’t expand and contract as much in the heat, and has better soldering characteristics.”

Introduced in the 1960s, CopperPlus is used in a wide range of commercial and residential roofing and architectural metal applications requiring high strength, durability and economy. Its lighter weight eases handling and installation, while its low thermal conductivity permits easy soldering. Available in coil form, CopperPlus can be cut to any desired length and formed into virtually any shape. Significantly stronger than copper at a thinner gauge, it is widely used throughout tornado-prone areas in the United States.

“CopperPlus will provide a significant strength advantage for the St. Louis Airport,” said Heyco Architectural Product Manager Richard Petty. “There have been wind uplift tests in Miami-Dade County showing the strength of CopperPlus is equal to steel at the same gauge. It’s the perfect material for wind events like those seen in St. Louis.”

Next RSI Expo to Be Held in Dallas