In an effort to reduce operating costs, shrink power plant-generated greenhouse gas emissions, obtain green building certifications, and make building materials last longer, owners and managers of commercial buildings are looking for ways to lower their building's energy consumption. Among the many energy-savings strategies they may use, "cool roofs" have gained considerable traction.

Cool roofs are designed to reflect solar radiation and emit heat more efficiently, to reduce heat build-up (HBU) on the roofing substrate and inside the building, as well as potentially reduce air conditioning loads. Cool roofs can be achieved either by installing solar-reflective materials during initial construction or by refinishing an existing roof with a solar-reflective coating, making cool roofs a winning strategy for new-build and renovation projects alike.


Energy Use in Commercial Buildings

On average, commercial buildings account for 18% of the country's primary energy use and 35% of its electricity consumption; and the U.S. Environmental Protection Agency estimates that 30% of that energy goes to waste. Because cooling systems consume 15% of the electricity used by commercial buildings, property owners can recognize significant savings by reducing the energy required to run them.

Improved energy efficiency does more than help commercial buildings save on operating costs. It can also help them achieve credits toward green building programs such as the U.S. Green Building Council's (USGBC) Leadership in Energy and Environmental Design (LEED®) program, the Green Building Initiative's Green Globes™ program, and the International Living Future Institute's Living Building Challenge™. Certifications in these programs provide building owners with a valuable point of differentiation to help them attract and retain tenants.

Improved energy efficiency also helps commercial buildings reduce their contribution to urban heat islands (UHIs), further improving their environmental footprint. UHIs form when trees and other vegetation are replaced with buildings, roads and other heat-absorbing infrastructures that emit heat and make the outside air warmer. According to the Lawrence Berkeley National Laboratory, UHIs can increase air conditioning energy use, impair air quality by accelerating the formation of smog, and aggravate heat-related and respiratory illnesses. 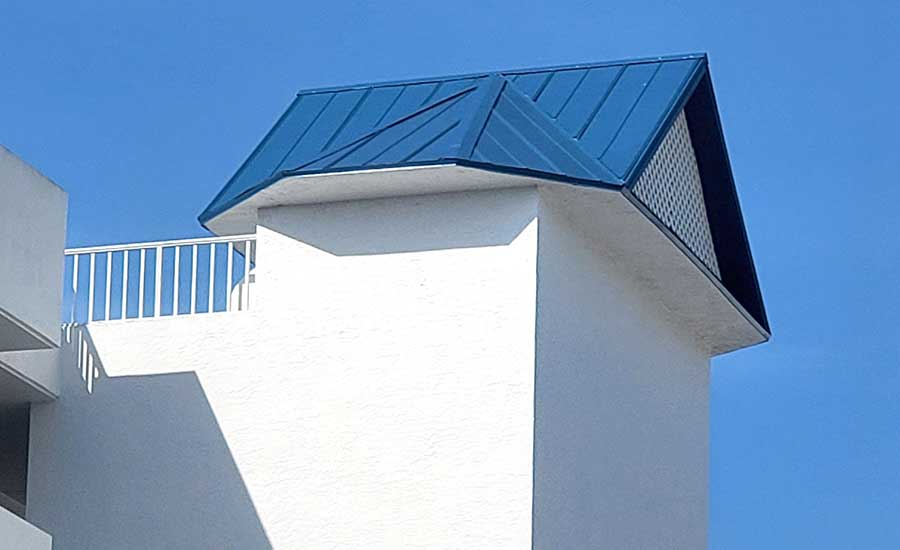 A cool roof can stay more than 50 degrees Fahrenheit cooler in the summer compared to dark roofs, according to data from the U.S. Department of Energy.

The Science of Cool

For over two decades, commercial buildings have been implementing cool roof technology to reduce energy consumption, improve occupant comfort, reduce maintenance costs and prolong the roof's service life. Just as wearing light-colored clothing can help keep a person cool on a sunny day, cool roofs use solar-reflective surfaces to maintain lower roof temperatures. While traditional dark roofs can reach temperatures of 150 degrees Fahrenheit or more in the summer sun, a cool roof under the same conditions could stay more than 50 degrees Fahrenheit cooler, according to data from the U.S. Department of Energy.

Three material surface properties can be measured to determine how cool or hot a roof is. Better performance in these areas can help to reduce a building's HBU.


The Cooling Effect of Coatings

Short of physical shading, the best way to achieve a cool roof is by coating it, whether in the factory by the roofing material OEM or applied in the field by a professional coating contractor.

However, not all coatings provide the performance needed to achieve high TSR, LRV and thermal emittance. For example, exterior latex and premium acrylic binders in paints will break down when exposed to solar irradiance, allowing dirt, mold and mildew to infiltrate the coated surface, which reduces TSR and related energy savings. This break down is called film erosion, where the coating chalks and wears away from the substrate and will continue to do so until the coating no longer protects the surface.

A coating's pigments also play a crucial role in its TSR, LRV and thermal emittance properties. For example, organic pigments can break down over time when exposed to UV energy and the elements. Complex inorganic pigments, on the other hand, contain mixed metal oxides that reflect the sun's rays. In comparison to organic pigments, complex inorganics, especially IR-reflective types, and when used in a PVDF-based formulation, are encapsulated by the fluoropolymer for additional protection from the elemental exposure that can break them down and therefore maintaining their color for much longer.

The sun's heat is one of the biggest contributors to reduced durability and longevity of roofing systems. The right protective coating can help reduce film erosion and heat absorption by reflecting UV and infrared radiation. Such high-performance coatings can also resist buildup of dirt, mold and mildew, keeping them cleaner, reducing the amount of maintenance needed, and allowing the reflective properties to be sustained for longer.