This website requires certain cookies to work and uses other cookies to help you have the best experience. By visiting this website, certain cookies have already been set, which you may delete and block. By closing this message or continuing to use our site, you agree to the use of cookies. Visit our updated privacy and cookie policy to learn more.
Home » 5 Things About SoFi Stadium Before Super Bowl LVI Sunday
Low Slope RoofingSteep Slope Roofing

For the second straight year, a team competing in the biggest football game of the season will be on familiar turf. The Los Angeles Rams will take on the Cincinnati Bengals this Sunday in Super Bowl LVI in their home venue, SoFi Stadium — which has one of the most recognizable and most talked about roofs on the continent since it opened.

As usual, that prompted a closer look from RC — and here’s what we found and wanted to share before the big game. 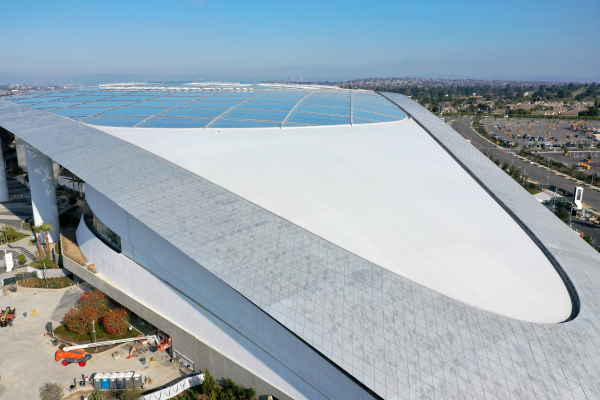 It’s no coincidence that the most lavish, technologically-advanced, and high-priced stadium in all of American sports is in the shadow of Hollywood. SoFi Stadium — the home of two NFL franchises (Rams and L.A. Chargers) opened in 2020 with a price tag swelling somewhere between $5-6 billion, according to published reports. And it doesn’t disappoint. The 3.1 million-square-foot, open-air complex is an architectural marvel that can hold up to 100,000 under its sweeping canopy roof. More on that later. 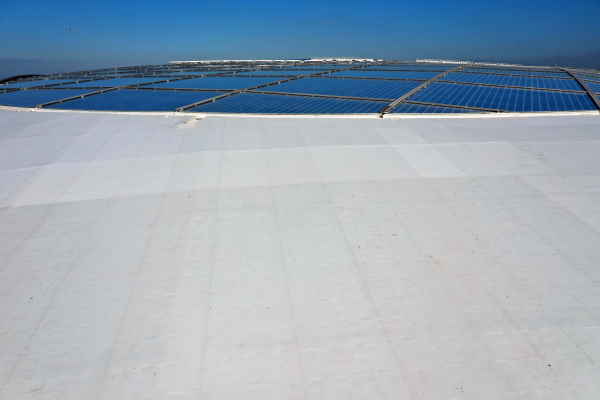 Meteorologists predict a mini-heat wave to strike Southern California just in time for Sunday’s game, perhaps elevating temperatures to an unseasonable 90 degrees by kickoff. That would make it the hottest Super Bowl on record, eclipsing the prior high of 82 degrees set in 1973 and 2003 — both also played in California.

Though being just five miles off the Pacific Ocean, the Inglewood area surrounding SoFi Stadium isn’t expected to offer much relief, maintaining just a few degrees lower than downtown through the weekend, the National Weather Service reported. But that forecast doesn’t take into account Sofi’s unique open-air design to keep inhabitants cool. 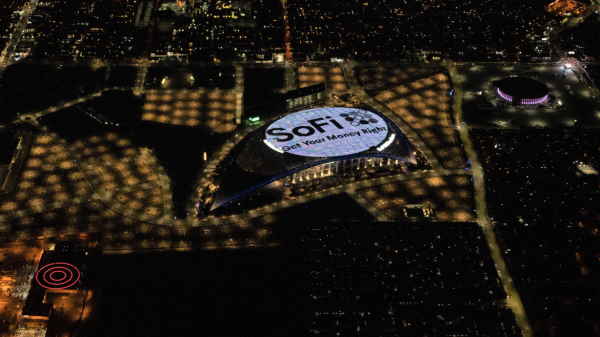 SoFi Stadium’s signature rooftop canopy is composed of ETFE (durable clear plastic panels) that are remarkably just 1% the weight of glass. It’s also made of a Sika Sarnafil PVC roof membrane that’s designed to cover patrons, but still lets in that Southern California breeze. Inlaid within the roof are thousands of LED lights that can turn the roof different colors, and can reportedly be seen by aircraft heading in and out of nearby LAX.

Best Contracting Services Inc., of Gardena, Ca., installed more than 183,000 square feet of Sarnafil roof membrane in reflective gray over 40 separate roof sections — earning them a 2020 Project of the Year Award from Sika. 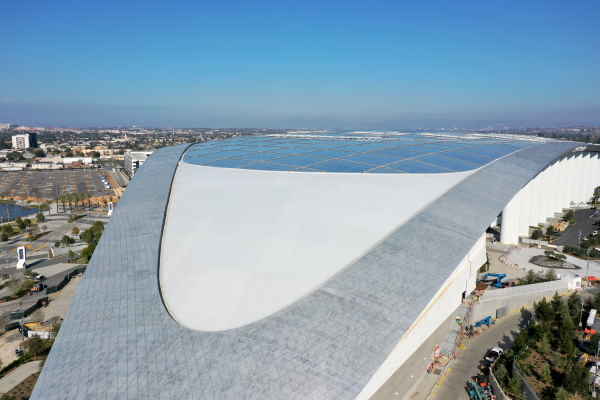 The roof doesn’t just have to do its job keeping water out on the exterior, it plays a big role on the venue’s interior as well. Another one of SoFi Stadium’s can’t-miss signature features is the Oculus video board. The dual-sided oval scoreboard showcases the action on the field, as well as advertisements and other video content on 4K HDR screens comprised on 80 million pixels. It’s the largest of its kind in sports entertainment — weighing a whopping 2.2 million pounds — and is entirely suspended from the roof. 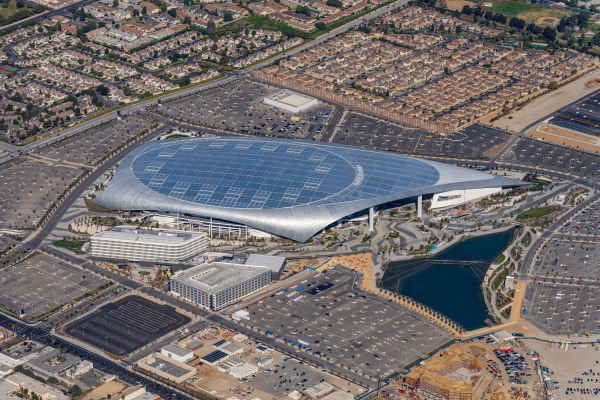 The mammoth stadium is just part of the vision for what developers dreamt up for the massive revamp of the former Hollywood Park Racetrack. Construction is well underway across the 300-acre development where they’re adding 340,000 square feet of retail shopping, a hotel, more than 2,500 apartments, 30,000 square feet of office space, and other entertainment spaces.

5 Things About the Raymond James Stadium Before Super Bowl LV

5 Things About the NRG Stadium Roof Before Super Bowl LI