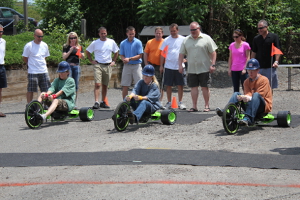 The approximately 100 employees at Garland’s corporate headquarters dedicated a week to raising money in support of the ALCF through various fundraising activities. At the end of the week, which is fittingly called Spirit Week, funds raised totaled just more than $20,000. Touched by the incredible generosity of its employees, Garland’s Board of Directors announced that the company would match the amount raised, bringing the total to $40,634.

“The outpouring of support demonstrated by The Garland Company is truly amazing,” said Bonnie J. Addario, founder of the ALCF and lung cancer survivor. “Garland is helping raise awareness for a disease that is sorely under-funded and under-researched. Their generosity will help lung cancer patients everywhere live longer, fuller lives.”

David Sokol, president of Garland Industries, added, “At Garland, we believe more than ever in the mission of the Bonnie J. Addario Lung Cancer Foundation. The employees here have embraced the essence of Spirit Week, and we are truly honored to contribute to such a worthy cause.”

The ALCF has a special connection to The Garland Company. Emily Bennett Taylor, the wife of Garland employee Miles Taylor, is a stage-four lung cancer survivor and member of the Addario Young Adult Advisors, an advisory board of the ALCF made up of empowered young professionals who raise awareness by conveying the critical message that the disease does not discriminate based on age, gender, race or background.

The Foundation, now one of the largest philanthropies devoted exclusively to eradicating lung cancer, has raised more than $10 million to fight the disease through early detection, education, treatment, awareness, clinical trials and research that impact patients now. The ALCF also established the groundbreaking Addario Lung Cancer Medical Institute (ALCMI), an international research consortium of major institutions and community hospitals. Through empowering patients with innovative programs and building strategic collaborations, the Foundation’s goal is to transform lung cancer into a survivable, chronically managed disease and ultimately to find a cure.