Green Roofs are Growing in Popularity, with Industry Expected to Hit $14 Billion by 2026

Green roofs are roofing systems that use vegetation over waterproofing membrane to partially or completely cover the roof. They not only battle climate change and pollution, but beautify cities and decrease surface runoff from rainwater, making them desirable in today’s environmentally-conscious society. That desire is transforming a once niche roofing system into a $14-billion industry by 2026.

“Before, we were crawling along, seeing if it was going to leap, were (green roofs) going to die, what was going to happen,” Keitges said. “Now, globally, it’s going to be a $14-billion business by 2026, so it’s now a business.”

Keitges said the growth is partly due to the COVID-19 pandemic, which caused buildings to become virtually empty as people work remotely. Now building owners and businesses are seeking ways to bring people back by giving them green spaces to enjoy. Columbia Green Technologies recently completed such a project, renovating the roof of the Chicago Post Office, a 100-year-old historic building, into a 3.5-acre park.

“I’ve seen it switch from just environmental, which is the new development, to now focus more around people and making these building better for the people, and that’s really fun and exciting, it’s just totally flipped,” Keitges said. “Think of how many rooftops we could be replacing, upgrading and leveraging.”

Hospitals are seeking green roofs to promote mental health and well-being based on the idea of “biophilia,” a hypothesis stating humans have an innate instinct to connect with nature. A study from 2015 found there is “solid environmental evidence for the value in biophilic architecture,” including increased healing rates in hospitals with views of nature and daylight.

“The data is actually so profound that the medical industry adopted it, and now I hardly doubt you’re going to see a hospital built without using biophilia,” Keitges said.

School districts are getting in on the action as well. In Maryland, the Montgomery County Public Schools district is seeking LEED certification for new and remodeled school buildings, and is installing green roofs for its facilities. 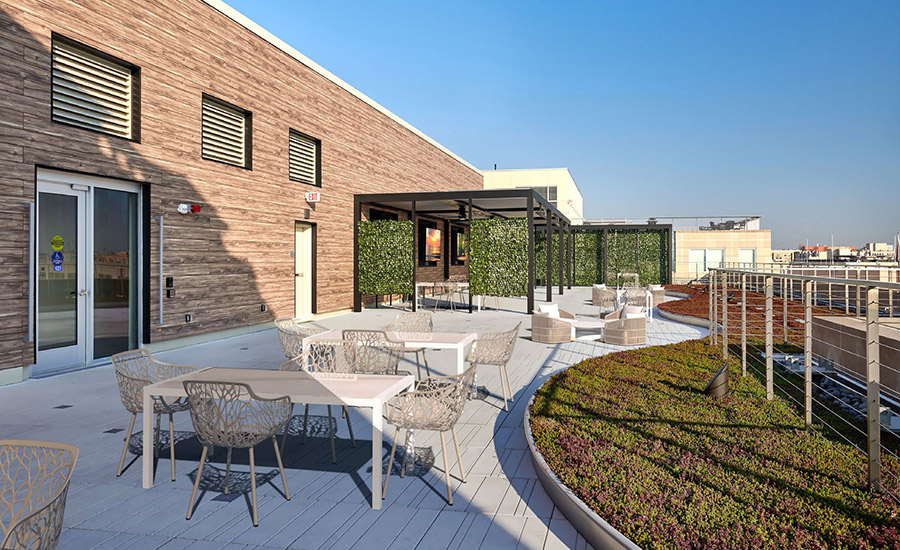 Saving the Environment and Money

Aside from the environmental benefits, contractors should consider the economic advantages green roofs provide their clients. A study published in July 2021 from the University of Technology Sydney found that green roofs can improve the efficiency of solar panels.

By comparing two identical buildings of similar age in Sydney, Australia — one uses photovoltaic (PV) panels and the other uses integrating PV panels with a green roof — researchers found the green roof PV array had an average daily power output greater than the conventional roof by 39 kilowatts (13.1%). Overall, the green roof PV produced an increased average hourly energy output of 2.48% at any given light level.

The green roof system produced a monthly revenue of $2,360 compared to $2,036 from the conventional roof. This equates to $2,595 in additional revenue over an eight-month period, researchers said.

“Despite some differences between the matched buildings, it is nonetheless apparent that measurable benefits can be directly attributed to the presence of the green roof related to biodiversity provision, stormwater management, thermal insulation and PV energy production,” the study concludes.

Meanwhile, a 2018 case study from the Environmental Protection Agency concluded that, if Kansas City, Mo. installed more than 700,000 square feet of green roofing between 1990 and 2020, it would result in emission reductions that equate to monetized health benefits of $35,500 to $80,500. 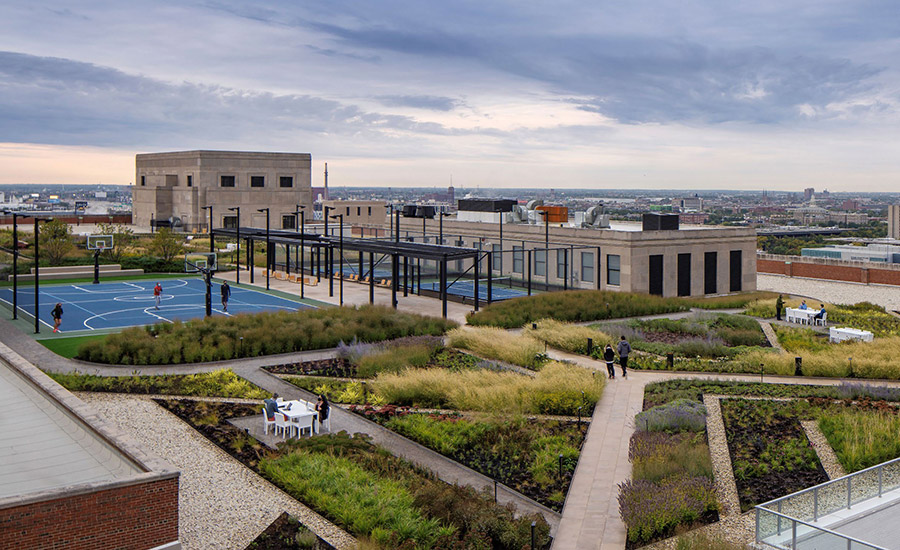 The roof of the Chicago Post Office has been coverted into a 3.5-acre park. Photo: Tom Rossiter Photography

Extensive green roofs are lightweight roofing projects with roughly 10 to 25 pounds per square foot of vegetation, with around 3 to 6 inches of depth. They are considered low maintenance and practically self-sustaining, supporting plants like mosses, herbs and sedums and typically don’t require an irrigation system.

“It’s green on day one, very affordable, and easy to install and easy to maintain,” said Keitges.

Intensive green roofs are those supporting around 80 to 150 pounds per square feet of vegetation and around a foot of depth. These require frequent maintenance and most often an irrigation system. They support a wide variety of plants, ranging from grass to small trees, and retain more stormwater than other green roofs.

There is a hybrid of the two known as semi-intensive, which are typically around 6.5 inches of depth and support multiple plant types. They require more maintenance than extensive roof projects, but are great for stormwater management.

As great as green roofs are, they do come with certain disadvantages. The initial cost of a green roof can be double that of other roofing systems, causing building owners to hesitate on selecting the option.

A building’s infrastructure needs to be able to support green roofs, especially intensive green roofs, which can raise the price of a project even further. In 2016, a green roof caused the collapse of a sports hall at City University of Hong Kong because the structure couldn’t support it.

Waterproofing is crucial for green roofs, especially those that retain water on the roof. You also run the risk of roots from plant life breaking through the waterproof membrane. 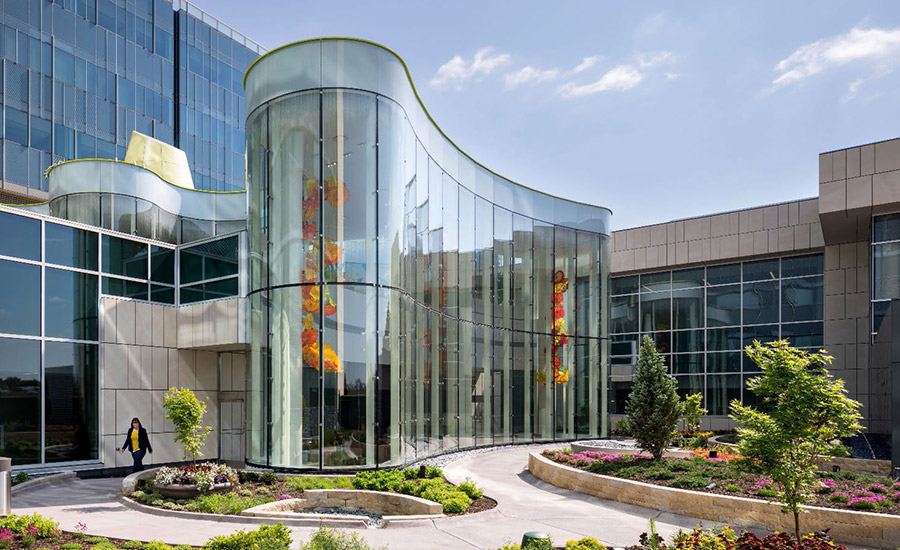 “The SOPRANATURE TOUNDRA BOX helps retain rainwater at the source,” said Tom Stuewe, product manager for liquids products and SOPRANATURE at SOPREMA. “This feature is essential in the context of stormwater-efficient management in highly mineralized urban areas. Plus, by acting as an additional protective layer, the vegetated surface extends the service life of the roof’s waterproofing system.”

Keitges said the green roofing market is split 50/50 between contractors and landscapers. A job like the Chicago Post Office project would be handled by a landscaper, while those that aren’t as park-like are handled by contractors.

“What’s really great about this evolving market is there is an opportunity for both, there is so much existing building that needs to be green,” Keitges said.

For roofing contractors, the work tends to focus on extensive green roofs. A typical job includes laying down waterproofing and placing trays on the roof that contain the greenery. These are the ideal types of green roofs contractors can include in their offerings to diversify and enter the market. If successful, they can expect an extra $20 to $25 per square foot for their projects, said Keitges.

“When you’re designing these types of projects, you have to really care about the details, so the contractors are the best that you can possibly connect with,” Keitges said. “This is a very easy product that existing buildings or even new buildings like schools can use.”

Safety Gear for Women in Roofing

Turning Green into the Black