This website requires certain cookies to work and uses other cookies to help you have the best experience. By visiting this website, certain cookies have already been set, which you may delete and block. By closing this message or continuing to use our site, you agree to the use of cookies. Visit our updated privacy and cookie policy to learn more.
Home » Q&A with GAF Energy President Martin DeBono on the Future of Solar Roofing
Roofing NewsSteep Slope RoofingSustainability

With solar becoming more popular each year, some of the biggest solar companies are adding roofing to their business models to become one-stop shops for homeowners seeking solar roofing.

This blurring of the lines could leave roofing contractors in the dust. That is why GAF Energy is among the roofing companies looking to give contractors a leg up by offering easy-to-install solar products, such as its integrated solar roof. Not only can roofing contractors offer clean energy options for their customers, this diversification could lead to more revenue per home.

Martin DeBono, president of GAF Energy, sat down with RC to talk about integrated solar roofing and where he thinks the solar roofing industry is heading in the future.

RC: What is GAF Energy’s mission regarding solar?

MD: The whole idea behind GAF Energy is there’s no better time to go solar than when you get a new roof. The efficiencies of project management, of sales and marketing, supply chain, are amazing and they allow a homeowner to get a fully roof integrated solar system of extremely high quality at the same price as if they were to go and have a new roof put on and then have a new solar system put on after it.

Even for roofers that don’t sell a lot of solar, by virtue of the fact that they’re offering solar, homeowners feel more comfortable doing business with them because they recognize that hey … they’re not just a one-trick pony.

RC: What are the benefits of integrated solar versus traditional solar systems?

MD: If you get solar after putting your roof on, you’re going to drill, on average, you’re going to have 20 solar panels, each has six attachment points, that’s 120 holes into the waterproof barrier of your home, right? And each of those are about half an inch. Imagine if you have 120 half-inch holes in your brand new roof, you’re now violating the water barrier.

Roof integrated solar takes the opposite approach — the solar is the roof. You’re going to have the same level of water protection with solar as you would have with a regular roof.

We use a product from Solaria, which is an American company, and our solar panels are all black. You don’t see the silver lines that sometimes you see in other people’s solar offerings. Our solar looks great because it is integrated into the roof, it is low profile, and because you can use asphalt shingles, it blends into the home’s aesthetic. 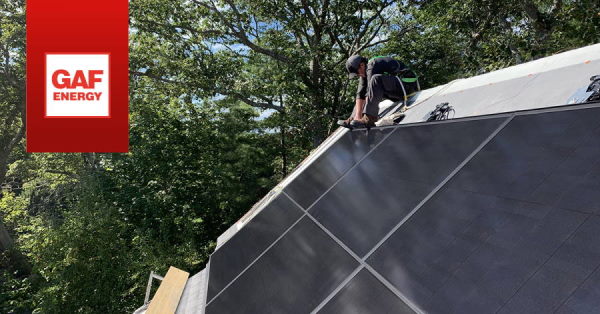 RC: How does GAF Energy work with roofing contractors?

MD: Our services include full proposal, design, and permitting documents for the homeowner of both the roof and solar. We then provide electrical services where we will have a GAF Energy electrician come out and complete the electrical installation after the roofer is done with their part.

RC: How soon after receiving training can a crew expect to be fluent in installing integrated solar?

MD: By the time they do two of them they’re experts, quite candidly. It’s just not that hard, it’s really easy.

There have been a number of roofing companies where we never actually did the on-site training because of the pandemic. In those cases, we do a virtual training in the classroom and then for the first install we have one of our trainers available via video and we’ve had a number of roofers who were able to install it with our video support.

GAF Energy — having a strong heritage in roofing — designed the product for roofers, so it’s a real easy training program.

RC: How does GAF Energy’s integrated solar compare to others in the market?

MD: The market is so wide open I don’t see them as competitors, but like compatriots in trying to convince the world that the old way of putting solar panels on top of your roof is wrong, and there’s a better way with having roof-integrated solar. In that respect, I’m really supportive of any organization in trying to drive the move toward roof integrated solar as opposed to the old method. That will drive costs down for everybody.

Clearly our products are different. Our product is differentiated because we leverage GAF heritage as a roofer, we leverage GAF’s roofing materials, its best-selling shingles, underlayments, etc. We integrate really well with traditional asphalt roofing shingles. Our competitors are really focused on a different material. I don’t know any building integrated solar that actually works with asphalt except for ours.

RC: Has the pandemic affected the demand for solar roofing?

MD: I think what you’re going to end up with is 2020 was an OK year for solar. I don’t think it was the pandemic so much as the threat of losing some incentives that really drove solid Q4 growth, because the pandemic has also kept a lot of sales people from sitting inside the home of their prospective partners, and that certainly makes it more difficult to sell solar. 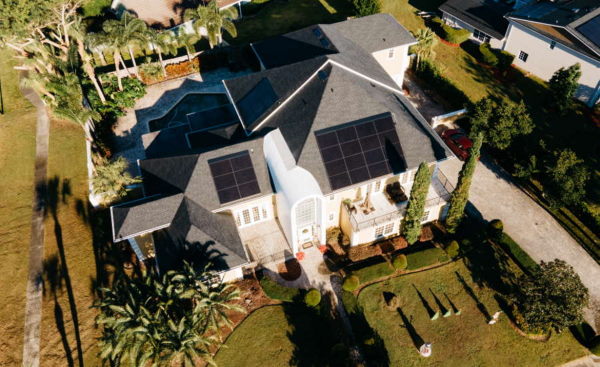 RC: Do you see solar becoming more commonplace in the future?

MD: Consumers are more and more aware of the environmental impact of their decisions. It’s just an outcropping of the greater awareness of … and impact of burning fossil fuels. They just want to make a difference.

It’s more convenient to go solar. It’s inevitable. Just as roofing evolved from thatched roofs to cedar shakes to asphalt and metal roofs, it’s going to evolve into solar roofs. It’s really inconceivable for me to think that in the next 30 years most roofs won’t be solar roofs, and the reason I say that is the cost trajectory for solar is so compelling that it will be a no-brainer for someone to say, “Why would I get a regular roof when I can get a solar roof?”

RC: How do roofing companies sign up to sell GAF Energy solar?

MD: GAF Energy is an independent company from GAF, but we work very closely with GAF’s sales force. If their roofing contractors are interested they can reach out to their GAF territory manager and they’ll work with our GAF Energy sales force.

3 Roofing Companies Face More Than $750,000 in Fines for Safety Violations