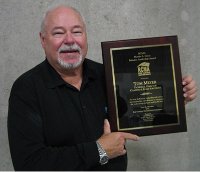 Meyer is the 28th recipient of the Martin A. Davis Industry Leadership Award and was presented with this honor at this year’s RCMA Annual Meeting, Feb. 20, 2012, at the Rosen Plaza Hotel in Orlando, Fla. The Martin A. Davis Industry Leadership Award is the highest honor bestowed by the Roof Coatings Manufacturers Association. The award is presented annually to an individual, selected by his or her peers, who has exemplified outstanding service and made significant contributions to the roof coatings industry. The award was first presented in 1985 posthumously to one of RCMA’s visionary founding members, Martin A. Davis, and subsequently designated in his memory.

The Complicated Roof – A Cut and Stack Workbook